Seeing a rugby match live has always been something I have wanted to do. Although it was something I was saving for my upcoming visit to New Zealand, I was happy to experience this bucket list sporting event while in Cape Town. Little did I know I was crossing this off at one of the most historic stadiums in the world.

We had just checked into O on Kloof, a very modern and welcoming boutique hotel in Cape Town’s Seapoint neighbourhood, when we decided to check out a Cape Town Stormers game. We had intended on enjoying our O on Kloof room and the area it sits in but a look at the Stormers schedule proved to be the only night we could catch a rugby match at Newlands. Shame as O on Kloof is a special place. With cozy rooms, an on-site spa, and ocean views from the bar it was hardly the place to pregame from but there we were, drinking champagne while searching out the best way to get to Newlands.

Newlands Stadium is appropriately located in the Newlands area of Cape Town just next door to the SAB Brewery – fitting as we convinced the newlywed couple we had met there the day before while on our Super Cool Beer Tour to join us. Getting to the grounds proved easy as we used Uber. With traffic it came to about $25 from the opposite side of town, a low cost for getting to the worlds second oldest rugby stadium. Completed in 1890, Newlands Stadium has hosted several historic matches including the opening game of the 1995 rugby World Cup – a game South Africa took over Australia.  And now it has the honour of hosting very first rugby match. 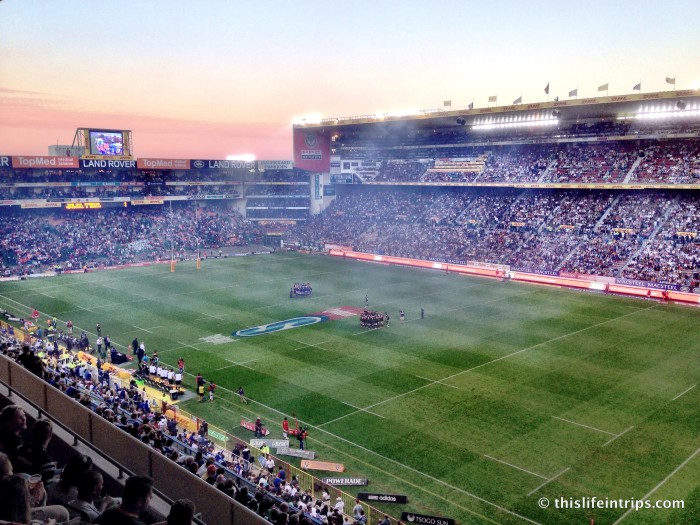 We arrived at the gate to find a lively scene. Colourful fans and beer gardens along with vendors selling braai and street food lined the path to the box office. We waited in line for about 10 minutes to secure our seats, which came to about $10 each. With tickets in hand (and the bubbly from O on Kloof wearing off) it was time for a beer.

I know very little about rugby but I am a sports fan through and through. I’ve been to football games in South America, basketball games in several cities across North America and even have a Super Bowl under my belt (another tick for the bucket list) so how hard could following rugby be?

Thankfully we were seated with some friendly locals that were happy to fill us in (and share their snuck in booze) The game was great with the home team slightly edging the Durban Sharks which made my experience catching a rugby match at Newlands that much sweeter.

Once outside we found chaos trying to get a cab, as you would after any sporting event, so we downed a pint (or 3) at the Slug and Lettuce across the street to kill time and let the crowds disperse.

Tips on Catching a Rugby Match at Newlands

Although I was provided a complimentary night at O on Kloof while I enjoyed my rugby match at Newlands,
the experience, opinions, and hangover was my own.