When it comes to Canadian cuisine, sweet treats are aplenty. From pancakes covered in maple syrup to Tim Bits and sugar pie, Canada loves its sugary snacks and desserts. Arguably, there are none more popular than butter tarts in the east and Nanaimo bars in the west…with Winnipeg somewhat divided.

On a recent trip to Vancouver Island, I set out to better understand what Nanaimo bars are and how they came to be. Let’s dig into the history and find out where the best Nanaimo bars in Nanaimo are.

What is a Nanaimo Bar?

Although I grew up in Canada’s arctic, I was very familiar with Nanaimo bars. They were a frequent treat my mother would make, especially around Christmas time. It never occurred to me that this was likely due to its readily available ingredients in a place where getting anything fresh was not always an option.

Nanaimo bars are made up of three layers; a wafer base consisting of crushed nuts and coconut, a custard middle, and a chocolate ganache topping. No baking is required in making these treats.

There are countless variations out there, especially with the filling. My mother would often make a mint filling and dye it green for effect. All of this is delicious but none of this screams West Coast to me. To better understand its origins, I went straight to the source.

From Vancouver, the seaside town of Nanaimo is just an hour and 40-minute ferry ride across the Georgia Straight. Known as the “Harbor City“, Nanaimo’s past is filled with fur trading, coal mining, and lumber. So how exactly did it get a dessert named after it?

Inside The Nanaimo Museum, there’s a small but great display dedicated to the Nanaimo bar. Turns out, the first recipe representing today’s Nanaimo bar in print is from the 1952 edition of the Woman’s Auxiliary of the Nanaimo Hospital Cookbook. It was simply called “Chocolate Square.“

A year later, this recipe was published in Vancouver‘s Edith Adams Cookbook and called “Nanaimo bar.“ This is the first known publication under the now infamous name. This publication and the original recipe is on display at the museum.

That all said, unconfirmed origins go much deeper. Stories of miners taking these treats to work and even sailors packing them across the Atlantic on steamships are out there. Still, there is no disputing that the city put the treat on the map.

Speaking of maps, Tourism Nanaimo makes searching for the best Nanaimo bar in Nanaimo easy with their Nanaimo bar Trail.

This listing includes over 30 locations in the region and is broken down into categories. These include speciality fillings and flavours, ice cream, and deep-fried. You can even find organic, vegan, and gluten-free options as well as Nanaimo bar influenced cocktails and cakes.

So, Where’s the Best Nanaimo Bar in Nanaimo?

For this visit, I stuck to the traditional recipe. This limited my search down to 10 locations. To ensure I made my 5 PM ferry sailing (and to keep my waistline in consideration) I narrowed the search down to the top ratings found on Yelp and TripAdvisor.

This had me first visit Bocca Café which is located in the unique Old City Quarter, somewhere I have never visited or knew existed in all my years of passing through town. Bonus points on location.

Inside this small café, I was welcomed by a local musician playing the guitar and a display case filled with a variety of bars. Above that case, an award for the best Nanaimo bar in Nanaimo proudly on display. Off to a good start.

I ordered a coffee and the original bar before taking a seat and tucking in.

Before I took my first bite, I couldn’t help but overhear a couple at the table next to me complaining about how sweet their bar was. They weren’t wrong. Still, I enjoyed it with a side of coffee and a short set of acoustic songs.

My next stop was Serious Coffee, a Vancouver Island coffee chain with two locations in town. I chose the one next to the city museum and took the assumption that they get their bars from the same kitchen. Perhaps after having a sugar overload at Bocca Café, I found Serious Coffee‘s bar not sweet enough if that’s even possible. Still, they have great dark roast coffee and is an accessible option no matter where you are on the island.

My last stop was Hearthstone Artisan Bakery. Now, being a no-bake recipe I was sceptical about going to a bakery to get Nanaimo bars. The scepticism washed away on the first bite. Like Goldilocks searching for the perfect porridge, the combination of Heathstone’s custard, crumb base, and the chocolate topping was just right. Also, the peanut butter Nanaimo bar sold me even though I was seeking out the original.

Full up and riding a sugar high, I set sail satisfied that I found the best Nanaimo bar in Nanaimo. So much so that I took a dozen more home with me to share with friends.

Still, there are plenty of places on the Nanaimo Bar Trail left off my list. This made me sceptical. Had I really found the best Nanaimo bar in Nanaimo?

With that in mind, I will happily continue the search as I pass through Nanaimo in the future and I will update this post accordingly. Until then, if you want to make Nanaimo bars at home, here is the OG recipe!

The following is from the Nanaimo Tourism website. It was voted on by locals through a contest in 1985 to determine the definitive and “official” recipe. The winner was Joyce Hardcastle and this is her recipe.

Melt first three ingredients in top of a double boiler.
Add egg and stir to cook and thicken.
Remove from heat. Stir in crumbs, coconut and nuts.
Press firmly into an ungreased 8″x8″ pan.

Melt chocolate and butter over low heat.
Cool. When cool, but still liquid, pour over second layer and chill in refrigerator.

What say you?
Thoughts on where to find the Best Nanaimo Bar in Nanaimo? 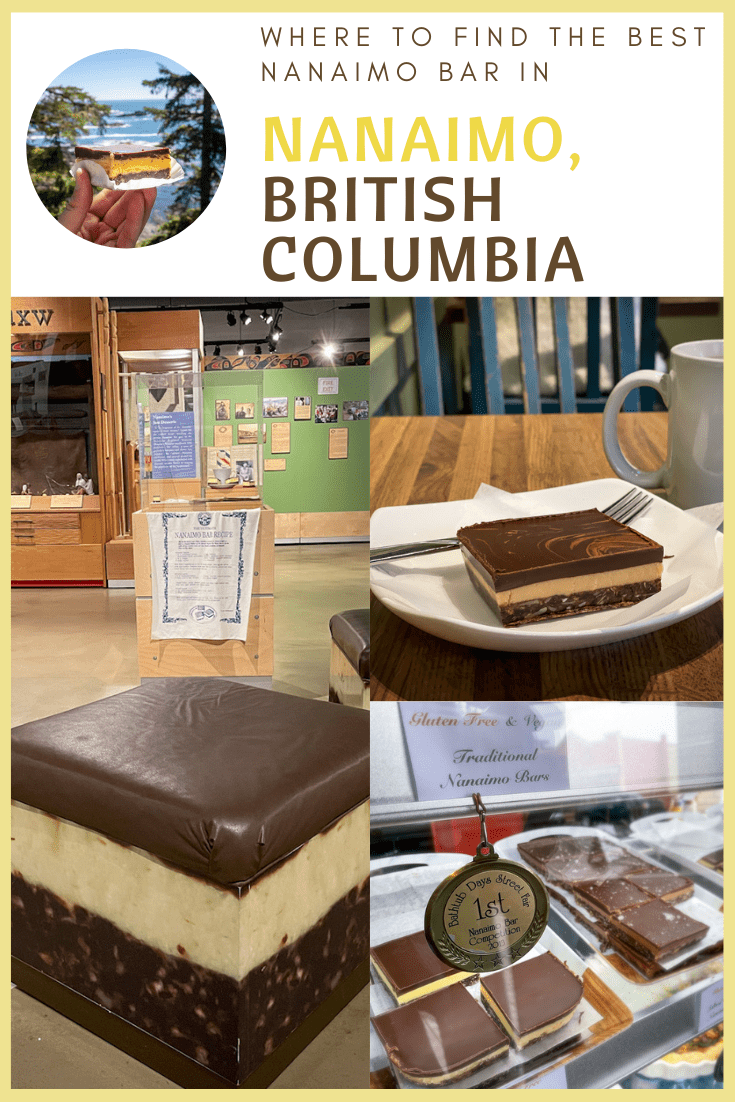 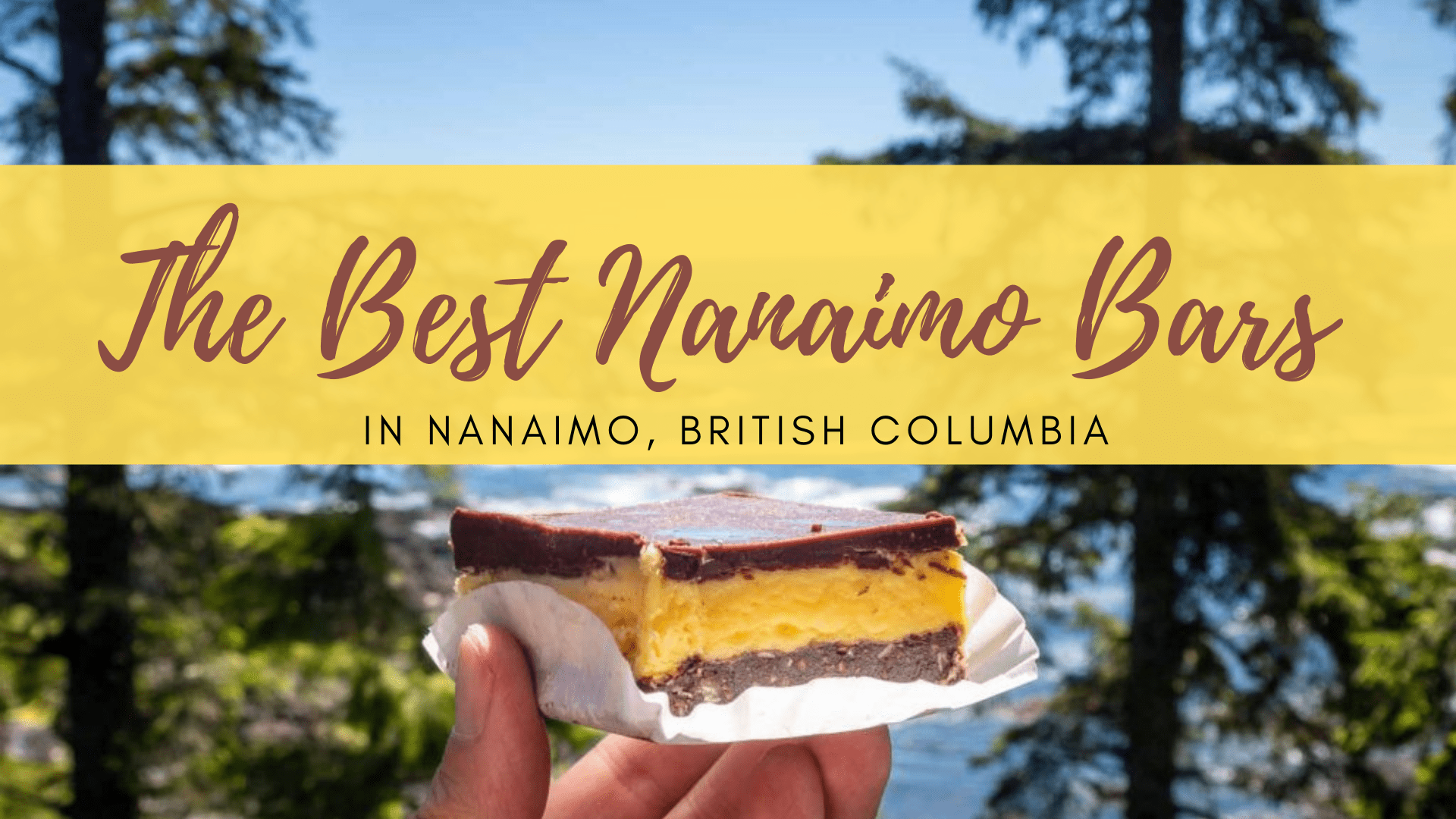 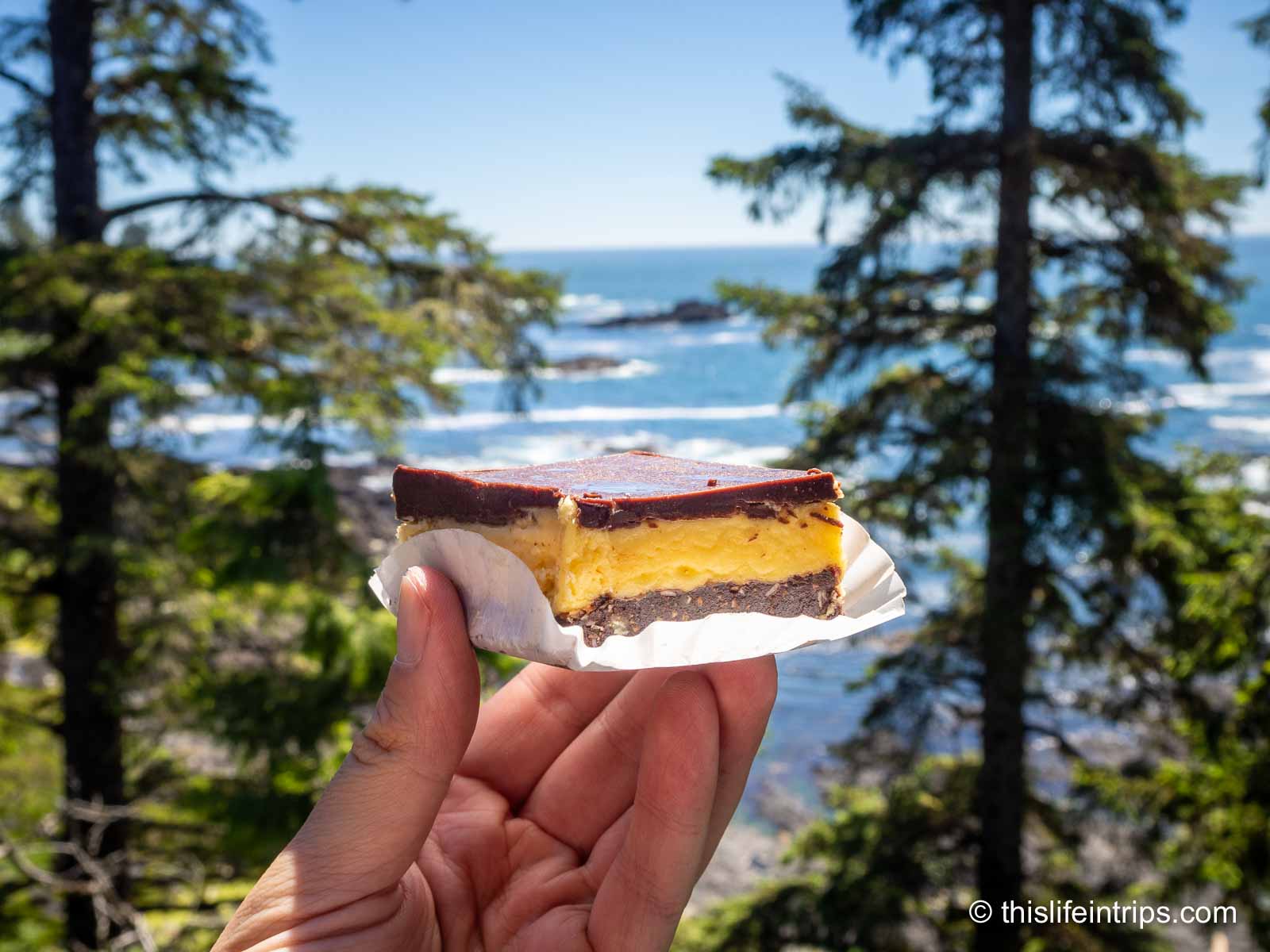