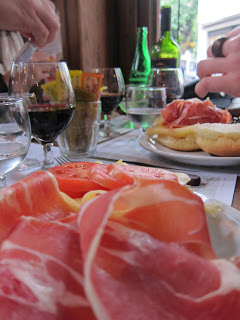 We arrived in the AM to a very cool and damp Bunos Aries. We were not expecting this and our clothing choice for the day and the trip reflected this. To be fair it is fall in the southern hemisphere and we are not so smrt. We arrived to the friendliest hostel I have ever stayed at. One staff member dealt with the taxi driver that over charged us while another showed us around the hostel. Of course our room was not ready so we killed a few hours drinking wine (for breakfast) and eating delicious prosciutto sandwiches…thus begins the gastronomical tour of South America.

We returned to our hostel for a brief 45 minute nap before heading out again. We were lucky enough to be in town when one of the most famous football teams, the Boca Juniors, were playing. It was unfortunate that they played shortly after we took a 10 hour over night flight but worth it in the end. The tickets were pricey but included pizza, cerveza and Erin´s favorite, security. We met up with a bus load of gringos and headed to a seedy little bar near the stadium where we were taught local Boca chants, fed and given bottomless beers. The quiet group quickly became best friends and so began the Boca Junior experience. 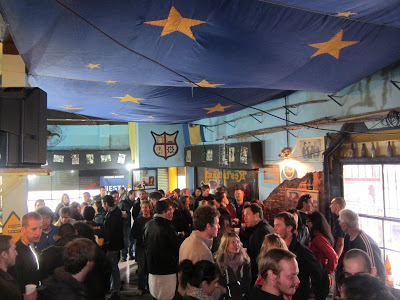 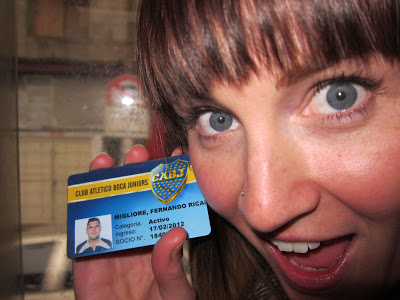 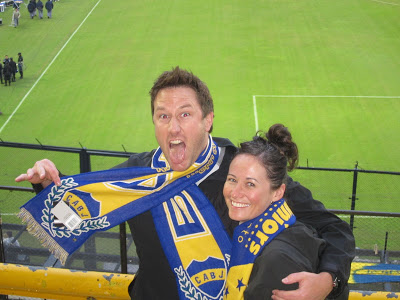 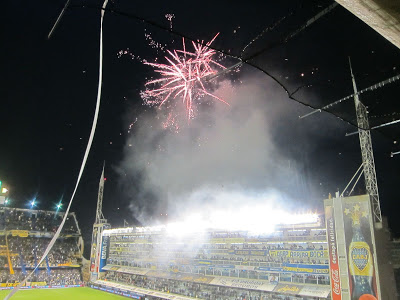 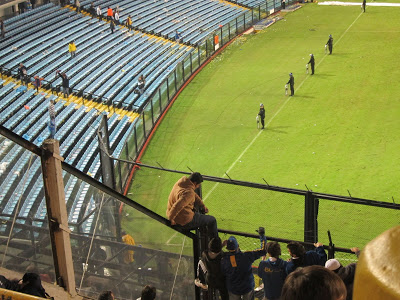 We arrived a good hour before the game started to avoid any mingling with the visiting team fans which shared the same entrance as our seats and occupied the section above ours. We were each given ID´s of club members (the only way to get into a game) before heading through what would later become the tightest security we would encounter on the whole trip (including airports) Once through we handed the cards back to our escorts. For that brief period I became Esteban Gabrie Fuentes. Hola.

We were definitely early but that gave us time to settle into our concrete seats (which are not used for sitting) and watch as the stadium filled and came alive. The section directly across from us filled and began chants so loud that it shook the stadium. Goose pimples. This section did not stop for the following 3 hours.

We were treated to a pre-game fireworks show that rivals any small city Canada day celebration before the match started. By this time the rain started and the temperature dropped. We were not dressed for this (especially the girls) but hung in there and enjoyed every minute. The visiting team had several chances (including a shot off the cross bar) before the home team scored what will be the best goal and celebration I will ever see live in my life:

This would be the only goal of the night but worth it. The rest of the game was filled with chants, songs, and yellow and red cards. The ref looked like he was about to fight the entire Boca team himself and was very one sided in his calls. Fortunately for him Colon, the visiting team, did not score and his life was spared.

Post game we had to wait what felt like 3 hours for the stadium to clear out, again to avoid any confrontation with the visiting team fans. At one point late in the second half I went to use the bathroom and was met with a lineup of riot police. They eyed me to make sure I was not leaving the section. The locals that did not want to wait to use the exit climbed barbwire fencing to get around. Although by this time Erin´s lips were blue, we opted to stick with our security.

Even though we were exhausted by the experience and the day of travel we managed a couple night caps at a pub near our hostel. Much needed rest followed.