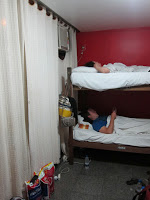 Finding a cheap place for 4 people to stay in Rio was a bit of a challenge. Everything nice, clean, and cheap was non-existent. Everything in the good area was old, dirty, or expensive. Everything we had read or head about RIO had us terrified to stay anywhere but Ipanema. Downtown? You will get mugged. Copacabana? You will get scammed. After weeks of looking I settled on a party hostel a block off of Ipanema beach and when we arrived late on a Saturday night we found that it was just that. The lobby was actually a bar and our room was right above it. It wasn’t that bad but not ideal. Perhaps spoiled from the previous two stays at luxury hotels, the girls weren’t having it. I struggled with it for a bit as I knew for the price and area we were not going to find anything. Being our last stop I was warmed to the idea of upgrading. The female cook staff yelling in Portuguese from the bar kitchen next to our room at 8:00 am convinced me moving was a good idea. With that we went from rags to riches in Rio moving to a beach side 5 * hotel, going from $20 to $250/night in a 1 block move. Caipirinha to Champagne. 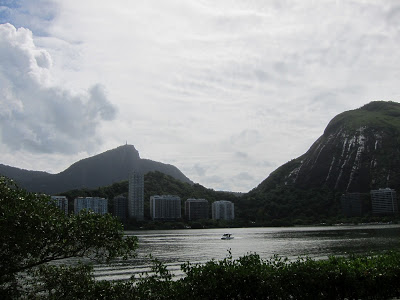 While waiting for our rooms to be ready we went in search of bikes to rent for a couple hours to cover some ground. Lost in translation was the location of said bike rentals as the staff at the hostel pointed in a direction and said there were many places to rent bikes, or so we thought that was what she said. I have said this before, as English speaking travelers we are very spoiled. Brazil, with the majority of tourists coming from Europe, is less English friendly than most South American countries. This was humbling but good for us to struggle a little. We walked half way around the giant and scenic Lagoon before making our way to the ocean side. I was taken back by the amount of  People, of all ages, jogging or exercising on the outdoor city provided workout equipment. I was also taken back by the lack of dog shit on the side walks. So far so good Rio. 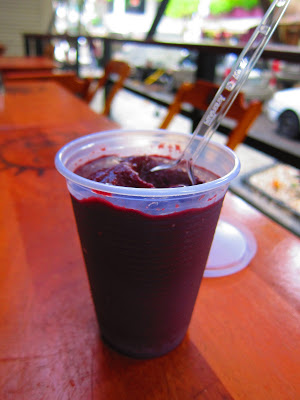 We enjoyed a cheap and delicious breakfast of ham and cheese pastries with a side frozen acai berry. This meal would become our go to for the next couple days.

We walked the whole length of Ipanema and enjoyed games of footvolley, a volley ball game played with your feet (originated in Rio when soccer was banned!) and guys in speedos doing the splits. The view of ridiculously tanned and fit people went for miles. Definitely made me think of Homer strutting his stuff in Rio.

Once we hit the end we turned around and headed for our waiting hotel rooms. In retrospect we should have enjoyed the sights a little longer as the busy beach was only alive because it was Sunday. In my mind that was any weekday. Our hotel rooms, although nothing special, had amazing ocean front views and came with a rooftop pool that was well used by us and made the upgrade worthwhile. Pool side and Beach side Caipirinha (a refreshing Brazilian cocktail) were consumed while watching the afternoon sun fade. Many pool side Caipirinha happened. It was a rough day. 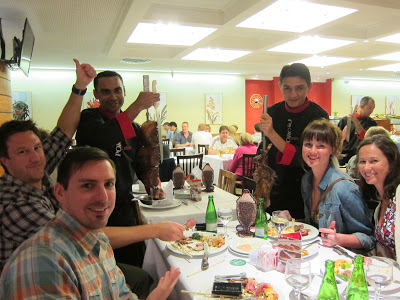 Diner that night was the best we had on the trip and probably my personal highlight over the whole trip. Move over big Jesus, Porcão is the new #1 tourist attraction in town. This all you can eat (and then some) churrascaria (Brazilian style BBQ) is a serious gastronomical attack…literally. Men with swords of varying delicious and perfectly prepared meats assault your tables until you surrender. You are actually given a card with a green “Sim por favour” and red “Nao Obrigado.” Even with the red stop sign visible the waiters still try and carve off more meat on to your plate. Kinda like your grandmother would do while saying how skinny you are. IT. WAS. AWESOME. 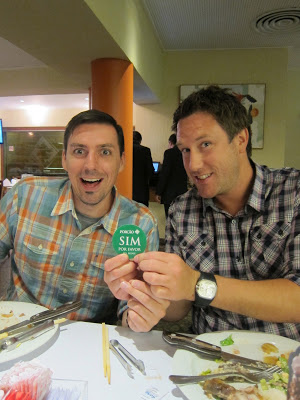 On top of the amazing meats there was a salad and sushi bar that was top notch. Pair that with an amazing bottle of wine and you have my heaven. Mmmmmm blue cheese crusted sirloin on a stick…. My mouth is actually watering as I reminisce and type this. Must. BBQ. Something…and slather it in chimichurri. Caipirinha to wash it down later.

Will finish up Rio once craving subsides.