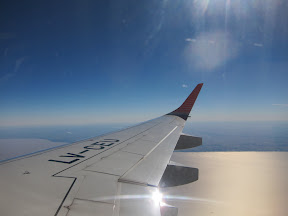 Tight connections, the only way to fly.

O ur original flight from Montevideo had us sitting at the BA airport for 4 hours before our connecting flight to Iguazu Falls however when we checked in we were told our flight was over sold. On the upside we could get on a flight that left BA 30 minutes after we got in but would be a very tight connection. Sold. When we landed in BA we were met by an airline agent who quickly rushed us through customs then security, pulling us to the front of the line each time and took us straight to our gate. It was awesome. No waiting around for these guys, we are kinda a big deal. Yes, tight connections, the only way to fly indeed. This would later bite two of us on the trip. 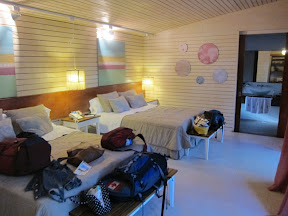 Corner of Smog and Smokey

We arrived to a very tropical and hot Iguazu. It was odd to be moving north to get hotter weather but we gladly took it. We checked in at our very posh jungle lodge and were happy to find the cabin we booked was as nice as described. It also included the worlds smallest hot tub which we would later take advantage of. 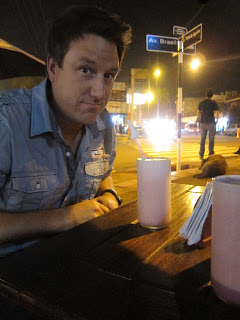 Arriving earlier than expected we decided to head out to see the Brazilian side of the falls but were told we didn’t have enough time by the staff at the hotel. How big are these falls? We hung around the pool before heading into town to see what it had to offer. The small tourist town was just that. We wandered the streets looking at tourist shops that all looked the same and found that the town was more or less shut down. It was 4:00 pm. To kill time before having diner at a restaurant that didn’t open until 8:00 pm we had drinks on a patio. The special of the day was grenadine pina coladas. Sounded good. We waited a 15 minutes for our drinks and realized our seating choice on a busy street corner was not the best. The heavy traffic fumes mixed with the smoke from a near by asado was a bit much. Our neon pink drinks arrived and tasted like they were made with pepto bismol. They were horrible. So there we sat, drinking our pepto colladas on the corner of smog and smokey. 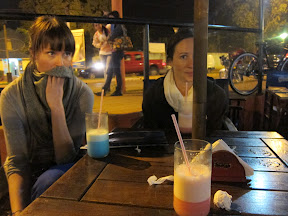 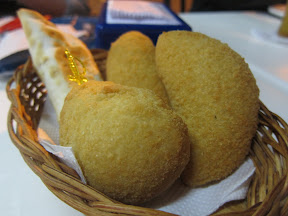 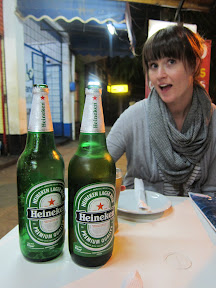 Our diner proved to be a vast improvement. Deep fried empanadas for $1 each and a calzone the size of a CFL football. Paired with a couple giant heineken made it a great night.

The next day we made our way to the falls on the Argentina side. Our driver said he would be back to pick us up in 7 hours. We laughed and said we would call him to pick us up earlier as we thought that would be way too much time to spend looking at some water. It wasn’t. For 7 hours we wandered the trails leading to different vantage points of different falls. Each trail led us to something more spectacular than the last. Words can not describe the falls. We continuously wondered if they were real as it looked like something out of a movie. Indian Jones and the Kingdom of the Crystal Skull perhaps? 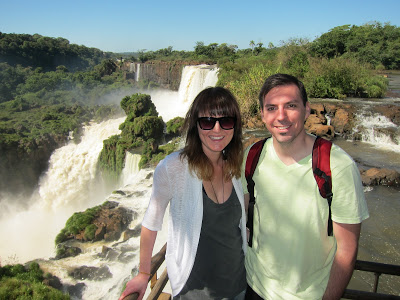 We started with the upper falls getting amazing views of the area below. Next was the lower trail bringing us to the base of several of the falls. A short boat ride brought us over to an island where we had the most scenic picnic lunch I may ever experience. The island gave an amazing view of the falls we had previously walked above.

Our last stop was the Devils throat, the epicenter of the largest falls.  A short train ride took up to the top where we took a kilometer walk on a raised path above that brought us over the river. The width of the river makes you realize why the falls are so grand.

Once again, words can not describe the site from above these falls. The rumbling sound and the mist was hypnotic in a way. Again, unreal.

Exhausted from a day of hiking in the sun we opted to float our way back down the river, ensuring to stay left on the way.Back at the hotel we took in diner and a show by what was explained to us as “Argentina’s version of Jimi Hendrix.” Full from a good show and plenty of wine the night got a bit blurry. Cigars, wine and a tiny hot tub followed. Off to Brazil next.