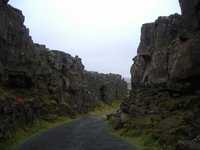 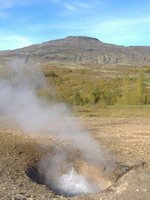 What we could have done over the last 3 days, we did today thanks to a self guided tour of the Icelandic Golden Circle.  Iceland is so wild…so very wild. Glaciers, Geysers, waterfalls, volcanoes, craters, and thermal spa’s. Iceland has a lot to see and we saw it thanks to driving the Icelandic Golden Circle. We got up early to get as much of the day in as we could. Actually Scott didn’t really sleep last night as I got him going on business ideas which kept his brain going…that and the guy sleeping above him had not heard of hygiene and also farted all night. I have been in a lot of dorm rooms over the past 8 months but that was the foulest, thanks to sideburns above Scott. 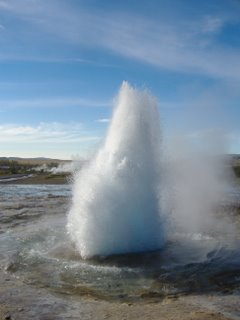 We made our first stop at a spot that is said to be where the North America and European continental plates split. This valley we walked through actually widens every year. Again, I find this stuff neat. 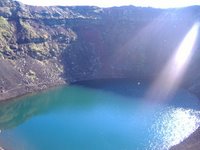 Next was a field of geysers which was coooool. Scott described it as “earths indigestion” as it bubbles and gurgles before exploding. Makes you wonder what the Vikings thought when they saw these boiling pools of water for the first time. “ Hey Leif…ahhh yeaaahh…you might want to check this out”

We then drove down the road to the Golden Falls which are the highest falls in Europe and are spectacular. From there we could also see some glaciers on the horizon.
After hiking around the falls we headed towards the coast. On the way we stopped at an unmarked site which turned out to be a collapsed volcano which is now a very cool looking crater – one of my favorite spots on our Icelandic Golden Circle tour. We hiked around that then continued to the coast. 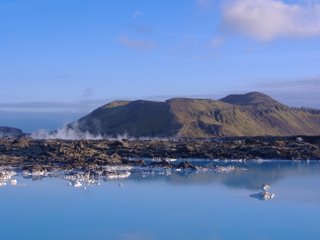 After stopping for salted fish, a traditional Icelandic snack, we stopped at the coast where there is a huge lava field. It was low tide so we made our way out through the bizarre rocks and seaweed.Next stop on our Icelandic Golden Circle tour was a beach that was made up of volcanic ash which is basically black sand. A very odd site. Must get so hot in the sun. We walked out in the sand then were back at it, making our way towards the blue lagoon. The landscape and scenery was out of this world as we took an off road trail in our tiny European rental car. With its bicycle tires, we banged our way through what looked like the moon. Craters, steaming hills and boulders, it was unreal. At one turn we came across a field of Inukshuk looking rock figures. It was spooky and looked like a burial ground. We stopped and added our sad looking figure to the group and then carried on through the moon-like terrain.

Just when I thought the Icelandic Golden Circle natural beauty couldn’t surprise me anymore, we arrived at the Blue Lagoon. It is a natural volcanic rock outdoor pool that is filled with natural beautiful blue/turquoise water. It takes the cake when it comes to outdoor hot springs…by far. It is so different. We enjoyed a long, hot soak and a silica mud mask. (I swore that would never leave Iceland so that’s between you and me) I fell asleep and woke up with soft, but raisin like skin. It was fantastic, a great way to end our Icelandic Golden Circle day in one of the coolest and hottest places I have ever been.