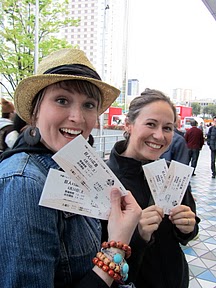 Heading back to Tokyo was an eye-opener. This leg of the trip was sadly coming to an end.Wanting to stretch it out a little more we tried to make a stop in Hakone to get a closer look at Mt.Fuji. An unfavourable train schedule made it a little tricky to pull off so we continued on. Instead, we continued on to what would turn out to be a great day of baseball, babies, and men in diapers. Any dejection from the potential detour was washed away when we saw that the Tokyo Giants were playing that night. Seeing a baseball game in Japan was high on my list of things to do and seeing the Giants, Japan’s most popular team, made it that much better.

We arrived at the Tokyo Dome just before the opening pitch and were able to get standing room tickets. I had been to a few NHL games with standing room tickets and it was always a designated spot with excellent views and had something to lean on or rest a drink on. This, however, was not the NHL. We spent a few minutes trying to find our “seats” then realized that the thousands of people in the hallways were looking for their “seats” too. It was pretty bizarre. Many of the people in the halls had set up nicely on the floors surrounding the in-house televisions. Kind of defeated the purpose of being at the game. We figured with our height advantage we should be able to get a view somewhere so we circled the stands and settled on a spot in right field. None of us were really in the mood to stand and barely see the game for 3 hours so we decided to give it a couple innings then head out. Eight and a half innings later we were drunk, cheering and yelling God knows what, and high fiving locals. It was a blast. The crowd gets so into the game with animated and choreographed cheers and chants. It is contagious and impossible to not get involved. Mix in beer girls dressed in 1930’s baseball uniforms with kegs strapped to their backs and you have got a great time. Replace hot dogs and cracker jacks with edamame and sushi and it becomes a truly unique experience. 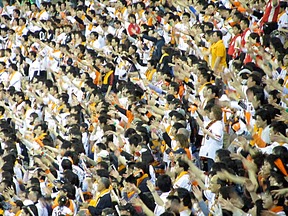 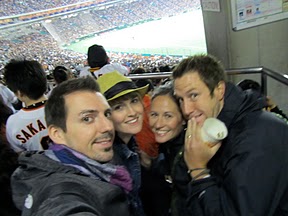 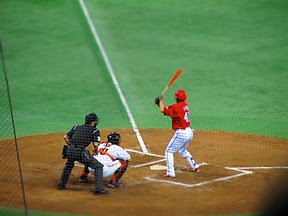 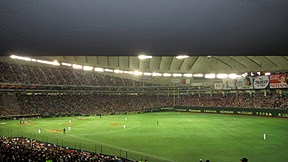 We left the game in the 9th inning in an effort to beat the 55,000+ crowd. The Giants had tied it up at 2-2 with the Hiroshima Carps. It was hard to leave the game as it was very good.

We made our way to Shibuya to find something to eat and ended up at a place sharing a large table with a group of locals. We ordered a feast. It was a nice last super. A brief game of quarters broke out but thankfully not enough to make me run off into the Tokyo night.

Another failed attempt at going to the fish market followed. 5:00 am was not appealing to any of us, especially to smell fish after a night of drinking. Instead, we headed to the oddest Japanese tradition I am sure to ever experience…sumo wrestlers making babies cry. No joke. Giant, fat, men in diapers (men in diapers!) yelling and shaking newborns until they cry. It has been a tradition in Japan for over 400 years (that is a long history of men in diapers!) and is said to bring good health to the baby and laughter to the audience. There are even referees to judge which baby cries the loudest and longest. At some points the refs joined in, dawning scary masks and shouting a not scary at all chant which sounded like “Nuggie, nuggie, nuggie!” This was amazingly bizarre and great to see. 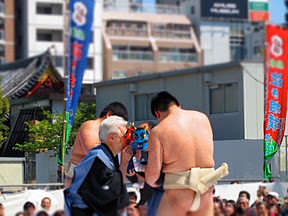 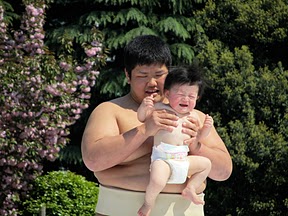 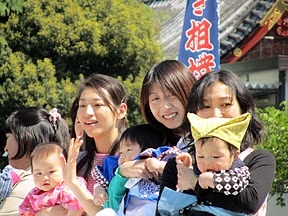 Being able to check off baseball and men in diapers/sumo wrestlers (sort of) was very satisfying. I was a little less sad to be leaving this strange and amazing place. We strolled the Senso-ji temple one last time before heading back to our hostel to collect our bags. It was odd that our Japan trip started and ended at the same spot. We had come full circle. 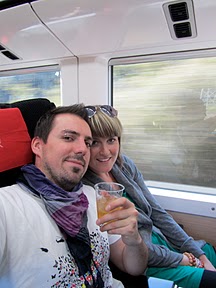 We finished off a bottle of plum wine on our train ride to the airport. The wine would help with the night flight to Honolulu. Perhaps sensing our sadness of leaving Japan Alison said: “Anyone want to go to Hawaii tomorrow?” Yes, yes I do.