That Day I Hung Out With A Monk

That day I hung out with a monk, an 83-year-old Thai lady, and the 20-something year-old that ties them together. “What is something I never thought I would say Alex?” What seems like an oddly phrased Jeopardy question has become one of my favorite days while in Thailand. When Matt, our gracious host at The Nest Koh Samui, offered us an outing with this odd mix of friends I was intrigued to say the least. So much so that we ended up extending our stay in Koh Samui so we could tag along. It’s not every day you get your own local tour guide to take you around let alone one that has lived there for the better half of a century and has a monk as a friend. Sold. 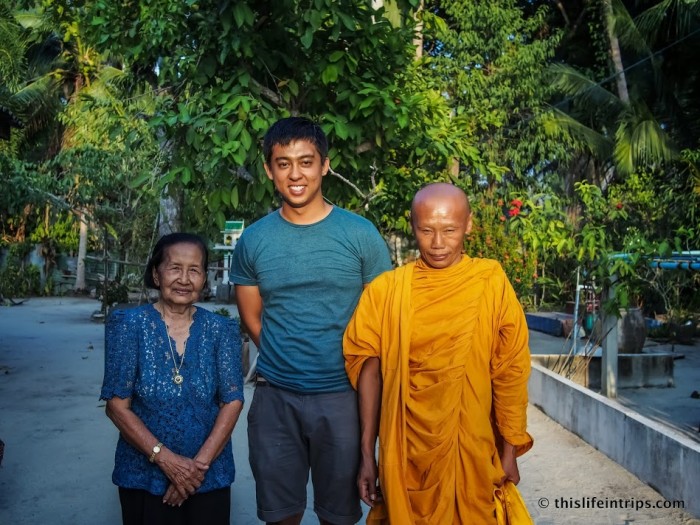 Our day started out by picking up a feast for the five of us to enjoy. Matt has made it a regular occurrence to bring food to Yai Mint, an elderly Thai lady who lives on a quiet corner of Koh Samui. Matt knows this vibrant 83 year old women through Luang Pee Fon, a monk that Matt befriended while he was studying to become a monk himself. All though Matt did not end up becoming a monk, he maintains a friendship with Luang Pee Fon and I was excited to see them interact. I knew nothing about monks before that day so I was completely naive on what to expect. Luang Pee Fon did not make it easy at first. He is very stern looking and we were already warned by Matt that he can be a little bit “grumpy.” A grumpy monk? What does that even mean? We were cautiously excited to find out. 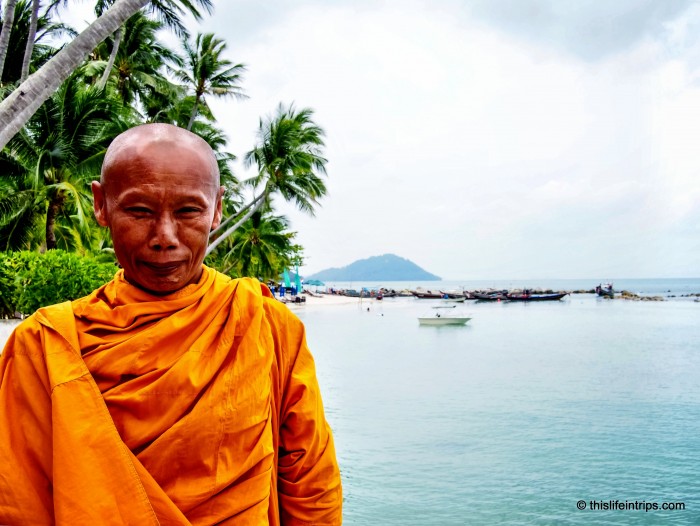 We ate in near silence. I couldn’t help but think that Yai Mint and her monk friend thought that they were a spectacle for us, which in turn led me to feeling a bit uncomfortable and guilty. So very Canadian of me. This was quickly relieved when I choked on a seriously hot pepper. They chuckled and chatted to themselves in Thai which made me realize that we were just as interesting to them as they were to us. Relaxed, (sweaty and beat red from the spicy food) we chatted about the house, her neighbors, and what was in store for us that day. 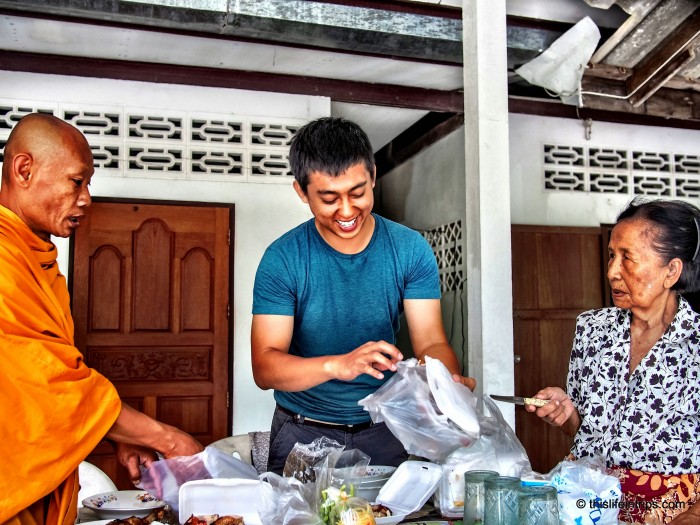 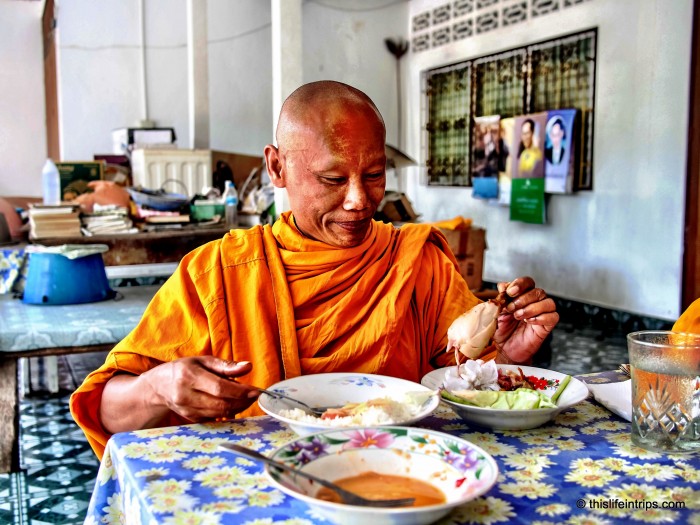 Yai Mint welcomed us into her home and shared stories of her past. We learned that she was quite the catch back in the day. Her kind eyes and smile says she still is. We listened as Matt translated entertaining stories of men fighting over her while she shared pictures of herself in her younger days. Her generosity and desire to help others is a true example of her warm heart. She devotes her time to helping others, donates to charities, and works at various temples. Her generosity is how she met Luang Pee Fon, a troubled man looking for a fresh start. 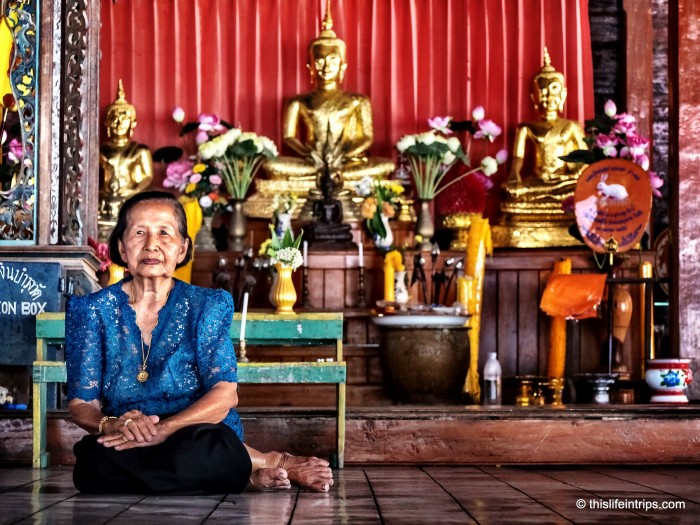 Luang Pee Fon had lived a different life than what he does now. A past filled with crime, drugs, and regret led him to becoming a monk and ultimately, a do-over. It was this life decision that led him to Yai Mint, the only one that would sponsor him while he started to become a monk. Their relationship has grown into something special. They laugh and joke like only long term friends do. She mothers him and he provides company, friendship, and I can only imagine assistance when needed. 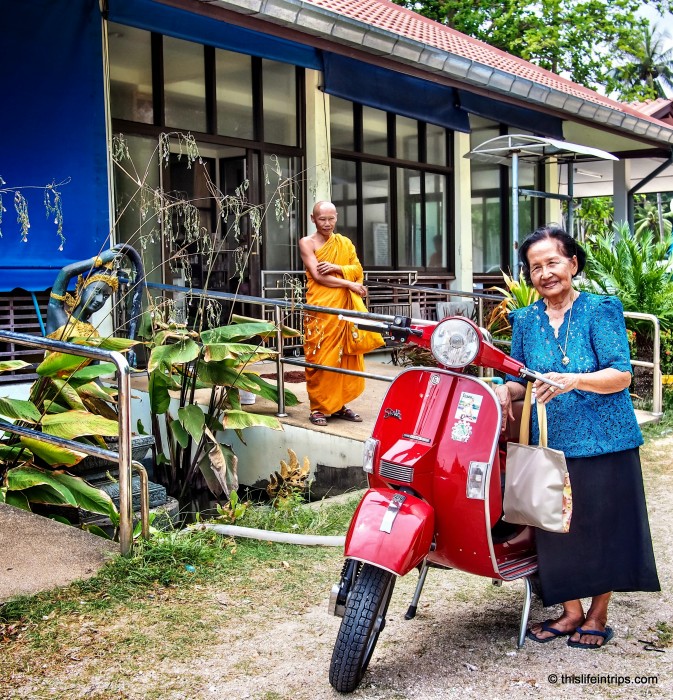 Our day continued with a visit to several temples and shrines – one being where Yai Mint’s father was once in charge of. We were given a tour and shown around which was great. The grounds provided a beautiful backdrop for some photos, something that Yai Mint and Luang Pee Fon were used to. Matt, an amazing photographer, has clearly worked with these two before as they happily posed for pictures and even suggested I take more of them. Camera shy they were not. 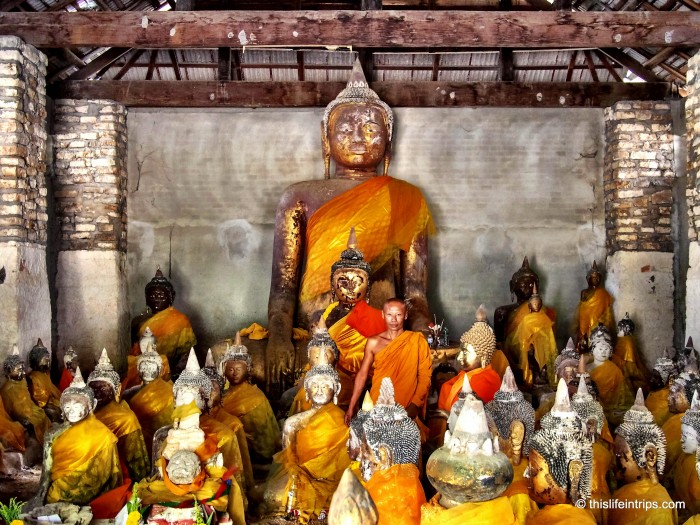 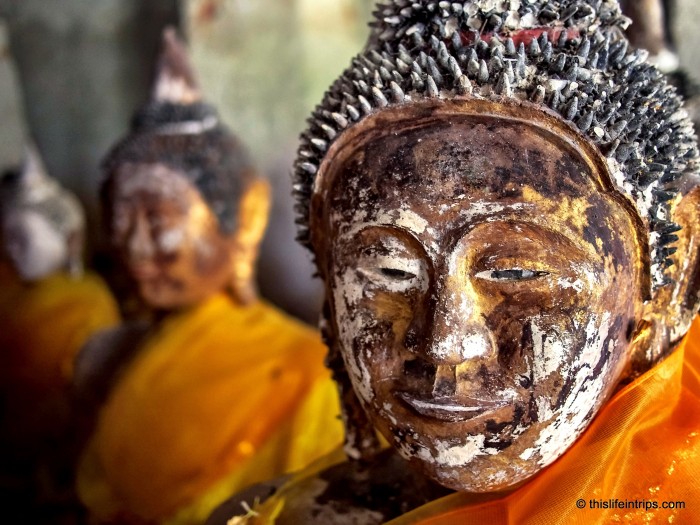 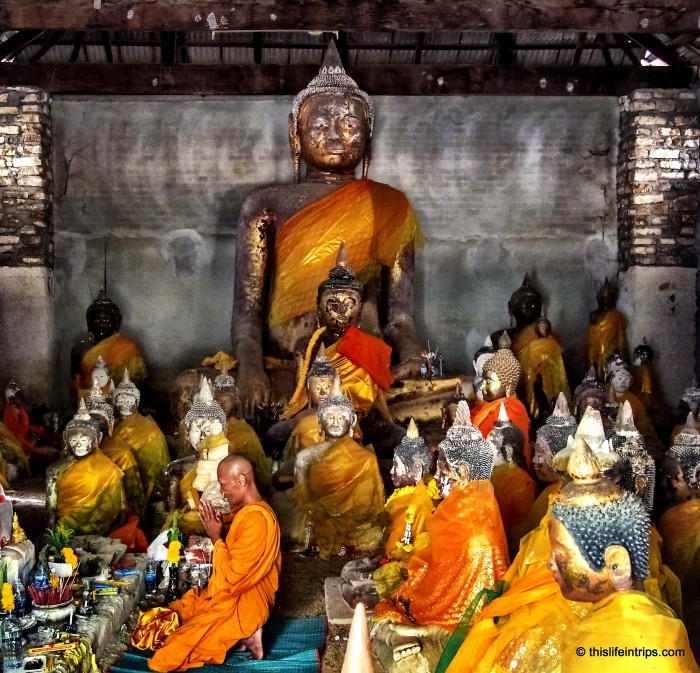 We moved on stopping at the famous mummified monk at Wat Khunaram and learned about the various methods of paying respect and praying for good fortune and health. It was especially fun as we took turns attempting to achieve the perfect pitch on this gong like plate that you play with your hand. 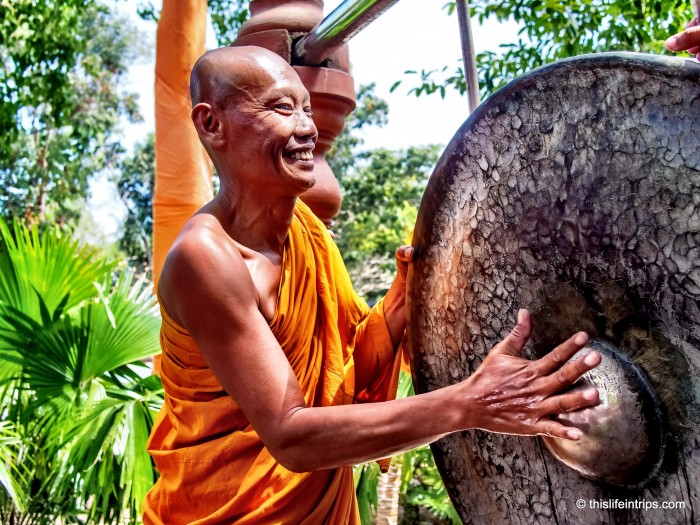 Our temple tour ended and we headed into town to run some errands. Yai Mint needed a few things from the store so off we went. She linked arms with Erin, whom dwarfed her frail frame, and headed for the supermarket. Not something you see everyday, nor is going for iced lattes with a monk which is what we did next. It seemed all too odd to me but that was just me being naive to what being a monk actually meant. Matt explained that once you become a monk you give up all your possessions including money and are not allowed to own anything in an effort to avoid distractions. Our next stop provided a heart warming example of this.

As we made our way back to Yai Mint’s house we made a sudden stop where Luang Pee Fon quickly hopped out. Confused, I asked Matt where we were. We had stopped at a friend of Luang Pee Fon who took in his dog when he became a monk. Man’s best friend is considered a possession and he had to give up his pet in order to peruse his vows.  I grabbed my camera and hopped out as I was curious to see this reunion. The dog sheepishly came out of hiding, head down and tail tucked between its leg. Once she saw who had come to visit her tail began waving feverishly and she began whining in excitement.  For most of the day Luang Pee Fon was quite stern and a bit reserved. That is until his pooch jumped into his arms. The absolute joy and love between dog and man was heartwarming to say the least. This was one of my favorite moments from my whole around the world trip and am so very glad I was there to witness and capture it. 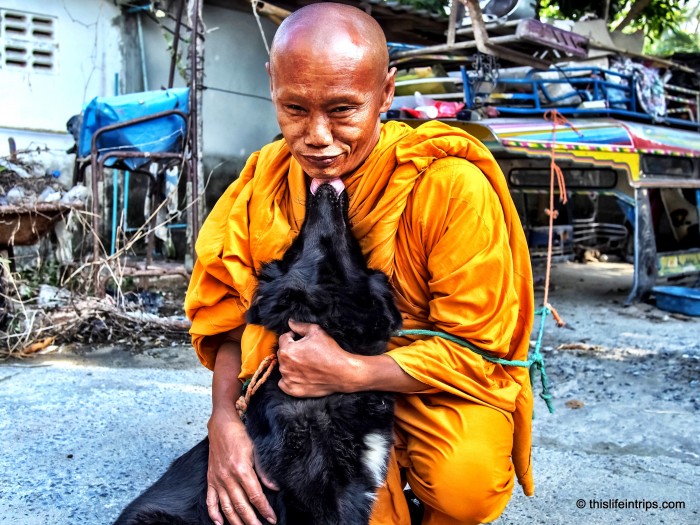 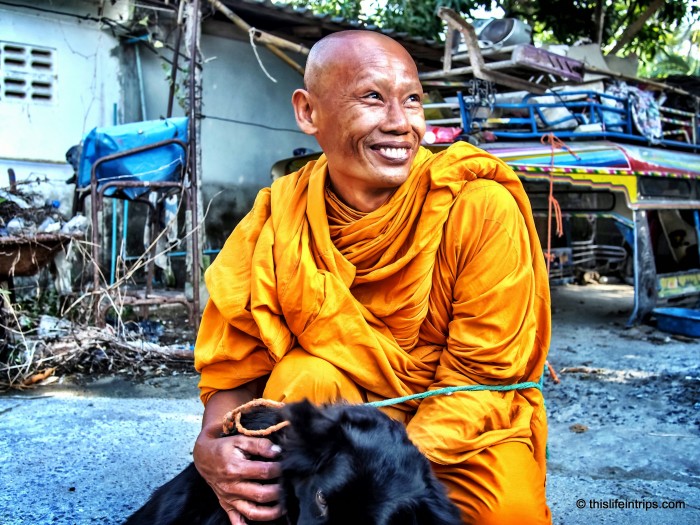 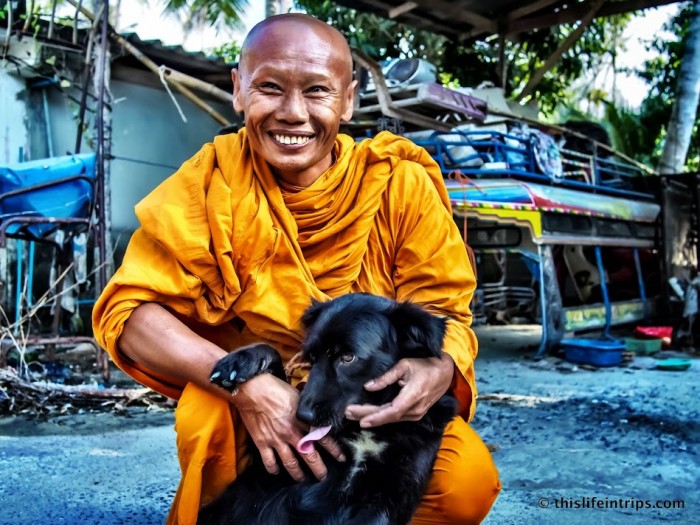 We arrived back at Yai Mint’s house where we were treated to fresh coconuts harvested from her property. Stuffed from the feast earlier that day we politely drank the large coconuts. Like a grandmother saying you are too thin, Yai Mint insisted we finish the water and then the ample meat inside. Ugh. Feeling it was impolite to ignore her request we pushed on. 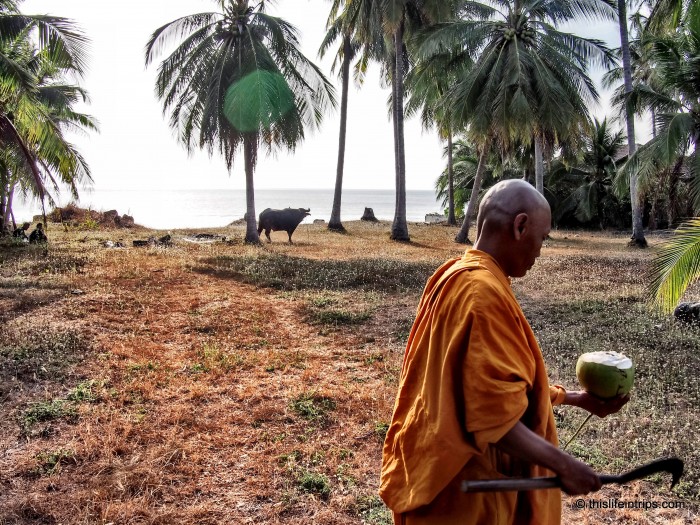 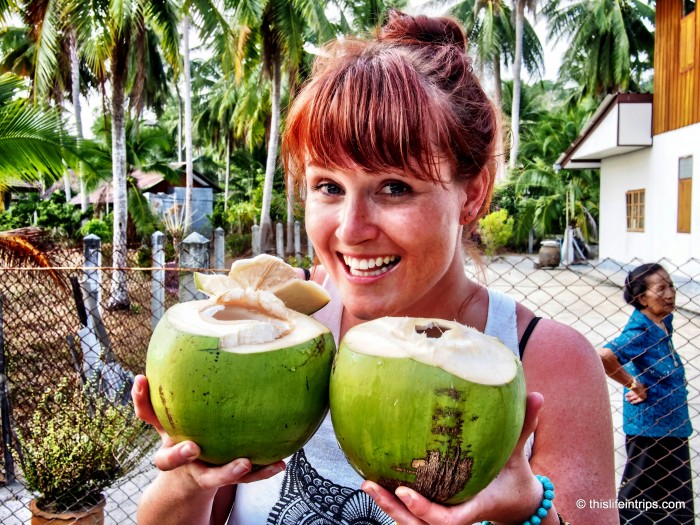 Our new friends provided us with some charms as something to remember our day together. It was an amazing gesture and along with the photos taken throughout the day it will provide memories for years to come. It was an interesting visit to say the least but one that will far outlive any day spent on a beach or night of mindlessness had while visiting Thailand.

For this I am truly thankful for and will never forget. 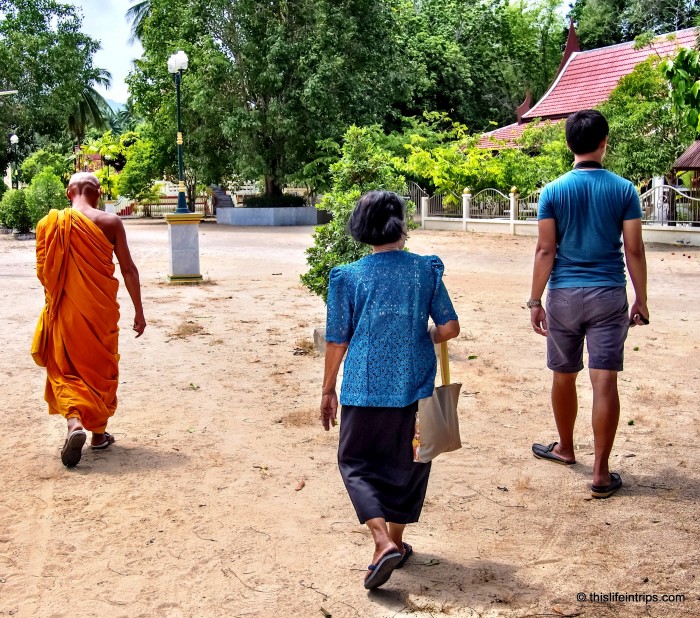