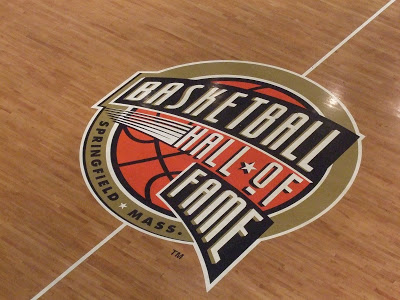 Another short night’s sleep and we were back on the road. My flight back to Edmonton was at 8:55 pm so we were out of Boston by 10:30 AM. This really didn’t give us much room for error as the drive is over 8 hours. We certainly didn’t have time to stop in Springfield Massachusetts to go visiting the Basketball HOF. We did anyway.

It was pretty hard not to stop as we passed the sign advertising the hall. Also on a weekend of boy hood dreams – Visiting the Basketball HOF was on the list. We gave ourselves an hour which was really starting to push getting to the airport in Toronto in time for my flight. We rushed through skimming most of the content but ensuring to leave enough time to hit some 3’s on the court in the middle of the hall. 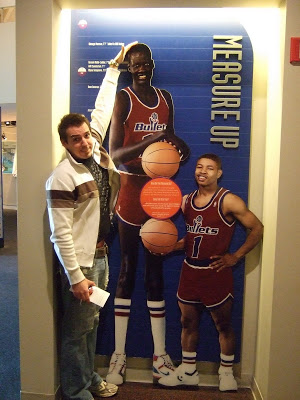 Back on the road and now very rushed we almost ran out of gas in up state New York. Miles are hard. We made good time only to get held up at the border in Buffalo. Nutz. I called Air Canada to see how much to change my flight, $40 + a new ticket which on short notice worked out to about $530. Double Nutz. That’s when the attendant on the phone told me there was no 8:55 flight to Edmonton from Toronto. Turned out I was wrong and was booked on a 10:55 flight which gave us more than enough time. Even with the 2 hour delay at the border I was still very early for my flight. Its funny and a good thing I thought the flight was earlier because had I known it was a late flight I probably would have spent more time in Boston and at the Hall of fame which would have made me miss my flight due to the long delay at the border. Funny how that goes.

Visiting the Basketball HOF for the win.