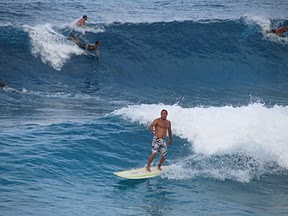 …And by more active I mean more chicken wings and video trivia. Oahu Food and beer, beer and food indeed. We ended up at the same pub for the second straight night but not before packing in a busy sun soaked day. We headed south for some snorkeling at Hanuma Bay. This beautiful nature

preserve has seen its share of visitors. Over a million people a year snorkel these reefs which is evident once you see the brown dead coral below the surface. Still, for a first time snorkeling experience it was very cool. There were many different species of fish and a few sea turtles that had no issues with you swimming next to them. It was pretty neat to lazily play in the surf with a sea turtle swaying back and forth with you. No pictures of this amazing time. As I learned the hard way, my camera does not like salt water. 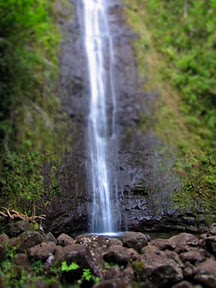 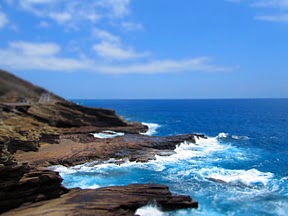 We spent the majority of the day pointing odd looking fish. Waterlogged, we continued around the south tip of the island stopping at a couple scenic points along the way. We also watched locals play in the waves. It is baffling to me how they do not run over each other.
On the way back we cut across the island and stopped at Mona falls for a sunset hike. Returning
through the jungle at dusk was not ideal nor the plan but was nice to see and do. Sweating out a weeks worth of over sized and deep fried portions became a necessity. It was also nice to see Allison bolt at the sign of darkness leaving us all behind. The friendship lines had been drawn that night as her true colors came out. 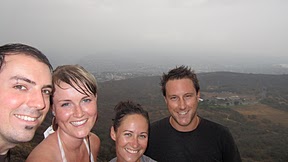 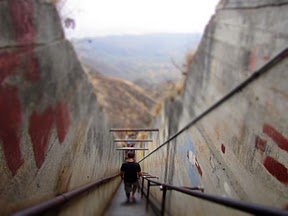 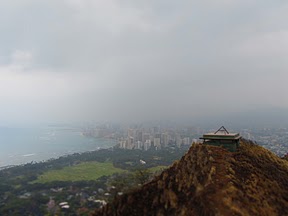 The next morning we headed to the flee market for some cheap souvenirs. So many bad flower print shirts in one place. After that we took a soggy hike up Diamond head to work off the Oahu food and beer. It was the first day of rain for us and was conveniently on our last day in town. The hike was great even though we were all wearing flip flops. Stairs are fun. At least it was neat to be inside a crater. Check.

The last thing on our Oahu checklist was to eat some local food. More Oahu food and beer please. No, not spam. A roasted pig kept coming to mind. The place we had read about happened to be closed that day and we hadn’t had much luck asking locals for their advice. The night before we ended up eating pizza and drinking in our hotels hot tub. Gross but fun.

When we asked a clerk at the corner store for a local pizza place recommendation she said “Papa John!” in a high pitch excited squeal. “No, something local.” we replied. “Papa John?” she said again, this time with a confused look on her face. “Nooo something local. Not a chain.” She paused. “Ohhhh…I like Papa John.” 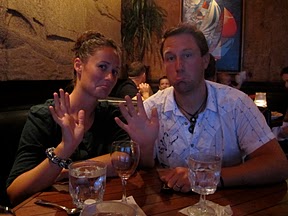 So when it came to recommending a restaurant most people suggested a chain or the same seafood place around the corner from out hotel. We gave in and feasted there. We took our time eating and saying our goodbyes. Our month long trip was coming to an end and I don’t think we were ready to go home yet. We had, what I thought was, a midnight red-eye flight home so we had, what I thought, a lot of time to get to the airport.

A panicked and rushed trip to our gate to follow…