And then there was Hawaii. 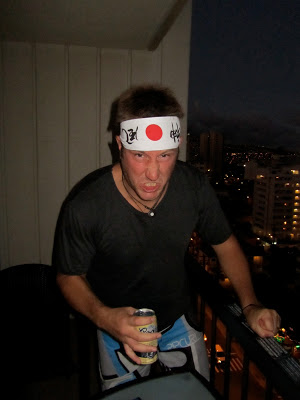 Not that its a bad thing or to shrug it off but after being immersed in foreign culture for a few weeks, Hawaii was a little too familiar. After all it is Amerrric-uh…land of the free…and the chili dog.

We arrived at our Waikiki Hawaii beach front hotel exhausted from a combo of an overnight flight and the past few weeks. Justin and Alision were without a place to stay as Allison’s sister, who was supposed to meet us there and had a condo rented for them,was unable to make it. We snuck them into our room which was huge so didn’t cramp our style…much. Erin and Allison were a little more exhausted then Justin and I were so the two of us headed out in search of good times. Justin, who was coming off his samanela meds, pulled a bit of a “Tokyo Shaun.” Things may have gotten a little out of hand for him. Thankfully he was together enough to not go ahead with the tattoo idea he came up with when we befriended some Mexican tattoo artists in a seedy basement bar. Personally I was fond of the traveling butterfly idea he had…

Within the first few days of being on Walkiki beach we did absolutely nothing. We ate. We slept. We ate some more. Amerric-uh. I don’t think we even ventured beyond a 4 block radius. We ate and slept pool side at our hotel,we slept and ate on the beach. We played in the surf and watched amazing sunsets. It was an incredibly lazy time.

My 30th birthday rolled into this lazy period. Erin got me a great ukele made in Hawaii which provided a soundtrack to our lazy day. Later we managed to find great sushi and plenty of drinks within our 4 blocks. A tequila fueled night followed when we ran into our new amigos at the same dank basement bar. Justin reconsidered his tattoo. 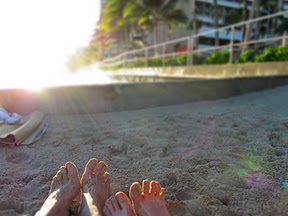 I said goodbye to my 20’s as we drank on a full moon lit beach. It was ok I guess.