Spontaneity and stupidity often go hand in hand. Makes sense. The less time you have to prepare for something, the more likely things will go sour. I would like to blame my latest thoughtless act on spontaneity however my latest thoughtless act was actually very well planned out. You see while working in Winnipeg for a couple weeks Erin came out for a PLANNED trip to Minneapolis. We PLANNED lots of fun things to do in our very short trip. So what makes this stupid then? It’s simple stupid! Driving 8 hours from Winnipeg to Minneapolis…in the middle of December. Winny to Minny. Wow. Never a dull moment.

The drive down really was that bad. Heavy snow and icy roads made for a long, long drive. It didn’t help that every 30 km’s there was a crash of some sorts effecting traffic. Possibly the worst thing about it was that we were driving in the UN-friendliest of unfriendly road conditions…to go to Minnesota. Whaaa??? 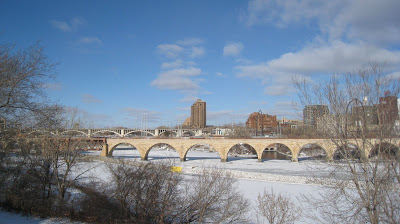 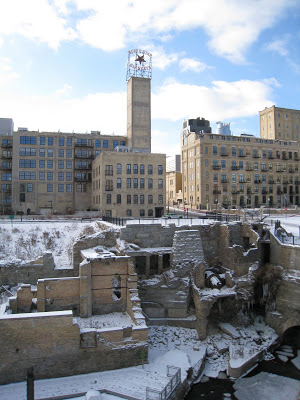 I called my mother to see if she could confirm that we had indeed lost our minds. No dice. She did however confirm that we were not alone. At that same moment not but 2 states south west of us, Al was caught in the midst of his very own thoughtless thought out act. He was driving a Porsche boxter from Denver…wait for it…to Yellowknife. Maybe it’s a male thing?

We arrived in the Twin city later than we had PLANNED and were beat from the journey so it was nice to have a great hotel to crash at. Once again thanks to Priceline we got the downtown Hyatt hotel for $50/night. Thank you Bill.

When Erin and I joked about going from Winny to Minny we started researching things to do there. Surprisingly there was a ton of stuff that interested us. With little time to spend we PLANNED on only a couple sights and attractions, one being the Stone arch bridge. This stone bridge is one of the longest of its kind and the only one crossing the Mississippi river.

More interesting was the old factories and buildings in the area. Some are being converted into condos.

Sadly the weather was about on par for Minny in December so we only made it about half way across the thing. It was quite the sight and was neat to be standing above the mighty Mississippi.

Other interesting note, the bridge that collapsed last year was the next bridge south to the stone bridge.

Next up, just what everyone from Edmonton wants to see…a giant mall. The Mall of America is much like West Edmonton Mall only it has tons of parking, the halls are easy to navigate, stores are easy to find, its well laid out, and the décor is not from the 80’s. Pretty much the same. 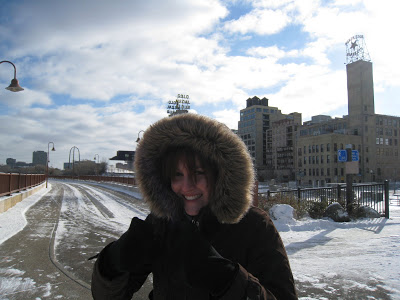 We actually spent more time at the Mall than we had PLANNED simply because there was actually a lot to do. Lego land and roller coaster that I thought were for kids and Erin thought we were going to die on, filled or afternoon.

There was also a great aquarium…in Minnesota? 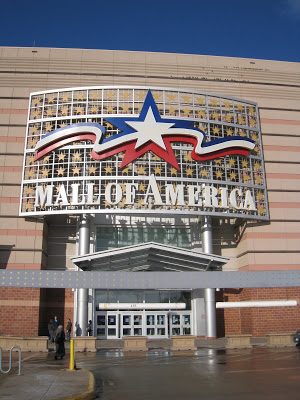 Here is a great shark story from that aquarium, about a year ago this big shark ate a smaller one. The amazing thing? The smaller shark spent days inside this guys mouth…and lived.

It was time for the main event. One of the driving forces to make us commit to such a dreadful drive, to such an unknown city, was an NBA game. Now this wasn’t your normal everyday game. Nay. This was a game of epic proportions. Well…not really. It was a match up of the 2 worst teams in the NBA. The sad storied Minnesota Timber wolves (at the time 4-19) vs. the ever weak L.A. Clippers (4-20) Top up your heart medication Grandma, your in for a ride. A battle for worst in the NBA is what it really came down to and because of that tickets started at…I kid you not…$2.50. Sold. Now being the “Go big or go home” kind of guy that I am, $2.50 tickets would not do. Especially after the nightmare of a drive we had getting there. I figured we deserved an upgrade. I was ready to fork over a ridiculous amount for court-side seats when I thought “Why would I want to get sweated on by Fred Jones or high five Rodney Carney or some other unknown. No thanks. So for a fraction of the court side seats we got club seating which came with a great dinner and (more importantly) an open bar…which by the by are two of my favorite words. Needless to say the game was comical. At one point I wanted to shout, “Can I play?” It was that bad. Thus the free beer made it that much better. We had a blast and were eventually and politely escorted out (after the game and after the small crowd of 1500 or so had all left.) 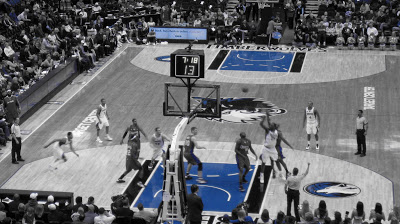 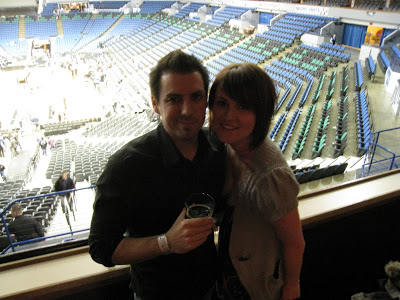 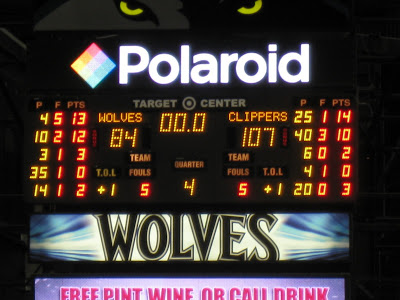 After the game we stumbled our way through the frigid Minnesota night to an artsy bar we had read about. The cool thing about it? It has an ice bar in its courtyard. Pun intended. The place was really cool (again? Really?) but not just because of the ice bar. The place had this sophisticated vibe that I really didn’t think existed in a place like Minneapolis. Who knew? We spent the next couple hours between the frozen bar, the outdoor fire pit, and the art filled inside all the while sipping martinis and sampling shots. Around bar close we made our way to a bar called “Manhattan” It was there the night got away from me. Being one who likes to sample local food and drink (When in Rome…or a place called Rome?) I ordered the drink of the same name. Good God! Has anyone else out there had a Manhattan and lived to tell about it?? Now it was probably a combo of free beer, martinis and shots however after that poisonous concoction things got blurry for Shaun.

Things didn’t clear up until I woke up vomiting on the hotel floor the next morning. Not one of my finer moments. This began a long and shameful day. It started with sulking our way out of the hotel and making it (through a blizzard) as far as the city limits before I had to pull over with fear of throwing up while driving. Awesome. We ended up at a McDonalds where I stared at my value meal for a good 45 minutes before being able to stomach it. At one point I actually said, “ I don’t mean to be a downer but we are in a bad situation right now. A very bad situation.” A little dramatic yes but I felt that bad and the snow was coming down pretty hard. Thankfully an hour or so later I started feeling better and the blizzard started letting up so we continued the long and painful trek back to Winnipeg. I have to say though as horrible as the drive down was and as painful as the trip back was the Winny to Minny trip really was worth it. Minny really surprised us and we had a blast. Minneapolis…who knew?