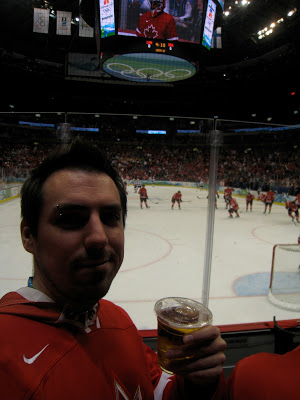 For me, the games came as quick as they went. A blurry 6 months quickly turned into a hazy 6 and a half months. I’m still pinching myself expecting to wake up. Canada’s record setting 14 Gold medals was too perfectly written to believe it as fact. What we got felt like a story book or Disney movie with a Hollywood ending. How amazing was that?
Like the rest of Canada my second week of the games didn’t begin like a fairy tail. Canada’s loss
to the USA in mens hockey capped off a less than magical 1st week of competition. However, unlike the rest of Canada, or at least the 21.5 million of Canadians that watched from home, I was lucky enough to be there. It was an amazing feeling being in that arena…or at least for the first 2 periods. 2nd intermission felt like we were at a funeral. Dead were the Ra-Canada fans. They were replaced by anxious, teeth clenching people who all wished Ryan Miller would just go away. When the final buzzer rang the USA fans could be heard loud and clear…and rightfully so. American fans were reading Canada’s last rites. Some were over the top and tested many Canadians politeness, myself included. One such Canuck was notably fuming as he was taunted by a loud, drunk American. His face was as red as his Brodeur jersey. I watched as he approached the heckler…fists clenched. “Easy Brodeur” I said in an effort to calm him down.
“Will get them in the finals” 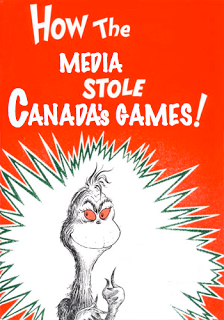 How the Media Stole Canada’s Games

With the over pressured Canadian Athletes failing to take home the hardware they were expected to in the first week, Canada’s loss in hockey was, to the media, icing on the FAIL cake. These “glitched” games were a failure for Canada. Even COC (Canadian Olympic Committee) CEO Chris Rudge threw in the towel. Nice acronym Chris.
Yes, everyone had given up on our athletes. USA Media outlets were taking aim at Canada’s ambitious “Own the Podium“program. Sadly it was our own reports that truly blew things out of proportion. “Jennifer Heil, you just won Silver! Congratulations!…What went wrong?” Yes, it was time to pack it in and head home. Well, funny thing Bob Costa, OUR fans had not given up and OUR athletes were HOME. Much like the Who’s in Whoville, Canadians took to the streets of Vancouver and Whistler in unimaginable numbers and celebrated OUR games. They cheered, they high fived and they sang. Perched on top of the peakieast peak of Grouse Mountain, the world listened in udder disbelief. “They sing with silver? They sing without snow?? They sing with faulty hydraulics, leaky Zamboni’s and very few GOLDS???” 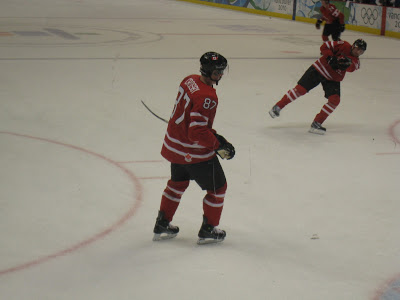 And just like “Dahoo Dorray” Oh Canada rang out loud and clear… With that the naysayers of the world hearts grew 3 times that day.

And maybe…just maybe Canada’s athletes were inspired by the outpouring and pushed to the finish like no other Country has done before…or historically Canada is stronger in the second half of Winter Olympic competition. Personally I prefer my Dr.Seuss storybook rendition. Either way that second week was an amazing time to be Canadian.