We arrived at Universal Studios park and Erin was giddy. It’s not often you get to revisit something you love in such a short timeframe. I played along as she eagerly guided me through Hogwarts. First stop was grabbing some butterbeer, a Harry Potter drink turned sugary reality. Think condensed milk mixed with cream soda. It was, shockingly good. This helped butter me up for what was next – Ollivander’s Wand Shop.

This wand demonstration showcases the powers of Universal Studios most sought after a souvenir, and on this tour, one lucky boy or girl gets one of their very own. To Erin’s disappointment in this instance, it was a heavyset girl in her 20s in full wizard costume. Good for her. As the “wand chose her” she rejoiced as if she had just won the Super Bowl. Hmmm. As we exited the show I had a better understanding of why – these wands retail from ~$50 and up! On the plus side, they do some pretty incredible and interactive things around the Universal Studios park. As one gentleman in his late 50s demonstrated, a simple flick of the wrist set off a seemingly inanimate sculpture.

My Harry Potter scepticism continued to evaporate on the Forbidden Journey – supposedly one of the best rides in the whole park. I’m sure this is the case…if your ride has sound. A technical glitch made my experience a little less magical and a lot more comical. The group seated behind me had done the ride before and gave their best commentary as we road in otherwise silence.

Later in the day, we took the Hogwarts to express across the park to Hogsmeade. This ride, although short, was lined up for days. This left us with only enough time for a couple more rides before stumbling on Universal Studios Springfield.

“Welcome to my Harry Potter world!” I eagerly exclaimed to Erin. She did a far less convincing job of feigning enthusiasm than I, but I didn’t care. I was too busy pointing out all the great Simpson references. And why shouldn’t I be excited? Sure I am a grown man getting giddy over a cartoon theme town but this cartoon town has been there for me since I was 10 years old. First up was the only ride in Universal Studios Springfield – The Simpsons Ride. It was a bit of a let down only judging by the long queue and massive structure it sits in. After lining up for 20 minutes (and that was with the express pass!) in what I thought was a rollercoaster, we found a virtual ride instead.

The slight disappointment wasn’t anything a crusty burger couldn’t cure. 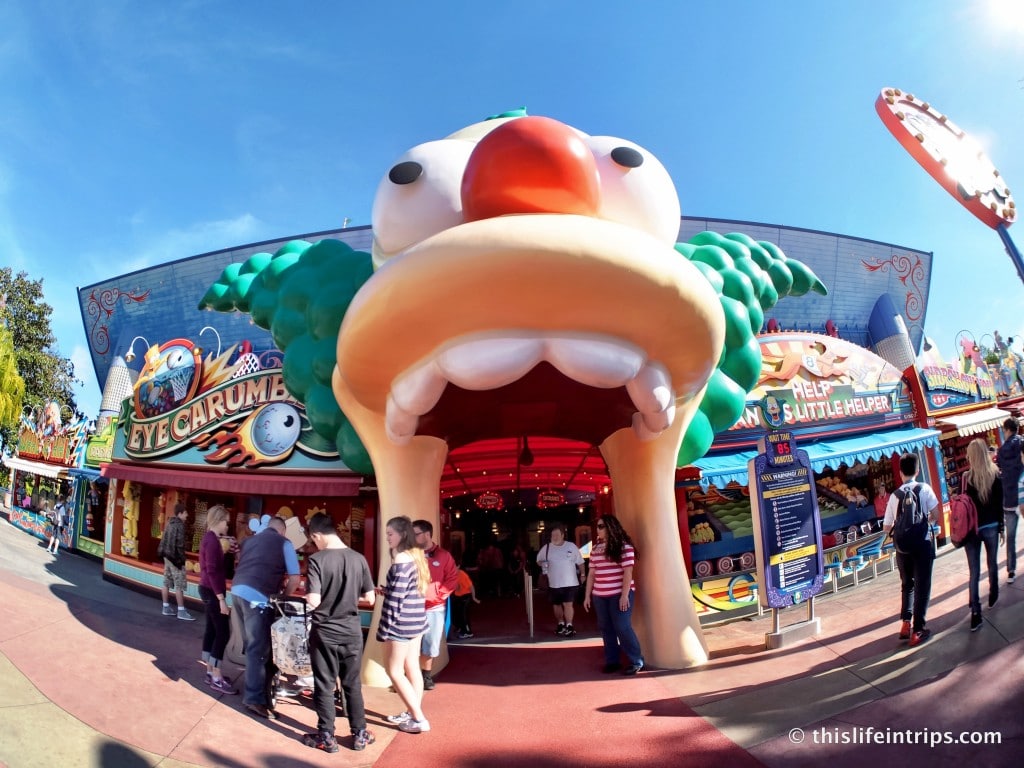 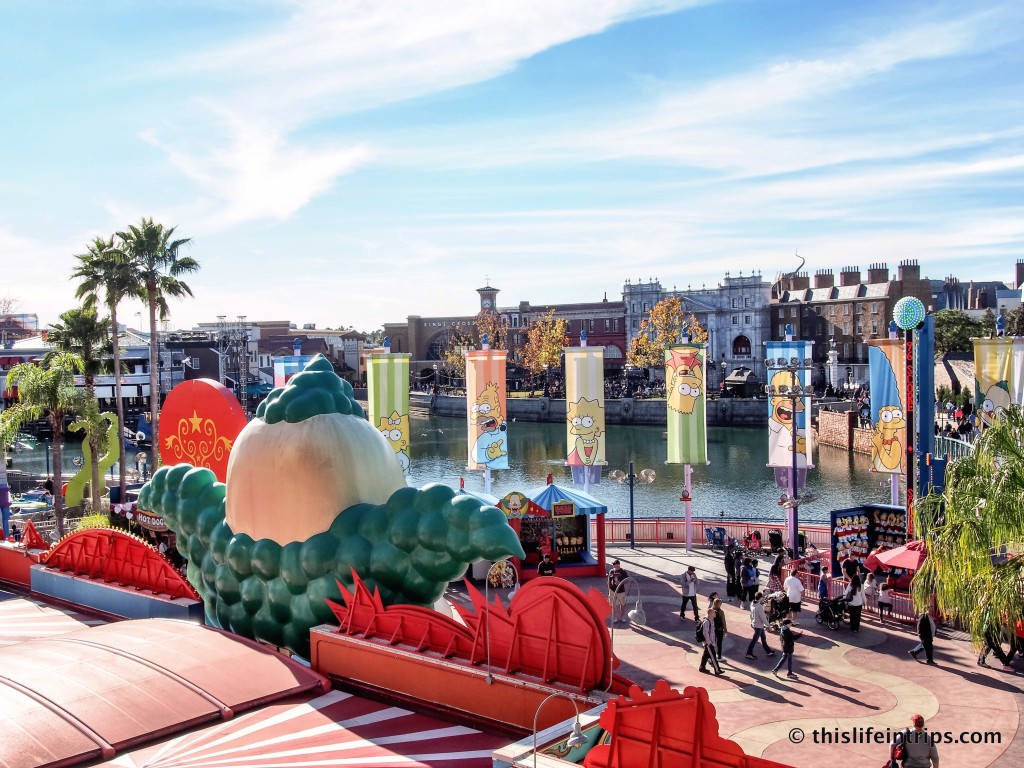 Strolling the streets of Universal Studios Springfield we passed iconic Simpson hang out after iconic Simpson hang out. The Kwik-E-Mart, Moe’s Tavern, the Frying Dutchman, and more. We settled on a pint of Duff beer outside of Moe’s where I took it all in. The beer could’ve been watered down Coors Light for all I cared. It was the simple fact that they called it Duff that had me (and many other men in their 30’s I might add) fangirling. This was my Harry Potter world, and man did I enjoy it!

The only others indulgence I had while visiting Universal Studios Springfield was a stop at Homer’s favourite breakfast shack, Lardo Lad Donuts. Full up on Butter Beer, Erin agreed to split one doughnut. I took this as buy the “big pink,” a sprinkle covered giant the size of my head! 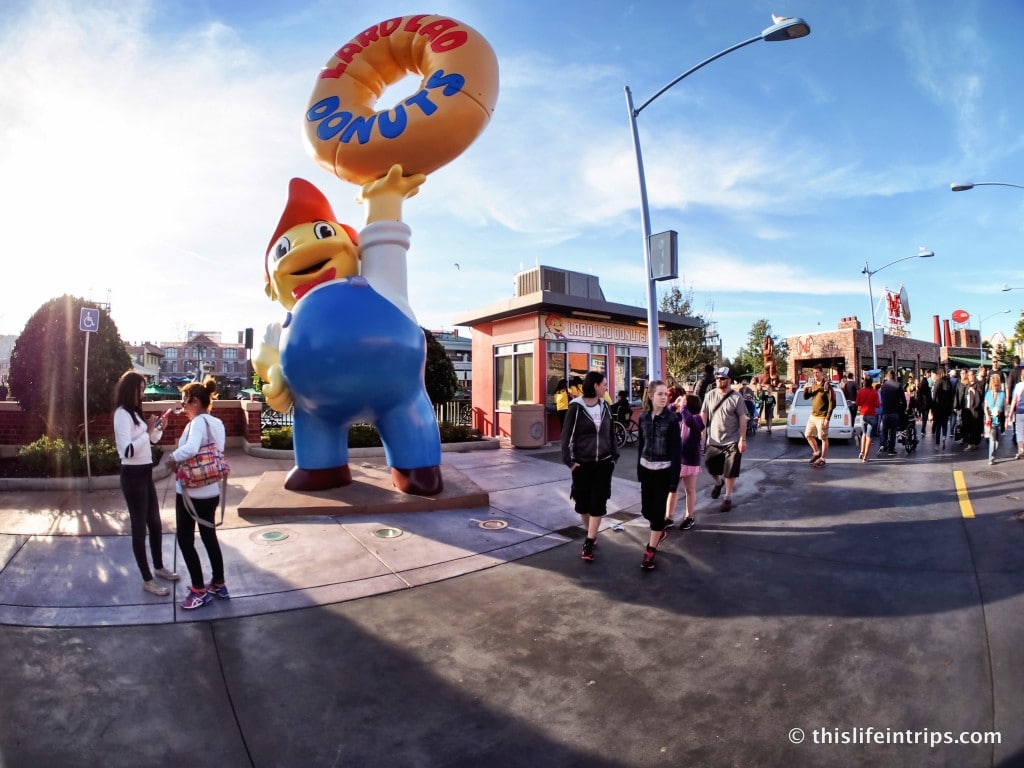 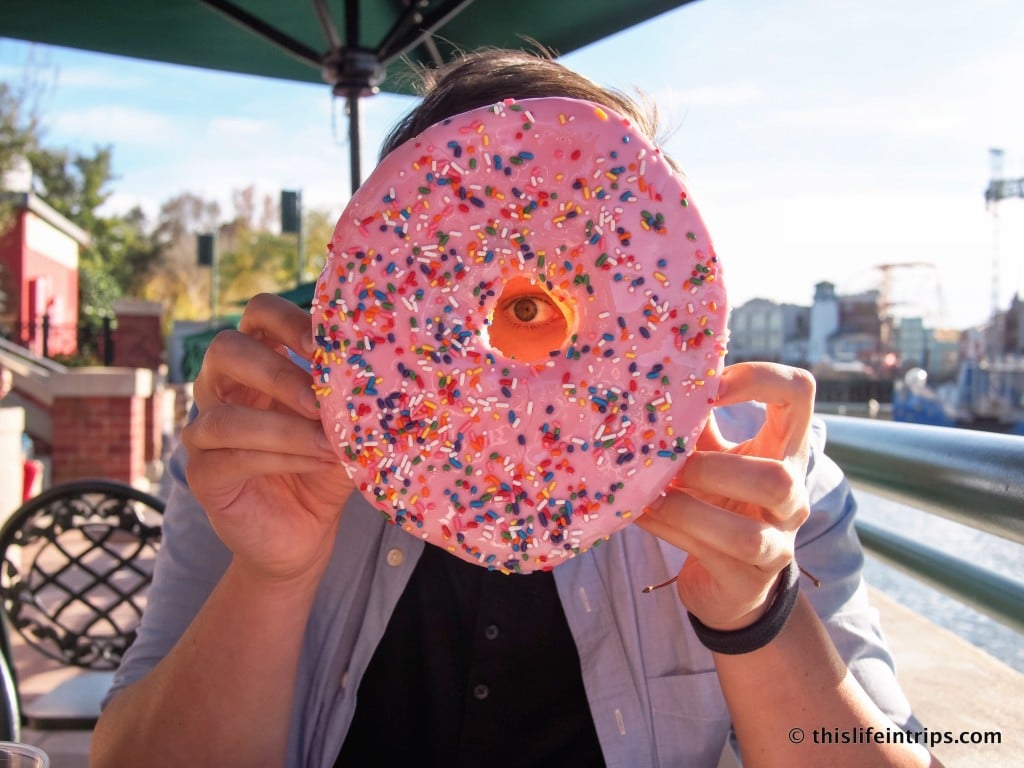 Don’t be so quick to judge

I left Universal Studios Springfield with a smile from ear to ear and a pink brick in my stomach. Although the latter would later make me almost regret the visit, it did not change my mind. Sure, Universal Studios Springfield is cheesy and marketed to make you buy ridiculous stuff, but so is Harry Potter World. Let those nerds have their Nimbus Two Thousand and One Broom Stick and Chocolate Frogs. I will stick with my Flaming Moe and Kwik-E-Mart gear.

This made me appreciate and understand Erin’s enthusiasm for a bunch of tween wizards. In the end, both Harry Potter World and Universal Studios Springfield are about connecting to something bigger, whether it is in the memories of what brought you happiness as a youth or as an adult enjoying a book series meant for teenagers.

For that, I say thank you Universal Studios! 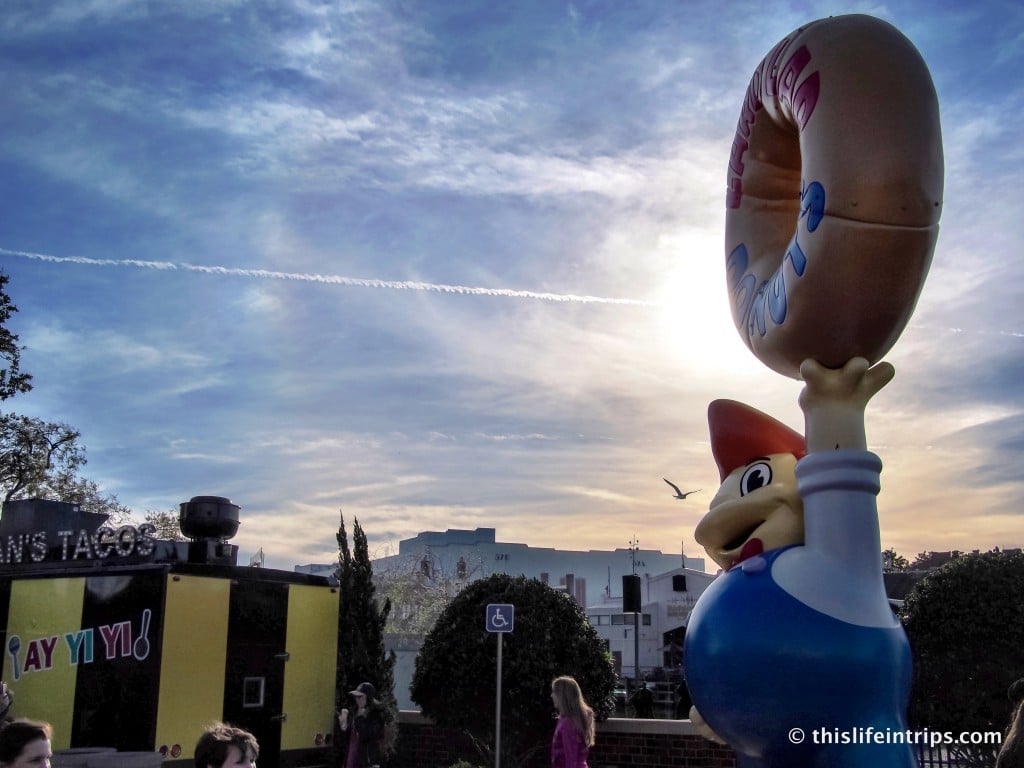 What say you?
Thoughts on my time visiting Universal Studios Springfield?
Let’s hear it! 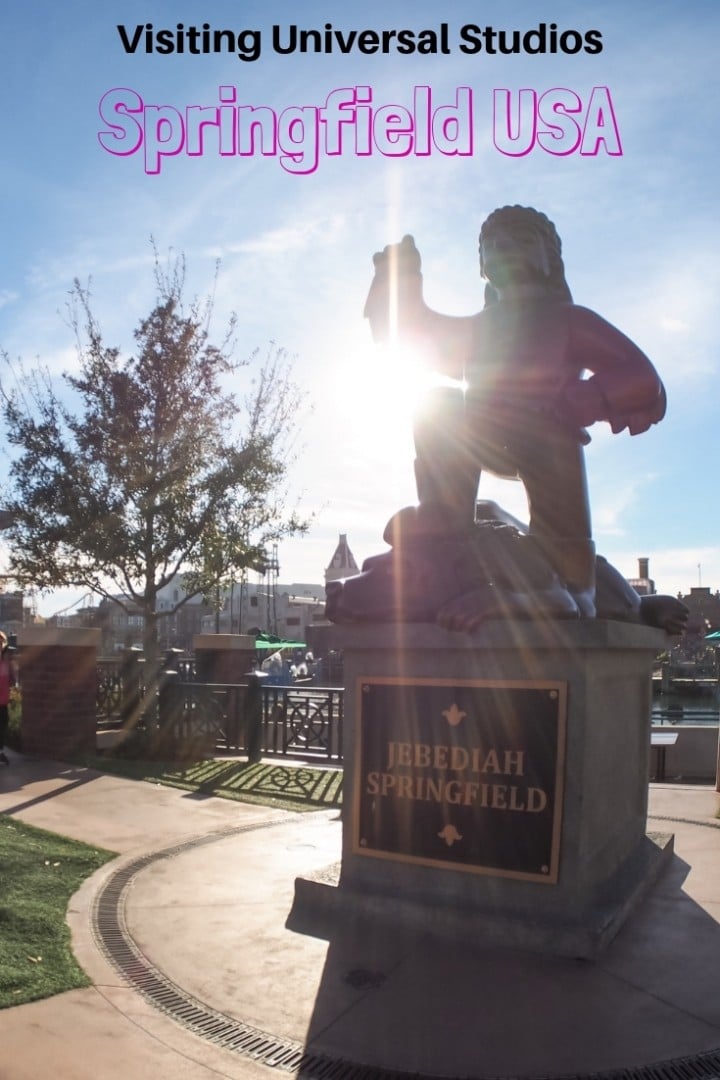 Although I was provided a complimentary day visiting universal Studios Orlando,
the experience, opinions, and fangirling are my own.