Shaun lives out a boyhood dream – Court side Celtics 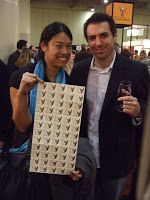 Leaving a stressful couple weeks at work behind, I now had all day Thursday to relax and plan the busy weekend ahead. Sitting court side Celtics game would make it all worth while. It all started Thursday night at the Toronto Wine and Fine food expo. Nervous about the 8 hour plus drive the next day, we packed our bags with the hopes of shaving a few hours off the trip after the expo. Let me tell you it was incredibly difficult to limit myself to a couple glasses of wine, especially when one of Erin’s rep’s was feeding us free tickets. I have to hand it to Erin, she definitely picked up the slack and put a huge dent into our pile of tickets. After a martini with fine cheese stuffed olives I used my tickets for food. Procuitio and Chilean empanadas were the meal of choice . Erin, her co-worker Cassandra and rep, Karen Wang (side note, her father’s name is Harry. I’m just saying.) went through there tickets with glasses of wine and shots of fine “sipping” tequila. That’s probably when the illusion of a classy night lifted as we loudly discussed everything from arm pit hair to labia reduction surgery. So funny and so much fun. 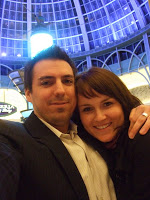 With the show ending at 10:00 I gathered Erin and we headed out. As we said our goodbyes Karen suggested we stop at the Niagara falls casino to try and win back some of the money spent t on the trip. Not being one to say no we accepted the challenge and made a pit stop. It was 12:30 by the time we got there. We gave ourselves 1 hour or double our $300, which ever came first. We high fived and entered the casino. 15 minutes later we were down $200. I decided to play out the last $100 at another table. That’s when I got on a role. I ended up playing $100 to $200 hands and was nearing our double our money limit. With 2 minutes to spare I lost $200 on a split and double down. In the end we were up $50 which paid for our shady hotel just outside Rochester New York. 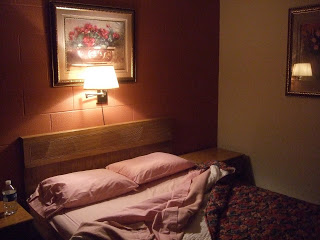 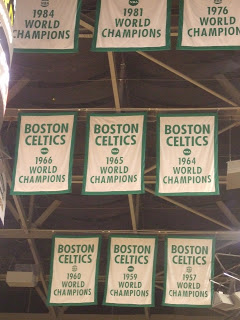 We checked in around 4:00 am and were out the door and on the road again by 9:30. At that point I was running off of adrenaline and excitement. In less than 10 hours we would be court side at the Celtics game. For those of you that don’t know, the Celtics are one of the most winningest teams in pro sports history. I followed them and their success growing up but by the 90’s they lost their winning ways and have not been a contender until this year. Over the summer they acquired sharp shooter Ray Allen and then Kevin Garnett in an unheard of 7 player swing. Now they are the best team in the NBA and at the time of this Boston road trip, a perfect 8-0. Yes, things are good for Boston in the sporting world. The Red Sox’s just won their 2ND title in 4 years, The Patriots are undefeated and now the same for the Celtics. Bean town may very well take Edmonton’s “City of Champions” motto and rightfully so. 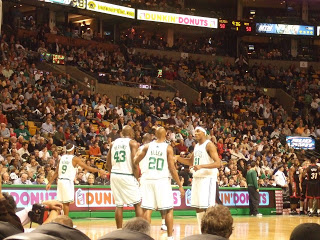 The drive started out crappy. We went through a few near white out stretches but by noon it was clear skies. We made excellent time and got into Boston around 3:15 and were checked into our hotel by 4:00. Sadly, the tickets were not there yet. To my surprise I wasn’t panicking. Checking the FedEx tracking number I found that there was no activity on the package since 3:00 pm the previous day. I spent the next hour and a bit talking to FedEx to try and locate the tickets. Apparently it was stuck in limbo at their sorting facility in Memphis. With 2 hours to tip off I phoned the seller. To my surprise I got a hold of him. He apologized for FedEx and said he could cancel the tickets and open email tickets. Great. He called back 2 minutes later and said there was a 2 hour cut off to issue e-tickets. We were 3 minutes late. The sell had one last suggestion, he would drive to our hotel (he lived 45 min away) and give us 2ND level tickets with the idea of getting into the building with those and sneaking down to our seats. Out of options I accepted and waited for him to show up. While waiting I met a couple decked out in Celtics gear. I asked if they wanted to split a cab to the game. 40 min latter the seller pulled up, in a shiny new Cadillac I might add. New tickets in hand, the 4 of us rushed off to the arena. We were skeptical about getting to our original seats so we stopped off at customer service to try and explain the situation. As expected, without tickets in hand there was nothing they could do. Dejected, tired and hungry we made our way to our new seats just in time for the start of the game. Now the seats were OK and I was at the Celtics game but I could not shake the thought of our other seats, epically when I could see them from were we sat. It really sucked. Close to losing it, Erin went and got us pizza and beer which gave us energy for our second attack. At half time we made our way to our original seats. It almost added to the excitement as security guards and ushers passed by us. As the second half started I was instantly better. The seats were ridiculous. So much fun. I was feet away from players I idolized growing up. We high fived the mascot and dancers as they passed. I was in my happy place. The game was close to which made it that much better. With less than 15 seconds left Boston took the lead and held on to win by one. It was great. After the game we were able to walk up to the Celtics bench and I even stepped on to the court. I’m not going to lie, there may have been some man tears after that. 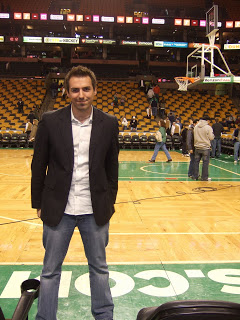 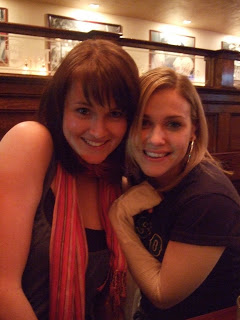 We met up with our new friends at a pub across from the arena. Dude was from Virginia and was a total college frat boy, fun but a tool. He did have an iPhone to which i played with for a good 10 minutes. His girlfriend was nice and listened intently about how cold Canada is. Erin and I had some amazing clam chowder then split a cab back to the hotel for some much, much needed rest. It had been a long, exhausting couple days and the next would be just as great. Not as great as sitting court side Celtics game, but pretty great.