Will the Real Texas Please Stand Up?

Our Dallas experience left us feeling like we didn’t get to see the “real” Texas. We drank craft beer and chatted with hipsters that didn’t give a fuck about football. This seemed a little sacrilegious to me. If American TV has taught me anything its that Texas loves football almost as much as they love JC. Don’t get me wrong we had a great time, its just that we where expecting something else. Where’s the cowboys? The country music? The pickup trucks? The BBQ? The Steak? The beef? In short:

Where is the stereotypes?

To search these out we headed to Fort Worth and made our way down to the Stockyards. This historical area was once home to Americas largest one-stop shop for livestock. Millions of hogs, sheep, and cattle were bought, sold, slaughtered, and shipped from “where the west begins.” Once dubbed “The Wall Street of the West” the Stockyards was a booming  livestock hub and at its peak pushed over 5 million heads of cattle in one year alone. That’s a lot of beef. With all those cows came railways, industry, cash, and cowboys. From that came hotels, brothels, and saloons.

Today the historic grounds are a fun collection of bars, shops, hotels, restaurants, steak houses, and live music venues – many of which are housed in original buildings from the Stockyards hay days.  You can get your fill of Texas on the weekends with cattle drives and rodeos or you can visit the various museums scattered around the grounds to get a feel for what the area was like at its peak. Of course there are shops to get you decked out in Cowboy gear from head to toe. Don’t forget the big ass belt buckle.

Of course all of the history and Cowboyness is great but the real reason I was so excited to visit the Stockyards was to eat a giant steak.  You hear a lot about Texas beef so I was curious to see what all the fuss is about. Living in Alberta I have had more than my fair share of steak. I remember the mad cow scare a few years back when farmers were unloading their beef at ridiculously reduced rates. I ate like a King that summer. A damn ass beef barbecuing king. I also ate my weight in steak in Argentina so yah, I know a thing or two about meat.

Anyone and everyone we had the pleasure of chatting with had recommendations about eating meat at the Stockyards – seriously hipsters in Dallas, Friends that have been there before, friends that have lived there, peeps on the interweb, and cab drivers all had a say. This made us think we really couldn’t go wrong. We wandered the streets looking for the best steakhouse. In the end the we decided on H3 Ranch, not because it had a giant Buffalo butt above the bar, nor because it was attached to the rad and historical Stockyards Hotel (seriously, check out the pictures on their website), and not because it smelled like BBQ heaven. No. The deciding factors was how many cowboy hats were in the place – and with just a glance through the window the answer was a lot more than the other steakhouses we peaked in on. 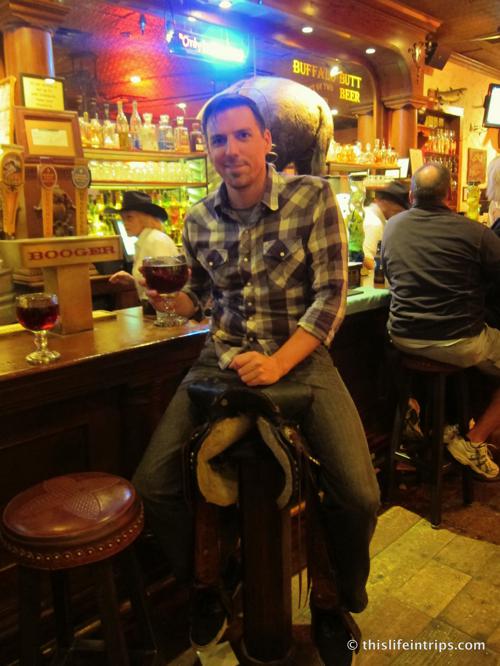 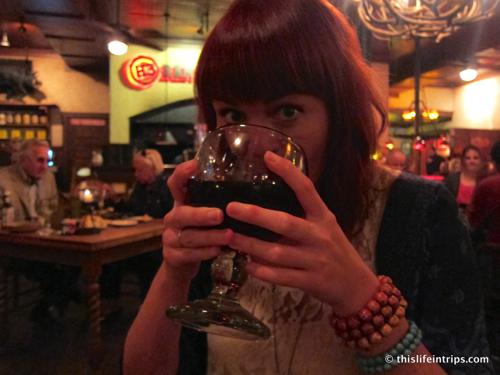 After a couple large beer and a small wait in the bar we were seated. I had visions of picking out your own cow like you would with lobsters but sadly this was not the case. Although there were several tasty options on the menu I decided on quality over quality as the massive porterhouse caught my eye. When in Texas? 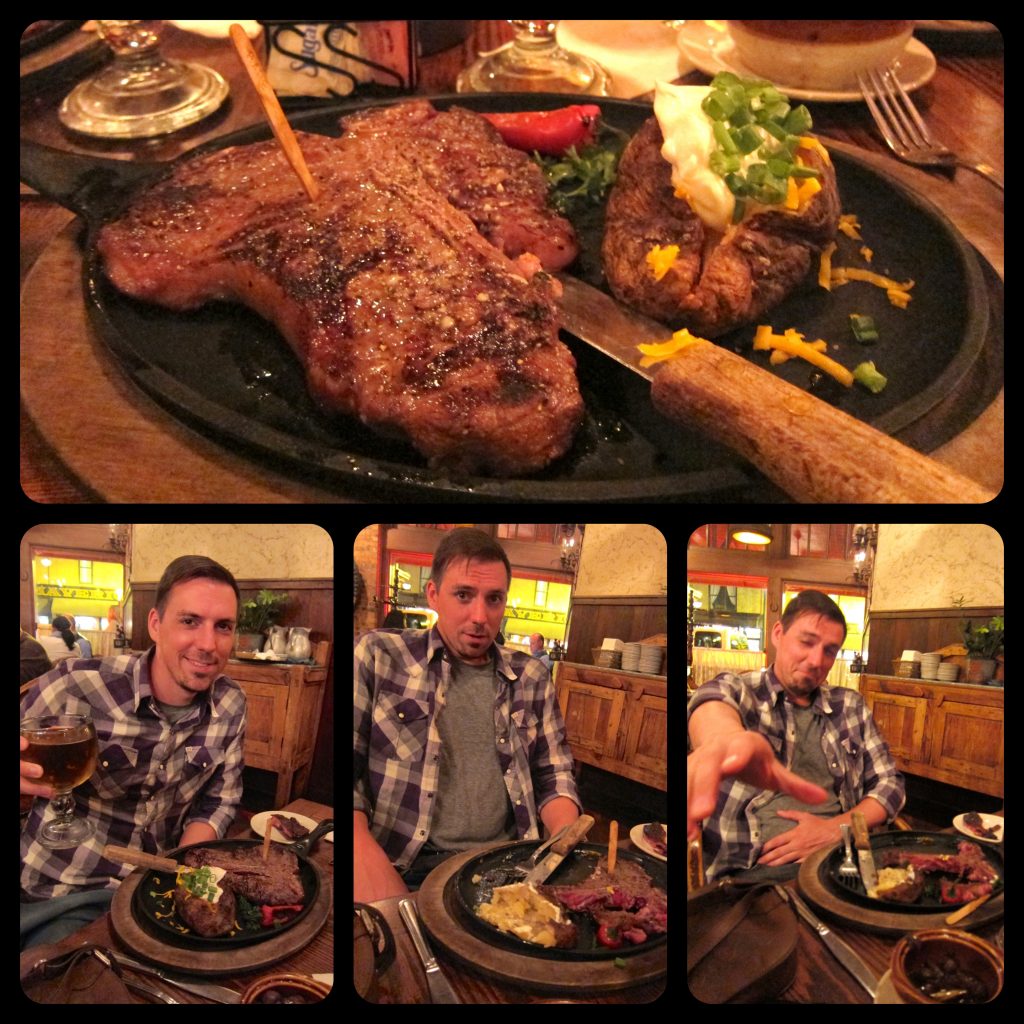 Disclaimer: I couldn’t do it. Travis finished it off. Tip of the Cowboy hat to you sir.

Our food arrived and my steak was indeed, ginormous. All in all the meal was great but I am not convinced it was any better then the beef in Alberta or Argentina. I honesty enjoyed the baked potatoes and mushrooms more. Maybe living in Vancouver has made me soft?

Shirt unbuttoned and belt loosened we rolled our way out and on to the main drag in search of relief. The surprisingly cool Texas night provided welcomed relief to my meat sweats. After enjoying cheap beer and some live music at an outdoor pub we made our way to the White Elephant Saloon and settled in for an evening of amazing music, 2-stepping, and shuffle board. This historic venue was once a popular gambling house that had seen its share of gunfights. It has also served the likes of Wyatt Earp and  Bat Masterson. This 120+ year old establishment has a ton of character including dusty cowboy hats nailed to the walls and ceilings. This was indeed the Texas I was hoping to find. We had arrived. 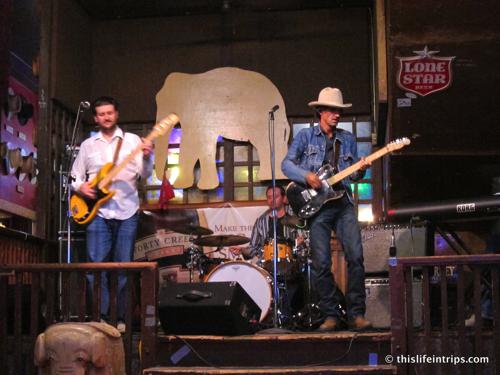 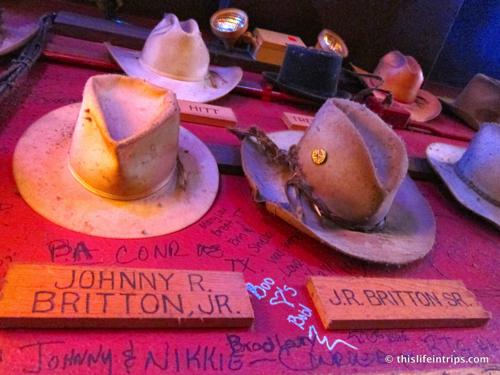 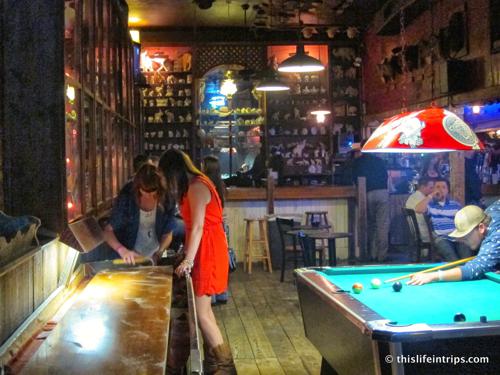 Post bar we also stumbled on these gems making us like our Texas experience that much more:

The Stockyards proved to be our favorite stop in Texas and would say it is a must-do if in the Dallas/Fort Worth area. I would also recommend buffet pants and a large appetite.