After two years of working almost every single day in the land of healthcare, I was overdue for a break.  I ventured on a 3-week trip to Europe including meeting up with my brother in Georgia. Searching for one-way options home, my timing lined up with Westjet’s seasonal non-stop from Paris to Calgary. I was able to book a flight on their premium business class cabin for just under $1,500 so decided to give myself that treat.

Westjet was one of the only carriers offering one-way fares at half-roundtrip prices between Europe and North America in business class. The booking process was straightforward – searching Skyscanner for best prices then directed to the Westjet website. The only quirk was I wasn’t able to select my seat on the Calgary-Edmonton segment. I called Westjet and was told that seat selection in premium economy on the Q400 was only available at the time of check-in since the first two rows are designated as exit rows.  Understandable, but for someone who is particular about their seat I have to admit it gave me the anxiety to think I might be stuck in a bulkhead aisle. I had a fiasco with Vueling airlines in 2013 and it still irks me all these years later. Shame on you Vueling.

24 hours prior to departure an email advised me that check-in was now available. I attempted to do so via the app but I kept getting the message “Sorry, your check-in cannot be completed at this time.” Each time I reattempted it would allow me to advance an additional step. On the fourth attempt, I was successful and received my boarding passes for my two flights. After all of that, the app instructed me to use the kiosk or the check-in counter at the airport.

I left for the airport more than 5 hours before my flight due to interruptions with the train service in Paris. This is my fifth visit to Paris since 1993 and *every* single visit there has been a train issue of some design. Maintenance, strike, dead cow on the tracks (not kidding), have all caused delays. This journey to the airport entailed one metro, 1 failed attempt at a bike ride, 1 surface bus, 30 minutes of walking between bus stops to get to the temporary airport bus location, and finally the temporary bus to the airport. Two and a half hours later I was at Charles de Gaulle.

Proceeding to the Westjet check-in area I attempted to use the kiosks to verify my documents as instructed by the app. The kiosk would not recognize my boarding pass. Eventually using my passport I was able to get to the next screen. It was a short-lived victory as Calgary was not a valid destination for check-in. No problem, I’ll proceed to the check-in counter.

The check-in area for Westjet was chaotic. There were, according to the screens above the counter, 3 lines to check in: economy, premium, and supervisor. There was no distinction between the lines and no signage at the entrances. People just picked any line they wanted and crammed towards a check-in position. I walked around for a couple of minutes trying to sort out the lines or to find someone to ask but to no avail. It was a sea of people and luggage carts that didn’t seem to be going anywhere. I decided to take my chances with document verification at the gate and headed to the customs and security line.

While in line for customs I received an alert via the Westjet app that the gate had been changed from L26 to K59. This turned out to be significant because they are different areas for security. So I quickly changed security lines and got through to the K gates to find there is no such gate as K59. After 15 minutes of standing in another line with Air France for assistance I get another alert stating my gate has been changed back to L26. Back out of security, back on a train, change terminals, and go through security again.

After the 90 minute ordeal of attempted check-in, customs, flip-flopping terminals, and going through security twice, I had just 20 minutes to check out the Air France lounge before boarding. Access is included for the passenger only as part of the business class fare. The lounge was spacious and comfortable with various seating options, cafe tables, and a designated quiet zone. Food selection consisted of selections of cheese, salads, bread, a small number of hot items, and packaged snacks. There is also self-serve soft drinks and wine.

I arrived at the gate shortly after boarding began. A priority lane was available and I joined that and was quickly on board. It turned out that Westjet CEO Alexis von Hoensbroech was also on the flight and made some welcoming remarks over the intercom, followed by some rather disparaging comments on mask mandates which I found unbecoming of a CEO. He also stated he would be making his way around the cabin during the flight to speak with passengers and I was looking forward to discussing my experience with the Paris airport check-in process. Turns out he didn’t actually do this, as confirmed by one of the flight attendants at the end of the flight. A link to this review and my disappointment at this fact will have to do.

Hot towel service is on hold “due to Covid” according to the flight attendant. Unfortunately, many businesses blame Covid for anything they have removed – either as an excuse or because they don’t actually understand what are real infection control risks. I do hope this returns in the near future.

The business class section consists of 16 individual lie-flat pods in a 1-2-1 herringbone configuration. A medium-sized pillow, fleece blanket, and large bottle of water are waiting for you. A small amenity kit was provided with the usual components such as an eye mask, lip balm, hand cream, and socks, but no toothbrush or toothpaste. The moveable armrest storage compartment is large enough to hold a small laptop or tablet if you want to keep that with you at all times.

The staff on board were friendly and welcoming. The flight attendant introduced himself, oriented me to the pod, and the menu, and swiftly brought me a mimosa, in a real glass, followed by a refill. My first choice of the short rib was not available (I had an outstanding short rib on Air Canada on my flight to Munich a few weeks prior so wanted to compare), so I settled on the gnocchi. In the mark of being a truly Canadian airline, the Caesar was one of the signature drinks. I ordered one for after take-off and asked for spice level 5 and it delivered.

Like most modern pods, Westjet offers a large touchscreen entertainment system. There was no lag after selecting items on the screen and also had a controller tucked into one of the side compartments. There was a wide selection of movies, TV series, music, games and an interactive moving map. Noise-cancelling headphones are provided which is always welcome. The inflight system went offline for about 15 minutes near the beginning of the flight and had to be reset. There were no other issues with it on the trip.

There is inflight WiFi service on WestJet Dreamliner business class flights. Unlike other carriers, it is not included with business class tickets. I had no need to communicate with anyone outside of the inflight crew during my flight. As such, I did not test this out.

The food selection was ample, good quality, but not outstanding. I chose the salmon tart as the appetizer, gnocchi for my main course, and a cheese plate for dessert. Small rolls of bread were came in sealed plastic bags and were very dry. It felt very weird leaving Paris and little attention paid to the bread. A Covid excuse was given for the lack of separate bread service, but in reality, it probably isn’t actually an infection control risk.

The cheese plate was also a bit disappointing – the 3 hearty selections of cheese with 3 single grapes and 2 small crackers. I did ask for more crackers, but overall the balance of cheese, fruit, and crackers really needs a rethink. About an hour before to landing, staff serves a full-size tray of fruit, cheese, and crackers.

The drink menu was very good. It includes a selection of three red and three white wines, sparkling wine, port, and cocktails. There’s also an extensive hot drink menu including espresso beverages and hot chocolate. Westjet gets extra points for their hot beverage service. My macchiato was served in a china tumbler on a long plate complete with a cookie. Very nice presentation, something I have not experienced on an airline previously.

The service overall was very good – friendly, genuine, not overly formal, and very much had the Westjet feel to it. The cabin crew were attentive and responded immediately to call bells. WestJet uses cloth napkins and tablecloths which to me is a mark of elegance. (Despite my two letters to JetBlue about using paper napkins in their Mint cabin they have yet to heed my recommendation).

Westjet offers a solid business class product on par with most other major carriers. On top of that, at the time I booked, it was at a very competitive price point. The cabin has comfortable lie-flat seats, a robust entertainment system, and welcoming and attentive service. The food and beverage service is decent but the food quality and composition could use a few tweaks. I also hope Westjet reinstates its hot towel and separate bread service. I flew with several other carriers on this trip where these were not an issue in business class.

Westjet is also one of the only airlines offering one-way fares equivalent to half-roundtrip cost on a business class product between Europe and North America. This is particularly attractive if your plans do not align with a round-trip or open-jaw fare. My only hesitation with an unreserved recommendation of the product was the check-in experience with the app and at the Paris airport itself. The app and kiosk failures, the chaos of the check-in area, and being sent to the wrong gate requiring changing terminals and clearing security twice was frustrating and took up a significant amount of my time. Unfortunately, it left a negative first impression that demonstrates a lack of attention to a very important part of the travel experience. Aside from that, the Westjet Dreamliner business class product should receive your consideration.

READ MORE: Is Air Canada Premium Economy Worth It?

What say you?
Is Westjet 787 Business Class Worth it to you?
Let’s hear it! 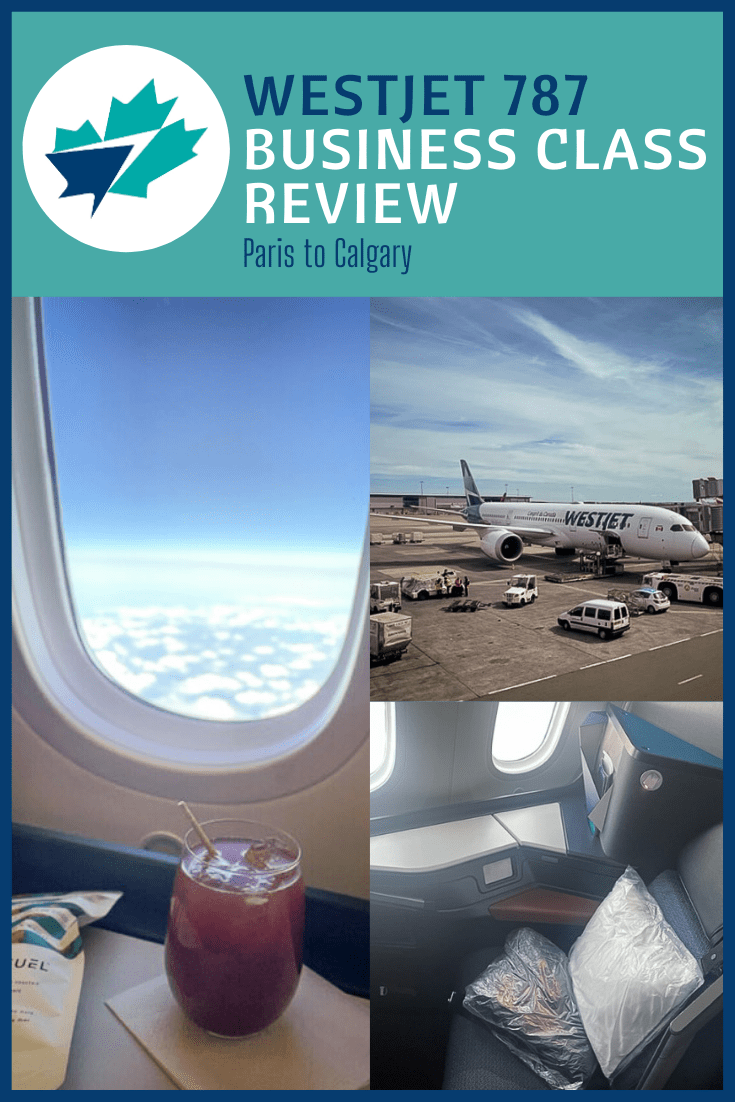 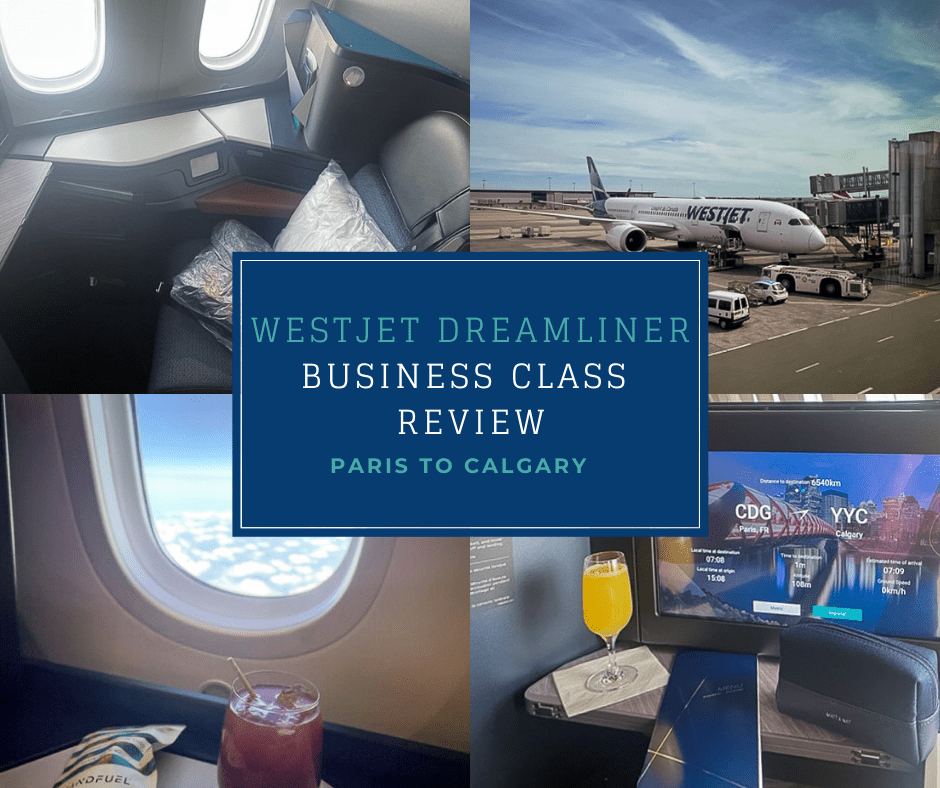