Visiting Lake Placid – Sochi 2014…We got this 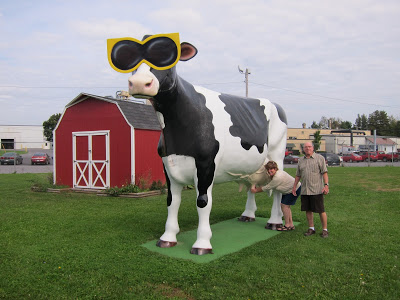 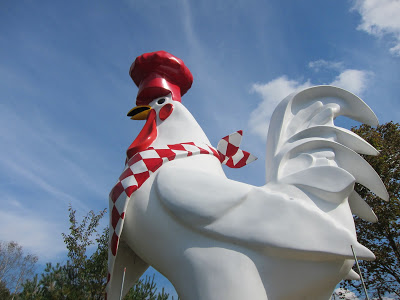 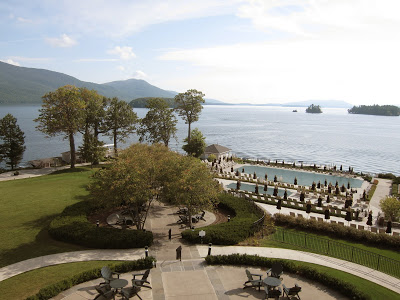 When my mother said to bring my passport I wasn’t sure what to expect. When I was 8 years old she tried to surprise me with a trip to Mexico only to be scrambling at the airport to prove that she was not smuggling me out of the country without my fathers consent. Oh the scars. I was in Ontario to visit with her before heading to a friends wedding and we decided to take my grandfather for a road trip. My mothers intention was to take us hot air ballooning in upper New York however the weather did not cooperate. To be fair the weather was more than fine for fall but if the hot air balloon pilot(?) says its not good who am I to argue? Non the less we spent a couple days touring the Visiting Lake Placid and the Anarodac mountain area which are, especially with the fall colors.

On the way south we noticed a few land marks that made us wonder if New York state boasted the worlds “mediumist” road side attractions. We stopped at this cow which is big but Im sure there is a bigger one out there. You know like the Mundar sassuage or the cowboy boot in Edmonton. You see those and you are convinced there is nothing bigger of its kind…and why would there be. This Chicken is kinda big…I guess.

We were treated like the Kennedy’s as we spent our first night at the Sagamore resort on Lake George. This amazing hotel is unlike any I have every stayed at. Very oldy worldy, and classy. Two things I am not. We kept calling my grandfather “Senator” in an effort to fit in. I’m not sure anyone got that… including him. The place really is something else. The view of the lake and surrounding mountains from one of the many decks or docks is amazing.

Being as far east as I have been in years we dined on lobster sandwiches for lunch and lobster Benedict for breakfast.  Being the off season we had this amazing place virtually to ourselves. Grandpa clearly took advantage of this situation by sunbathing topless. 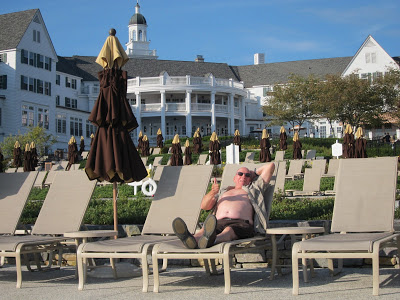 Visiting Lake Placid, the host city of the 1932  and 1980 Winter Olympics was a treat. It is pretty amazing to see that a town of this size could host such an event…twice. Granted things have changed security wise since 1980 but still impressive when you see the size of the town.  This visit added to the host cities that I have been to which has now become somewhat of a hobby. Lake Placid is #20. We toured the very original (1977) and very dated ski jump facility and got amazing views from the top. The rickety and rusted chair lift was  good indication of the age of the tower however it is still used as a training facility today.

We lucked out as team USA was practicing aerials into a pool next to the ski jump area. We sat and watched as future Olympians launched themselves into the air, twisted, flipped, and turned before splashing down. Very cool. We were also treated to one jumper who missed the launch and flew off the side with a comical yelp. With that I say to Team Canada,  Sochi 2014…we got this.

Visiting Lake Placid is not complete without a tour of the Olympic Museum. For the most part a recap of the Miracle on Ice American mens hockey team of the 1980 games. There were some great articles from past games including ice skates from the 20’s, Olympic torches from all the past games and ticket stubs. Being able to see and hold the 2010 games torch made it neat to see how it has evolved over the years. Paying high prices for the 2010 and 2006 games tickets made it interesting to see the inflation over the years… 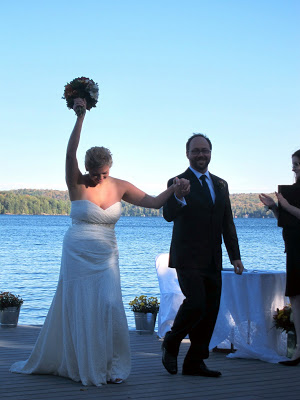 We retired to our hotel for a rest after a busy day of visiting Lake Placid…and by rest I mean the early bird dinner and in bed by 7:00 pm. Retired life is grand. Well rested and fed we made our way north of the boarder in time for Ma’s homemade soup. No visit would be complete without it.

I said my goodbyes to visiting Lake Placid and my ma then took a relaxing train ride and not so relaxing car drive to the Muskoka area to meet up with Erin for yet another fall wedding. Erin was one of the brides maids so that may have played a part in the kickass cabin we stayed in. The location was great and the weather cooperated for a beautiful dockside ceremony. Big congrats to Jason and Mandy Robert. Thanks for letting us be apart of a great weekend.

Written By
Shaun Robertson
More from Shaun Robertson
In this ever-growing world of streamlining and cost-cutting tactics, the evolution of...
Read More