Apart from a fishing trip to Yellowknife and a weekend layover/hangover in Edmonton, summer 2011 was kept relatively local. It started with what will now be an annual summer trip to Whistler with a stay at our favorite hotel (Nita Lake Lodge), and dinner at our favorite restaurant (Rim Rock Cafe). Both amazing. Another annual trip will be to the Inn at Laurel point in Victoria.  On top of it having great harbor view rooms it is also a client of Erin’s so we were well taken care of during out stay. Both spots are obvious staycation locations for those living in Vancouver. 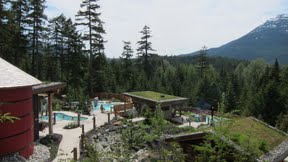 It was a slow start to summer weather wise in Vancouver but we seemed to luck out on our weekend trips and staycation outings. We took advantage of the sunshine and brought our bikes to Whistler and Victoria and had a great time dodging bears and tourists. After passing tons of bear shit and eventually a couple bears Erin spent the rest of the day with music playing and bike horn honking.

Another repeat will have to be the the Scandinavian spa in Whistler.  It was a relaxing way to spend a morning…not that we biked enough to earn a day at the spa.

Victoria was relaxing in a way only a little capital city can be…quiet and uncrowded. This was especially surprising as it was Canada day weekend.  We were treated to fireworks without the crowd as we could see them from our patio which was great.

The roughest weekend of the summer was a trip to Live at Squamish. This 2 day music festival started off with turkey baster Red bull/vodka shots and beer pong. It ended with me throwing up out of my jeep during Monday morning rush hour. No, I wasn’t driving. I KO’d early the first night as I lost everyone we were with during Girl Talks closing set. In my mind I figured everyone else was heading back to the hotel as who really wants to watch a DJ mix other peoples songs at a rock concert? Apparently everyone but me.

To be fair my day started at 4:00 AM as I decided to try fly fishing for the first time. I was hooked…figuratively and literally. Learning to fly fish is one thing. Learning in the wind is another. Once I got the hang of it I really enjoyed it. It was hard not to as we were surrounded by mountains, seals were feeding 10 feet away and whales were spouting in the distance.

The second day at the festival was really why I was there (apart from Robyn’s birthday) as Weezer was closing out the show. Despite being a fan since the Blue album I had never seen them live. I was giddy to say the least. Perhaps I was to giddy to notice the alcohol I was consuming. I had preemptively taken the following day off work so that was probably playing on my mind as well. Details became spotty after getting kicked out of the beer gardens. Glen, a Kiwi friend, and I headed stage right. After that I remember parts of Undone, Say it ain’t so, a cover of Pumped up kicks, and rubbing Rivers Cuomo’s shoulders as he made his way through the crowd. Apparently there was a girl on my shoulders for a good part of the set. I’m not sure how she got there. I speculate that during one of the several times I was bent over looking for my now twisted glassed I was mounted. Perhaps she thought I was presenting?

More booze filled fun this summer included the now annual Bike Patio Tour. What is BPT? A slightly stoopid bike tour of friends patios around the city…with booze. Good times ensue. This year was a little more tame than last time as last year someone innocently fell off her bike (while parked) and ended up with stitches and months of physio therapy for her thumb. Still rum punches, chilli infused vodka caesars, mojitos, and birthday cake shots were had. No casualties to report. A wiener dog that thought she could fly leaped from a bike basket but was fine. That happened.