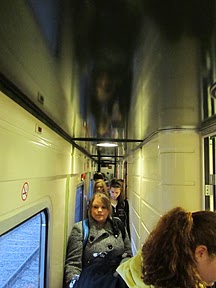 I don”t remember trains in Europe being able to ride like a stunt car on 2 wheels. The night train I took from Paris to San Sebastian Spain 5 years ago was modern, sleek, and about as roomy as a sleeper car can get. This time around we shook and rattled our way south in a train that probably transported troops during the second world war. I awoke several times during the night as the train sped up and slowed down taking corners and straightaways like a rally car racer. The ultra narrow corridor made loading the 50 of us interesting. Our hyper tour guide didn’t help things as she talked in circles during the numerous pep talks about boarding the train. I’m sure she had some of the students convinced that they would have to throw their luggage on the train while frantically running after it. Naturally the one fat kid with glasses and asthma would be left out of breath, red faced and fading in the distance. Our last image of him would be his sad chubby face inhaling from his puffer. I joke of course. There was no fat faced child…we left him at the Brussels airport as we raced for our connection to Paris. 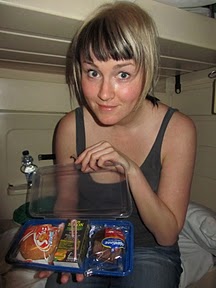 We already had some interesting experiences with Sonya and boarding trains in Paris. As we were running to catch a subway car one of Erin’s girls, who failed to tell anyone she was lactose intolerant and just ate her weight in cheese pizza, became ill. 48 people were running down the platform to get on the car and Erin and this poor pale faced girl are running in the opposite direction. I yelled for my group and others to hold up and they did. Sonya shouts, “No No! Go Go!” and they did. Mass confusion followed and almost resulted in me losing my group to the Gypsies of the Paris subway system. Thankfully Amanda overpowered Sonya and was able to stop everyone before the train left. The day before we lost one of the Texan’s to the subway. One of the slow moving chaperons. Naturally tensions were a bit high when Sonya explained the boarding procedure. The hyper paranoia didn’t help some of the chapornes as it understandably rubbed off on them. In reality we had a good 25 minutes to board the train but of course that didn’t stop us from acting like we only had 2.5 minutes. 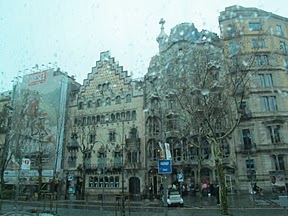 We were woken up with breakfast in bed an hour outside of a very soggy Barcelona. The meal consisted of a doughnut and a chocolate muffin. Nutrition is important children. I ate my breakfast cake and side cake while watching the Spanish country side whisk by. The always sunny Mediterranean coast was being pounded by unusual amounts of rain. This did not play well for us as we went straight from the train to Gaudi Park for a walking tour. This meant 45 minutes of sloshing around in washed out dirt pathways. Soggy and soaked we then boarded a bus for a tour of the city. Most kids slept through this. Understandably as little sleep was had strapped to their bunks on the train. 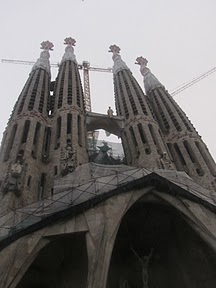 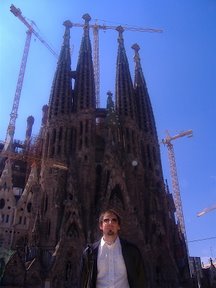 We drove by venues of the 92 summer Olympics which I enjoyed seeing. Memories of the USA dream team and the cauldron being lit by a flaming arrow played in my head. These games were very successful for Barcelona and completely transformed the city It was also was special for me as it sparked my interest in basketball, the Olympics, and sports in general. In a way those games transformed me from a chubby video game playing 12 year old to a very active 13 year old. This happy memory faded as I overheard one of the kids say she was born in 93. These games and sights meant nothing to these kids.

Our wet tour of soggy Barcelona concluded at the famous and always under construction Sagrada Familia. This 100 year + construction was Gaudi’s last project before getting splattered by a tram. We were ushered off the bus and told it would return in 45 minutes. Awesome. The weather was horrible which was a shame as we all did a brisk walk around the perimeter then took shelter in a gift shop for 40 minutes. By the time I got to Barcelona 5 years ago I had seen enough churches to last a time. This church however blew my mind. A real shame the kids couldn’t see more of it. 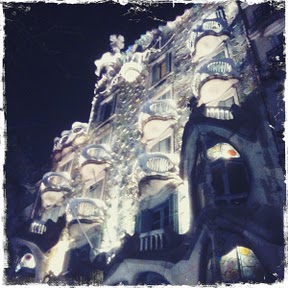 After sometime to dry off at our super modern hotel in the outskirts of the city we headed back into town for a night tour of a couple of Gaudi’s buildings. They are impressive enough by daylight and extremely eerie by night. 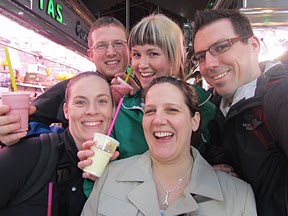 The next day the rain let up so we were able to enjoy roaming through the Gothic quarter and La Rambla street. Soggy Barcelona no more! La Rambla was not really as busy as I remembered, most likely from the weather and time of year. I felt like a jerk as I told the kids to hold off buying souvenirs as La Rambla would be lined with street vendors selling one of a kind crafts. Even the street mimes were more or less missing. Still the kids seemed to enjoy it. Strolling through the market brought back memories of Jon and I buying fresh meats and cheese which we ate in a nearby square. Most of the kids didn’t last long in the market. The sight of pigs heads and the smell of fish sent them back to the shops of La Rambla. 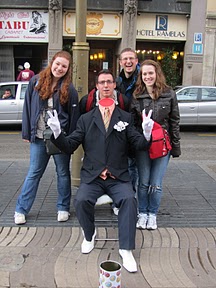 After a lunch of “Authentic” payaya in the harbor we were on our own for 5 hours. 5 whole hours! Naturally the kids (and Erin) shopped. I found a cozy side street bar, had a coffee and relaxed.When finished I still had plenty of time to kill so I had a pint…and then another to wash down the off-the-bone prosciutto and tapas I had. Amazing.When that was done we strolled the Gothic quarter some more before finding a cafe in a square. I had another amazing coffee while Erin had a cigarette. It was tres European. 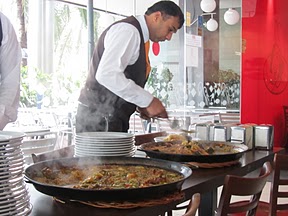 We rejoined the rest of the group feeling like students and not chaperons. Our Texan counterparts were amazed that we let our kids roam free all afternoon. They stuck with their kids the whole time which surprised us as they didn’t seem all that strict or caring of their group. We would later find out that it was more a trust issue as they actually taped their students hotel room doors shut at night! Erin and I were thankful that Amanda didn’t tape our doors shut.