So, turns out Koreans like to drink. A lot. So much so that it has become part of their workday. Hoesik, which innocently means dinner with colleagues, always involves plenty of libations. Sound like my kind of work environment! To get a better understanding of Korean drinking culture I enlisted the help of O’ngo Food Tours and headed out for a night filled with soju, kimchi, and good times.

After meeting up at O’ngo Food Tours HQ we were off. Robert, our Korean drinking culture guide filled us in with great tidbits and facts of the old neighbourhood we were in and what to expect at our first stop – Korean BBQ. Already this O’ngo Food Tour was worthwhile as I never would have found this interesting area on my own.

While the meat grilled Robert explained that eating is a big part of Korean drinking culture. After work, it is common (very) for co-workers to head out for a night of barhopping and eating, with their boss picking up the tab. This is said to build on teamwork and work relationships. Sounds great but it does come at a cost– no social or family life beyond work. It has become so bad (or good depending on what side of the fence you sit on) that some companies are limiting the “mandatory”Hoesik work outings as an incentive to draw in new recruits. Crazy right? 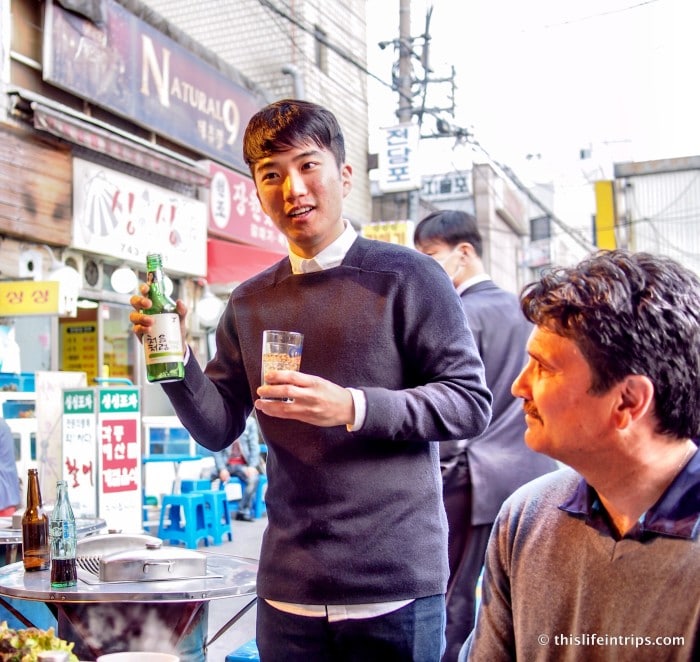 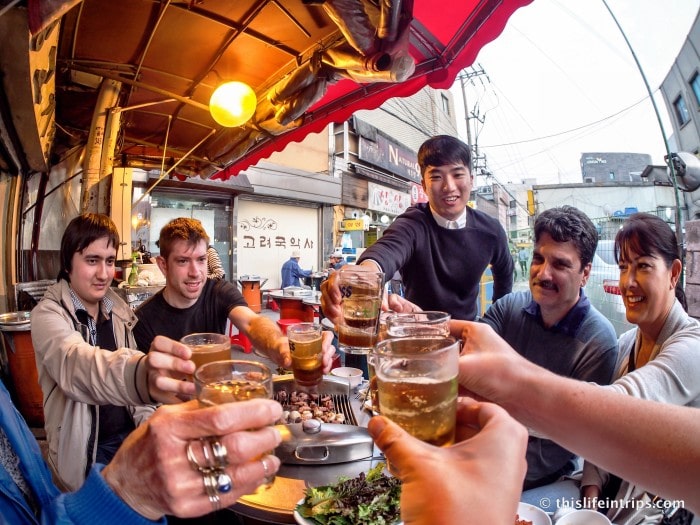 After pouring a round of somaekcol shots, (an interesting combo of soju, beer, and Coca-Cola) Robert explained how to tackle Korean BBQ. Delicious Korean BBQ.

Next up on our Korean drinking culture tour was rice wine and topokki. This spicy rice noodle dish had an odd but familiar texture and taste. Think SpaghettiOs but with fat noodles! 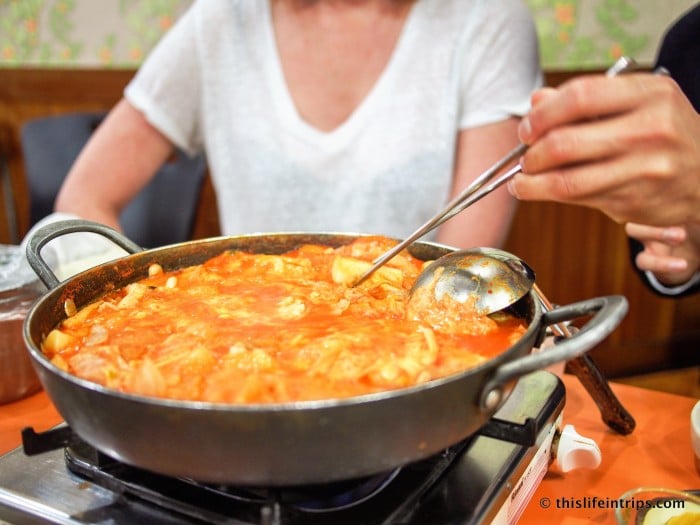 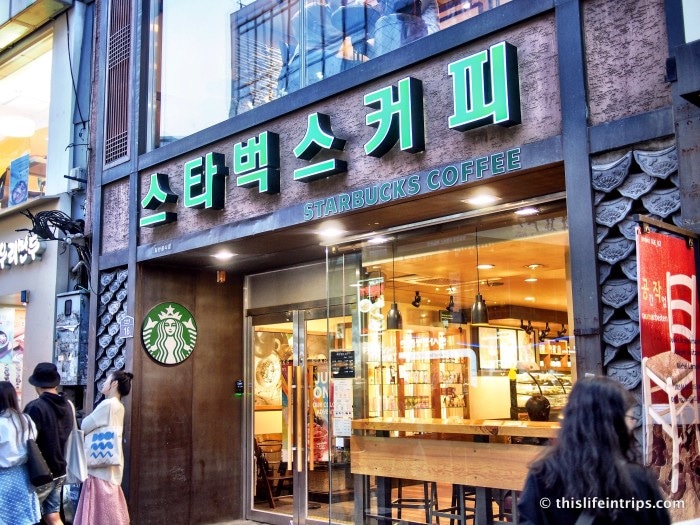 From there our Korean drinking culture tour continued passed the only non-English Starbucks sign in the world (not sure why this is fascinating to me) and down one of the oldest streets in Seoul. So old that peasants used to dodge royalty through it in an effort to avoid bowing till the processions passed. We were not escaping a royal family in this alley but sampling Korean omelettes and took Korean drinking culture up a notch with the addition of drinking games. Another common Korean drinking culture activity. 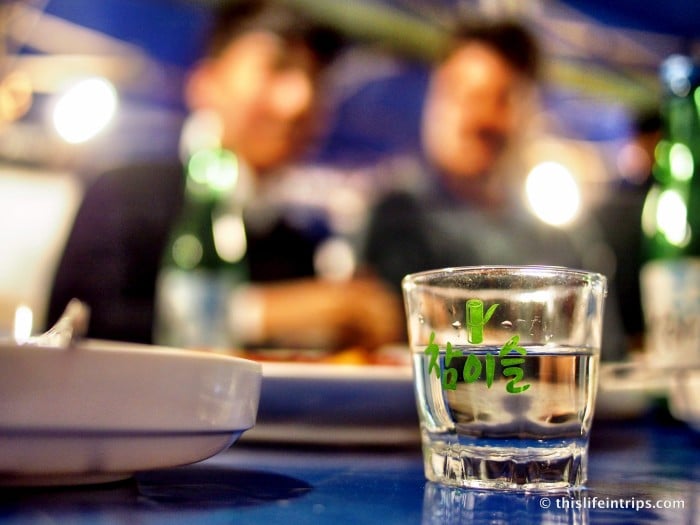 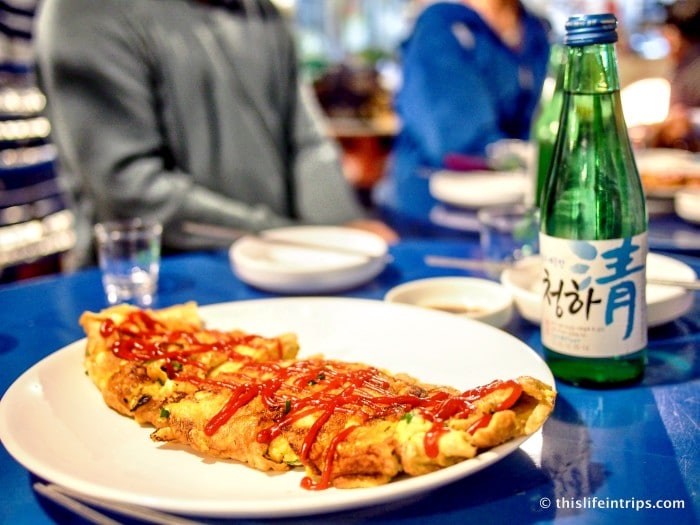 Our next up on our O’ngo Food Korea and Korean drinking culture tour was a stop at Kwangjang market – Known for their famous mung bean pancakes, a North Korean dish. These crispy pancakes are the oddest thing I’ve seen come out of North Korea since Dennis Rodman. It paired nicely with Makgeolli, A murky rice wine served in a small bowl. 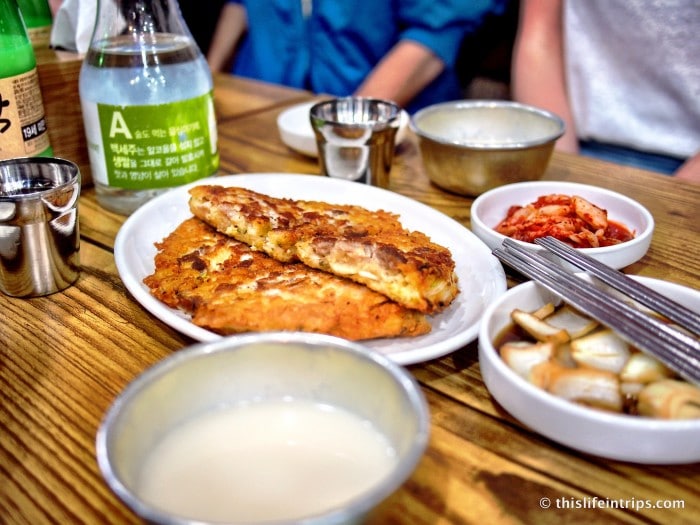 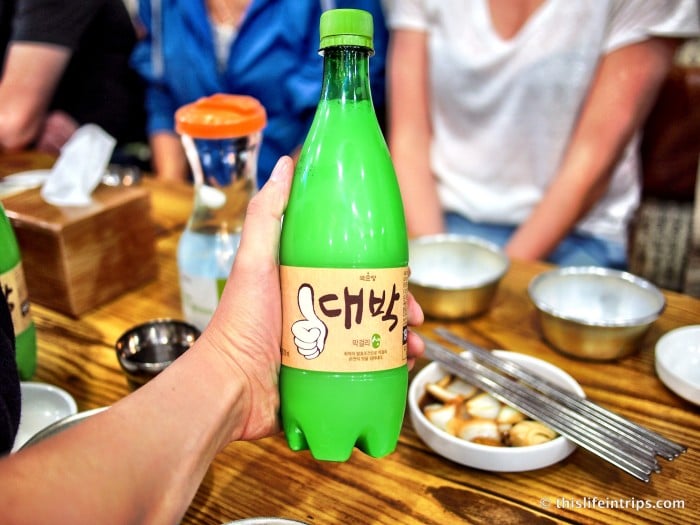 With the final visit through the Kwangjang market our O’ngo Food tour and night of Korean drinking culture concluded. This was a great peek into the interesting social and work life in Seoul and recommend this tour to foodie and drink lovers abroad. Robert’s insight and likeable personality made for a fun night– one that ended hours before other Koreans still on the clock.

What say you?
Thoughts on the Korean drinking culture in Seoul?
Let’s hear it!

Although I was provided a complimentary O’ngo Food Tour,
the Korean drinking culture experience, opinions, and shots of soju are my own.

How does this foodie tour rank?