The brand new and shockingly large six-story Courtyard by Marriott Prince George has a prime location in downtown Prince George, or so you would think. Normally downtown locations are coveted by hotels and are usually reflected in the cost. In Prince George’s ghost town like feel, I’m not sure this adds much value. Strolling the street anytime after 6 PM you will see little traffic beyond seemingly homeless people roaming about. One highlight is that there are two craft breweries within walking distance, Crossroads and Trench Brewing.

The ghost town feel of downtown Prince George made its way into the hotel itself. On my three separate stays, I saw one-two other cars in the underground parking garage and maybe two other guests in the hotel. I understand that it is a brand new hotel and it literally opened the week I stayed there but still, seems shocking that there would not be more of a draw. 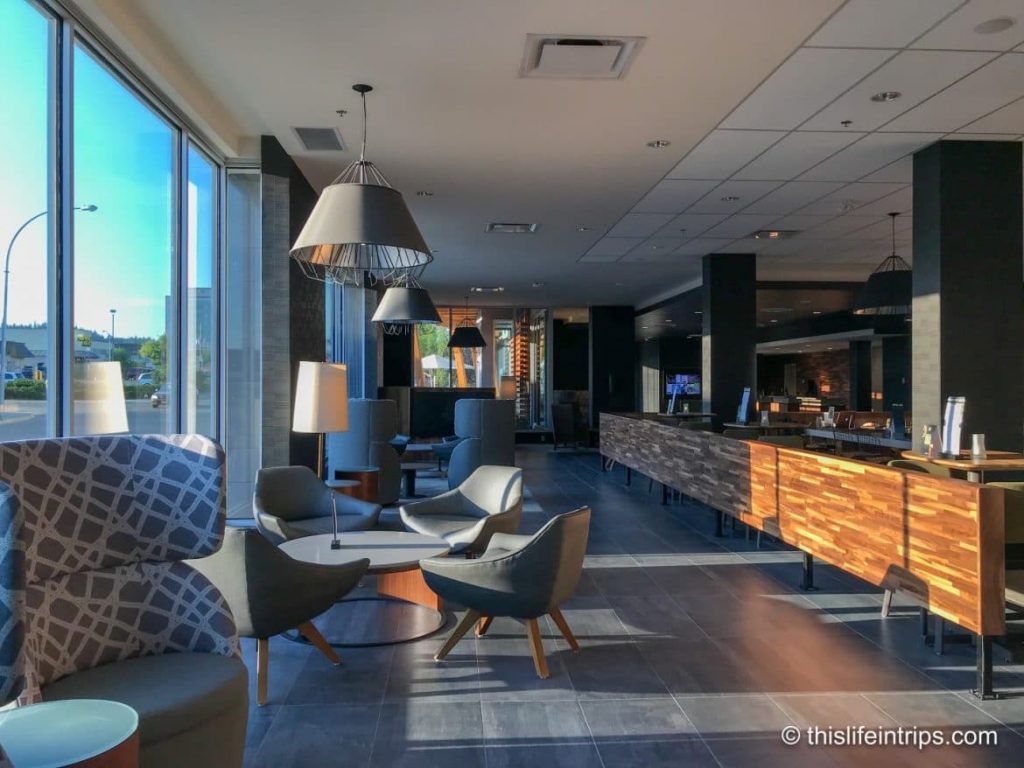 It was early and I guess before tourist season although I’m not sure how much tourist traffic Prince George actually seems. I couldn’t help but think about a VICE Guide to Travel episode I saw where they took a trip to North Korea. It was full of grand hotels with massive dining halls that are just a façade put up for those visiting guests from beyond the locked-down borders. Then again this comparison could have popped up because I was staying there during Trump’s TV dominating summit between Korea North Korea and the United States.

But I digress…and retreat to my room. 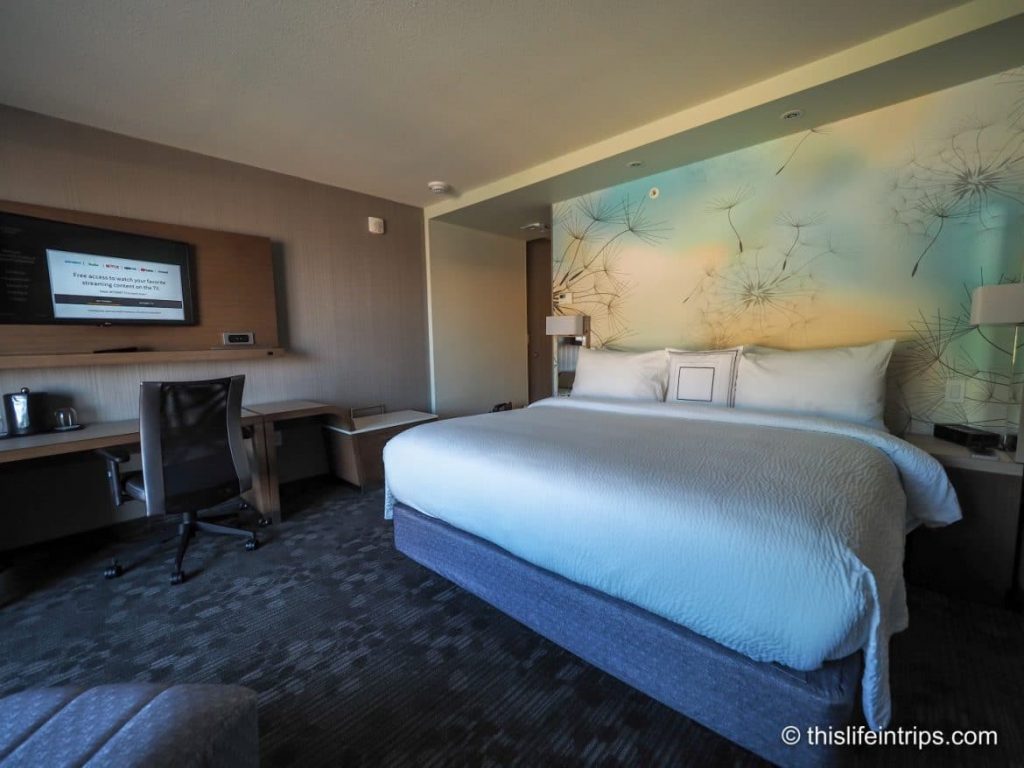 Everything in the Courtyard by Marriott Prince George is modern, clean, and well thought out. Again, it is something that just feels so out of place in such a rough and working-class town. I don’t mean this in any sort of bad way but I just don’t see the reason for it but am more than happy to have it for this Courtyard by Marriott Prince George review. I suppose that is a reason in itself. 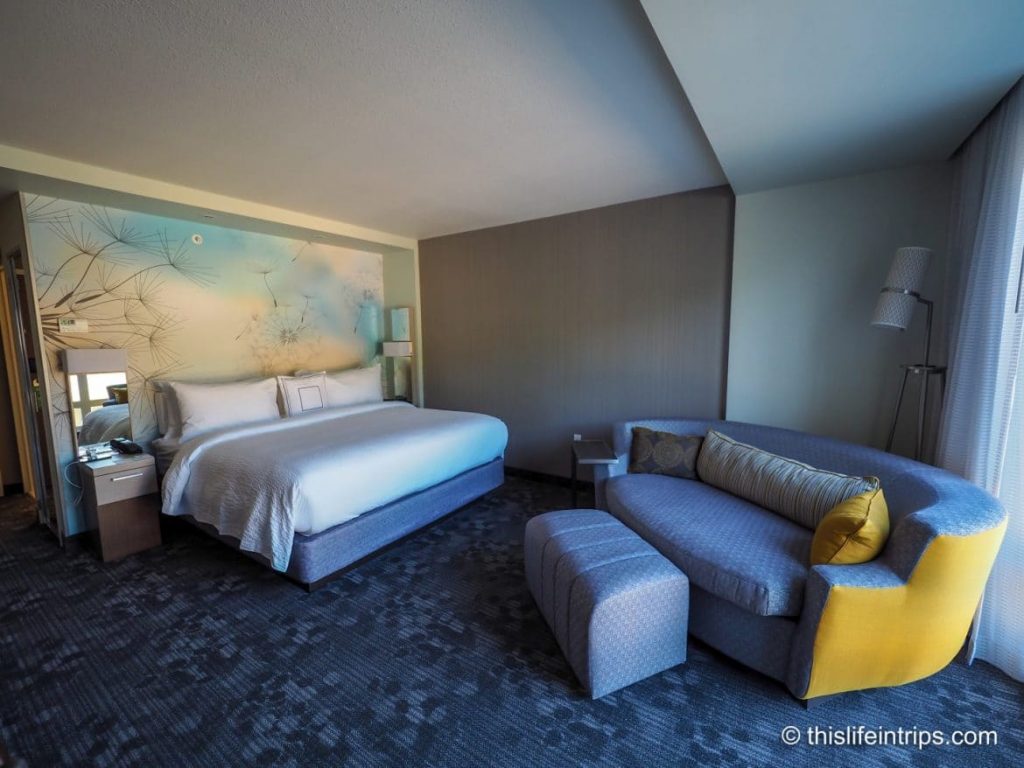 During my stays, I had a room with a king size bed and a pull-out couch. Although the rooms aren’t overly large, they are well laid out. An example is the entertainment system is above a well thought out workbench that also includes a storage space for your luggage. Next to the TV, you will find a power supply stand designed for tablets and smartphones. Another nice touch is their TV’s allow you to log in with your own Netflix account, giving you access to your favourite streaming programs.

The coffee machine, again something I don’t typically use when staying at a hotel as they are rarely cleaned, ran clear water through it so was obviously brand new. The cabinet next to the coffee machine hides a small fridge and microwave.

The modern, clean, and well thought out plan of the Prince George Courtyard Marriott can be found throughout the property. The gym, for example, has brand new excellent equipment as well as plenty of free weights and machines. Next to that is a swimming pool and hot tub, something I normally don’t use when staying at a business hotel. Being one of the first guests I decided to take advantage. 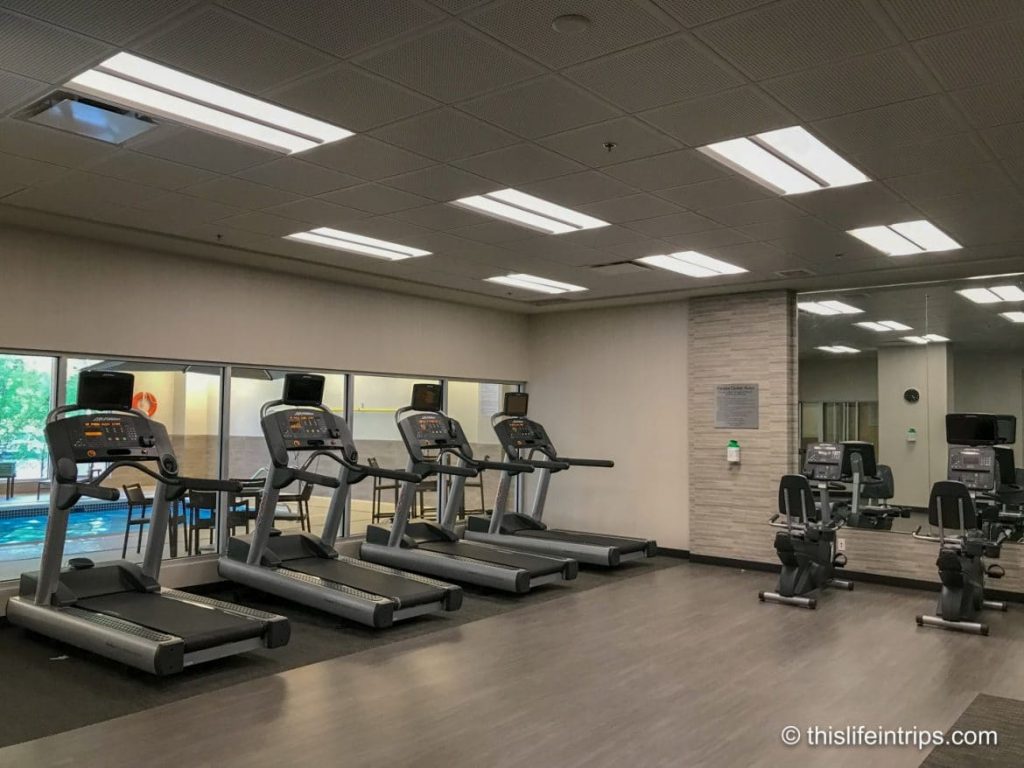 Lonely in the Lounge 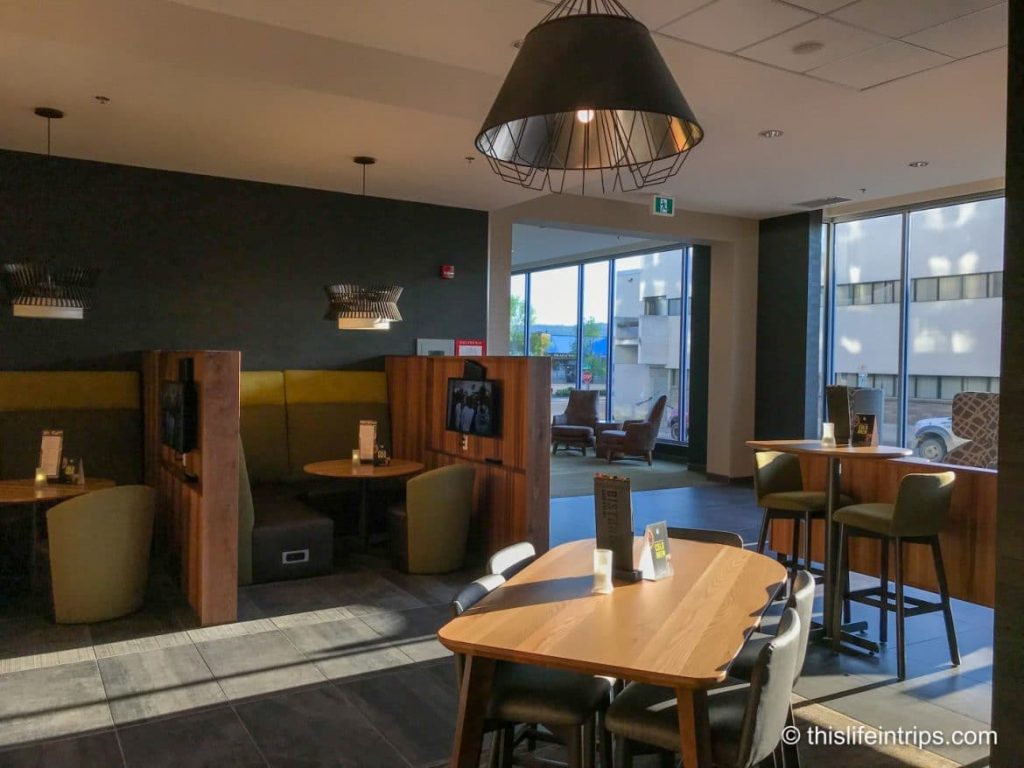 Each time I checked in, I glanced across to the lonely attendant working the massive bar and restaurant area. We caught eyes and broke awkward stares. She was probably delighted at the chance to actually do something. Feeling sorry because of this thought led me to the lounge on the 3rd and final stay of this Courtyard by Marriott Prince George review.

The menu is well thought out with hip and fresh dishes typically reserved for cities not named Prince George. This was a welcome surprise and the meals themselves were surprisingly good and relatively cheap, something not common with hotel restaurants. 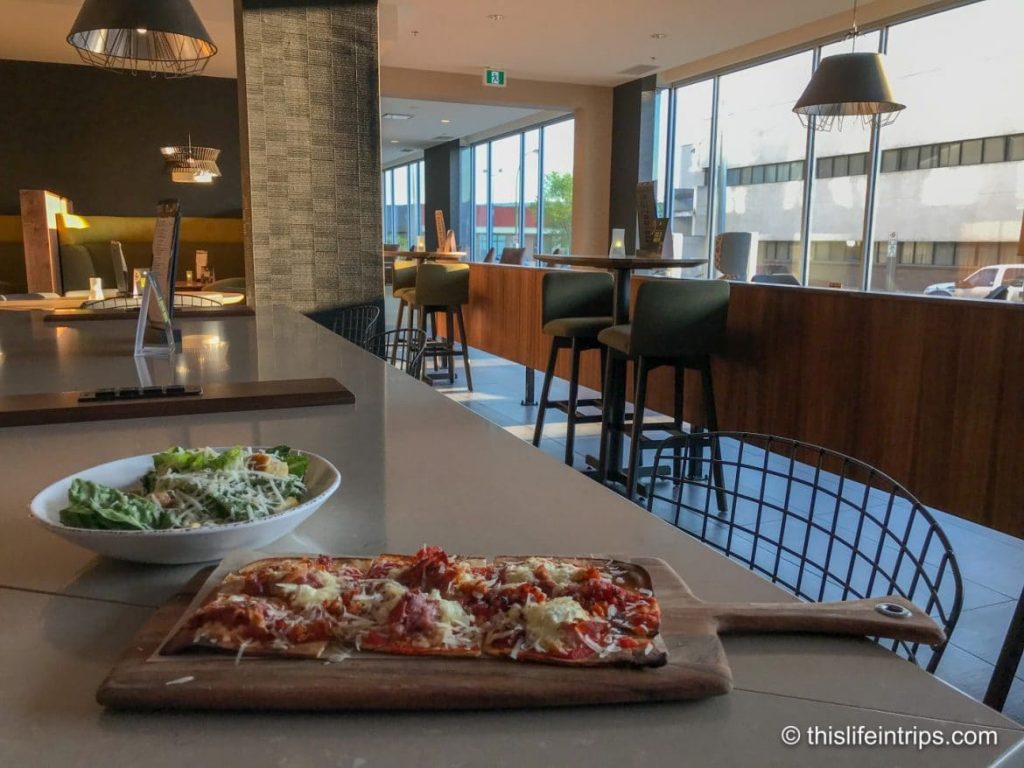 There is also a great beer selection…or so I thought. Turns out they were still trying to acquire their liquor licence during my visit. So, over sips of ice water and bites of my smoked salmon flatbread, the lonely waitress and I had something else to break our awkward eye contact over.

If you Must Go, Stay Here

I feel bad slamming any place, especially a Canadian one, but Prince George is hard to love…at least for this visitor’s first (second, and third) impression. Still, there is clearly enough business and dare I say, tourism, to warrant a hotel like this. At a competitive rate to far inferior hotels in the area, this Courtyard by Marriott Prince George review taught me that staying here is a smart, comfortable, and clean win.

What say you?
Thoughts on this Courtyard by Marriott Prince George Review?
Let’s hear it! 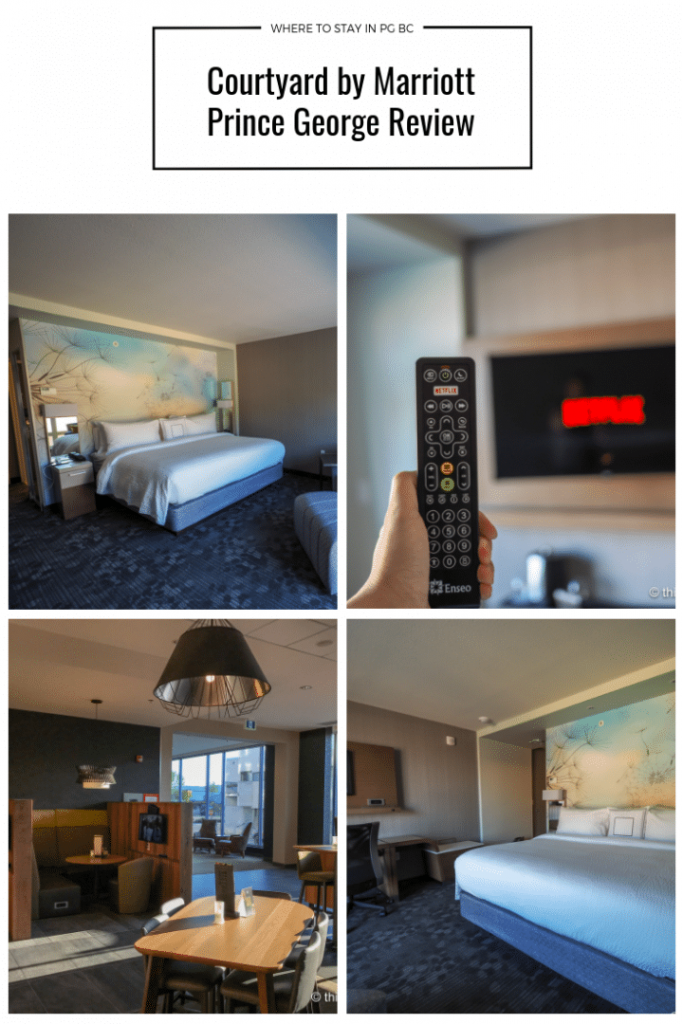 So how does the Courtyard by Marriott Prince George rank?