After checking into our Priceline won hotel (JW Marriott Union Square for $90 dollars!) we headed out to try and catch the tail end of the North Beach Festival. From what the concierge told us, the North Beach Festival is an outdoors event with street performers, art installations, and plenty of great food vendors. Perfect. By the time we arrived, however, everything was shut down. All that remained were hundreds of drunk college kids stumbling about. It was like some sort of weird drunken zombie apocalypse. We settled/took refuge in a quiet Italian bar and enjoyed some vino and fresh pasta while discussing our short layover. With a full bonus day in San Francisco, we debated what to do. We have been to San Francisco a few times so have already covered much of the tourist spots. Strolling Haight-Ashbury, known as the hippie epicentre, was something we had yet to experience. Sold.

The next morning we left out Union Square hotel and waved goodbye to the Powell Street trolley, somewhat of a guilty pleasure of mine, and headed west. Next time trolley. Next time.

Lined with funky cafés, bars, record shops, bookstores, and shops selling tie-dyed T-shirts and pipes it is easy to see that the spirit of the ’60s is still alive at Haight-Ashbury. This of course includes hippies, although they appear to be more like happy homeless people now. Same same? Nevertheless, we enjoyed a day of window-shopping and politely saying no to panhandlers. At the middle of it all is the intersection of Haight and Ashbury. This famous intersection was the meeting point for many who were coming to find peace and love in the ’60s. Now people come to take a picture and maybe have a scoop of ice cream at Ben and Jerry’s. Sad face.

Even though a lot of the stores in the area have changed, the Victorian-style homes remain – and they are beautiful:

Haight-Ashbury isn’t just the birthplace of hippies, it is also home to many big names in the entertainment industry. Along with easy access to mind-altering drugs in the 60’s came Psychedelic Rock. Janice Joplin, The Grateful Dead, and Jefferson Airplane all loved and lived in the Haight-Ashbury district. Along with drugs came the Hells Angels original HQ and, not surprisingly, Fear and Loathing in Las Vegas author Hunter S Thompson who once lived nearby.

With so many famous folks once calling the area home we decided on strolling Haight-Ashbury to see where they lived. For a self-guided walking tour we turned to Wikitravel and found this interesting list of addresses:

Our day ended with a stroll through Alamo Square Park where I said  hi to DJ Tanner  and the famous Painted Ladies. San Francisco guilty pleasure #2. 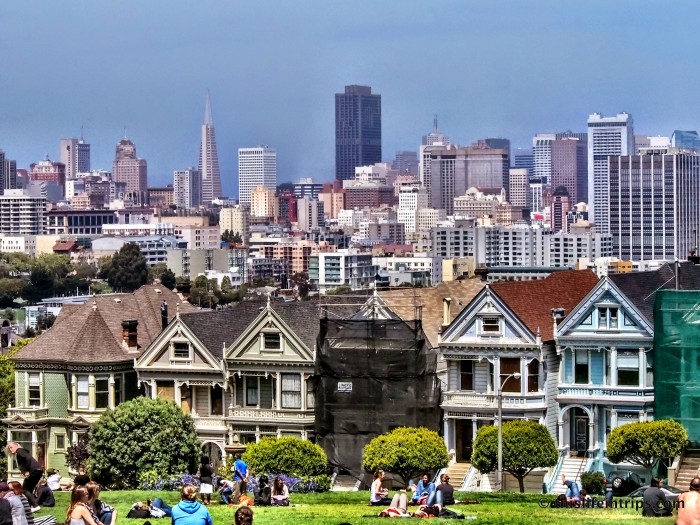 Those tired of San Francisco’s tourist traps head west for a leisurely day through one of the city’s most famous neighbourhoods. Strolling Haight-Ashbury (or biking) on a self-guided tour of the famous houses in the area is a great way to see the area as well as America’s subculture past.