Here it is. My favorite itinerary for my favorite volcanic island in the middle of the Atlantic – How to do Reykjavik in 3 days. This northern capital city is an ideal stop over when heading to/from Europe as you can see a lot of the country and the capital in a short period.  Adding the stop will also break up that long flight across the Atlantic. You’re welcome. How is it possible to have a stop over in Iceland? Because Icelandair is awesome. The national carrier allows up to a 7-day visit in Iceland at no additional cost. Also, they offer great rates!

With this in mind, I was able to convince newlywed friends of mine to tag along on my recent Iceland stop over. They were on their way to France for their honeymoon and I was starting an around the world tour. By the by, who crashes a honeymoon?

But I digress. Here’s our Reykjavik in 3 days itinerary that gives a great taste of Iceland’s sights, lights, booze, and eats.

Day 1 – Curing Jet Lag by Partying Like a Viking

The four of us arrived early in the morning, jet-lagged but ready for Iceland. Best way to shake off that eight-hour flight? Soaking in the world-famous Blue Lagoon. Buses can whisk sleepy-eyed travelers to the nearby oasis on their way to/from the airport. This is your best bet if you do not have your own car as the Blue Lagoon is a 45-minute drive from town and is somewhat between there and the airport. Purchasing a ride plus a ticket to the lagoon in advance means you can bypass the sometimes lengthy queue upon arrival. Plus it gives you that VIP feeling passing those waiting in line. 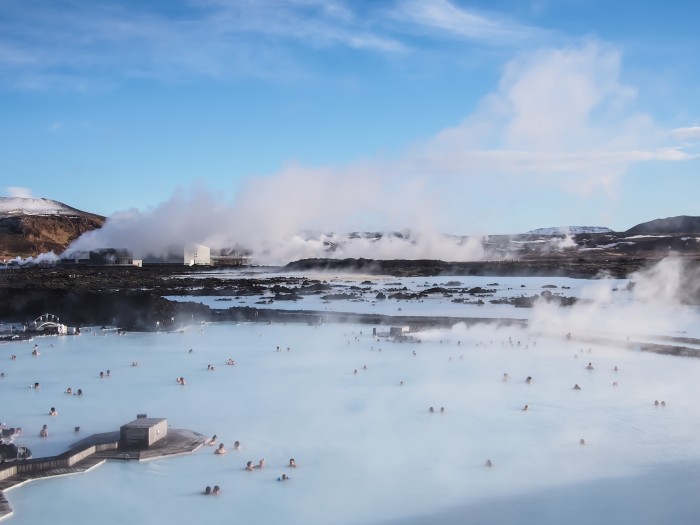 I visited the Blue Lagoon in 2006 but had forgotten how massive the pool itself is. I also forgot that silica from the lagoon is collected, filtered, and placed in barrels for guests to use on their skin – which makes it feel amazing. For some reason I thought I had scooped the white stuff from the pool floor and used that instead. Before we found the barrels I convinced Glenn, my newlywed travel partner, to cover his face with silica from the bottom with me. It was like smearing a fart on your face. After washing the stinky stuff off and applying the goods we relaxed in the blue waters, enjoyed the saunas, and rinsed off under the geothermal waterfall.

This place is heaven.

The blue Lagoon does offer extra services like massages, restaurants, etc.… however we passed on those and decided to enjoy the sunshine and ridiculously comfortable recliners in the solarium. There we napped. Hard. 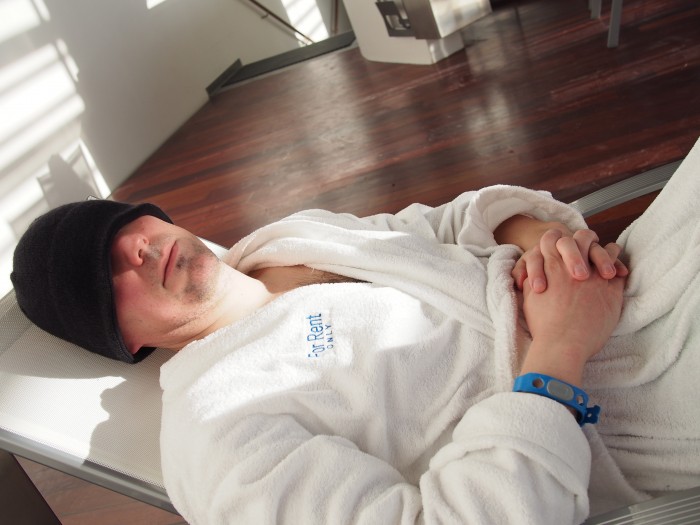 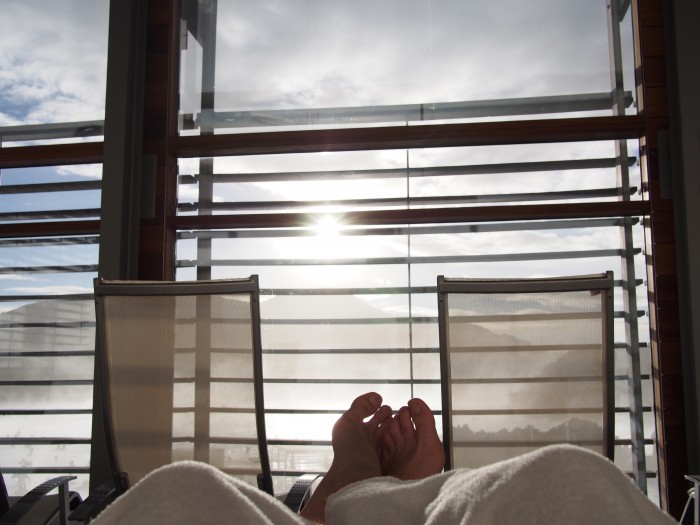 Refreshed and rejuvenated we headed into town and checked into our super retro, super cool accommodations – The Kvosin downtown hotel. This awesome apartment style hotel has an incredibly laid-back feel and is ideally located in the heart of Reykjavik. For full review on this great property see here.

Bags unloaded we headed out in search of an odd Icelandic specialty, the hotdog. Although not originally from the island, Icelanders fell in love with this American ballpark favorite years ago and have truly made it their own. I can honestly say I have not had a better hotdog then those found in Reykjavík – and I’ve eaten a lot of wieners. Hey oh! 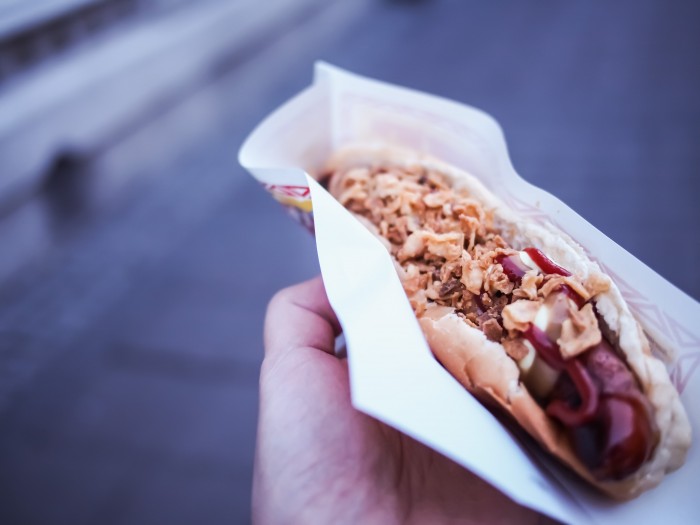 Conveniently,  Bæjarins Beztu Pylsur, Reykjavík’s most famous and popular hot dog stand, was located a couple blocks from our home away from home. We arrived to find a que but it moved fast as workers in the tiny shack quickly handed out hot dogs to hungry customers. Fresh buns, fried crispy onions, and an array of tasty condiments set this street food apart from its fatty North American cousin. A stop here is a must for those looking for a tasty cheap snack or meal in an otherwise pricey city. 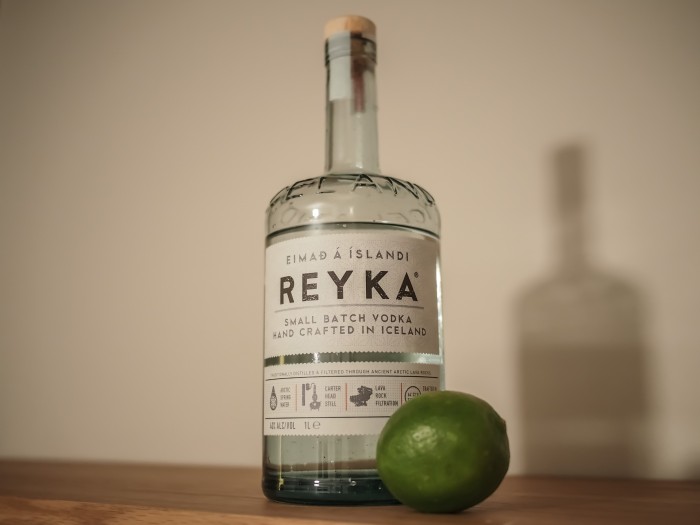 Bellies full we headed back to our apartment for a few pre-drinks. It was after all Saturday night, and Saturday night in Reykjavík is done proper – Reykjavik in 3 days over a weekend is recommend because of this. All of us were exhausted but decided the best way to get over the jet lag was to power through. Fueled on Reyka Vodka, possibly the best vodka I’ve ever tasted, (Side note – pick up booze at the duty-free on your way into the country. It can be much cheaper) we headed out to bar hop the busy Laugavegur Street.

I’m not exactly sure what happened next.

I remember yawning and looking at my watch thinking the malt beer in my hand would be my last drink of the night. That was at 11:45 PM. Next I was hanging off a local in the middle of the street talking about Bret Hart as if I knew anything about wrestling and had something knowledgeable to say on the subject. It was 5 AM. Beer in one hand and a bacon wrapped hot dog in the other, I stumbled my way down Laugavegur Street with flocks of other late-night partygoers. The taste of Brennivín, Iceland’s hard liquor of choice, brought back images of getting shots at a hip bar. I remember Glenn playing a wheel of fortune-esq type drinking game and winning 10 free beers…then dwarfish Icelandic elves stealing half of them. This was later confirmed. It happened. Also, was I really playing matchmaker for love-struck Iceland boy? 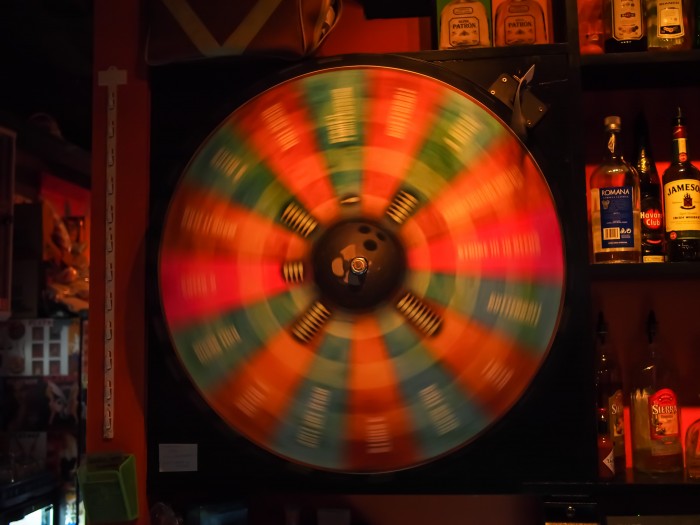 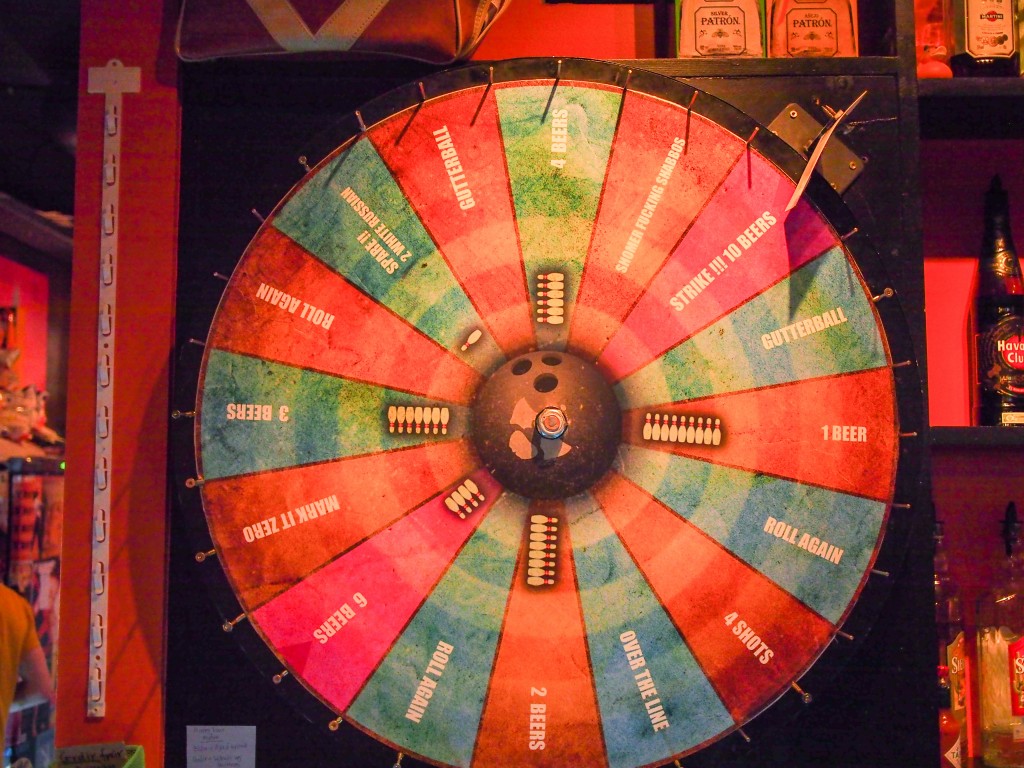 Day 2 – Walk the Walkable City, Hangover and All.

You think this late-night would’ve cured our jet leg. Not the case as we were wide-awake (and still drunk) five hours later. You may have better luck, however for us – blarg. On the plus side, there was still plenty of winter daylight available for us to see some sights. We strolled the incredibly stroll-able streets, popping our heads into various shops and cafés along the way. Reykjavik is full of them. We wandered past locals feeding the massive ducks at the picturesque Tjörnin pond before heading to my favorite church in Europe – Hallgrímskirkja. An absolute must when visiting Reykjavik in 3 days. The last time I was in town I did not take in the view from the top. I would not make this mistake again. From the top, you get a beautiful view of the entire city and the surrounding mountains. It really is stunning and worth the kroners. 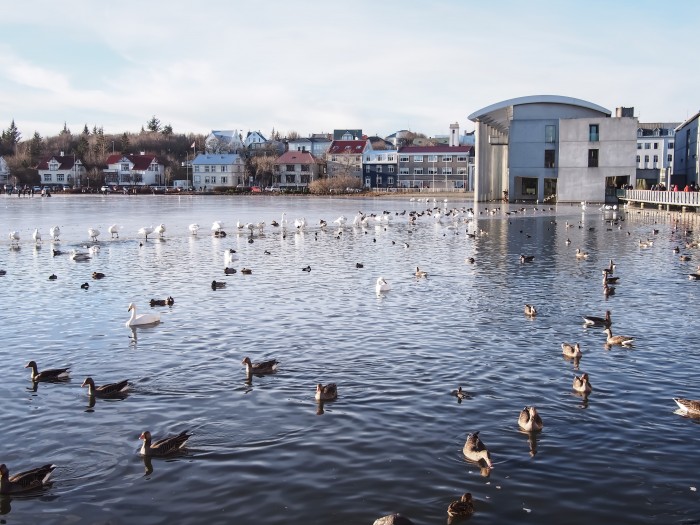 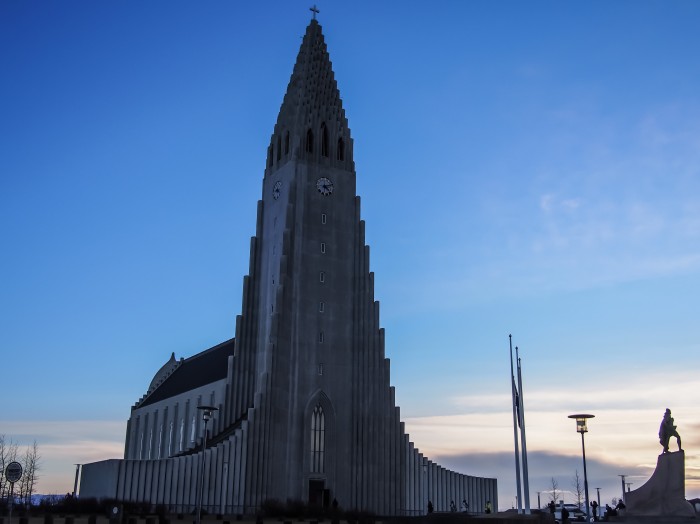 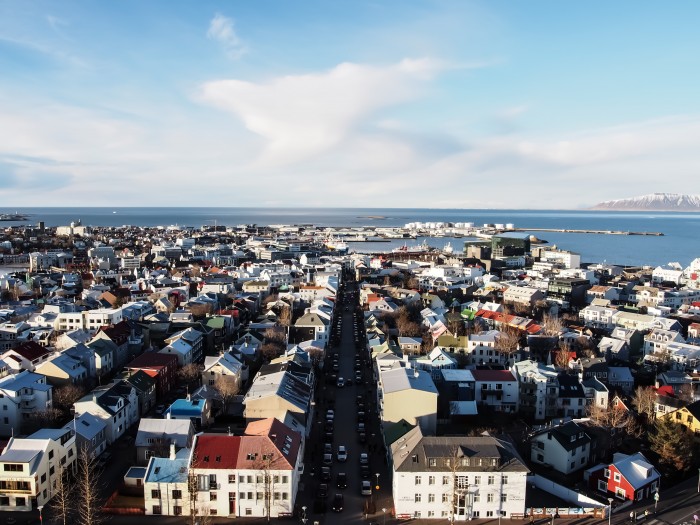 We continued visiting unique Icelandic shops on our way to the very cool Solfar sculpture. I remembered really liking this Viking looking ship on my last visit. What I didn’t remember was it being so far from the main street. I will chalk that up to the slipped disc in my back as walking became less fun from then on. Still, we pressed on passing the colorful convention center and the marina before stopping in at Reykjavik’s best fish and chip restaurant – Icelandic Fish and Chips. There are many (MANY) great restaurants in Reykjavik. Icelandic Fish and Chips is one of them. 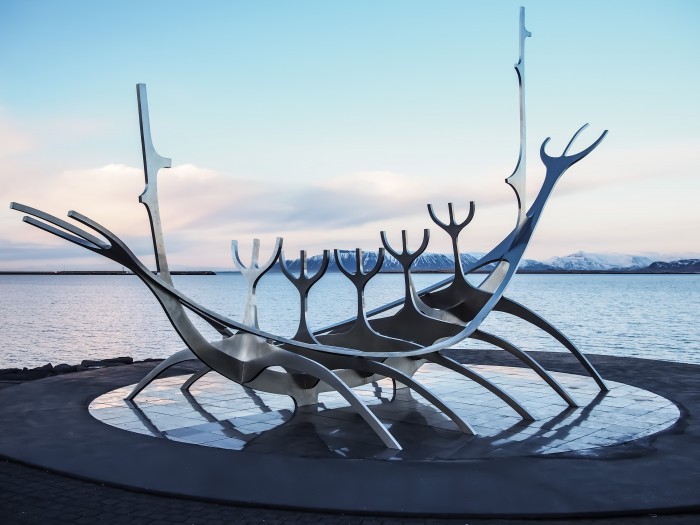 Stuffed, we headed back to our comfortable apartment to relax. No late-night drinking for us as we had a Golden Circle tour booked in the a.m. We did head out to the pond later that night to watch the northern lights dance high above Reykjavík. It was not the best late show I have seen but pretty good for being above the city. No expensive trip out-of-town needed here. If you want to make the aurora borealis a part of your Reykjavik in 3 days stopover be sure to visit in the fall or winter.

The next day was jam-packed thanks to the Fontana Geothermal Baths and Reykjavík Excursions. We left bright and early (or dark as sun rise wasn’t until 9 am or so) for a bus tour of the Golden Circle which highlights some of Iceland’s best natural sites. 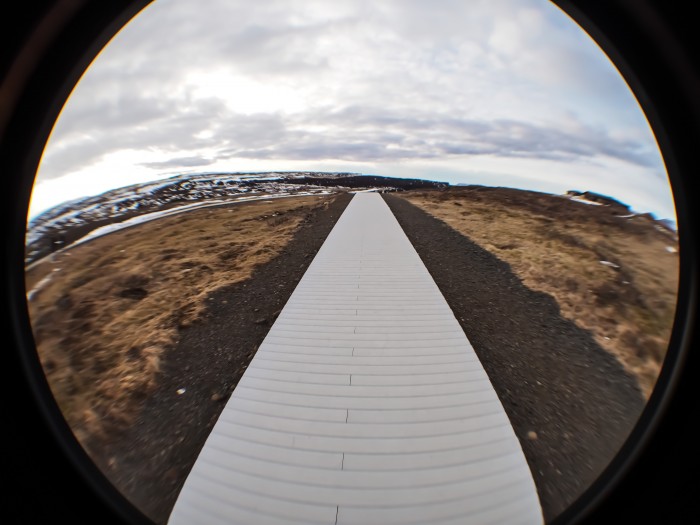 The Gullfoss falls, one of the biggest in Europe, is an amazing sight and was our first stop. I have now had the pleasure of seeing it both in the summer and winter, the latter being more interesting with parts of its waters iced over. Either way it is a must see when visiting Reykjavik in 3 days. 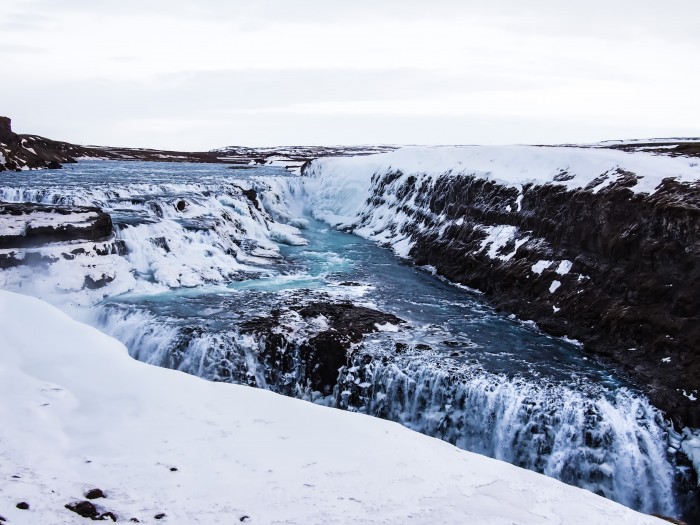 Next up was the geyser, the original in which all others are named. What’s not to love about boiling water shooting from the ground? So wonderfully odd. 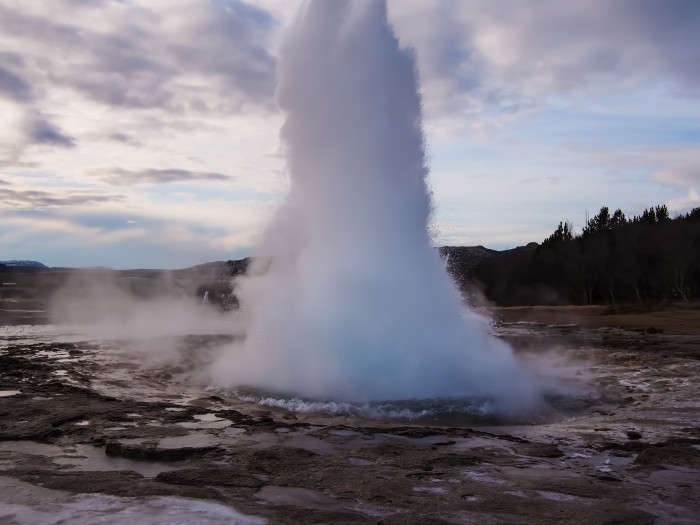 A bonus stop for me was a roadside Café next to a stable with Icelandic horses in it. I had yet to see this small but impressive looking animal even though I have been told that they roam free and can be an expensive Icelandic speed bump. 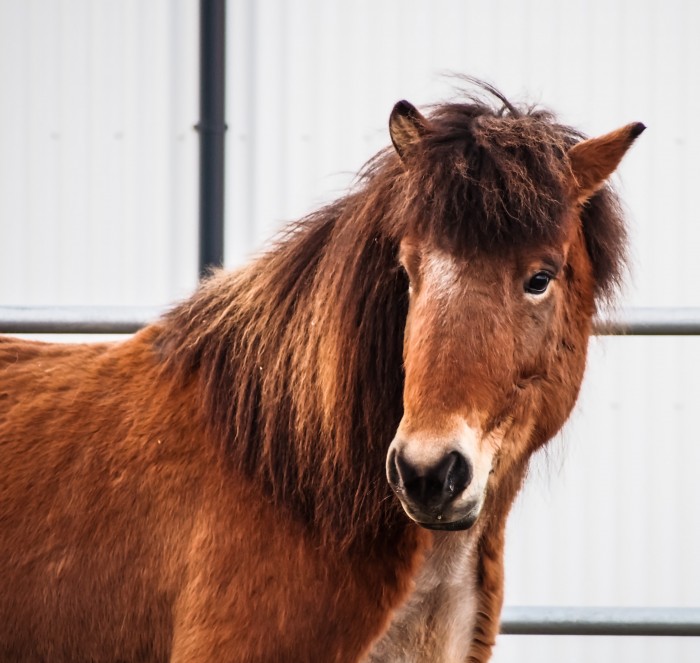 We then stopped for a warm soak at the Fontana geothermal baths. I highly recommend visiting here as it is somewhat discrete yet easily accessible on the Golden Circle path. For a detailed review on this wonderful spot see here.

Last up was that the Thingvellir national Park which is known for Iceland’s first parliament building as well as where the continental plates of North America and Europe meet. In 2006 my brother and I visited this spot via rental car. Being on our own we assumed the narrow canyon we walked down was the fault line. I remember really liking that thought. On this trip our tour guide corrected me on this. Turns out the valley is the division, making it somehow less personal. Sometimes ignorance is bliss. 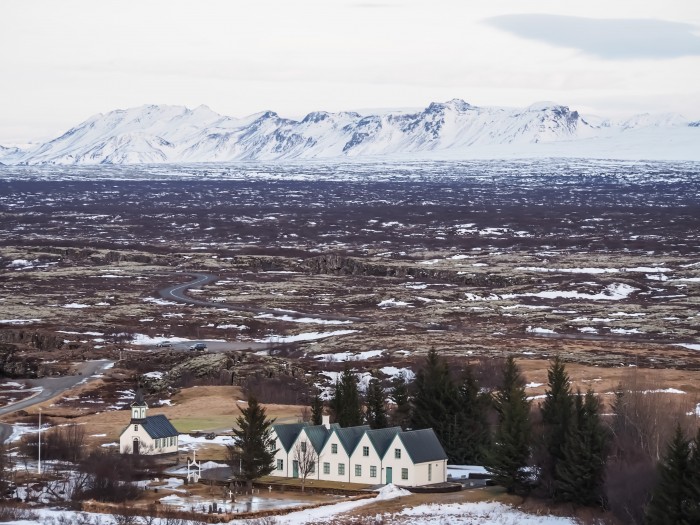 With that we ended our three days in Iceland. Considering our jet lag fueled drinking we packed a lot in. You can see how you can too. Reykjavik in 3 days is easily doable, whether you live on the west coast of Canada or Eastern Europe. Iceland is within reach and it is one of the few countries I would not hesitate to return to again and again.

Reykjavik in 3 days has been brought to you by KeepGo – literally. Thanks to their global 3G data coverage I have been able to easily bring you these pictures and words while I bounce my way across the globe. For information on how you can get your own KeepGo SIM card see below: