My first pass through Austria wasn’t anything to write home about food wise. I remember stopping in for schnitzel and thinking it was just “meh.” This time around I was out to prove otherwise with my Austrian eats selections. What I found was very hearty meat and potato dishes that were both tasty and extremely filling. In the end, I was well fed and am more than happy to share these Austrian eats with you.

This traditional Austrian eats dish is served as a snack but eats like a meal. It typically consists of a hollowed out baguette style bun with toppings and sausage stuffed inside. Try Bitzinger for a true Austrian eats experience! 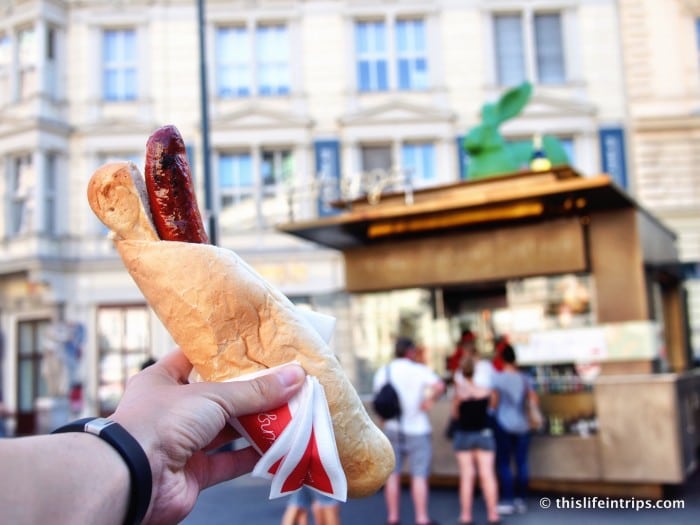 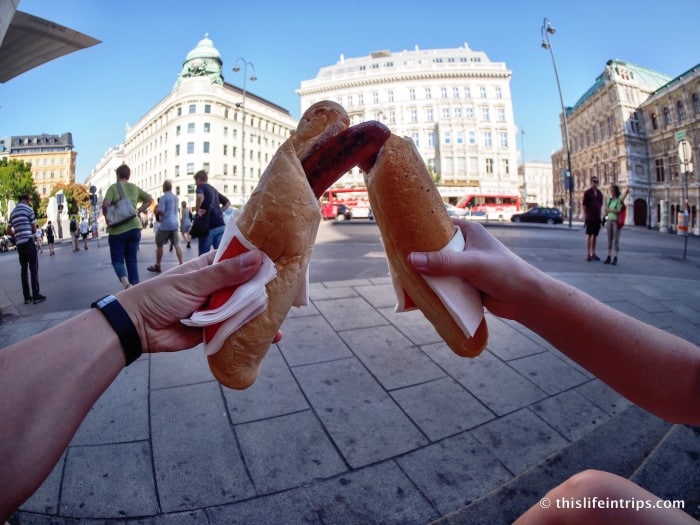 While seeing what Vienna has to offer beyond museums we stumbled on the Music Film Festival in front of the City Hall. This impressive setup includes music concerts shown on a massive screen for all to enjoy a free of charge. It also included some amazing beer gardens and Austrian eats. I gravitated towards Spätzle with cheese, a dish I first fell in love with while visiting Lichtenstein. This cheesy pasta dish sticks to your ribs and pairs beautifully with a cold Austrian beer! 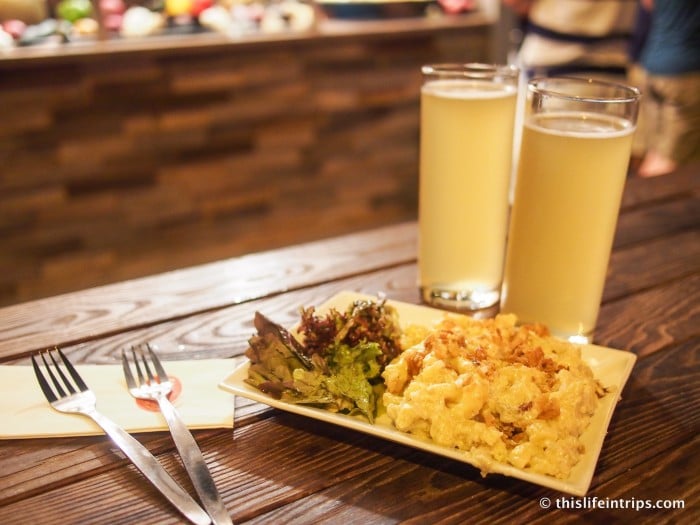 Even though I wasn’t impressed my first time around I gave this famous Austrian eats a second chance, and man I’m glad I did! What was missing last time was the side potato salad that it’s traditionally served with. This gave the somewhat dry and flavourless dish some serious taste. Plachutta’s Gasthaus zur Oper is one of the better-known spots to try this Austrian eats specialty and was instrumental in winning me over on schnitzel. 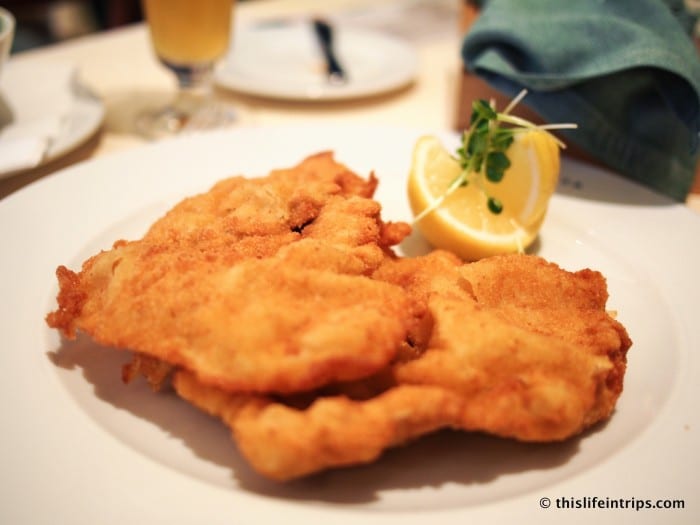 To be fair, I haven’t met a smoked meat I haven’t liked. This Austrian eats, however, is amazing. So much so that while visiting a friend in Graz I ended up staying later than planned drinking wine and eating this smoked meat. This resulted in forfeiting a train ticket and leaving in the morning instead. No regrets. 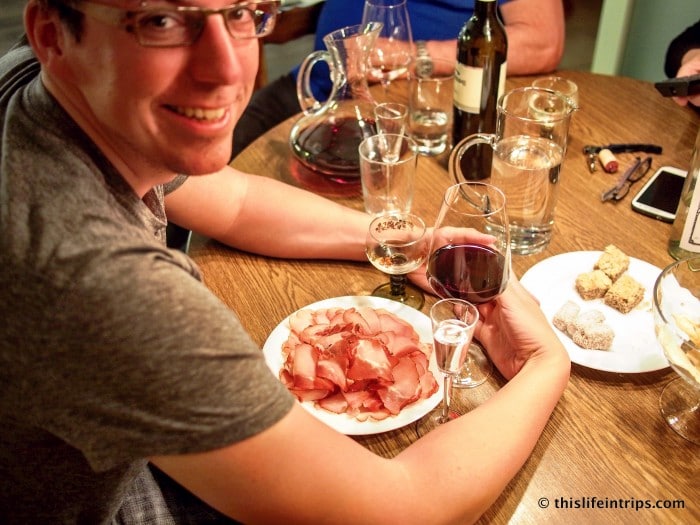 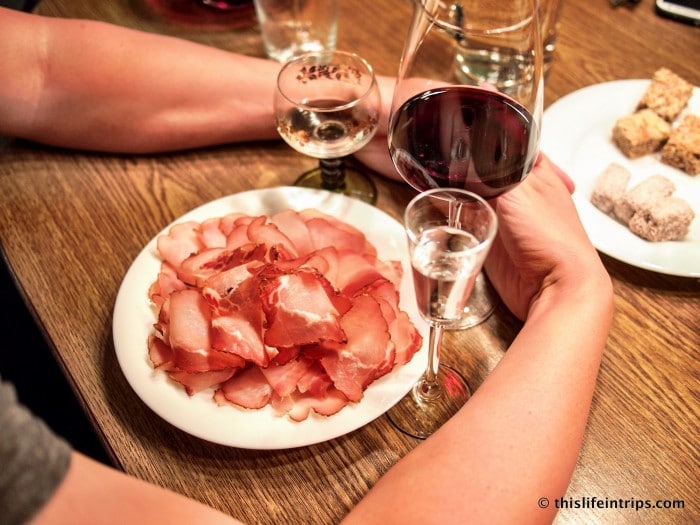 Whoa. Think meatloaf but trashier…and yes, that is possible. It’s a processed mix of pork, corned beef, bacon and onions and is as delicious as it sounds. This Austrian eats dish comes in a few log forms but I stuck to cheese and in a bun. This quickly became my cheap go-to snack option. I don’t even want to know how bad it is for you. 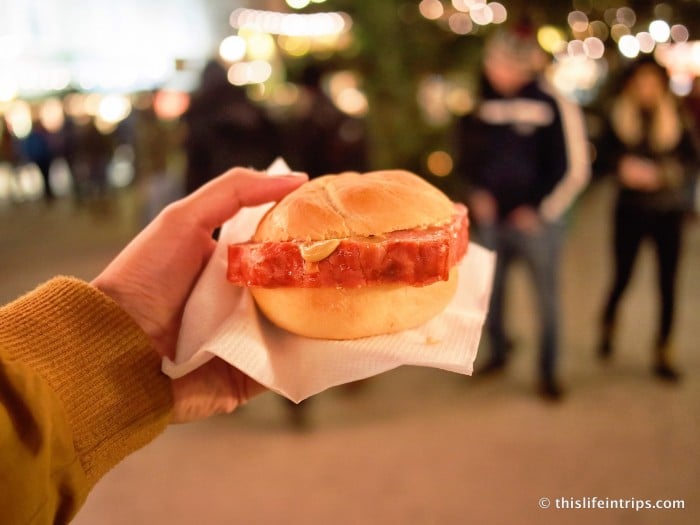 Although it is originally from Switzerland, I enjoyed this dish for the first time in Austria. Raclette was described to me as a cheese and potato dish. In my simple mind this meant a casserole. After our night of Austrian wine and smoked meats went late, so did our dinner plan of Raclette. “We can just have it for breakfast” I said to Elfried, our over-the-top hostess. Too kind to say otherwise she agreed. Boy did I feel like an asshole the next day when I saw how much preparation and work goes into making Raclette. Tasty though! Think open face sandwich makers meets fondue – only was really stinky/really delicious cheese!

Lastly on this Austrian eats list, let’s not forget the beer! Some of the best I’ve had on my tours – and I’ve had a few pints! 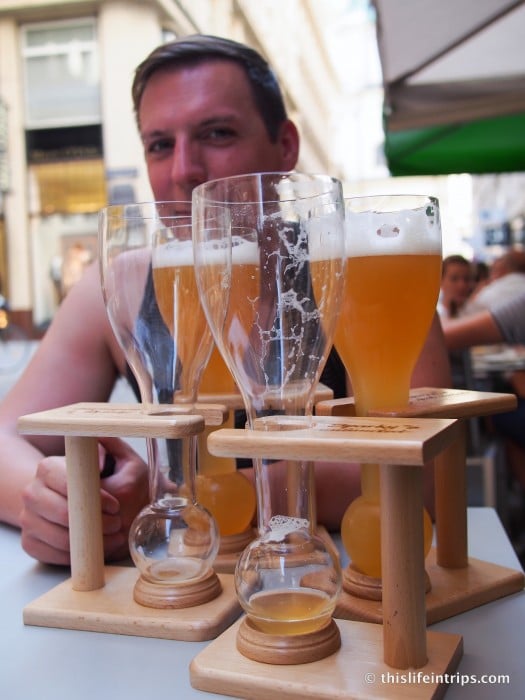 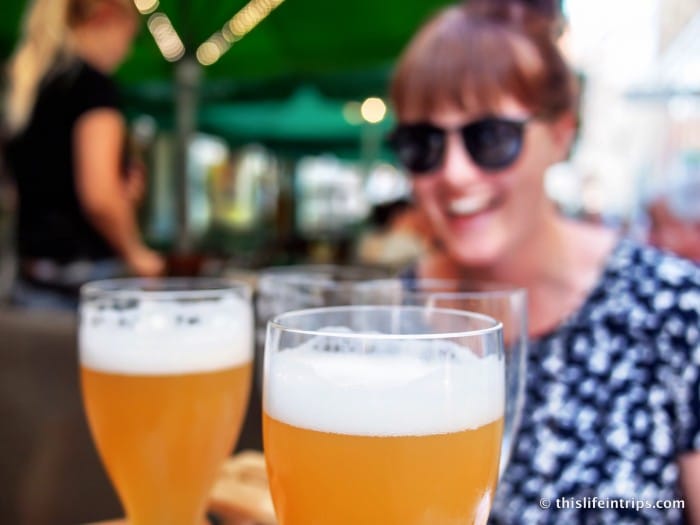 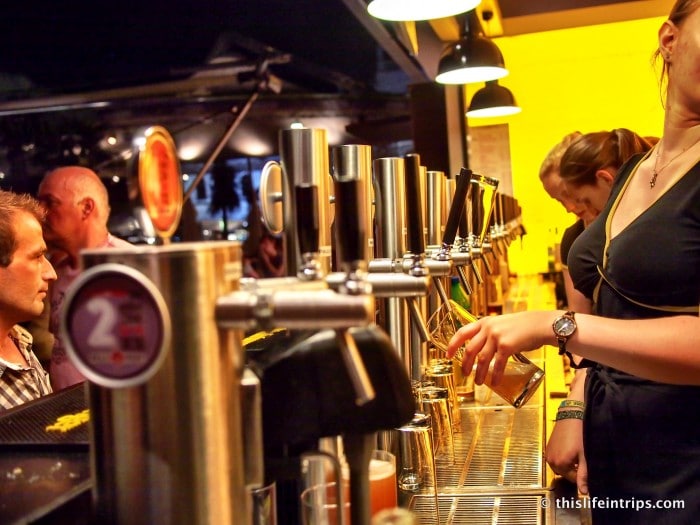 What say you?
Thoughts on these Austrian Eats?
Let’s hear it!

For more foodie posts from Europe and beyond see HERE. 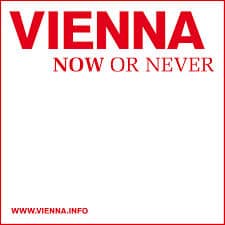 Although I was provided an Austrian Eats experience curtesy of Vienna Tourism,
the experience, opinions, and second opinion on schnitzel are my own.