When I first visited Amsterdam I remember thinking that the food was bad. Really bad. To be fair I had just come from Italy where I was on a steady diet of mind-blowing pasta, calzones, and espresso. Also, I didn’t really venture off Damrak Street which, like any 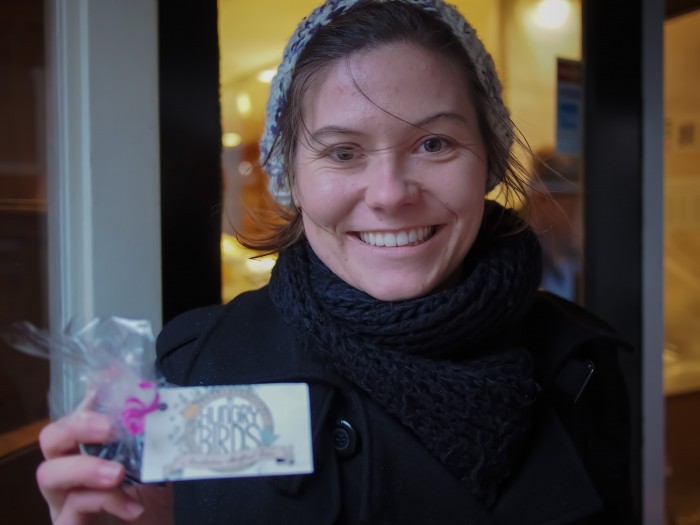 tourist area of any town, has some questionable restaurants – ones that focus on quantity over quality and survives on the heavy foot traffic out front.

Still, the Netherlands is not known for its cuisine. For example, can you name twelve (or three) Dutch dishes – excluding pommes frites covered in mayonnaise, poutines shameful cousin?

What Makes Amsterdam a Foodie City?

If you could name more than Gouda and droppies, two things that are not dishes, you did better than me. What I did have in Amsterdam which I have yet to find comparable elsewhere is Shawarma. It was so incredibly good we ate it three days in a row. For over eight years now I have tried Shawarma across the globe (excluding the middle east) and have yet to find one comparable. This made me wonder, is food in Amsterdam really as bad as I thought? I decided to enlist the help of Hungry Birds for an Amsterdam foodie tour to help answer this question and others, like what is an Arabic dish like Shawarma doing in Amsterdam in the first place?

“This is because Amsterdam is a very international city” explains our Amsterdam foodie tour guide over the first dish of the day. Zosia, a transplanted Polish girl with a serious love for street food is eager to show off Amsterdam’s hidden gems. She had recently returned from Southeast Asia where she fell in love with the roadside dishes found in Vietnam and Thailand. This made her think about the diverse food scene in Amsterdam and the potential to share it with others. With that in mind, she teamed up with her food-loving friend Esther-Hanna to create Hungry Birds, a food walking tour designed to showcase Amsterdam’s local delicacies as well as ones that have been imported and made their own. 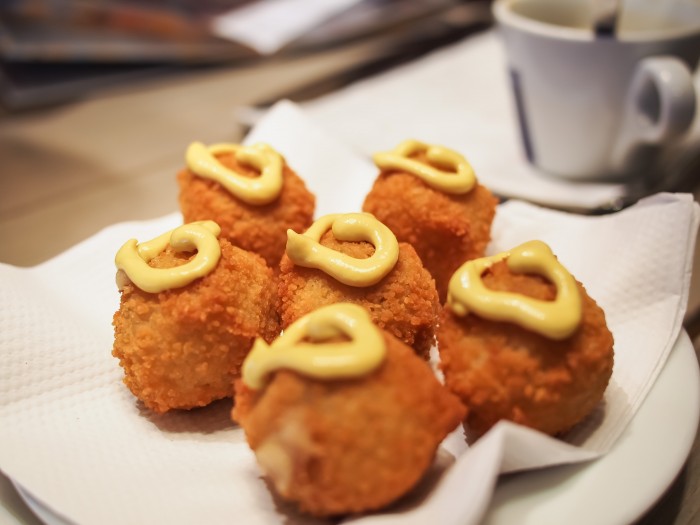 Zosia goes on to explain the melting pot culture that makes up Amsterdam and the wonderful flavours that come with it. Totally makes sense, but I’m not listening. I’m fixated on the golden-brown globe of minced veal and spices sitting in front of me. “Bitterballen eh?” I say slow and low in my head. Clearly, I mouthed the words at the same time as Zosia has now paused what she was saying and is looking at me a bit perplexed. “You can try,” she says nudging the plate towards me.


I know that they are too hot to consume but pop one in my mouth anyway, burning the roof of it in the process. I decide to let the next one cool off a little before enjoying it…and enjoy it I do. Turns out these mustard topped balls are delicious. They should be as Zosia took us to Van Dooban which is famous for this great dish. Turns out I really like’bitterballen.’ We would later have the Dutch snack three times in Thailand of all places. 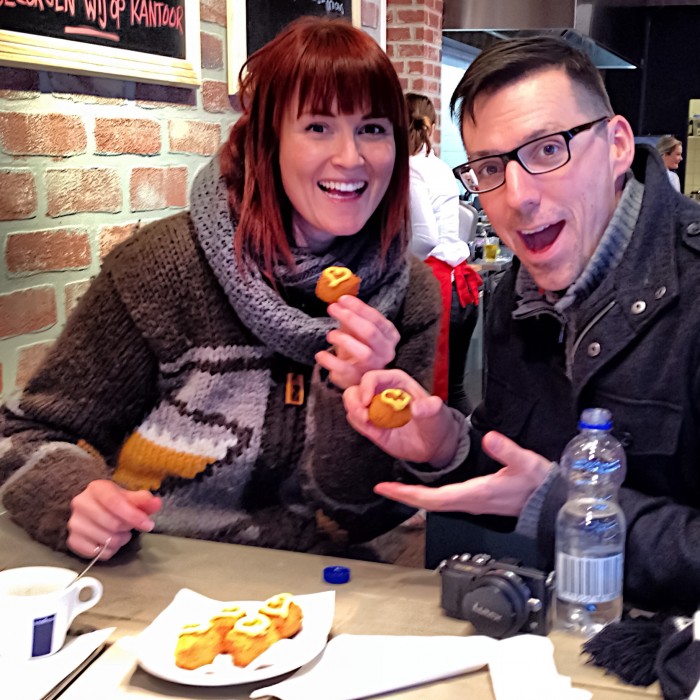 Once the last crumb was gone I was able to focus my attention back on Zosia. She explains Amsterdam’s history and how the mix of ethnicities and great food available because of it came to be. This fascinates me, mostly because of the way food and culture mix but also because of how enthusiastic Zosia is on the subject. She then gives us a rundown on our tour route and tells us that we will be sampling a wide array of dishes. By this point, I have already decided that I like Hungry Birds. She then asks if we are hungry to which I nod my head. “Good!” She replies. “There is a lot of great food on this Amsterdam foodie tour!”

I had no idea how much food this actually meant.

On our way to the next stop we chat about travel and the mutual destinations we have been to. After each country listed Zosia followed with an enthusiastic “did you try…!?” Her passion for food is evident. Clearly, our pallets are in excellent hands.

Next up was Tjin’s, a convenience store famouse for its delicious takeaway and international goods. This cute little family-run shop has served home-made dishes with Asian and South American flavours since 1980.”Today we will be sampling Broodje Pom” says Zosia before placing the order. She goes on to explain the chicken filled sandwich topped with citrus juice, pomtajer (a vegetable root similar to sweet potato) hot pepper sauce, and ‘zuur’, a spicy pickled cabbage-onion relish. After my first bite, I understood why so many people were coming and going from this tiny convenience store. This sandwich is the real deal. 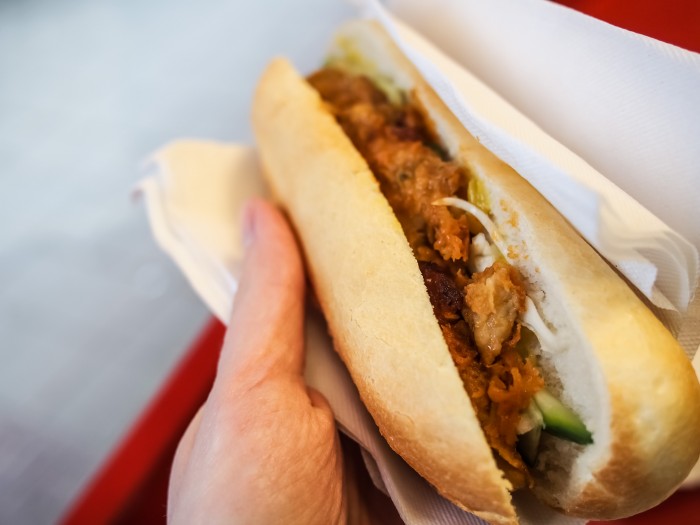 It was also big. I made the mistake of eating it all and with that my seventh biggest fear came true, two stops into our Amsterdam foodie tour and I was full. 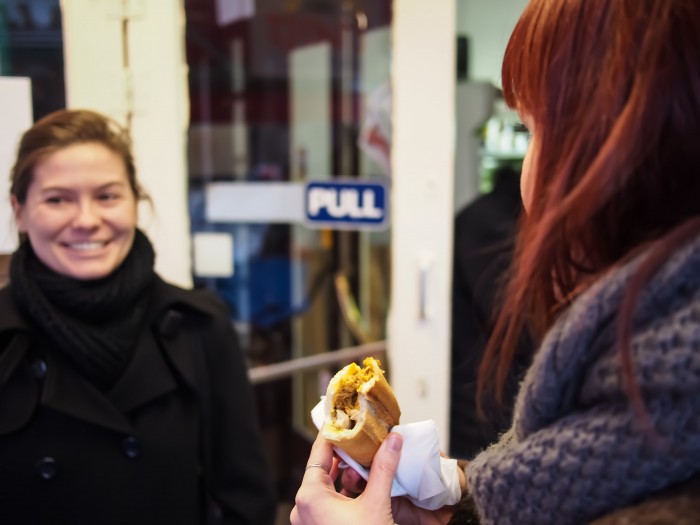 Thankfully we had a bit of a walk through the Albert Cuyp market until our next stop. We strolled through the large market filled with food and flower stands while receiving a history lesson and how it has morphed into more of a tourist trap than a local market, a common theme in most well-travelled cities. Still, Albert Cuyp Market has a charm with its seemingly endless tulip and cheese stands mixed in. Once we arrived at the Stroopwaffle stand Erin and I could only share this incredibly sweet and unique Netherlands treat. Guess we hadn’t walked long enough to make a little more room. Too bad because it is delicious and the best in the area. 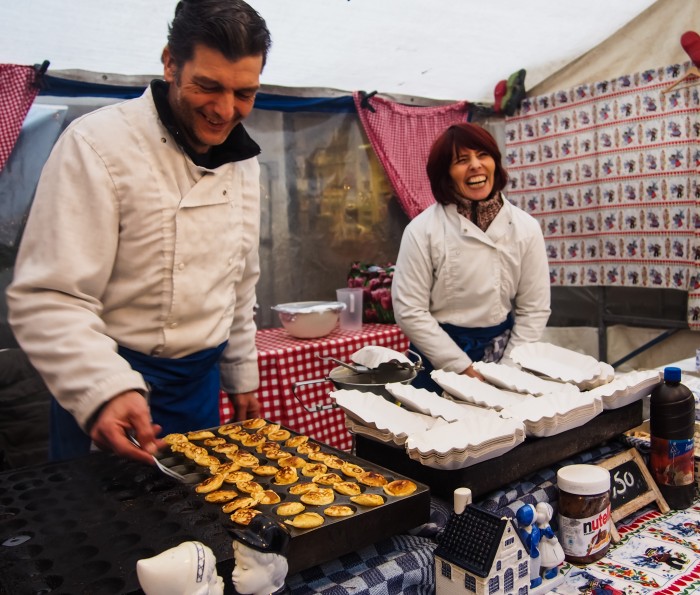 Although stroopwafels’ are amazing, they are a tad too sweet for my taste buds. Thankfully my not-so-sweet tooth was happy with our next dish,  Poffertjes. These tiny, fluffy, Dutch pancakes covered in butter and powdered sugar are right up my alley. Love me some pancakes. I die. Syl & Henk, the cute couple in the picture, are only at the market three times a week so we were lucky to visit when we did.

What’s an Amsterdam foodie tour without a little cheese?  The market has plenty of stands where you can sample local cheese so thankfully our trusty tour guide knew where the ‘gouda’ stuff is. Sorry. As if there is bad gouda. Zosia did take us to a wonderful cheesemonger named Floris (side note, great name. Floris the Cheesemonger) who gave us a little taste and education on the different types of Gouda Cheese. 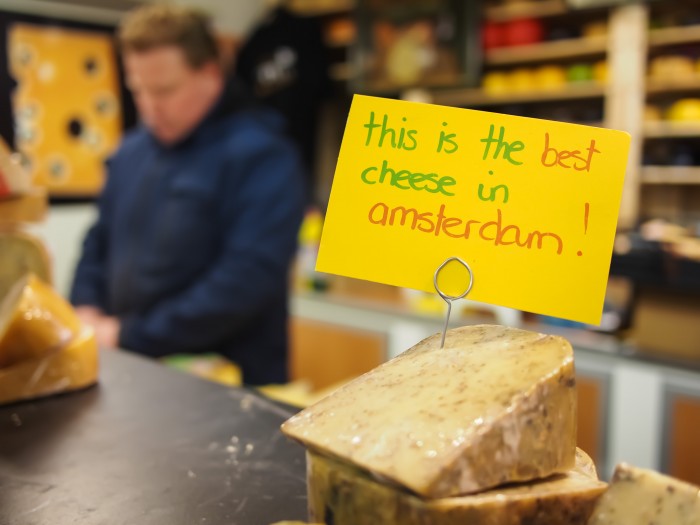 We said our goodbyes to Floris the Cheesemonger and headed to my favourite stop of the tour, more for the story than the actual dish itself. Zosia took us to a Suriname restaurant for Saoto Soup, a dish with a past. Suriname, the small country in South America that thinks it is in the Caribbean, was originally a Dutch colony.

After slavery was abolished in 1863 the country was left with a workforce shortage. This was filled by contractors brought in from Indonesia, another Dutch colony.  Along with these workers came ingredients from the far east. The mix of these cultures (African, Indonesian, & Dutch) can be found in this soup. Before Zosia explained the components of the dish I could tell it was unique. The broth, vegetables (beans sprouts, fried potato, onion, shredded cabbage, etc.), boiled egg, vermicelli noodles, and herbs and spices all come from different corners of the earth and now were coming together in my mouth…in Amsterdam. I was absolutely stuffed but couldn’t stop eating because of how interesting the flavours were. It was like tasting history.

How cool is that? 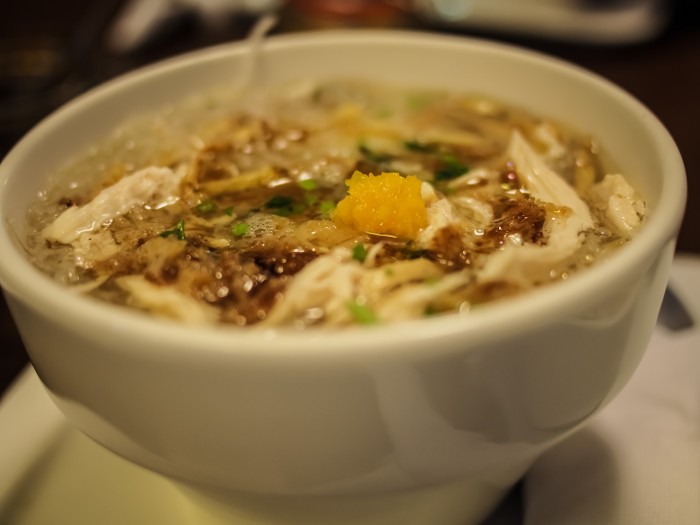 I would never have thought about eating Suriname food or known about the history of this small country. Thank you Hungry Birds. This was a wonderful thing.

Next up was the most traditional dish of the tour, raw herring served with onions and gherkin pickles. Little tents are sent up around the city on bridges overlooking the picturesque canals where locals and daring tourists can sample this delicacy. Nice view but it is a bit odd because it gives the impression these little fishes are plucked from the waters below and I’m not sure anybody would ever want to eat anything coming out of Amsterdam’s canals. But I digress. 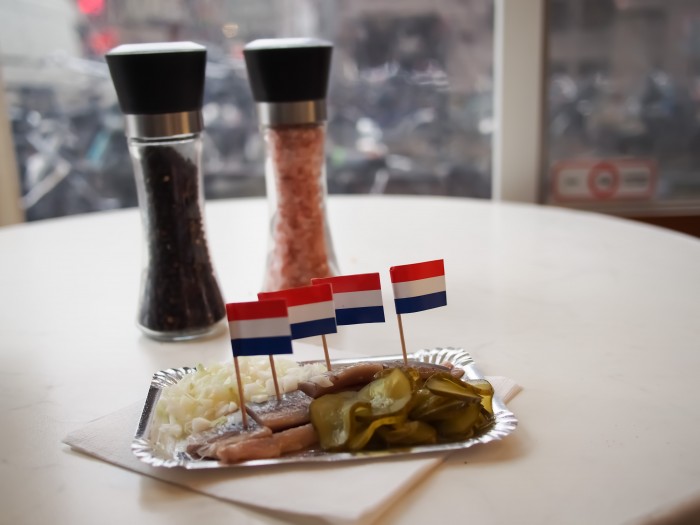 I was hesitant but tried not to show this because, well, “I’m adventurous,” or at least I like to give that impression. I choked back the first bite while trying to keep a calm and cool face. This was all for not as it turns out I like raw herring. Who knew?  You could tell Zosia was happy with this as her eyes widened with anticipation as we took our first bites. Salty and chewy but great when covered in onions and pickles. An Amsterdam foodie tour must, even if you are not a sushi lover…or “adventurous.”

We ended our day with some sweets from Puccini Bomboni’s. There we sampled delicious homemade chocolates made from all-natural ingredients in interesting flavours such as black pepper and rhubarb. You could taste the lack of preservatives. A great stop for chocolate lovers as this shop is one of the best chocolatiers in the world. 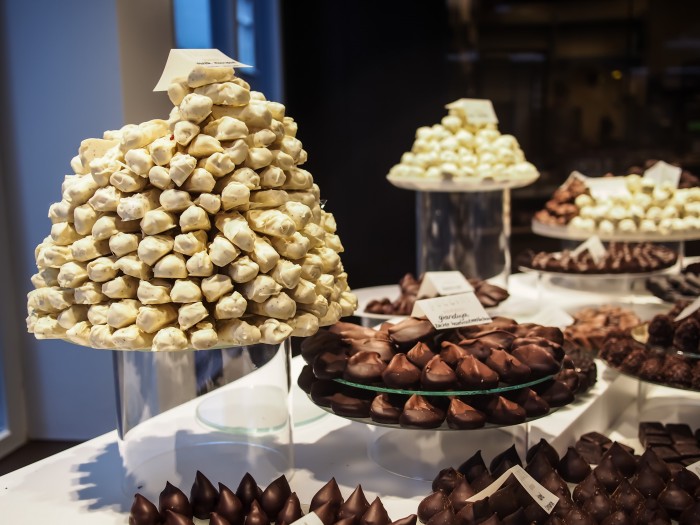 With that, we ended our afternoon of pigging out on our Amsterdam foodie tour. On value alone, you definitely get your monies worth in great food. Come hungry. Leave satisfied. Hungry Birds offers a few different options when it comes to an Amsterdam foodie tour – a breakfast tour, a lunch tour, a bike tour (which I would have loved to do!) and a Saturday market tour (which is what we did and it was great!) If you are looking for some insight on Amsterdam’s surprisingly diverse food scene from a couple of women who are truly passionate about the subject, look no further. Hungry Birds is a great way to taste Amsterdam and its historic past. Zosia was professional yet fun and her words felt unscripted, heartfelt, and genuine. She truly loves Amsterdam’s food.

And you will too. 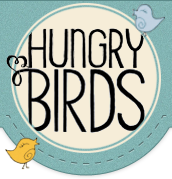 Although I was provided a tasty Amsterdam foodie tour from Hungry Birds
at a reduced press rate, the experience, opinions, taste buds, and words are my own.