Out of the blue, my less than two-year-old MacBook Pro died. Despite babying it throughout ownership, it decided it had enough and would no longer power on. For anyone, being without a laptop can be an uncomfortable situation. For someone that relies on a computer every day, it is downright crippling.

Although completely lost and frustrated with the situation, this was the best thing that could’ve happened. Here’s why.

Why I Bought a MacBook Pro

I’ve enjoyed the MacBook Air line for close to 10 years. Its lightweight and portable power made it the perfect travel companion. That said, there came a time when the MacBook Air didn’t make it the industry leader it once was. As such, when I needed to replace my beloved MacBook Air a few years ago, I considered an upgrade to a MacBook Pro. The specs were significantly better for a menial price increase. On top of that, I was getting more into Adobe Lightroom and the Pro’s specs were a better bet than the Air at the time.

At first, I came to enjoy the MacBook Pro for its power bump and bright screen. Still, it didn’t take long for me to miss my MacBook Air. I found the Pro bulky and missed the ergo design of the Air’s wedge shape. It did come with the Touch Bar but I found that, like many others, gimmicky at best. Worst of all, the fan and heat that this thing kicked off were unlike any other device I’ve ever owned.

So, when my MacBook Pro died, I had mixed feelings.

In Comes the MacBook Air M1

In between my MacBook Pro purchase and failure, Apple released its MacBook Air with the M1 chip. This new silicon was reportedly a game changer for Apple. On top of pushing its performance past the older MacBook Pro, it also had the added benefit of being completely fanless.

I was struggling to get Apple to confirm when, if at all, my MacBook Pro would be repaired. With timelines spanning from weeks to months, I pulled the trigger on a new MacBook Air M1. I was able to find a refurbished one with upgraded RAM and SSD drive for less than $1,500 CAD.

I was and continue to be completely blown away by the MacBook Air M1. The performance and battery life is not an issue a year in and it handles Lightroom arguably better than my old Pro. On top of that, it doesn’t rev up any fans.

It’s also smaller, lighter, and has the ergo-friendly shape I missed. Best of all, it’s also cheaper. For me, it was surprisingly free. It also resulted in a free business class seat between Vancouver and Toronto.

As mentioned, I did attempt to get my MacBook Pro repaired. This resulted in me waiting on parts for two months only being told that it required more parts and, for some odd reason, a new screen. As such, the price of the repair ballooned past the price of a brand-new MacBook Pro.

Durring this whole process, I visited the Apple store a couple of times to check in. Each time I was given different timelines and reasons on what the issue is. This included one tech who even suggested the device didn’t power up because of a known issue in the MacBook Pro line and hinted at why they were going back to the Mag Safe connectors.

I raised these concerns with Apple’s online support and to my pleasant surprise, they actually refunded my original purchase! This took some back and forth as they were going to cover the repair but I let them know that I had to buy another device since I couldn’t get any timelines. Well done Apple for stepping up and owning up to your faults.

The last happy piece to my MacBook Pro dying is the Aeroplan points I earned from buying the MacBook Air replacement. Paired with a great Black Friday promotion through the Aeroplan eStore, the ~$1,500 purchase netted me a whopping 20,500 points! I later turned this into a business class flight on Air Canada’s signature 787-9 by using my eUpgrade strategy.

Although this is a unique situation, I am sharing this story for two reasons.

First, the MacBook Air M1 is an amazing laptop (and it’s currently on sale!) I highly recommend it for travel and blogging. It’s lightweight, fast, and handles photo editing like a pro. Last, buying a new MacBook (or a mirage of other big purchases) can net you enough points to help you fly better or further. I’m sharing this story now as Aeroplan’s Black Friday sale for this year is just around the corner. Amazon and Apple usually have great promos on Apple products – they usually exclude the latest products so the MacBook Air M1 continues to be a great buy! Stay tuned as I will share my favourite Aeroplan Black Friday finds and buys soon!

What say you?
Has your MacBook Pro Died?

Are you looking for more luxury travel or reviews on travel gear? 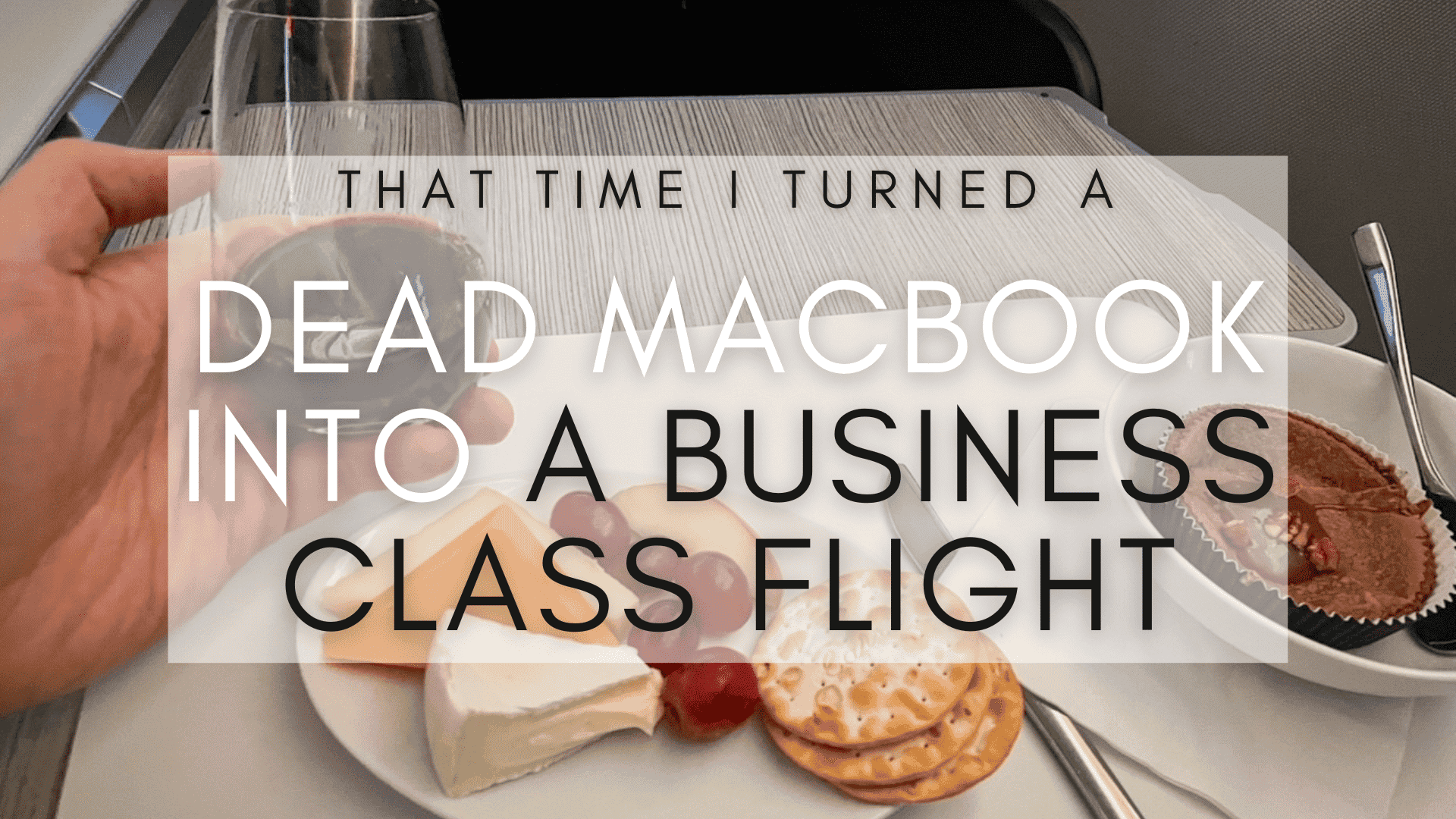 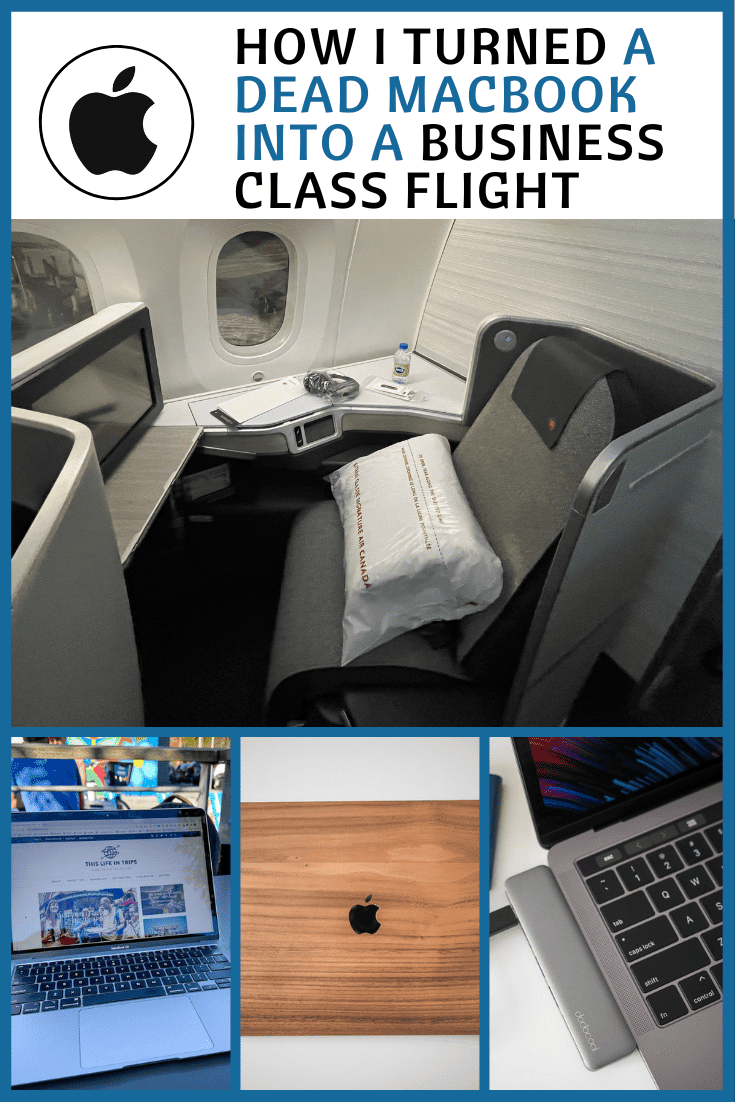