It’s pretty easy to put Edmonton down. It’s cold in the winter and covered in mosquitoes in the summer. The seasons in between can be a sad mix of grey and brown. This, of course, is nothing new. DEdmonton, as it has so unfortunately been labelled in the media, has been repeatedly dragged through the brown snow for years. Most notably, for me at least, was when a sad excuse of a journalist smeared Edmonton as being unfit to host a Woman’s World Cup of Soccer game.

The article was really about the authors home of Toronto being overlooked, but the cuts were deep. As hurtful as those words were, it’s tough to argue DEdmonton’s place as a “world-class city.” It’s biggest exports are Wayne Gretzky, Tommy Chong, and Boston Pizza – the restaurant that uses the same 10 ingredients to create 4000 dishes. Even its founder now lives in Vancouver.

Yes, it’s easy to put Edmonton down. Lifting it up is the real challenge.

Much like I felt the need to be a champion against Australia’s capital city’s reputation as being CanBoring, I feel the need to stick up for Edmonton and sift through the fake news. With that in mind, I traveled to Edmonton to search for life.

I’m writing this from a downtown Starbucks. According to former Mayor Stephen Mandel, this in itself is a symbol of how far this quiet city has come. Near the end of his tenure as mayor, Mandel commented on how improved the sad downtown core was by noting the amount of Starbucks that had opened up. For years the lack of entertainment options, restaurants, and accommodations in downtown Edmonton plagued the city and kicked off the term DEdmonton. Come 5:30, the city was a ghost town.

But not anymore. Now there are now 10 Starbucks 😉

Although it was a weak way to rate your city, the point was businesses were moving in. In reality, no amount of caramel drenched macchiatos can turn this city around. Sitting at the Starbucks window I watched pickup truck after pickup truck caked in slush pass by. The roads and sidewalks are fractured from the extreme weather conditions and the grey overcast day fits seamlessly with the brown and grey towers from the 70’s. The very same sad skyline has stayed the same for decades, until now.

Wait…what? Edmonton, you put the wheels in motion and invested bigly in your downtown core only to call it the Ice District? Who lost the bet on that one? The same person that changed Klondike Days to Capital eX  I imagine.

Horrible name aside, DEdmonton’s new downtown core got a serious shot in the arm. 25 acres of prime downtown land, the Ice District (ugh) is the largest entertainment district in Canada. This was an ambitious and lofty goal, but a much-needed one for Edmonton’s reputation and loyal hockey fans.

Off to a Rocky Start

Coming from Vancouver I get that Edmonton is not as shiny or as refined. This may sound pretentious but like it or not, it’s the truth. As I drove into the city in my rented Jeep Wrangler (because Alberta?) I decided to stop for lunch at my favorite Cajun spot– Dadeo. After fighting with the new yet painfully slow parking meters, I pulled up to the door to find that Dadeo was closed. It was noon on a Wednesday. Walking down Whyte Ave, perhaps the city’s now-former entertainment district, I found much of the same. If restaurants weren’t closed for the day, they were closed permanently. There was a surprising amount of “for lease” signs in the windows I passed by. Was it a sign of Alberta’s downturn in the oil industry or the fact that the downtown core was siphoning business?

I was eager to find out.

After checking into the Matrix Hotel, a well-groomed business hotel in downtown Edmonton, I made my way to check out the Ice District and its shining beacon of hope, Rogers Place. The ability to walk from a nice hotel to a major sporting arena alone says how far the city has come. Gone are the days of driving in frigid weather to the outskirts of town to see a hockey game.

Then there was stumbling on Edmonton’s Neon Sign Museum. This outdoor (and free) collection of vintage signs brought back memories of visiting the Neon Boneyard in Las Vegas. A very cool surprise and nice outdoor art piece that is both hip and historic. It’s also positioned well and provides an interesting walk up to the massive arena looming in the distance.

It was an Oilers game day and as such, people were on the streets and in the downtown bars. These very bars would have been empty not too long ago. Instead, buskers played, Oilers fans high-fived, and I took it all in.

There was nothing dead about this city or this area.

Confession time. I am a huge Oilers fan. Seeing a game at the new rink was high on my travel to-do list this year. Thankfully, it did not disappoint. This much-disputed project, one that took the team subtly threatening to relocate to Seattle to finally move ahead, has delivered in several ways. As noted, it is transforming the city’s downtown core and allowing the surrounding businesses to stay open past “quitting time.” It has also provided fans a long-awaited place to enjoy hockey in the modern age. 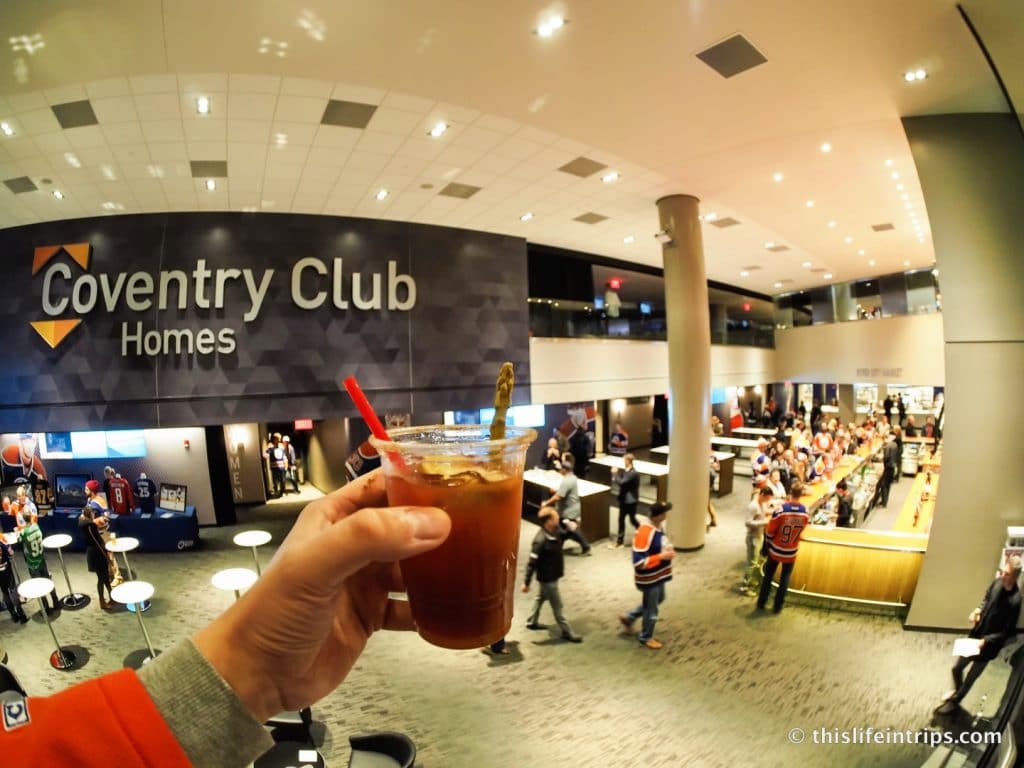 And seriously, what a rink. A lot of thought went into providing fans with the best experience possible. There are several products that include theater-style box seats to a “Sky Lounge” that turns into a post-game nightclub. Yes, watching a good-old-hockey-game in Edmonton will never be the same again. The simple fact that you can now get amazing food at an Oilers game sold me on the place. Everything else is a welcome bonus…well maybe not the overpriced foamy beer…

Truthfully, the overpriced beer is a good sign. Fans are still filling seats in Edmonton, more so now than ever with the rise of the second coming of Gretzky, Conor McDavid. Meanwhile in Vancouver, “fans” were enticed to the Canucks home opener with free beer.

Oh, how times have changed.

Yes when it comes to hockey fans, it’s hard to label this town as dEdmonton. That said, if hockey was the only factor to Edmonton’s success, we would not be having this conversation.

After the game, I watched as happy Oiler fans celebrate their team’s victory by flooding the streets. Car horns honked. High-fives flew. Although this was nothing new, the option to continue celebrating near the stadium sure is. Many filled the brand new casino conveniently attached to the rink. Others hit nearby pubs and restaurants. I found myself across the street at the Mercer Tavern, a beautifully appointed pub in one of Edmonton’s oldest buildings.

Innovate Before it’s too Late

As the buzz from a cocktail of stadium beer and fast paced hockey wore off I thought about the pubs and bars on Whyte ave. How do they fare now that there are options in this city? Ironically, this thought was interrupted when a DJ started pumping loud music – ones suited for an EMC festival rather than the building and pub I was enjoying. DEdmonton’s reputation and lack of options historically forced businesses to be something they are not. You know, instead of doing one thing well, ie. be a cool pub, they try to do many things mediocrely, ie. be a cool pub/Edmonton’s hottest nightclub.

Clearly, it’s time to catch up to the change. This goes well beyond focusing on doing one thing well.

Edmonton is on its way to shedding its unfortunate moniker but unless they innovate and find ways to bring in business beyond the oil patch, it may be too little too late. Years of prosperity has done well for the province and its people. The inability to adapt to change, good and bad, will have serious repercussions. This could take the term “dEdmonton” from its representation of being boring to the most literal sense where the wells run dry, and businesses die off.

10 years from now, how many Starbucks will Edmonton have? Time and action will tell.

On the bright side, at least for this Oilers fan, Edmonton could once again be swimming in Stanley Cups.

What say you?
Thoughts on Deadmonton and its resurgence?
Let’s hear it!