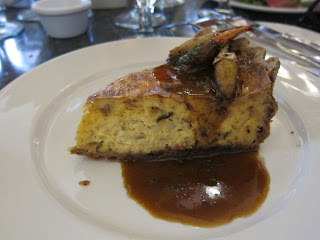 It´s amazing what a difference 17 hours can make. Giant hurricanes in hand, we strolled a much more alive and fun Bourbon street than the night before. People of all walks (not just bro´s) were out enjoying the early evening heat, music, street performers, and open liquor laws (or lack of). We were truly having a great time. NOLA. The day started off with a breakfast that consisted of gumbo and crab cheesecake. Erin vowed to eat crayfish with every meal and was living up to that guarantee. After eats we joined a mostly senior looking group for a bus tour of the city. This turned out to be well worth while as we saw a lot of the city in a short period. Notables were the ins and outs of the french quarter and the areas most affected by hurricane Katrina. Also interesting was the areas being rebuilt by Brad Pitt, Harry Connick Junior, and Canada´s own Mike Holmes.

Post tour we grabbed drinks and strolled the market and the French quarter. The buildings there are quite something. It was hard to imagine the amount of people that are on the balconies and galleries during Mardi Grais. Although Jazz Fest is second on the list for tourists in NOLA, it is a distant second. We stopped for a pint or 3 at the oldest bar in the city (which has no electricity!) before collecting beads on Bourbon street then heading to Frenchman street for an amazing meal. Deep fried pickle chips and corn bread was my favorite of the evening. Full up on comfort food we headed out to a recommended (thank you Donna) Jazz club called the Spotted Cat. Amazing. Even more amazing was the bar and Jazz band singing me happy birthday after 12:00 pm. Check that off the list.

Ear plugs helped us sleep in the following morning which was good as a 10 hour flight was in store for us. We had a few hours of strolling the French Quarter before heading to the airport. Just enough time to eat a muffalatio (?) (a pizza sized sandwich with olive spread) and Po´Boys. America.

NOLA, you will be missed. South America next.