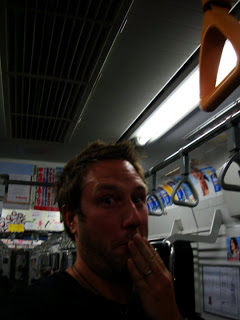 When we last left off a very drunk and some what obnoxious Shaun was smiling and waiving goodbye to Justin, Allison, and Erin as they sped off on the last train of the night. Still laughing out loud I suddenly found myself in a very dark, very quiet outdoor metro stop. Although I was stumbling drunk, had no money, and no idea where I was I felt safe and in no danger at all. This is how safe and peaceful Japan felt to us. This feeling changed when I heard a twig snap in some nearby bushes. Ninjas. I forgot about ninjas. I sat on a bench to collect my thoughts…all three of them. As I sat there I actually said out loud to myself, “How are you going to get out of this one Shaun?” Thought number one was to wait it out. This was Tokyo, people surely go to work at 5:00 AM. I could nap on the bench until the trains start up again. Thought number two was about how good dinner was. I snapped out of that and moved on to thought number 3, figure out a way to use my charm and good looks for good and not evil. This thought was interrupted when a metro employee approached. He told me as polite as he could in broken English to get out. He then walked me out on the street. “Such nice people!” I thought to myself. 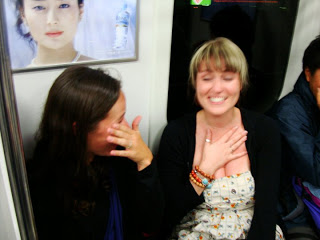 When we emerged a taxi screeched to a halt some 25 meters away. Out popped Jallison and Erin. They had gotten off the train one stop down the line, ran (I must stress RAN) out of the station, flagged a cab and sped to my rescue. “Shaun!” they shouted in relief as I was escorted out of the station. Now most people would be lucky to have friends like these. This briefly crossed my mind however most people are not drunk assholes. So there we stood, 25 meters apart in a 10 second standoff while I processed these thoughts. Most people would have headed towards their loved ones in a slow motion fashion much like Bo Derrick in the movie “10” Well I’m certainly no Bo Derrick. So what did I do? I ran…in the opposite direction. For some reason when I am in that simple minded state I find it hilarious to run away. Sober I never run. To be fair I don’t even like to walk fast. I’m not sure why but when I drink to excess I become Usain Bolt. So as you can imagine, the three heroes stood in shock and confusion as I ran off and out of sight. I’m sure I could be heard giggling into the dark. 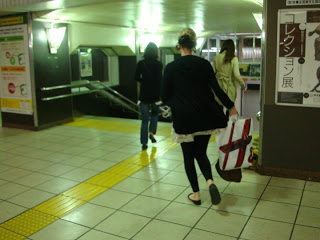 I didn’t go too far. I turned a corner, circled back around and flanked them from behind. At that point I stopped. Hugs and relief followed. We hailed a cab and headed for our hostel. In the cab Justin showed me video he had taken of the mishaps. First it was a clip of Erin and Allision laughing on the subway car to the point of tears. Such good friends indeed. Next was the three of them madly running through the following station while Justin yelled “Im sorry buddy! Your my best friend! Please don’t die.” Next was a clip of the standoff and me running away. All of this solidified how funny it was so when we stopped in our area of town I ran again. On that video clip you can hear a much less concerned Erin say as I disappear, “So…burger anyone?” A final dash occurred later on after we had sat down at a Denny’s for some late night eats. I quickly browsed the menu and realized it was not the all day breakfast Denny’s that is a drunken staple in North America. With that I bolted. I knocked over a high chair to throw off anyone in pursuit. The poor people working there were so confused. I left Jallision and Erin to apologize as they came after me. “It’s people like him that give American’s a bad name.” said Justin as they left. This was an ongoing joke for us as someone had actually said that about Justin after he had done something to warrant that kind of response.

I was found at a nearby McDonald’s eating my second cheeseburger of the night. After some grease we all headed home…peacefully.

Some kind of hurt to follow in the morning.