If the first season of “White Lotus” taught me anything, it’s to tread lightly with hotel management.

When visiting somewhere new, the experience you have at your accommodations can have a lasting effect. If your room or service doesn’t live up to expectations, your impression of that destination can be tarnished as a whole. Years ago, I stayed at a shit hole of a hostel in Rome and have had reservations on returning to the city because of it.

Is that fair? No, not at all. But it is human nature.

Ever since that first backpacking trip across Europe I have put an emphasis on researching accommodations and booking places that I know I will enjoy in advance. Why go all tat way only to be upset about where you chose to stay? Still, there are times where your hotel doesn’t live up to what you paid for. Depending on how you handle those situations, things can get messy.

Much Needed Down Time

This brings me to my visit to Antalya, the picturesque seaside town on Turkey’s southern coast. This was to be a bit of a relaxation stop on my busy first trip post-pandemic restrictions. I wanted to take it slow after touring a ton in Georgia and Azerbaijan. As such, I searched for a hotel where I could relax, and enjoy the view of the Mediterranean all while getting some work done.

I initially narrowed the search down to two properties, a cute boutique hotel in the old city and a chain hotel just outside the city walls. Both properties were highly rated although the boutique hotel had some concerning reviews about the staff. If you know me, you know I agonize way too long over decisions like this. I debated splitting my time between the two properties but ultimately chose the boutique hotel. Besides being in the heart of the old town, I like to support small and independent hotels when I travel.

With that, I booked for five nights (something I rarely do) and paid extra for a room with a balcony and harbour views.

After an awesome but exhausting 10 days touring the Caucasus region, I arrived in Antalya ready for some rest. It was early and I was surprised to find that the check-in attendant offered a choice between two different rooms. He took me to the first which was smaller than what I saw online and its balcony did not offer much of a view as it was obstructed. He then took me to the next room which was double in size but had no balcony and twin beds.

Confused, I asked about a room with views of the old town and harbour. The clerk looked equally confused. He finally said that they had no rooms with oceanfront views. This was odd as they were two other rooms on the same floor as the first room he showed me facing the harbour and sea.

Now, I need to clarify that I fully understand that I was in a different country where (outside of hello, please, and thank you) I speak zero of the language. It was highly possible that communication was an issue however something felt…off.

I again questioned this while struggling to pull up my booking on my phone. I let him know that I paid extra for a specific room and showed him a picture. Again, he looked very confused. Finally, he said that the hotel was completely booked and these were the only two rooms available. This seemed feasible given it was a Saturday however it was early in the day and likely not everyone had checked in yet. Also, I paid extra for a specific room.

Exhausted from the trip, I accepted the small room with the balcony and settled in for my lengthy stay.

If you haven’t seen it, this HBO TV show follows the stories of several different groups of people vacationing at a high-end resort. One character in particular won’t let go of the fact that he did not get the room he booked and, without giving too much away, his persistnace ultimately leads to a series of catastrophic events.

This really resonated with me and actually came up while I was in Mexico earlier on this trip. We had an issue with a room we booked at a resort and struggled to get it rectified. We were tired and this probably played into our frustrations. I never want anyone to be a “Karen” or a “Chad” but I also think people should get what they pay for.

With this show in mind, I decided to make the most of my relaxing stay in Antalya. The room, however, had other plans.

What Happens When Things Get Worse?

I made my way to a nearby shop and stocked up on the essentials (water, beer, coffee, Fanta) and settled into my room. My goal was to write some articles however when I got back to my room I couldn’t get past the smell. A dry or absent p-trap in old building plumbing is not uncommon. It’s something to expect in European hotels, especially those in older areas. This, however, was ripe.

The small room didn’t help dissipate the smell. I tried to close the bathroom door however it would not latch. Again, old buildings.

I ran some water in the shower in hopes it would help and made my way to the balcony to work from there. This didn’t last long as the balcony was in full sun. With that, I packed up and wandered to one of the many cafés terraces. This would be my routine for the next few days.

Returning to my room each day brought an audible “this fu$cking room“ as I caught a whiff of the smell. This was the baseline for my bad experience.

Next came issues with the power. I left my laptop charging and came back to find it would not turn on. Turned out to be bad wiring on one of the outlets and my laptop, after a stressful few hours, came back on. Again, old buildings and I wasn’t going to fault that but the situation was starting to compound.

On my second day, I got a friendly email from the hotel staff through my booking service hoping all is well with my stay. I replied thanking them for the email and asked if a room with a view came available I would like to change as I was still here for four nights. The city completely cleared out on Monday so I figured this shouldn’t be an issue. The next day I got a reply simply saying “Thank you! Enjoy your stay.“

Again, I will chalk this up to the language barrier and I wasn’t going to push it any further. I only brought it up because of the courtesy email.

Finally, on my third night, I had no hot water. I continued to equate this to being in an old building but the overall experience with disappointing and getting me down. I kept the “Karen” at bay but I definitely wanted off this ride and debated switching hotels altogether.

Seeing What Exactly What You Expected

On the fourth day as I was heading out, the cleaners had the door to the room next to me open. I said hello and asked if I could look at the view. They smiled so I took that as a yes. I stepped in and immediately found a room double in size with a large balcony overlooking the harbour. It was the room I thought I initially booked. I was so beside myself that I literally walked into the glass door when trying to step outside. It was loud and it was hard. Embarrassed, I managed to muster an “it’s so clean!“ before opening the door and stepping outside.

Still not wanting to be difficult, I let this go as I only had two more nights and made my way out to do some laundry. On my way back I gave myself a pep talk about asking to change rooms. To my surprise, the clerk (the same one that checked me in) said yes and to come back in 10-minutes. Perfect!

This made me very happy. I literally skipped to my room to pack up. I even said “so long shit stench room!” as I closed the door behind me.

Bags packed, I made my way back to the front desk. I returned to the clerk expecting to get my new room key but he looked at me like it was the first time we met. I explained that he said to come back in 10 minutes to change rooms. He gave me the blankest stare I’ve ever seen.

The next 10 minutes were…weird. He was in the middle of checking someone else in so I took a step back and let him deal with that. He kept getting up and going outside and back to his seat, ignoring me each time. I finally asked again and I got a mix of answers. It again started with “there are no rooms” and went to “why do you want a different room” and finally stating that “they are all the same rooms.” I stood there smiling and asked about the room next to my current one. Another few minutes of getting up, ignoring me, and sitting back down followed. I think because I didn’t leave he finally made another room key.

I did feel bad for the guy, especially if language was an issue but I’m pretty sure it was because I was a solo traveller. To complicate things, a Korean lady showed up randomly asking about a room because the Internet was too slow at her current hotel. He said for her to book online however she could not get online and wanted to connect to the hotel’s Internet. He politely told her that he will help her and then looked at me and said follow me. She thought that meant for her to follow him and away the three of us went to look at this new room. Again, this was weird.

I assumed he was going to show me another shitty room but it turned out to be the room where I freshly planted my face into the balcony window. He opened the door and I didn’t even step in. I just said yes, please. 15 minutes later and I am writing this from my harbour view balcony (with shade) and cold Efes beer in hand.

The Moral of the Story?

That said, if you aren’t getting what you paid for, question it politely and with some understanding. My stay in the smaller, stinky, room put me in a dark place. It’s silly to say that but it really did affect me. Again, I’m human.

Reflecting on the situation, finally getting the room probably avoided me from voicing my opinion online through a review. Hotels certainly don’t want that. More importantly, nobody wants to go home in a body bag 😉

Season two of the White Lotus starts October 30th. You can catch up by streaming the first season on Amazon.

What say you?
Have you had a similar “White Lotus” situation? How did you handle it?
Let’s hear it! 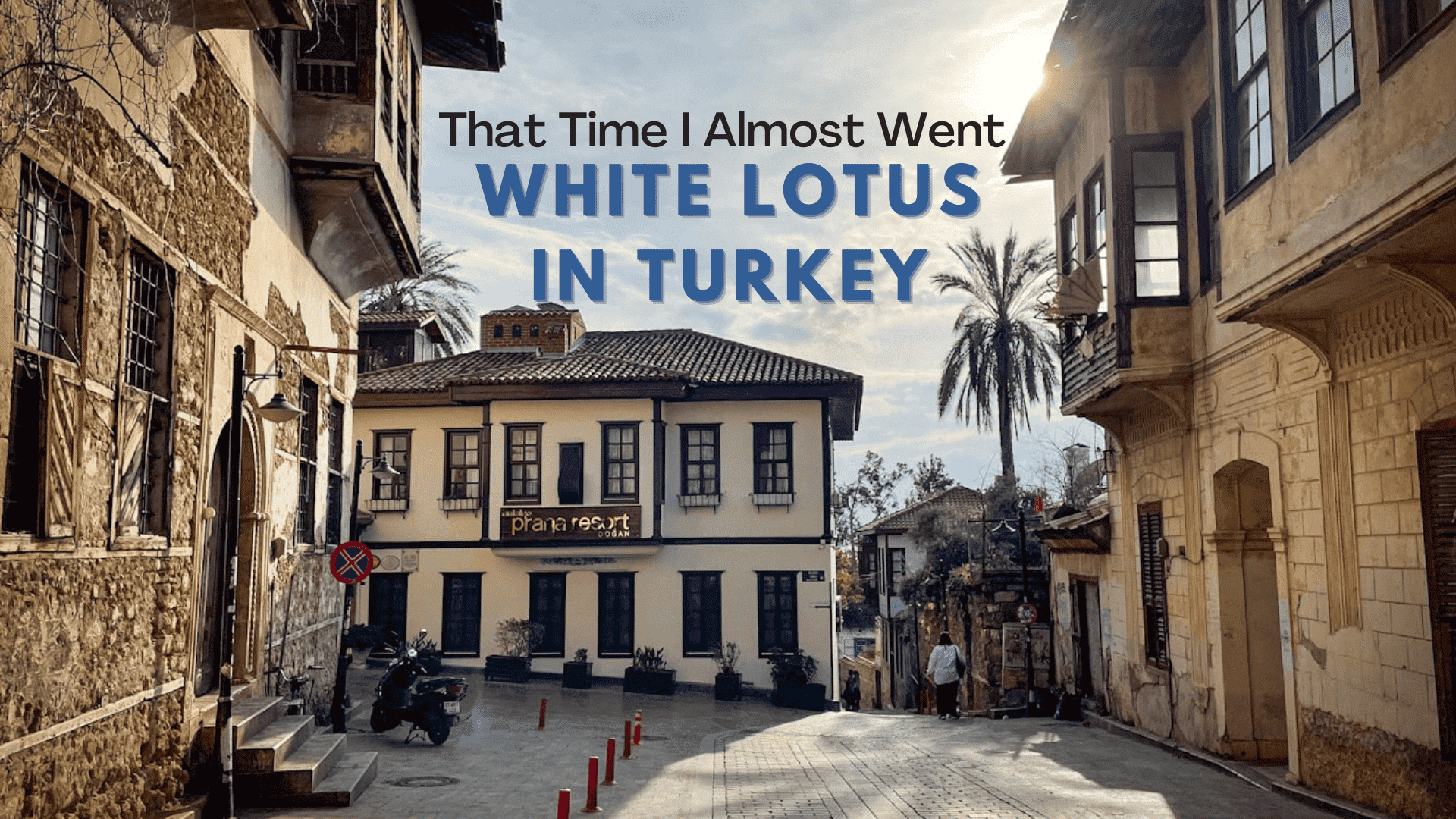 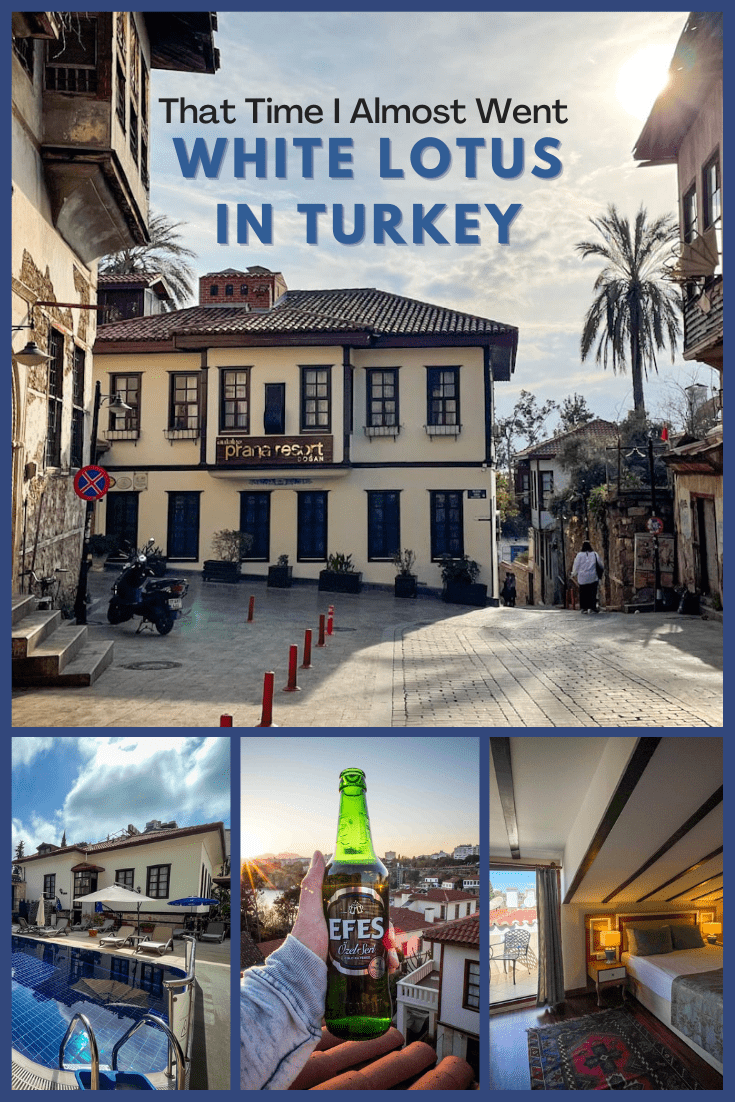