I want to ride an elephant. Is that so wrong?

For years I have watched my friends and fellow travelers post pictures of themselves having the time of their lives on top of these giants and for years I have said that I want to do that too.  So when we finally booked a trip to Thailand I was pumped to cross riding an elephant off my travel bucket list.  Yep, years of elephant riding jealousy were about to be erased. Visions of Dumbo and me frolicking hand-in-hand (hoof?) through a shallow stream danced in my head while “happy together” by the Turtles accompanied us.

Then Erin grew a conscience…
You see she had heard about Elephant Nature Park, a sanctuary for abused and abandoned elephants. A friend of hers had recently gone there to volunteer and raved about the experience. I didn’t pay much attention to the details beyond the fact that they have a shit ton of elephants. I was sold and went back to my daydream.

It wasn’t until we were on the bus heading to the Elephant Nature Park did I realize my day dream was just that.

Shaun – Oh man, I am going to ride so many elephants!
Erin – Ummm… You know you can’t actually ride the elephants right?
Shaun – What.
Erin – It’s an orphanage for elephants.
Shaun – What?

It was like someone bumped the record player and “happy together” came to a screeching stop. It was a rude awakening. Turns out the Elephant Nature Park is a rescue shelter for elephants that have been treated cruelly or abandoned when no longer needed as workers in the logging and tourism industry. It also turns out that those happy friends riding those elephants in those pictures could have been doing harm. During the introduction and orientation we were tour told horrifying stories of animal cruelty in the forests and on the streets. This included stabbing and blinding elephants when they would not listen and broken backs and hips from overloading and overworking them. This included from paying tourists. Fak.

A Day Spent Not Riding Elephants

We continued on to the feeding station. I stomped my feet like a two-year-old who didn’t get his way. Things did turn around when we saw these gentle beasts up close. We were allowed to feed them which was hilarious. I will never forget the wet chomping sound as the cantaloupes exploded in their mouths. 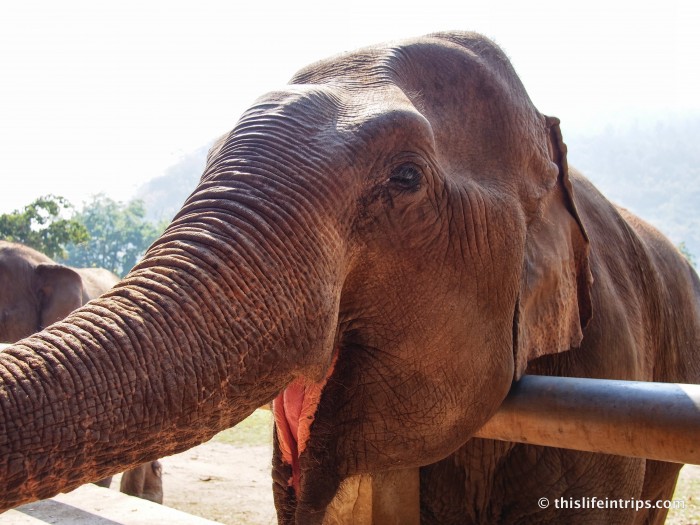 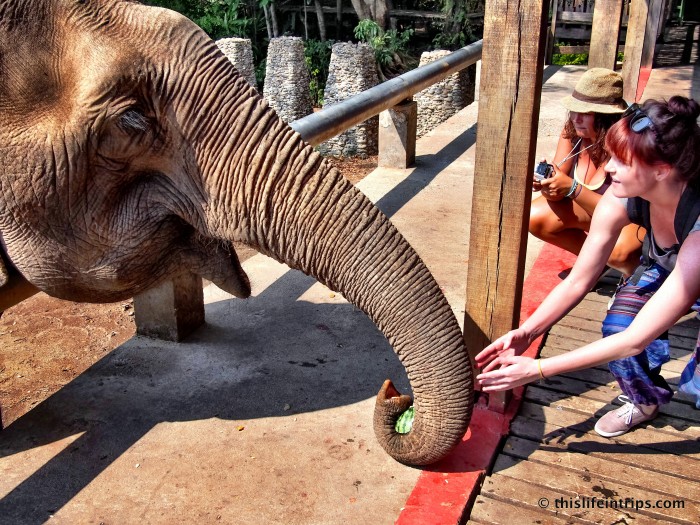 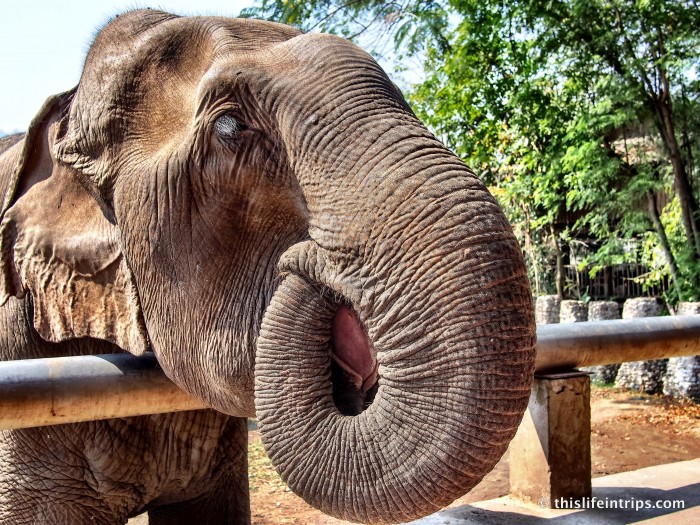 Our day continued with a tour of the facility and stories behind the now famous residents there. At the Elephant Nature Park the animals are free to roam the 250 acres property, although they seem to be in a routine rotating around the groups of tourists that arrive. Eat. Bath. Snack. Chase the baby elephant. Eat some more. Repeat. 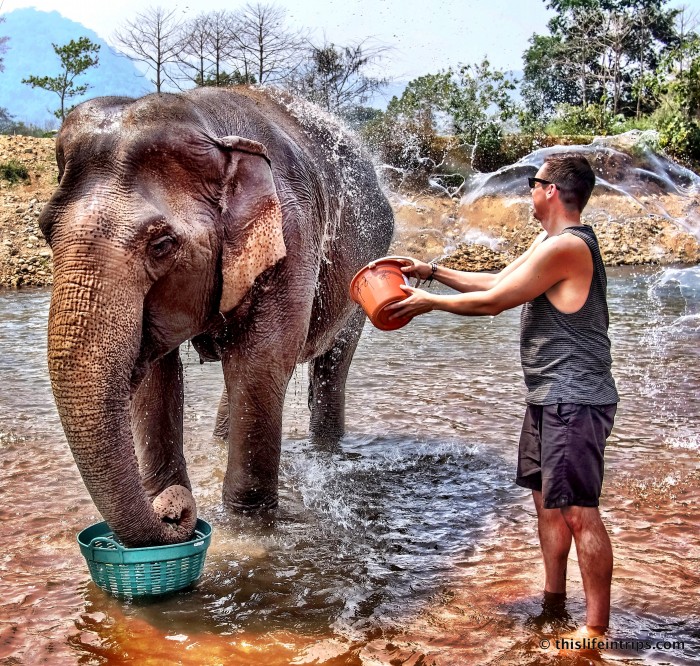 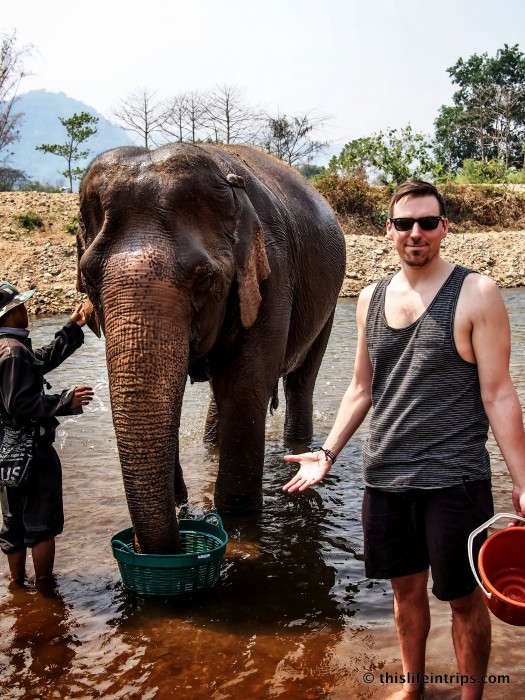 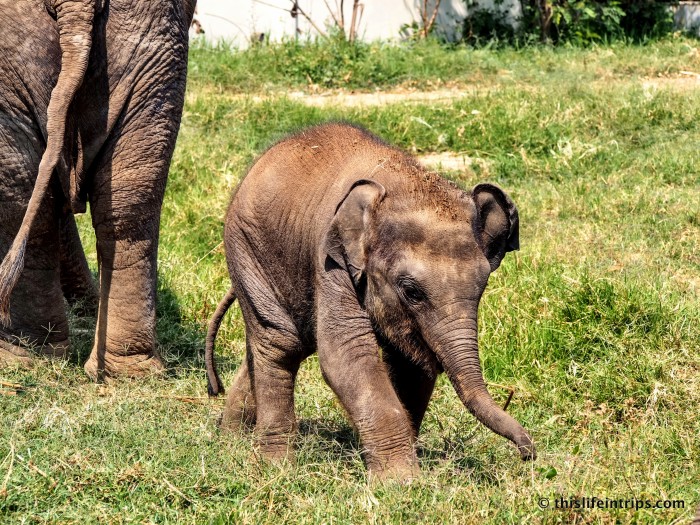 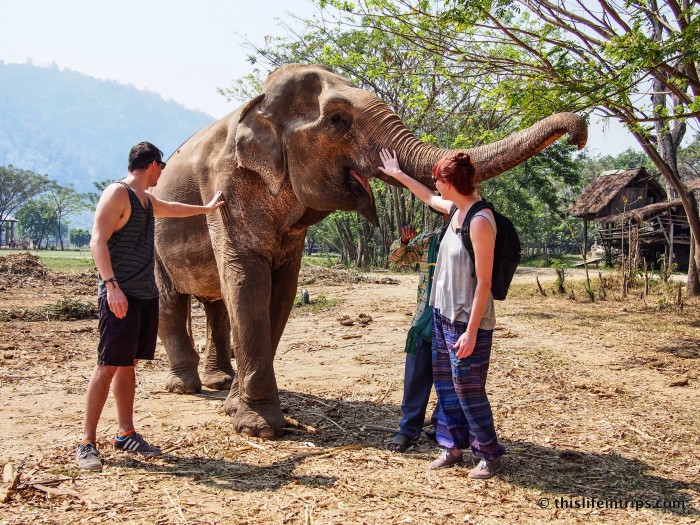 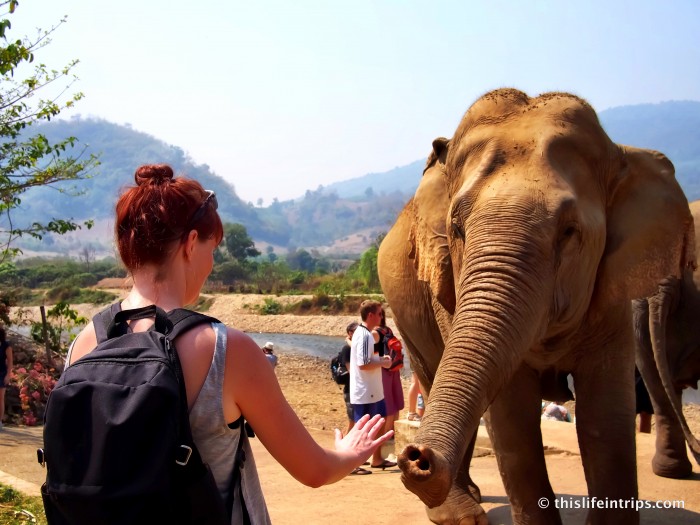 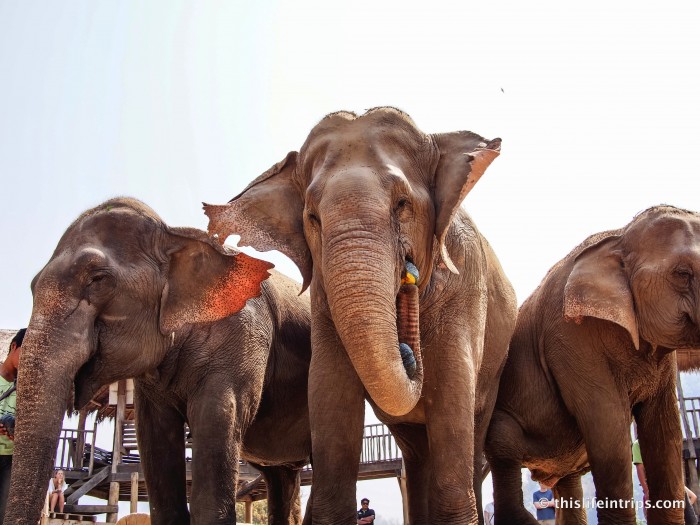 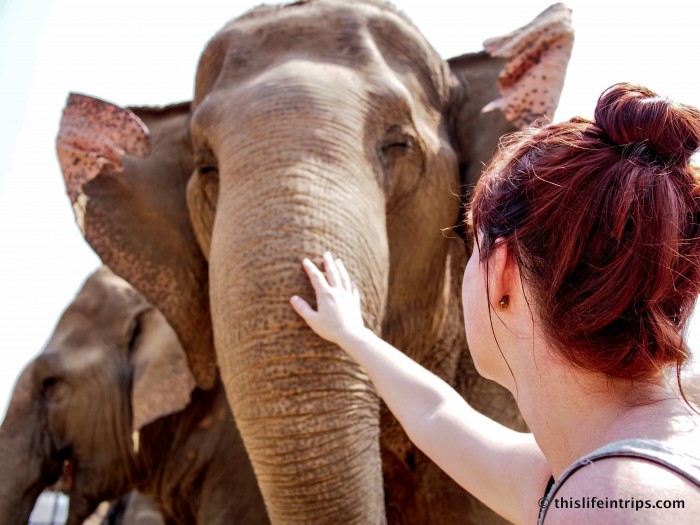 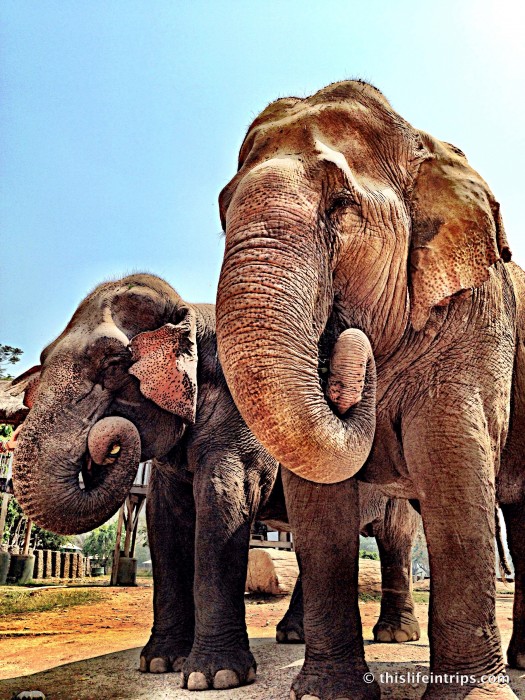 On top of not riding elephants at the Elephant Nature Park you can sign up and stay on site and hang out with the animals all day/week/month if you want. This sounds like more fun than it probably  is.  This was clear when we passed by one of the large sheds where two Eco-tourists  were shoveling elephant dung in the hot and humid Thai sun. One girl wasn’t impressed as she cursed and complained to her boyfriend. Clearly she had bitten off more than she could shovel – to which her boyfriend replied “this was your idea!” 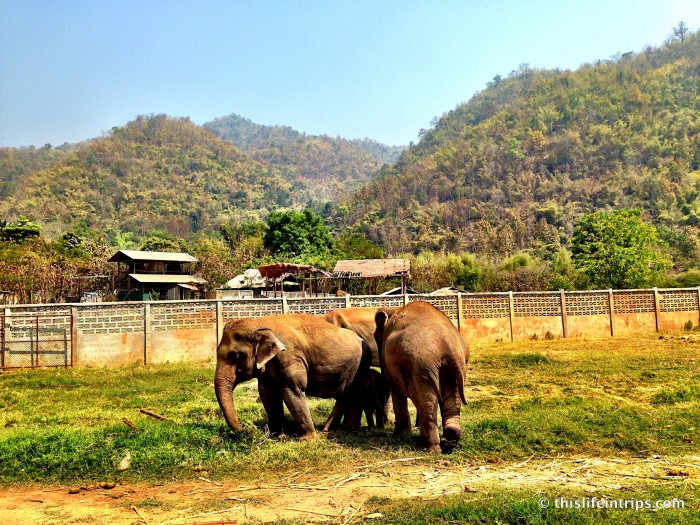 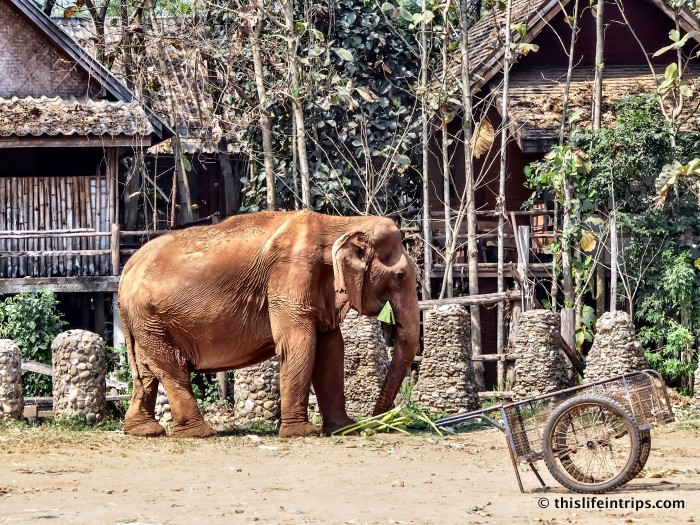 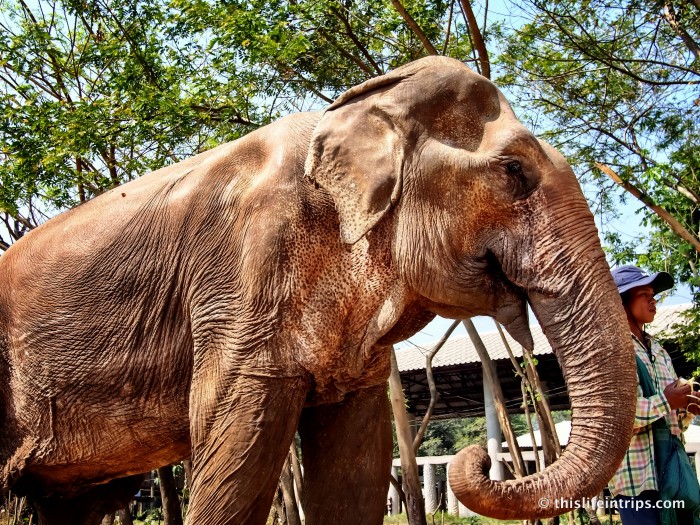 At the end of the day I had come around and was glad we chose the Elephant Nature Park over the other ones that target tourists money. They are committed to treating the animals with love and respect and are not necessarily after tourist money.  Still, I couldn’t help but feel a bit skeptical about how the Elephant Nature Park portrays the use of elephants in Thailand – which has been done for centuries. It is to them what horses are to us and without the use of them, Thailand would not have the temples and roads of yesterday and tourist dollars of today. Of course how they break these animals into being submissive is/was horrible and cruel however they have done it this way for sometime. I’m not saying it is right but it is part of the culture. It’s easy to be an outsider pointing and saying it’s wrong but if you lived there and needed the work done maybe you would think otherwise.  Maybe there are less cruel ways, maybe the animals could be less exploited. I don’t know. Maybe I am bitter because I didn’t ride an elephant. All I know is I didn’t know how I felt about it while visiting the Elephant Nature Park and don’t know how I feel about it now. 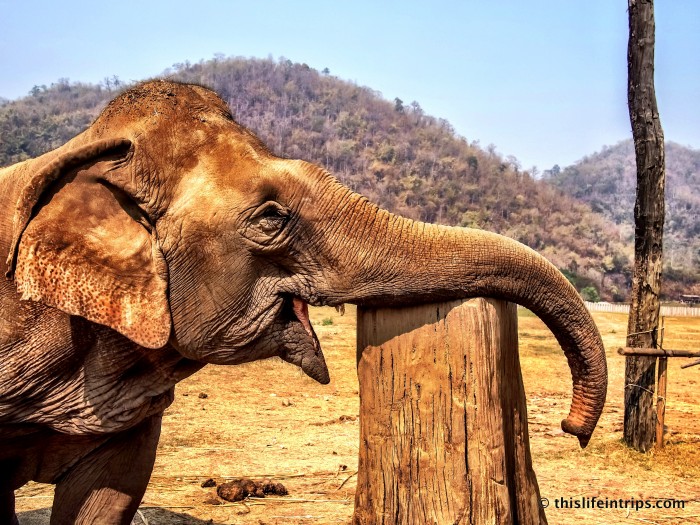 What I do know is the Elephant Nature Park  treats its residents incredibly well, especially its oldest ones that need to take a load off now and them. So I didn’t get to ride an elephant. I’m OK with that. I did get to frolic in a shallow stream with an elephant and will never forget that experience.

I guess I got my  “Happy Together” moment after all.