With the NHL finally confirming there will be a season, I thought it would be good to look back on my time going to a Golden Knights hockey game in Las Vegas. Read on for my experience and why I think it is well worth the high ticket price, hockey fan or not.

Covid Disclaimer: I went to a Golden Knights hockey game in Las Vegas in March 2020, just before the pandemic temporarily shut down the league. Please follow local guidelines and be sure to check the official Golden Knights website for the latest policies for attending a game. Wear a mask, wash your hands, stay safe!

Why Should Consider Going to a Hockey Game in Las Vegas?

When Las Vegas was awarded an NHL team in 2016, I thought it was laughable. With decades of failures under their belt, I thought the case of the Arizona Coyotes was all the proof you need to say hockey in the desert does not work.

But, as I thought about it more, hockey in Las Vegas would be no different than a Cirque du Soleil show or a resident performer filling seats at the end of their career. It would, at the very least, attract tons of visiting team fans. What better way for a Canadian bachelor party or fun escape from the November cold?

This brought up the question of having a local fanbase. The answer to this came quickly. During the Vegas Golden Knights inaugural season, they came within two games of hoisting the Stanley Cup. Not only did they fill seats, but the locals were into it. This definitely made me want to check out a hockey game in Las Vegas. With my love/hate Edmonton Oilers in town, I did just that.

Here are my takeaways and tips on going to a Golden Knights hockey game in Sin City.

Compare prices on flights to Las Vegas with Skyscanner

Where do the Vegas Golden Knights Play?

Although there is much to love about this modern arena, the location is probably its best feature. It’s conveniently tucked away behind the New York, New York and MGM Grand hotels. It’s a short walk from the strip, making it incredibly easy to get to.

Since you are most likely going to a hockey game in Las Vegas to cheer on your home team, you want to be on the south side where the visiting team shoots twice.

That said, there is not a bad seat in the house. I took a walk around the whole stadium at the 200 level and the views are great.

READ MORE: Leaving Las Vegas – 7 Great Things To Do Outside of Sin City

How Much Do Seats Cost at a Golden Knights Hockey Game in Las Vegas?

Surprisingly, going to a hockey game in Las Vegas is not cheap. That said, the fact that home and away fans are split when popular teams are in town, this is understandable.

For the Oilers game that I went to, I was hard-pressed to find a seat under $100 USD. Lowers for the game I went to were $175 and up. This, of course, depends on demand and the team in town. You can find great seats to non-marquee games on the cheap. As per SeatGeek,  “Golden Knights tickets run as low as $29.00, with an average price of $173.00.”

I found my Golden Knights tickets on Stubhub for a great price.

What Are Standing Room Tickets Like at Vegas Golden Knights Games?

That said, there are standing room tickets on the cheap for most games. For the game I went to, standing room tickets were $40 and up. In my opinion, since the views are great pretty much anywhere in the stadium, this is a great option for those looking to save on your seats (or lack of).

Some section, because Vegas, are all-inclusive. This means free booze and snacks. This was my first choice however they were tickets available to these sections out on my visit.

Not getting all-inclusive seats was for the best as I came across standing room seats that actually have seats! I wasn’t sure how this was possible until showing up. Section 226 row WC2 is for handicapped seats!

I felt bad about it at first but the whole row was able-body people. I did buy on a resale site with nothing indicating that these seats were different, other than having seats in standing room section. This, quite possibly, makes these the best seats in the house. Easy access to washrooms, concession stands, and ample space to stretch out. Plus great views.

What’s the Food and Drink Selection Like at Vegas Golden Knights Games?

The food and drink offerings at Vegas Golden Knights games are great. From burgers at Shake Shack to Poke bowls at Tail & Fin, there is something for everyone. Same goes for beer and cocktails. There’s a great selection of craft and name brand beer, however, they are not cheap. Tall cans run ~$20 dollars!

Note, you don’t need to go to a game to get hockey-inspired eats in Vegas. Around town, you will find several locations offering up unique drinks and Vegas Golden Knights themed snack including peanut butter and chocolate hockey pucks and a McFleury boozy` shake that looks crazy good.

What Are the Amenities Like at Vegas Golden Knights Games?

With the large section of eateries and beverage stands, line ups were not an issue on my visit. On top of that, there are self-serve market type areas for even faster service.

Other interesting and convenient touches include plenty of bathrooms, bars, lounges, breastfeeding stations, and plenty of cell phone charging stations. The chargers are not surprising given it is, after all, the T-Mobile Arena.

What Are the Fans Like at Vegas Golden Knights Games?

Probably my biggest surprise about going to a hockey game in Las Vegas was just how loud the local fans can be. This goes beyond the stadium. With the amount of apparel around town, Vegas is all in on the Golden Knights. Turns out, being the first professional franchise in town has paid off.

Inside, despite being outnumbered by visiting fans, the locals held their own. That said, the loud couple next to me were looking up rules on their cell phones as the game went on. Gotta start somewhere I suppose!

There was also light jabbing towards visiting fans but nothing to the extend I have experienced in other cities. Detroit, I’m talking to you.

The only offensive thing I came across was a custom made “Trump 45” Golden Knights jersey ?.

Going to a hockey game in Las Vegas is all about the show. It is, after all, Las Vegas.

Be sure to arrive early for the pregame entertainment. Outsides you will find plenty of action with beer gardens and fan experience activities to enjoy. Inside, the show starts before the puck drops. There is a full-on knights battle on the ice with impressive projections on the surface.

Also, throughout the game, there are drummers and dancers who entertain till long after the last horn blows.

Would I go again?

Although the Oilers were waxed three-nothing on my visit, I had a blast. I would not only go to another Golden Knights hockey game in Las Vegas, but I would book a trip around one. It makes for a great excuse for a short getaway and the show that the organization puts on is one of the best in the league.

Again, with the right seats, it’s a comfortable and entertaining experience. 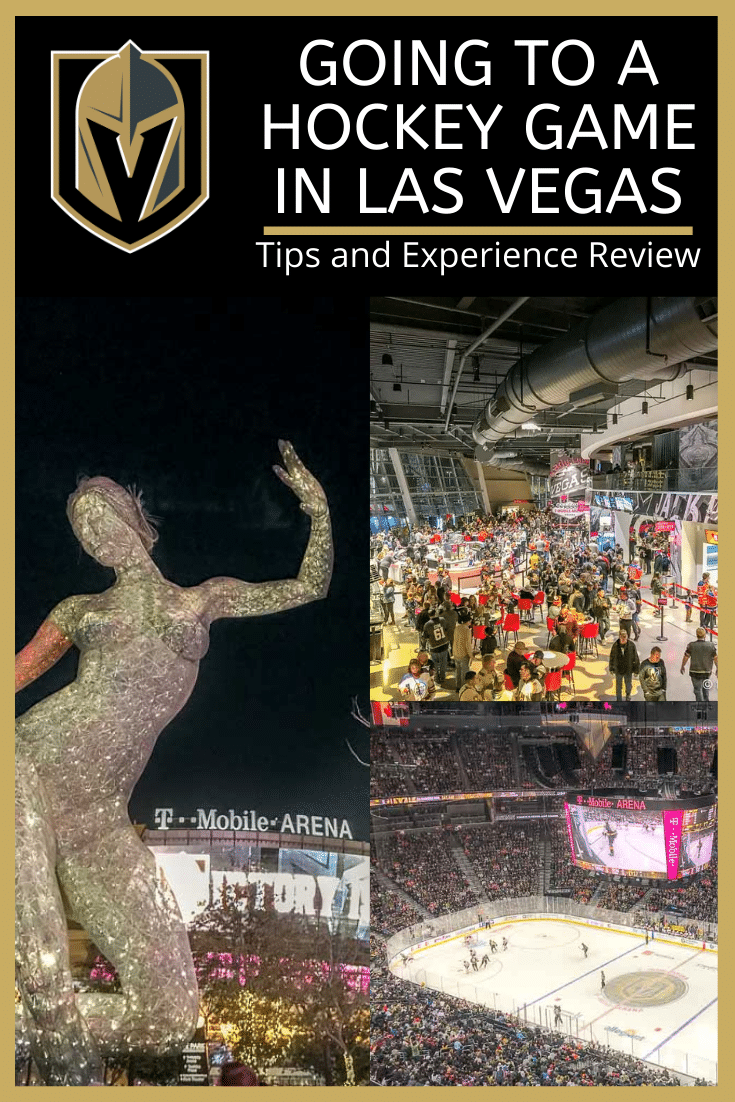 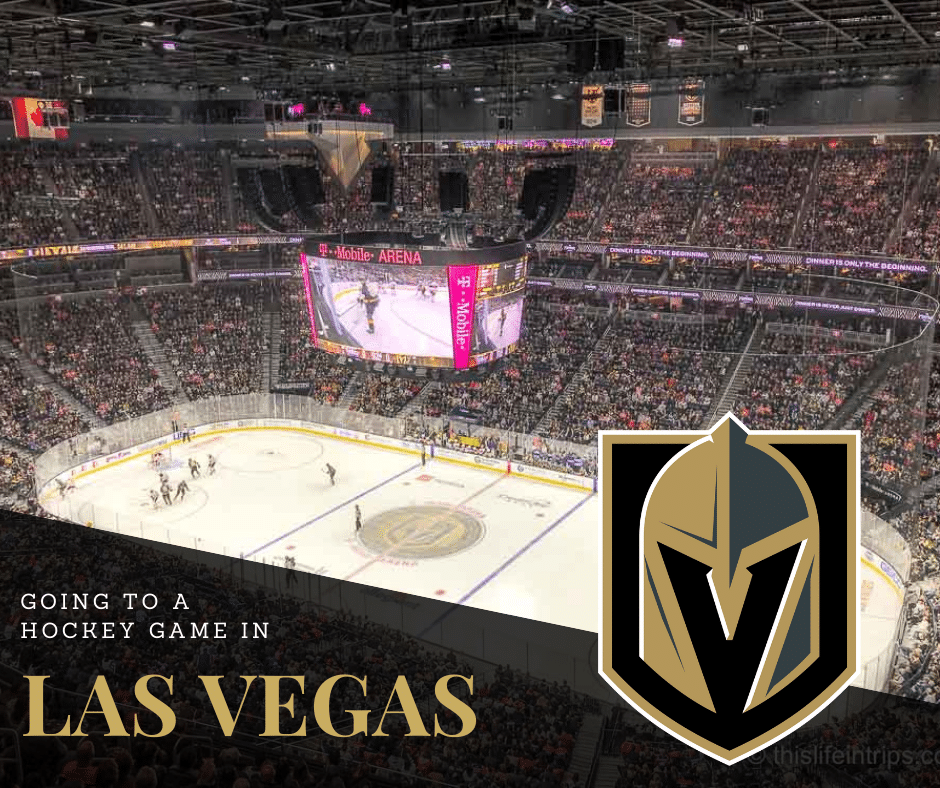 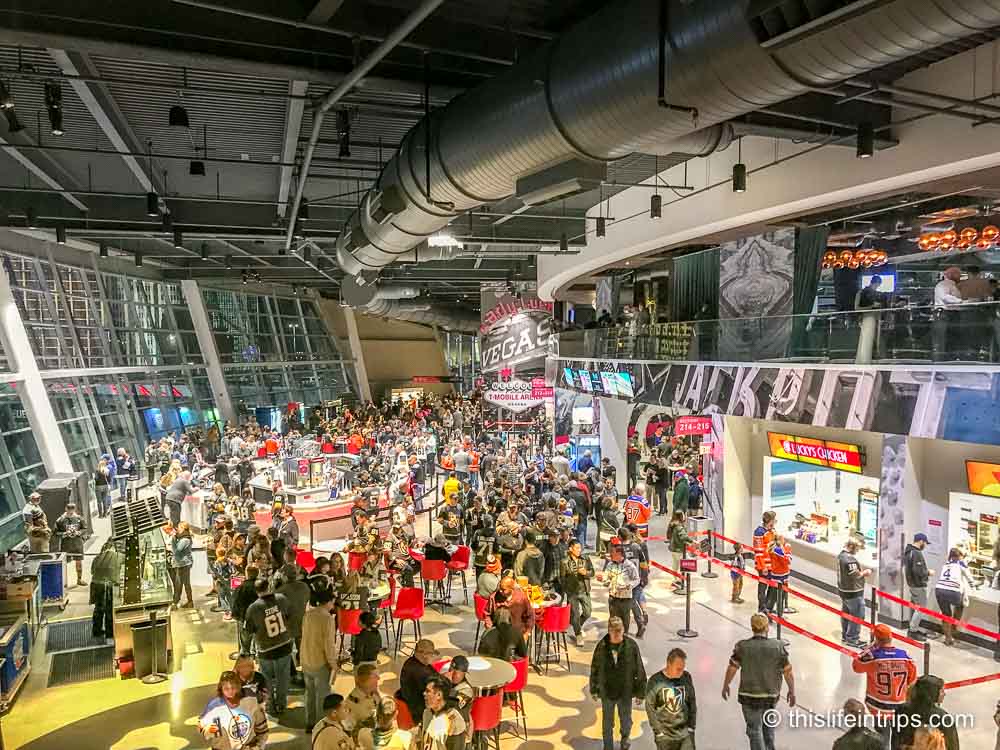 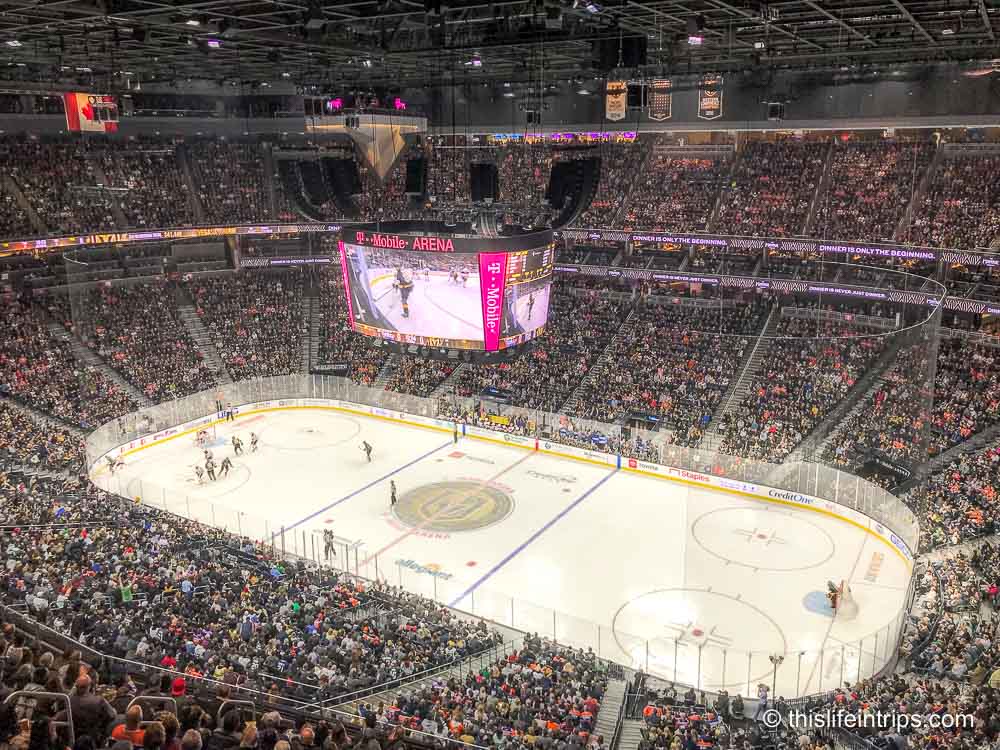 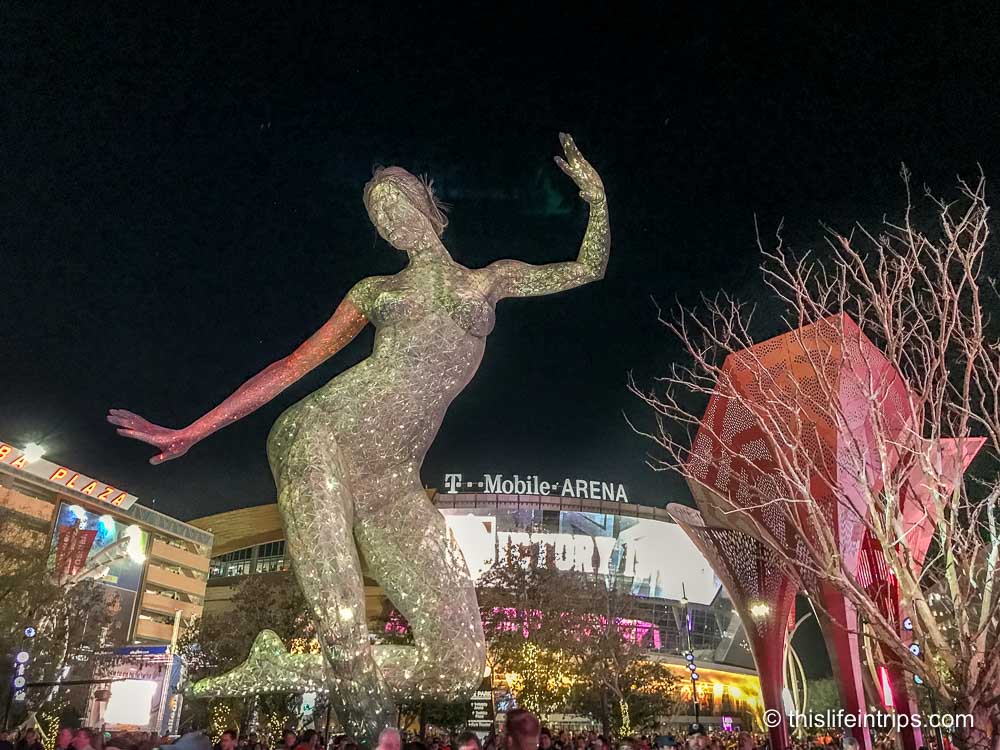