We arrived at the Coast West Beach  Inn sleepy-eyed and ready for a nap. Our flight south had us up at the ungodly hour of 3 AM so all our bodies wanted to do was shut down. Not the best way to start our 2 days in Santa Barbara but we were ready to make the most of it.

We were greeted by hotel manager Teresa, a bubbly and cheerful person who truly cares about her property and town. She happily rattled off an ambitious itinerary to help us cover as much of Santa Barbara as possible in the short time-frame we were given. Her excitement was contagious and made it clear that there was no time to nap as Santa Barbara has far too much to offer. 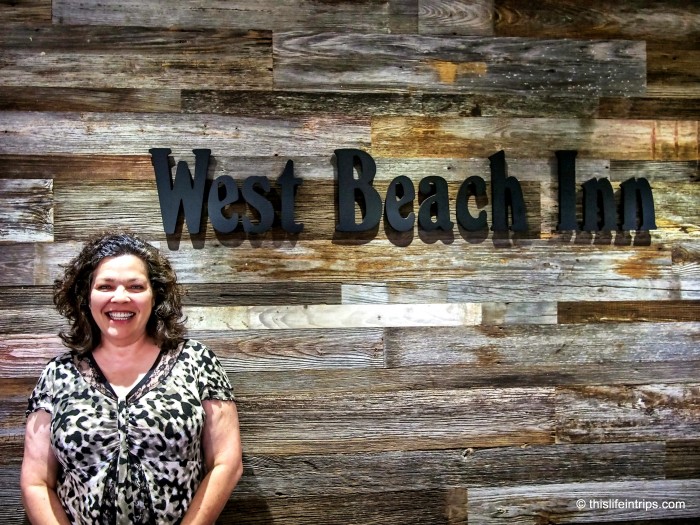 Feeling a bit famished our ears perked up when Teresa talked about where the best tacos in town were. Sold. Armed with a stack of pamphlets and brochures we headed out to see if Santa Barbara lived up to the hype. Within minutes were on the beachside bike path on our rented cruiser bikes in search of Santa Barbara’s best tacos.

After a few minutes of peddling, we arrived at the La Super-Rica Taqueria, a cute little taco stand made famous by the late famous chef Julia child’s and her comments on how much she liked the place. Teresa advised us that the taco stand was known as a tourist attraction and not so much for the food. This eased our disappointment when we arrived to find the doors locked with a sign saying it was temporarily closed. Thankfully Teresa and her staff recommended a second (first really as they said the food was better) option less than a block away. 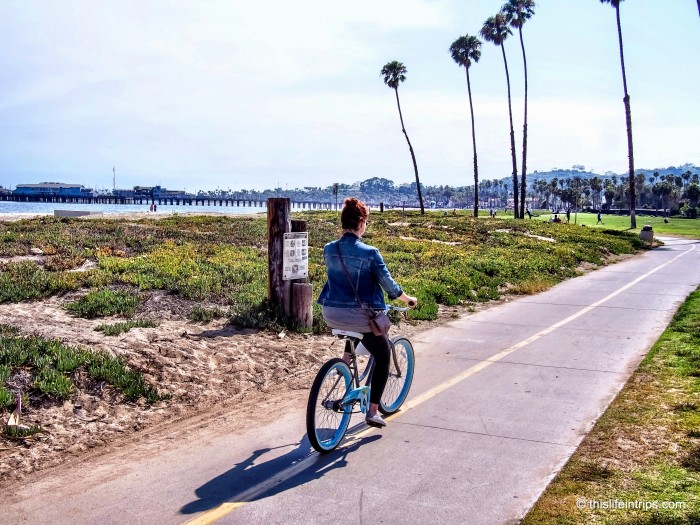 Although we were wanting a quick taqueria style stand, the Los Agaves Restaurant did not disappoint. Although they are more of a high-end Mexican restaurant they allowed us to order individual fish tacos which are now some of the best I’ve ever had. Freshly pressed and warm tortillas had a lot to do with it. Even though we were trying to save room for our early dinner reservations I couldn’t leave without trying their lamb special which was simply amazing. 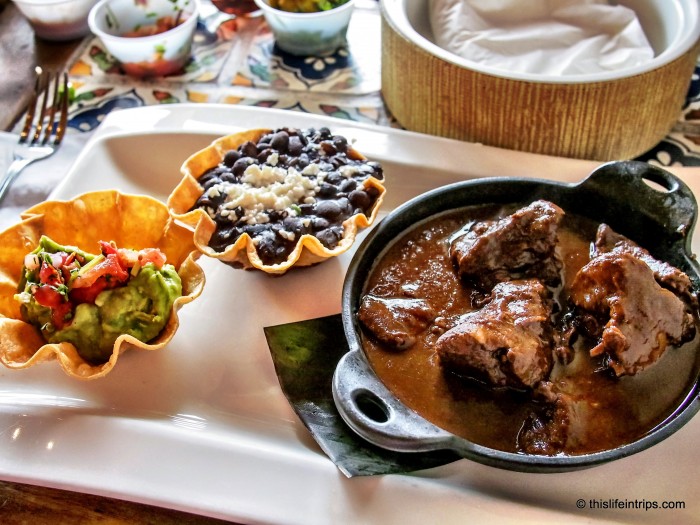 Bellies fuller than we wanted, we saddled up on our cruiser bikes and headed towards Funk Zone – a revitalized area of Santa Barbara chalked full of microbreweries, distilleries, wineries, bars, restaurants, and hip artist spaces. It was as if this leg of the #GreatCoastRoadTrip was hand-picked for me!

On the way, we passed by Telegraph Brewery Company  – Santa Barbara’s only brewery with distribution. There we sampled a few easy drinking brews and chatted up the server about Telegraph’s cool space. 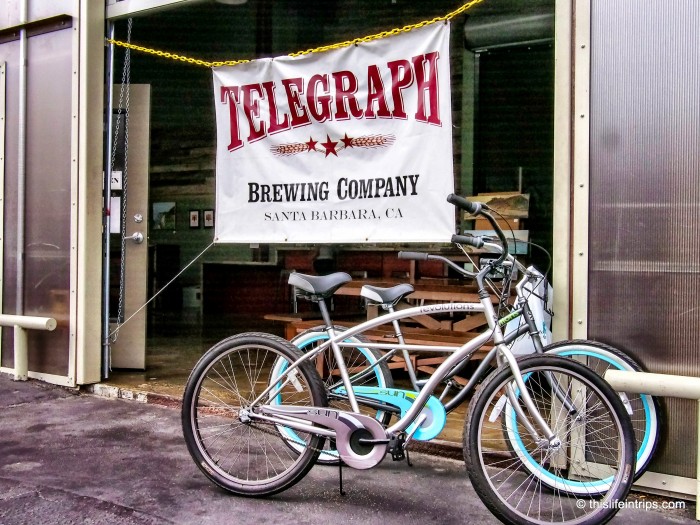 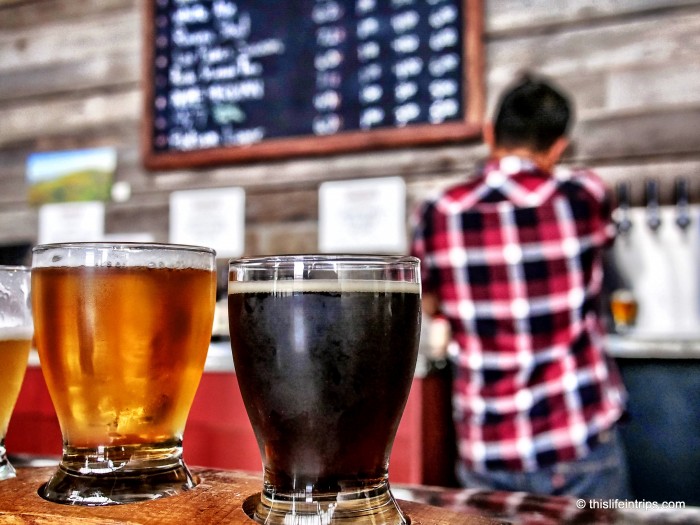 From there we hit Lark, Santa Barbara’s newest, hippest, freshest eatery. I will say this, I am a food snob. 100%.  Vancouver has spoiled me with some seriously great restaurants and because of this I’m not easily impressed when it comes to dining out. It is what it is. That said, the Lark in Santa Barbara blew me away. From its super hip environment to the incredible service and amazing food, this restaurant has easily etched its way into my all-time favourites. It’s just that good. If you only have 2 days in Santa Barbara be sure to eat here! 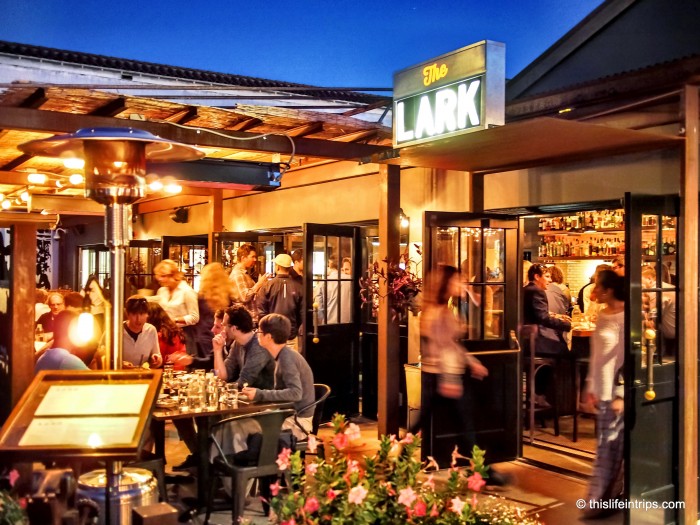 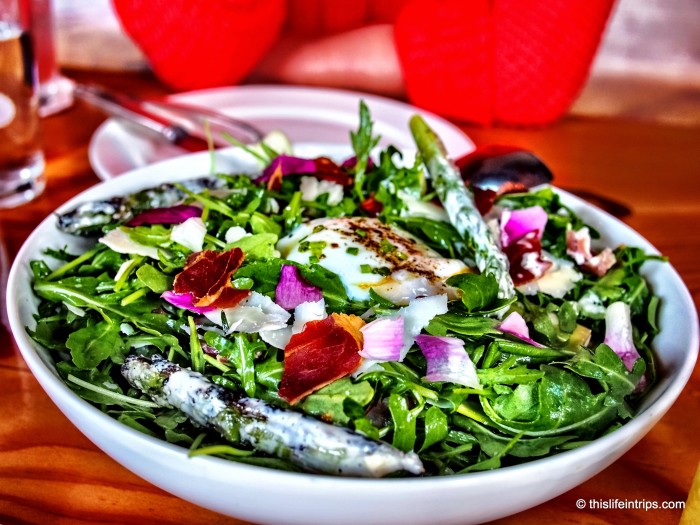 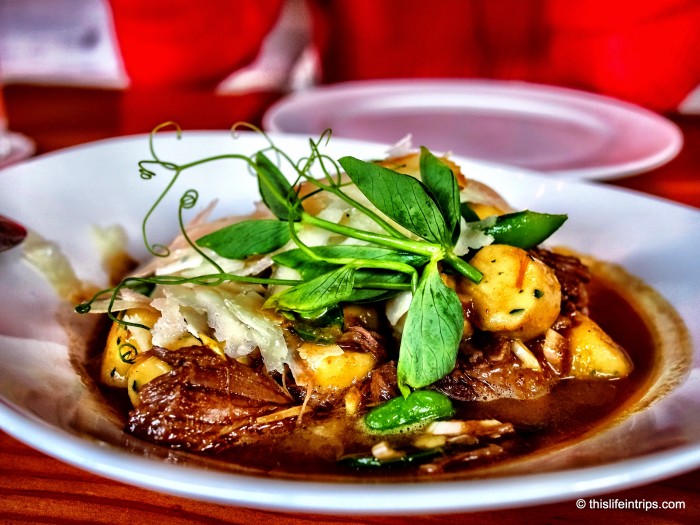 Our meal was made better by some good conversations with a couple from Southern California. We picked their brain on where to go/see/eat at on our next #GreatCoastRoadTrip stop. Always nice to get locals thoughts! After our meal, we hit a couple microbreweries and pubs in the Funk Zone before capping off one great (and long!) day in Santa Barbara.

2 Days in Santa Barbara – By Land and Sea

Our Second day started with some much-needed rest – although it was unintentional as my phone died and my alarm didn’t go off. After touring the West Beach  Inn property with Teresa (more on this later – too much interesting stuff to fit into one post!) we were off for a quick breakfast at the original (and the last) Sambo restaurant.

This once popular 50’s style chain took some heat for its questionable cartoon mascots (loosely based on The Story of little Black Sambo) and has slowly shut down locations one by one over the years. Pancakes with a side racism aside, Sambo serves up some great flapjacks.

After consuming our monthly allotment of carbs in one sitting we wobbled our way over to State Street and along the touristy pier before meeting up with one of the oddest tour buses I have ever seen. 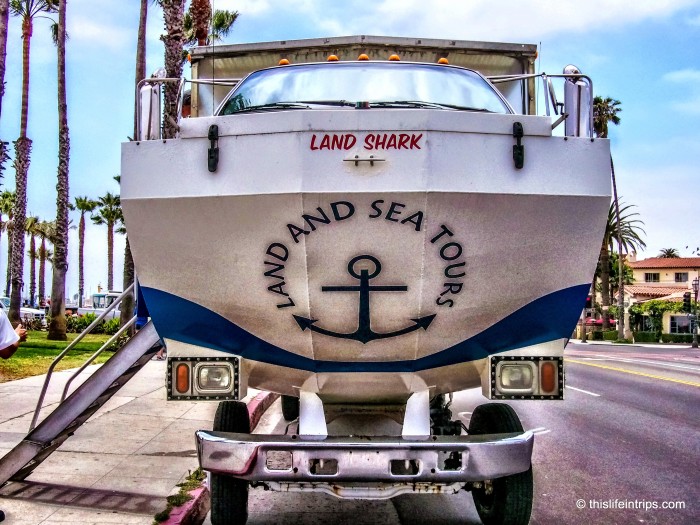 Check out this behemoth. This massive tour bus takes guests on an adventure high above Santa Barbara streets AND through its clear blue waters. Mind blown? 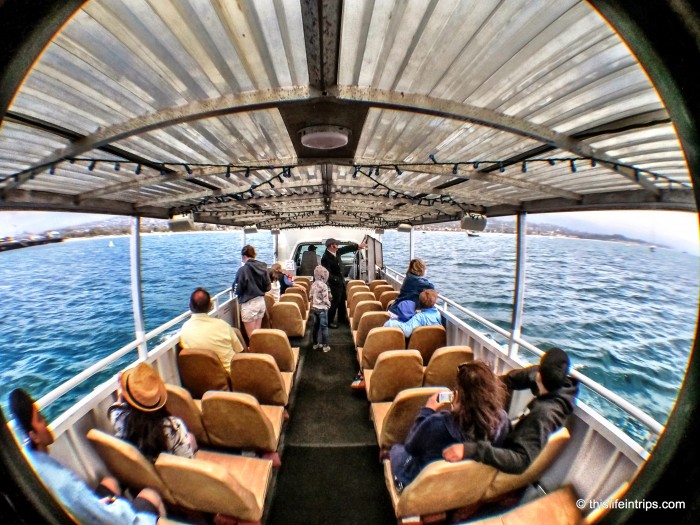 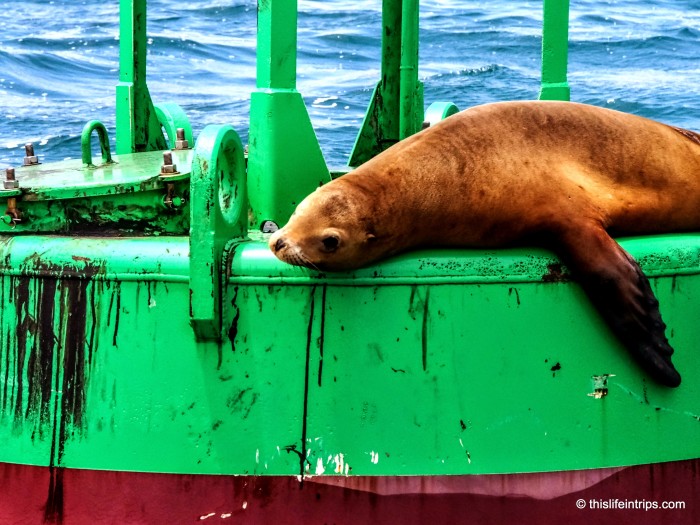 Although the experience is a bit cheesy, the tour guide is great and the fact that you drive into the ocean is worth the trip alone. Plus if you only have 2 days in Santa Barbara this is a great way to cover a lot of ground (and sea!).

Back on land we hopped aboard Santa Barbara’s super convenient and super cheap street car. For 50 cents (50!) you can ride the length of State Street in an electric trolley. How great is that? 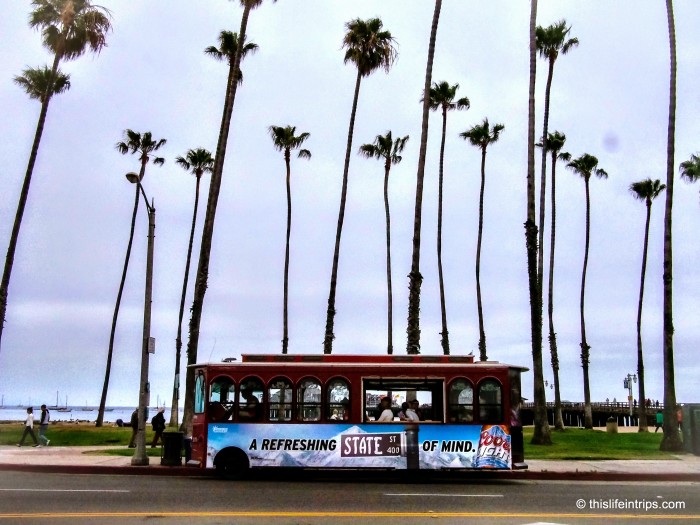 State Street is the city’s main commercial road and is lined with restaurant after bar after restaurant. If you are looking to shop State street is where you will find brand name stores as well a mall. We were looking to sight-see so we hopped off and walked over to the Santa Barbara Courthouse, the most elegant and therefore photographed of its kind. 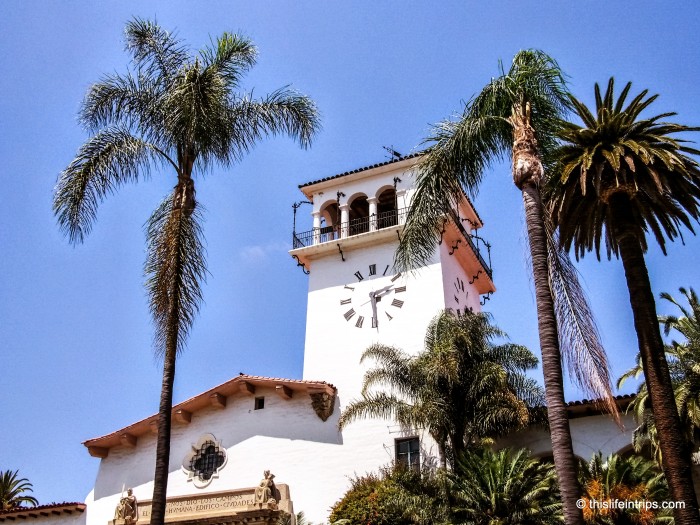 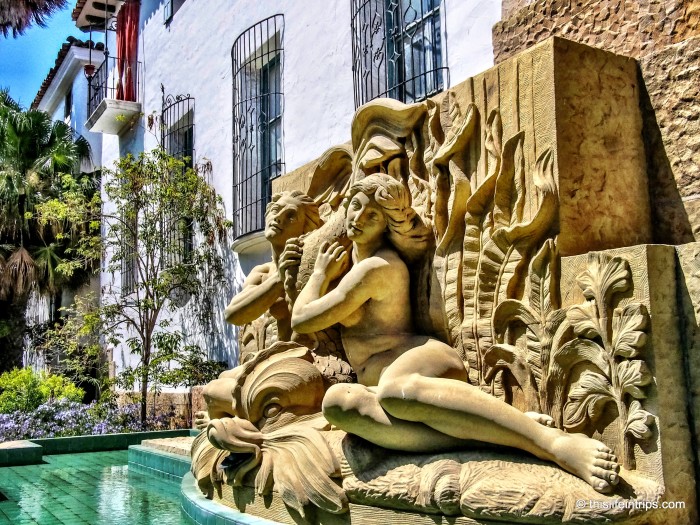 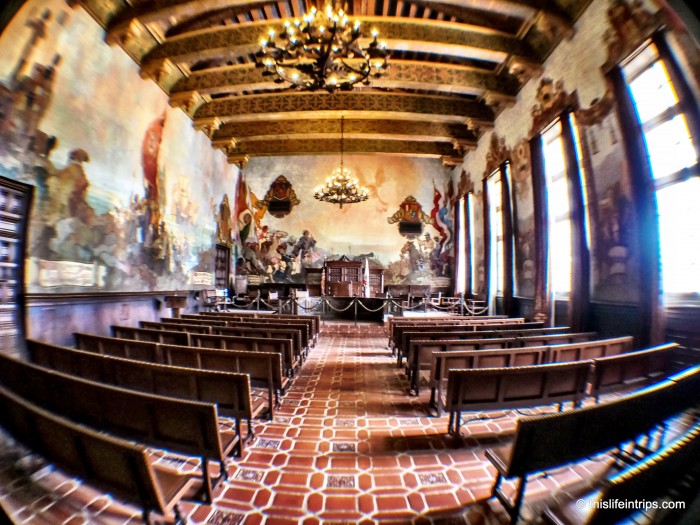 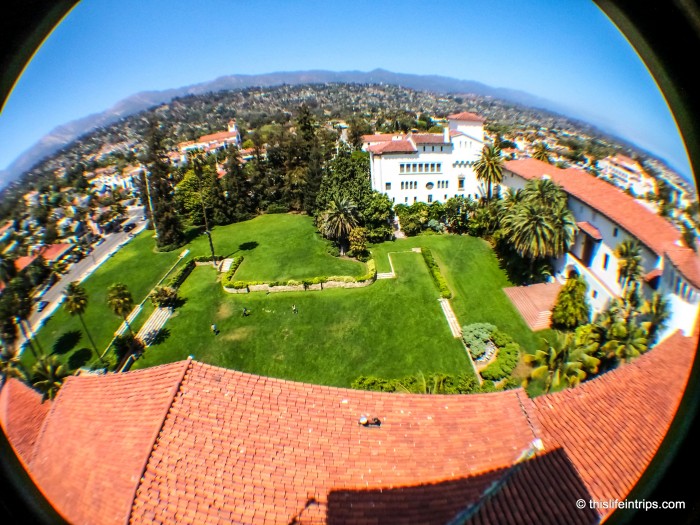 After taking in the view from the Clock-tower we made our way down State Street window shopping, taco eating, and beer drinking along the way. We then headed back to the Funk Zone to get on the Urban Wine Trail…which is exactly what it sounds like… and it’s awesome. 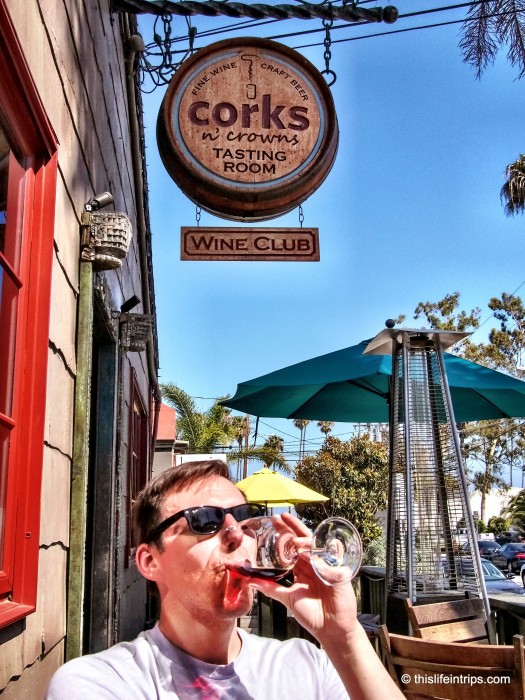 The Urban Wine Trail is a collection of local wineries and tasting rooms scattered throughout the city. A high concentration of those are conveniently located in the Funk Zone. We were pressed for time but managed to stop in and have a few tastings at a couple of locations – our favorite being Municipal Wine Makers for its creative space and smooth finishing wines. Think hip craft brewery but serves wine. 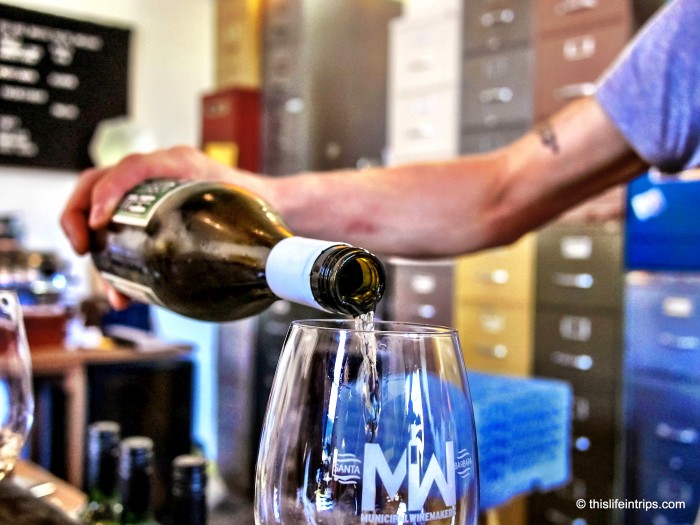 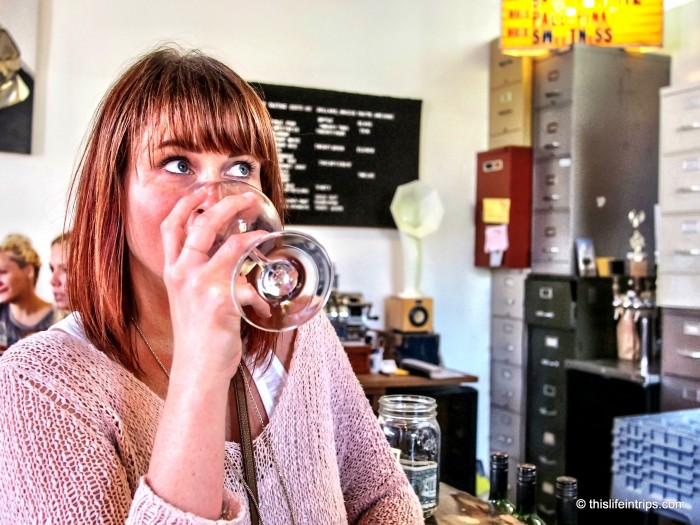 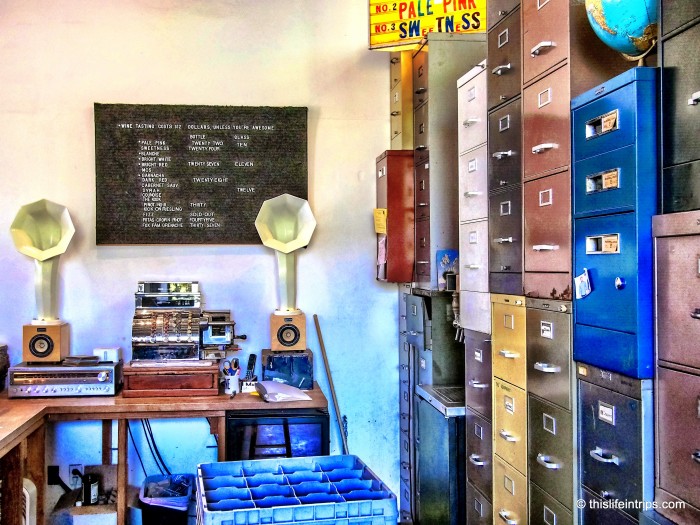 2 days in Santa Barbara is not Enough

Our 2 days in Santa Barbara came to an end with a tasty meal at Toma, TripAdvisor’s #1 rated restaurant – conveniently located a block away from the Coast West Beach  Inn.  We once again ran into our friendly dinner companions from the night before and got last-minute recommendations for our next stop, Burbank California. The meal was great as is its quaint location and intimate setting.

Reluctantly we said our goodbyes to the surprisingly hip and welcoming city. With that came the realization that 2 days in Santa Barbara just isn’t enough time to truly enjoy what it has to offer. Just like the previous California Governor and part-time Santa Barbaraite said,

2 days in Santa Barbara and the #GreatCoastRoadTrip is brought to you by Coast Hotels. Come along at roadtrip.coasthotels.com or through the social media links below.