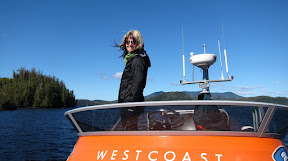 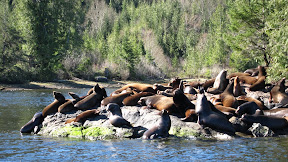 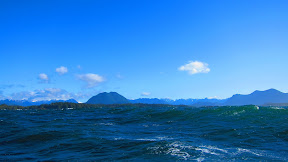 “Where’s John?!?” Those words will forever be engraved in my head. A panicked Dani shouted this when she lost site of her husband while whale watching in Tofino in rough water. We were in 2-3 meter swells off the coast of Tofino and clearly not having any fun. I was at a loss for words as we rode huge wave after huge wave. I felt like a jerk. I had treated Erin’s folks to a nice resort and private whale watching tour (because no one else was dumb enough to go that day) and Erin’s mom thought she was going to die and that her husband was swept out to sea. Good Job Shaun. Although he was not dry, John was fine. He was on the top deck with the captain getting drenched by crashing waves. Obviously no whales could be seen so, to the delight of everyone, we headed up an inlet for calmer waters. There we saw tons of bald eagles and fatty fat fat sea lions. Whale watching in Tofino fail for the day but we will be back to watch the fuck out of those fat mammals.

Dani and John had been enjoying island living for about a week before we got there. They had been on the west coast for about a month as they were house/cat sitting for us while we were in Europe. While on the island they enjoyed a couple nights in Victoria in a hotel with a “bathroom bigger than their bedroom” as a Christmas gift from Erin and I. They were then upgraded at the resort they booked outside Parksville after finding “DNA” on their blanket. So by the time we got to our fancy beach front resort in Tofino it was understandably “OK.”

We were picked up earlier that day in Nanaimo after Erin and I took the short float plane hop to “Surrey by the sea.” That flight was awesome. Taking off alongside Stanley Park and slowly climbing over the Lions gate bridge is a great experience. 8 minutes into that flight we passed the ferry we would have been on that left 1 hour earlier.

On our way to Tofino we stopped in Coombs famous (at the time goat-less) “Goats on the Roof” market. This brought back memories of when I was there when I was 6 years old. 25 years later and I still find this fascinating. We also stopped for an incredible sunset:

Although our whale watching trip was a bust, it was sunny outside. Seeing sun in Tofino is apparently harder than seeing whales so we took it. We enjoyed a bright and very windy day on Long Beach.

That night we enjoyed fresh local crab at our hotel. These guys were almost as tasty as they were mean.

Full we enjoyed sunset on the beach before calling it a long day.