I mean, it is located in Hollywood…

First impressions upon pulling up to Universal Hollywood will be very familiar to Universal Orlando. Both theme parks have expansive City Walks leading to the gate – a collection of shops and restaurants, and entertainment options. Many of the restaurants and bars are the same such as Jimmy Buffett’s Margaritaville. Notable standards in Hollywood CityWalk is the surprisingly good beer at Karl Strauss Brewing and Portland’s favourite treat – Voodoo Doughnuts.

Inside the gates, the similarities are still there however on a much smaller scale. You can still visit the Wizarding World of Harry Potter although there’s no Diagon alley and no Hogwarts Express connecting it to Hogsmeade.

Wondering what Hogwarts house you belong in? Take this quiz before you go!

There is a Springfield USA so you can still have a pint at Moes, but again, in a scaled-back version. 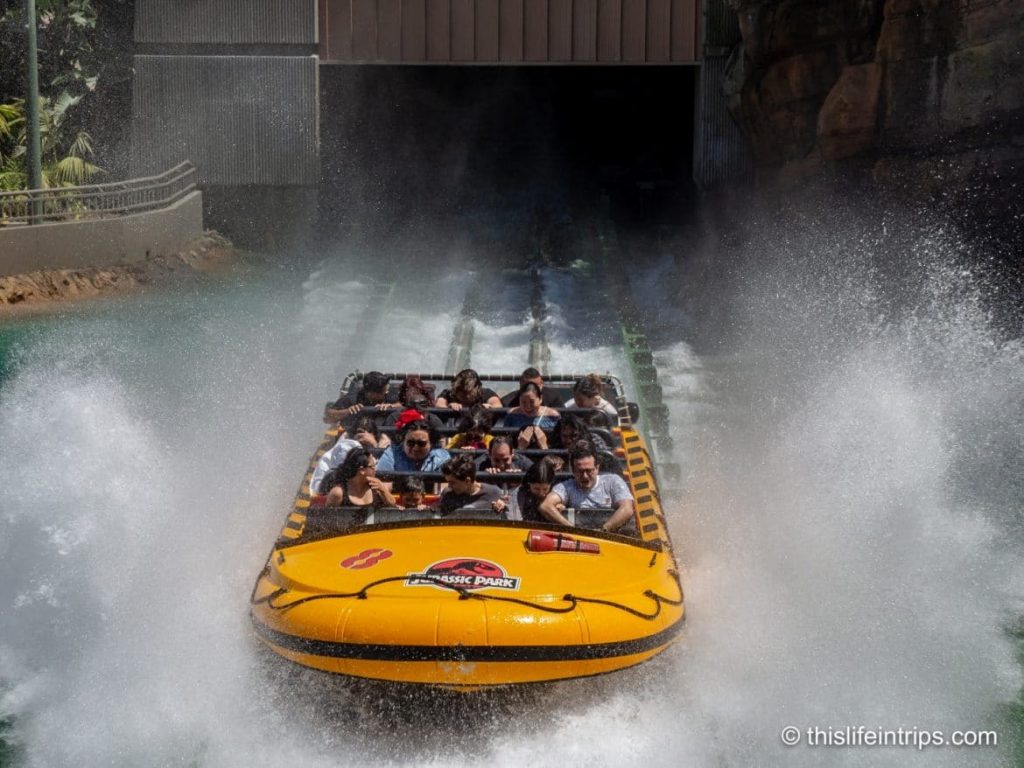 One “ride“ that is unique to visiting Universal Studios Hollywood is the World-Famous Studio Tour. This attraction sets Universal Studios Hollywood apart on its own. Guests are taken on an hour-long tour through Universal/NBC sound studios and sets. Although you never leave the tram car, you do go past studios where current shows like The Voice are filmed as well as locations that have been used in classics film and television scenes spanning a century. These include Back to the Future, Jurassic Park, and The Grinch.

Notables to me included a collection of cars used in film including Magnum PI’s Ferrari 308 GTB/GTS and the set of Jaws/Murder She Wrote. Yep. Jessica Fletcher’s small New England town and the Jaws ride are one and the same.

Then there is the unreal apocalyptic setting of a downed 747 used in the 2010 remake War of the Worlds, which is truly out of this world.

This isn’t the first time I have been behind the scenes in Hollywood. Over at the adjacent Warner Bros. studio, I took a walking tour of the set there. Where Universal Studios Hollywood differs is, because it is a theme park, the studio tour is actually a ride.

During the tour, the tram pulls into three different sets for a little Hollywood magic. This includes two 3-D rides – Fast and the Furious, and the Peter Jackson directed King Kong. The latter puts you and your tour bus in between a T-Rex and the famous giant ape.

Although there is a version of Animal Actors at Universal Orlando, seeing the show at Universal Hollywood just feels more Hollywood. This 30-minute show was actually the highlight of my time visiting Universal Studios Hollywood. Who knew rats and cats could actually be trained?

While visiting Universal Studios I stayed at the nearby Garland Hotel and highly recommend it. It truly is a classic California hotel with a motel feel straight out of the 60’s. On top of a good nights rest and a complimentary shuttle to Universal Studio’s front door, The Garland offers a great place to relax after a day out. Sit poolside, chill in the hotel’s hip courtyard, or partake in one of its many theme nights. On my short visit, it was California Craft Beer Night. I can (and did) totally drink to that.

What say you?
Thoughts on What Makes Visiting Universal Studios Hollywood so Hollywood?
Let’s hear it!

Although I was provided a complimentary day visiting universal Studios Hollywood,
the experience, opinions, and fangirling are my own.