Antalya ruins are plentiful. Here’s how to see the highlights in an efficient way.

With its mountain meets Mediterranean location, Antalya attracts visitors from all over the globe for its natural beauty. There is sunshine, long stretches of sandy beaches, and even a waterfall flowing into the sea.

That said, there is another side to Antalya, one that spans centuries.

With the Greeks and Romans once ruling the Turquoise Coast, there are plenty of ancient Antalya ruins to explore. The most significant sites can be experienced on a day tour. Here’s my time doing just that.

Compare prices on flights to Antalya with Skyscanner

The city of Antalya was long believed to date back to 150 BC when it was established as a Greek naval base. Thanks to recent excavations, this original settlement was actually built on top of an older one dating back to the 3rd century BC.

Despite its age, there aren’t a lot of ruins in the city itself. This is largely due to the ever-changing hands that ruled the land over the years. Still, there are several historical Antalya ruins to explore. The most significant include Hadrian’s Gate, Korkut Mosque, and the Hidirlik Tower.

Arguably the most visited (and photographed) of all of the Antalya ruins is Hadrian’s Gate. This triumphal arch was built in honour of Roman emperor Hardin and dates back to 130 AD. Today it is the only remaining gate to Antalya’s old town and harbour.

Originaly a Roman temple built in the sixth century AD, the Korkut Mosque took over in the 9th century during the Sultanate of Rum rule. This back-and-forth continued until the building was destroyed by fire in 1800. In 2021 it was restored to welcome worshipers once more.

Since its construction in the second century CE, the Hidirlik Tower has been used as a lighthouse and for fortification purposes. Today it serves as a beacon overlooking the old town harbour. It’s also a great place to watch the sun go down.

For a great overview of these Antalya ruins and more consider a walking tour of Kaleici!

Even though there aren’t many sites to explore within the city itself, the Archaeological Musem does house plenty of artefacts from Perge, Side, and Aspendos. I highly recommend visiting here before or after your day tour to get a better appreciation of the history around the sites.

Although the Antalya ruins inside its old town are worth exploring, there is much more to see in the surrounding area. With more than 45 archaeological sites in Antalya Province, I searched for an efficient way to cover the highlights.

There are several day tours departing from Antalya and after some reading, I landed on a tour that gets you to three significant locations – Aspendos, Perge, and Side. The tour gets high ratings on TripAdvisor and Viator and at just $70 CAD per person with lunch included, it’s a great deal. I booked it and was off the following morning to check out some of Antalya’s best ruins.

The Ancient City of Perge

My day started with pick up from my old town accommodations. After collecting a few other guests, we transferred from a smaller car to a touring bus just outside the gate and then made our way to the first stop, Perge.

Located 15 km (9.1 mi) east of Antalya, Perge was once the capital of the Roman province of Pamphylia Secunda. As such, the footprint of this site is massive, spanning several city blocks.

Our guide gave us a great rundown of the city’s layout and history over a model of the ancient city before letting us loose to explore.

Any time I find myself roaming ancient ruins I am in a daze. My head has a hard time comprehending how anything this large and complex can be built without modern technology. From the Roman baths to the column-lined road, this UNESCO world heritage site has surprises at every turn. On my visit, this included a curious cat out for a stroll and a turtle seemingly miles from water.

All of this amazement really comes to a head at the nearby stadium, one of the best-preserved Roman theatres in the world. Still, it doesn’t compare to our next stop – Aspendos.

If Perge is head-scratching, Aspendos is mindblowing. This massive Roman theatre has been incredibly well preserved, so much so that modern concerts and shows are still performed here. What an experience that must be.

After traditional lunch at a riverside café, our tour of Antalya ruins continued with a visit to Side. Pronounced “see-day,” Side translates to pomegranate in Greek. The modern seaside town is alongside and on top of the ancient city which stretches along the peninsula.

There are an uncountable number of ruins on the drive into the tourist center. These include an aqueduct, an ancient theatre, and even a hospital from the sixth century.

The tourist stop is, oddly, built on top of the old city. There are glass windows allowing people to walk over and Pierre down on ancient artefacts and foundations of the old buildings. This all leads to the Mediterranean and the true highlight of Side, The Temple of Apollo.

The Temple of Apollo.

Built around 150 A.D., this temple was dedicated to Apollo, the god of music, harmony, and light.

Today, five columns have been restored, giving guests a glimpse of what this site once looked like. Again, head scratching to say the least.

After enjoying some Turkish ice cream while peering down on an ancient site (weird), our tour made its way back to Antalya with a bonus stop at Manavgat Falls.

After enjoying my time, exploring, lower and upper Duden Falls, this added stop appealed to me however, as I found, the water levels were too high to enjoy. The location is also very touristy. I would avoid this stop in the future and instead take a dedicated waterfall tour or explore Lower and Upper Duden on your own.

Other Antalya Ruin to Explore

This day tour is a fantastic way to see some of Turkey’s incredible ancient ruins. I highly recommend for anyone visiting Antalya who are into more than beaches and waterfalls.

If you were looking for more Antalya ruins to explore, consider taking a tour of Termessos. This ancient city is built high in the Taurus Mountains and lay 17 kilometres north of the city. This area is largely left to nature and is less touristy than Side or Perge. I highly recommend a guide to help you explore the area.

What say you?
Thoughts on this Antalya Ruins day tour?
Let’s hear it!

For more reviews from Turkey and beyond see HERE. 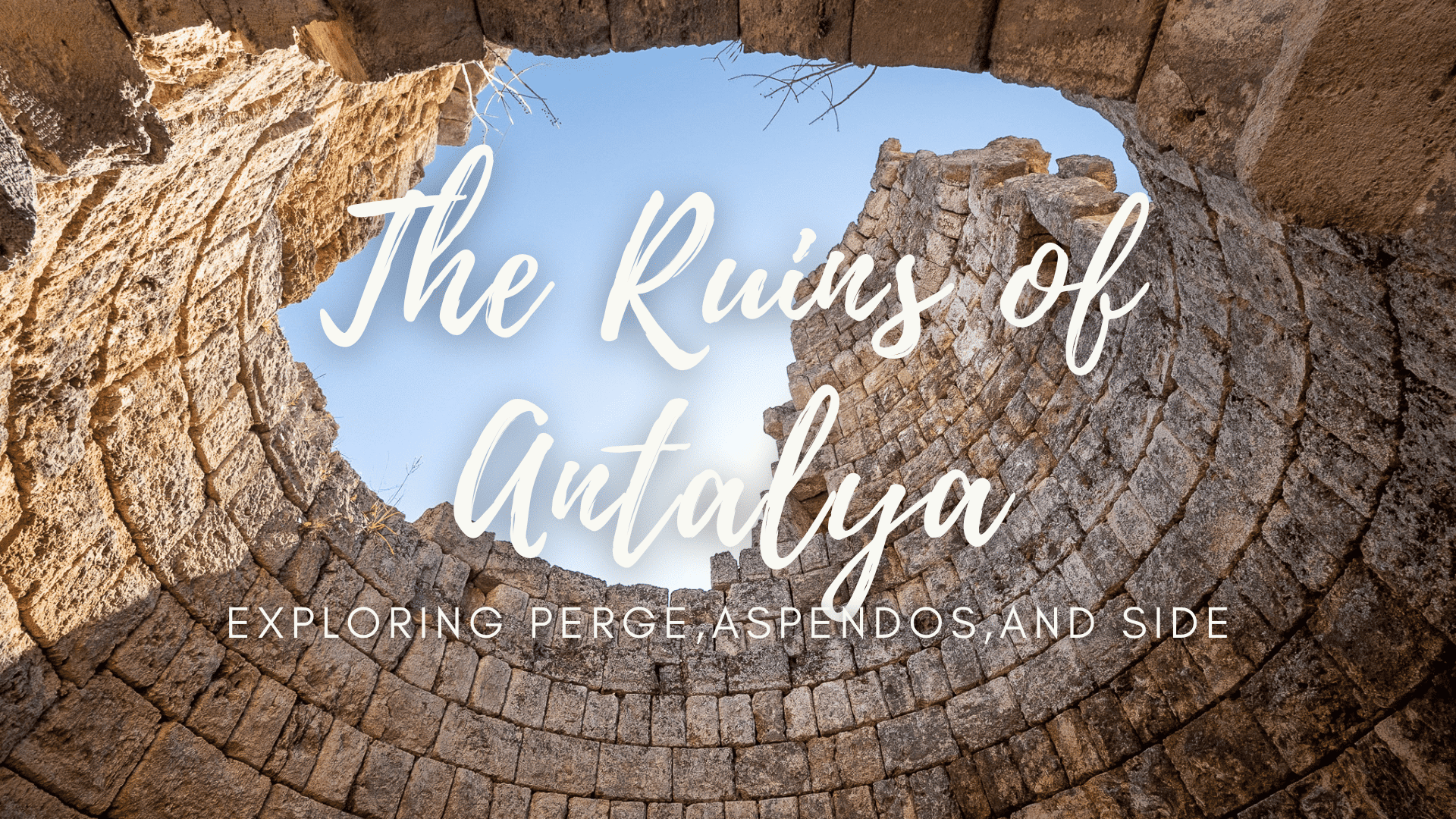 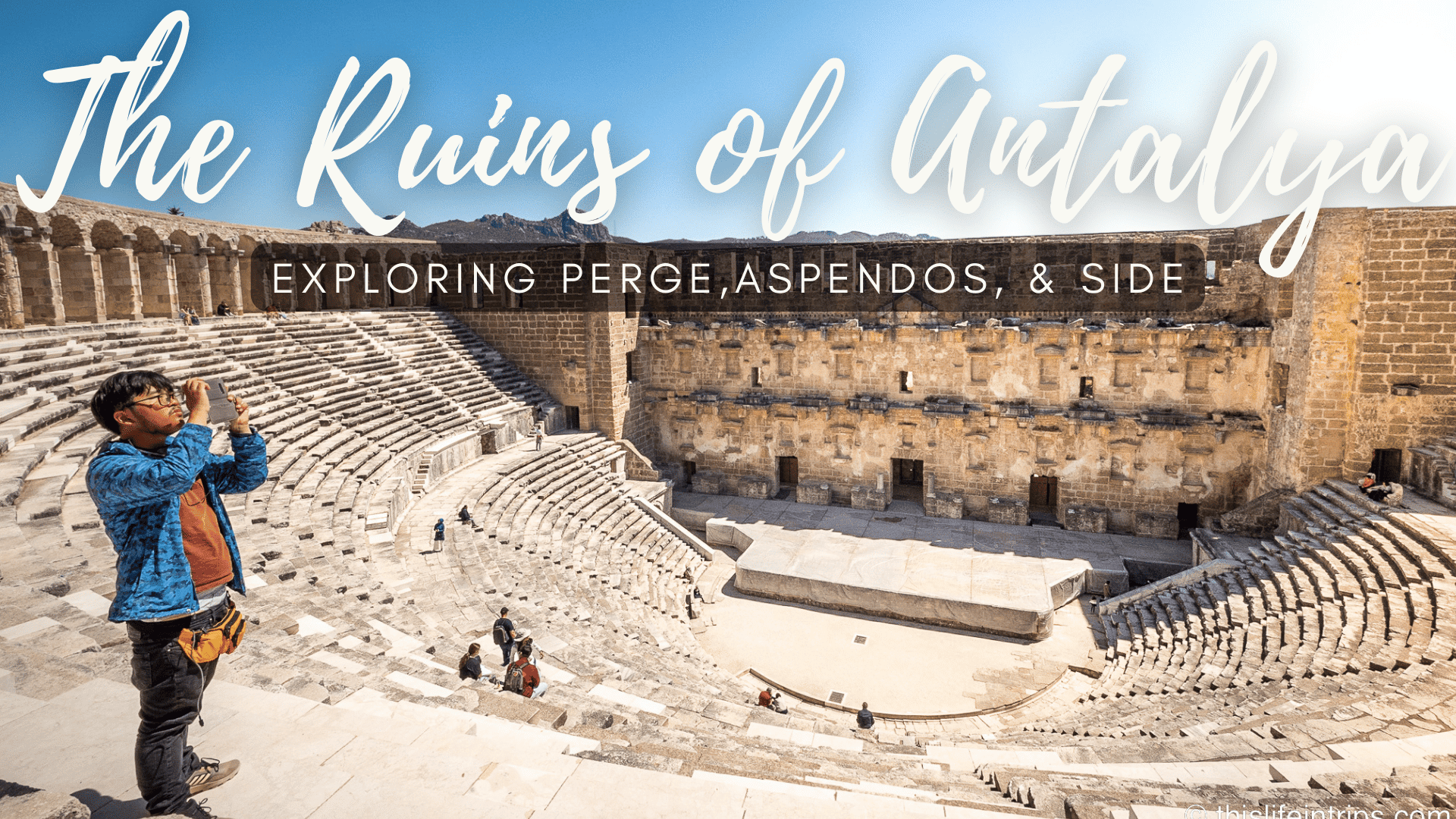 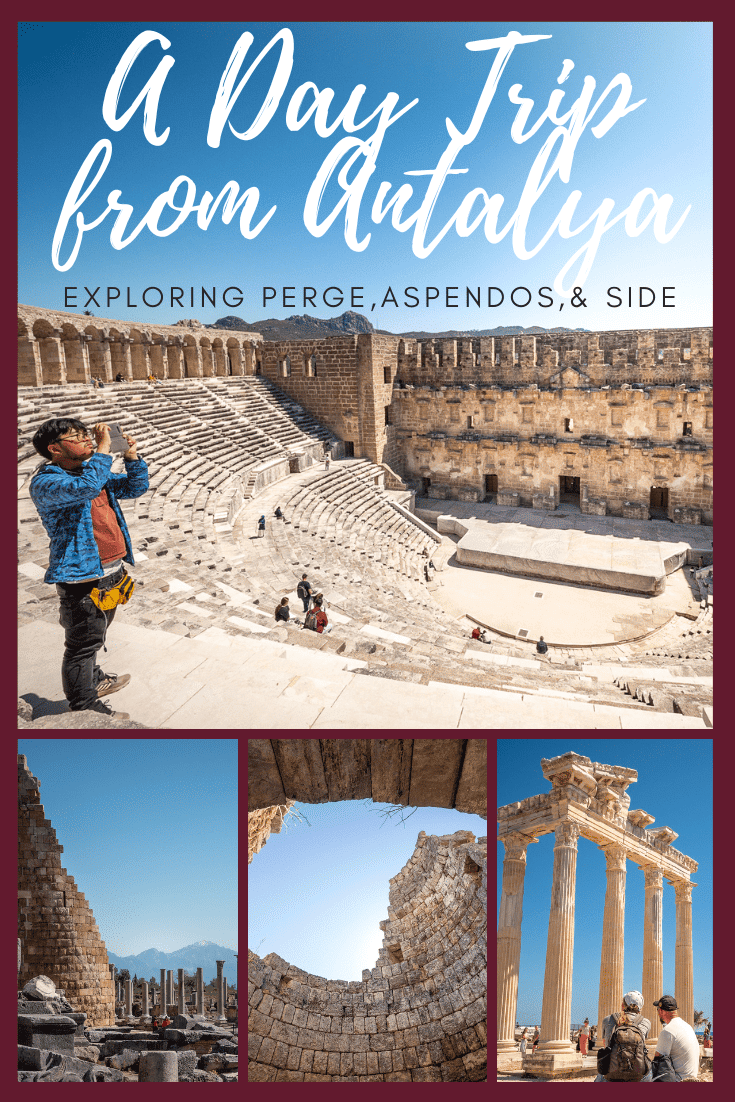 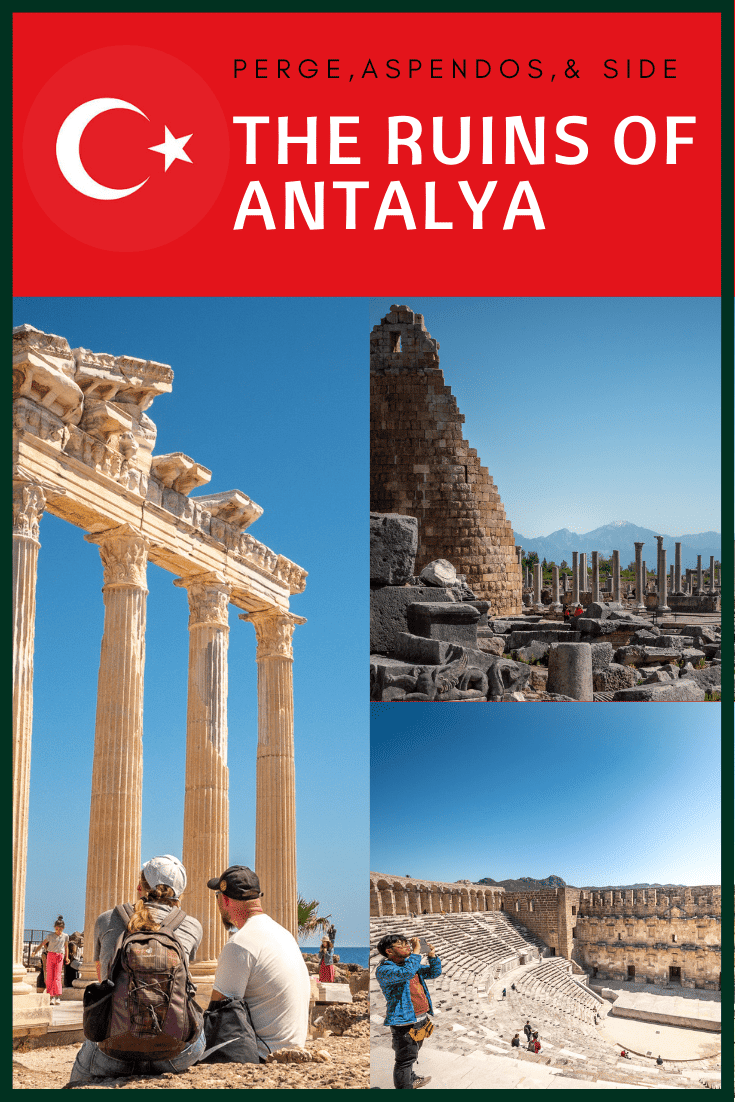