As we walked along the River Lagan towards the famous shipyard and Titanic Belfast Museum home, I couldn’t help but wonder what it’s all about? Before visiting I was very naïve to Belfast’s shipbuilding past and could only focus on one thing, “why celebrate such a failure?” Surely this was a black eye in the city’s past. Why open old wounds? Well, in short, the Titanic left here fine. Of course the long answer is much more interesting and something the Titanic Belfast Museum tells in an incredibly interactive and fascinating way.

With the massive Harland & Wolff cranes in the distance I started to realize the sheer size and manpower it took to build such a ship. Then I saw the museum. Shiny, pointy, and 126 feet tall (the same as the Titanic itself), the Titanic Belfast Museum stands as one of the most unique looking museums I’ve ever seen. The building is there to represent Belfast’s shipbuilding past and does so in imposing and impressive fashion – all from the very spot the Titanic was built and launched from. 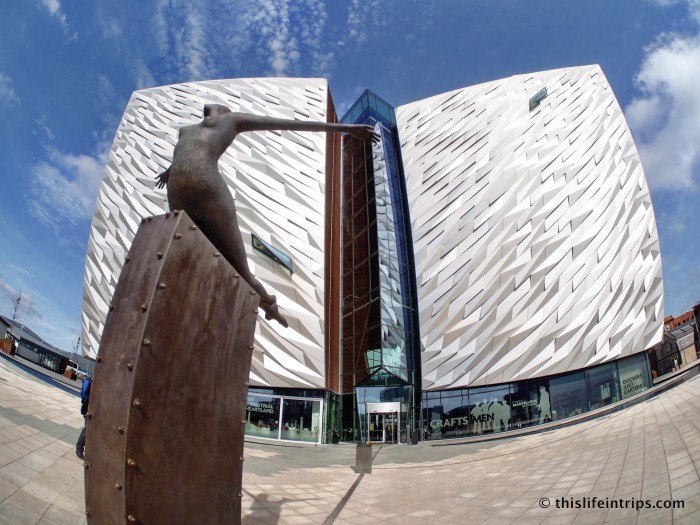 With my novice approach to the Titanic Belfast Museum I entered to find one modern looking museum. I couldn’t help but think of the Disney-like environment I found at the Kennedy Space Center as I passed the gift shop. These thoughts returned later as the tour boarded what appeared to be a roller coaster ride. It felt out of place – like there was money to burn and space to fill. It did show how the Titanic was built in an interesting way though, emulating the heights and blaring sounds that went into building these massive ships. 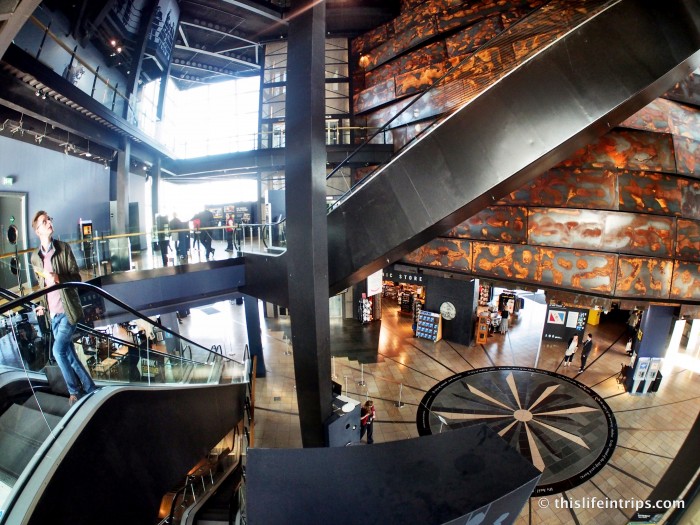 I was a touch skeptical of what I was getting into when our self-guided tour started. Belfast, as everyone but me is probably already aware of, has deep roots in manufacturing. From the rope work to the fabrics use to build sails, the hard-working Irish were instrumental in paving the way for Belfast becoming the world’s largest shipyard. During the mid-1800’s the rivers of Belfast were altered and land was reclaimed in order to create the shipyard that built the Titanic and many other mega-ships. The Titanic Belfast Museum does an amazing job telling this story and includes many interactive displays and historical documentation crucial to the city’s manufacturing story. 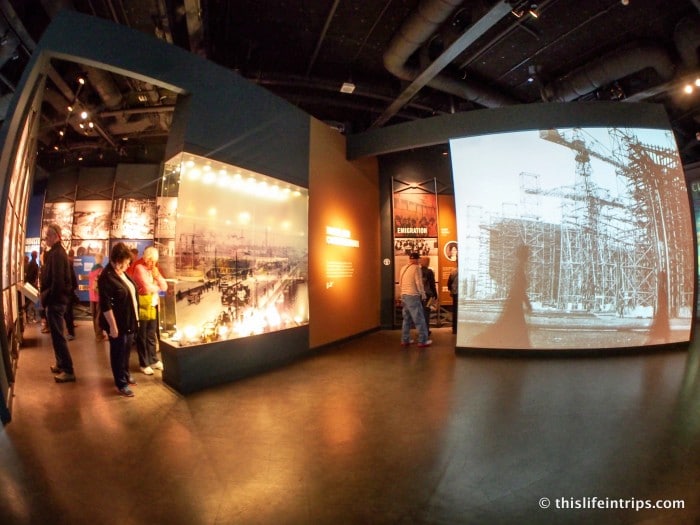 With the infrastructure in place, H&W begin building a totally new breed of ship, the RMS Olympic, RMS Britannic, and the Titanic. Not only were they billed as unsinkable, the Titanic was to be one of the most outlandish. The Titanic Belfast Museum takes visitors through the outfit of such a ship and includes first account stories and quotes of those that experienced it right up until the ships last breath.

Again, all of this from the very spot the ship was built and bid farewell from. 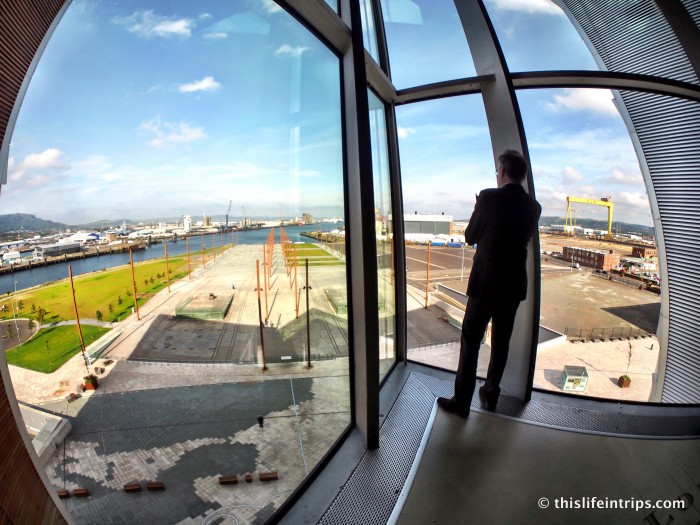 It (Really) Could Have Been Avoided

Like all tragedies, the sinking of the Titanic could’ve been avoided. Chilling accounts of Morse code transmissions between the Titanic and nearby ships that warned her of icebergs in the area line the halls in one chilling display. These warnings fell on deaf ears to the point of the captain replying with a “shut up.” Whoops. 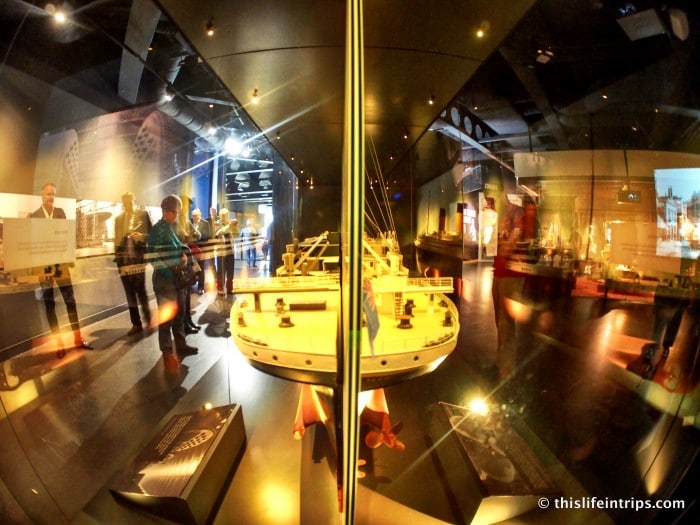 Next were the alarming stories from those on board as the ship sank. I was completely drawn in and reading every word as if the events were unfolding before my eyes.

After exhibits on the Titanic’s aftermath of court cases and Hollywood’s take, you are led into a theatre showing footage of the Titanic in its final resting place. The goose bump-giving scene is amplified after hearing the stories of those that were not only onboard, but those that built this city, the shipyard, and the boat itself. Then below the dive footage you will find interactive terminals that allow you to virtually man a submersible device and scour the wreckage site. There you will find items as the explorers did in 1986 when they discovered the ship.

I entered the Titanic Belfast Museum questioning why and left feeling this was answered and then some. At first, the Disney-like display and effects felt like they were dumbing down an already Hollywood dumbed down the story but as I strolled the halls I felt myself becoming more and more engaged. Afterward, I wandered the large dry dock where the Titanic was built and launched with not only an appreciation for those onboard but for the shipbuilding city and hard working folks that lived in it.

Never before has a museum done that.

What say you?
Thoughts on the Titanic Belfast Museum?
Let’s hear it! 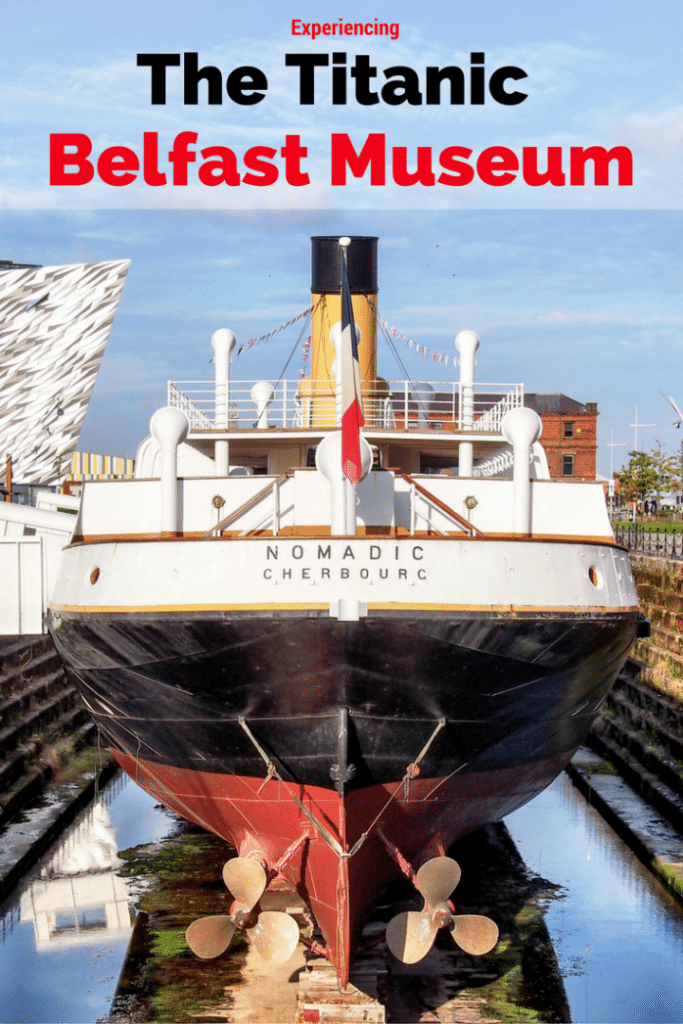 Although I was provided a complimentary tour of the Titanic Belfast Museum,
the experience, opinions, and enlightenment are my own.

So how does the Titanic Belfast Museum rank?