On with the Ladyboy Show!

Seeing a ladyboy show in Thailand definitely wasn’t on the to-do list. We avoided the many invitations to various sex shows in Bangkok  yet there I was, front row at the Moulin Rouge Cabaret in Cheweng…and loving every minute of it.

How I Ended Up at a Ladyboy Show

Robert, our host at the Best View Villa, suggested we head into Cheweng Beach on their courtesy shuttle for a night of entertainment. After a day of relaxing poolside we were ready for so fun so took him up on the offer.  We started with drinks on the beach in front of Arc Bar, arguably the area’s most popular beach club. We took in the sights and sounds around us while sipping fruity drinks.

After buying some mango’s from a vendor on the beach I spotted Robert and his family playing in the surf. We chatted for a bit and that is when he suggested we head over to the Moulin Rouge for a ladyboy show. I was a bit skeptical until he said he was probably going to end up there as well…kid in tow. All I could think is “What a country!” That and if this little guy was in then it really couldn’t be that bad: 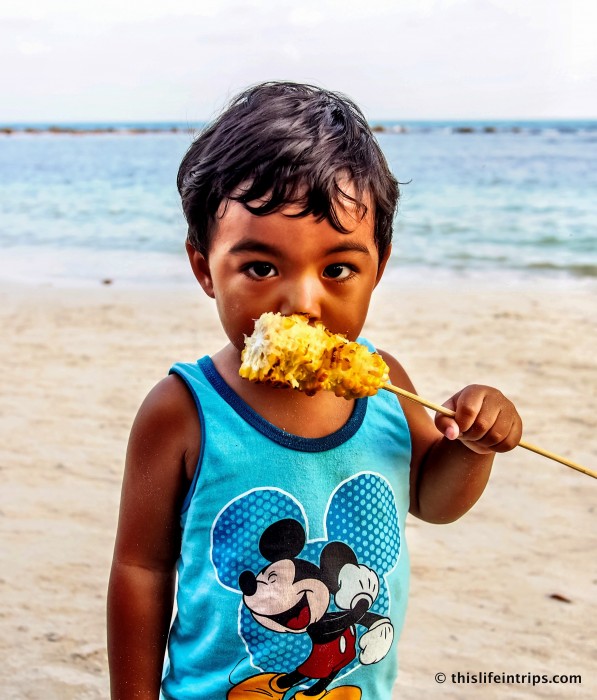 After settling our surprising cheap tab we stumbled up the road in search of the venue. When I asked Robert where it was he said that it could not be missed. He was so right. Once on the main drag (pun?) of Cheweng we spotted a group of “ladies” playfully luring people into the Moulin Rouge Cabaret, Koh Samui’s only “free” ladyboy show. Of course “free” means a drink minimum and that drink is highly overpriced. Still, a great value for an hour or so of entertainment unlike anywhere else. 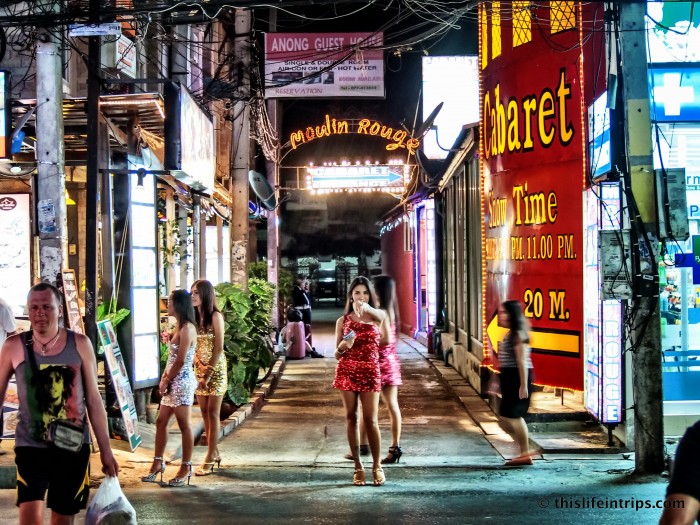 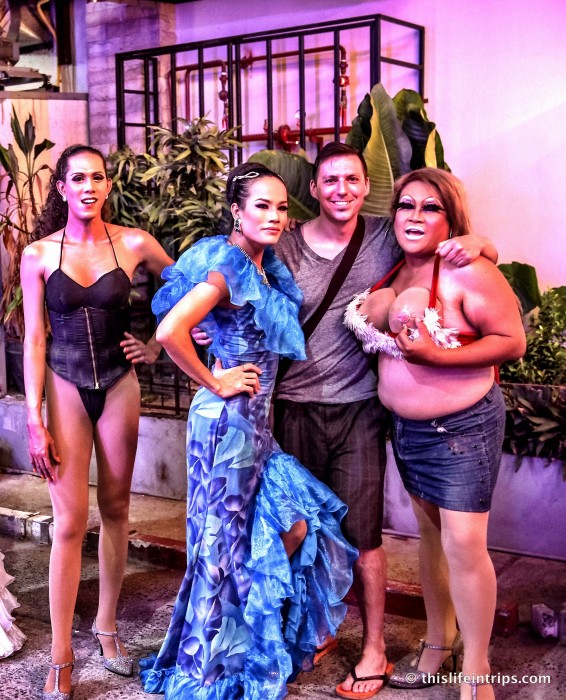 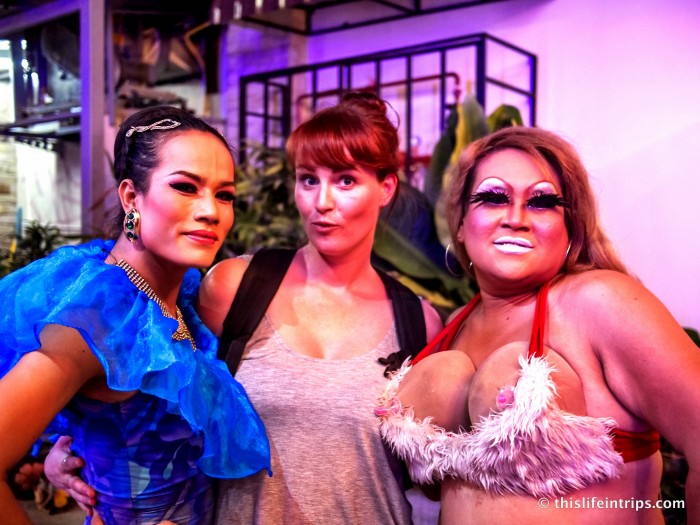 Hit me Baby One More Time

We were seated in the front by an attractive attendant with a protruding Adam’s apple while a dancer danced in impossibly high high-heels to Madonna’s Like a Virgin. The “girls” range from hilarious to questionable. Some dancers were just taking the piss out of the whole thing which was great. Others were so serious that you really questioned if they were indeed a dude. Full on fake breasts and a tuck job that would make Buffalo Bill envious.  There were multiple double takes that night where Erin and I really had to wonder what was going on. This Britney Spears impersonator  left us laughing and not guessing: 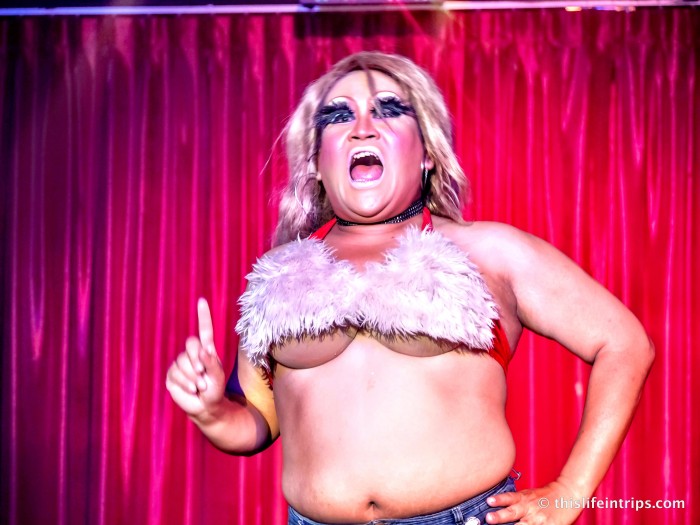 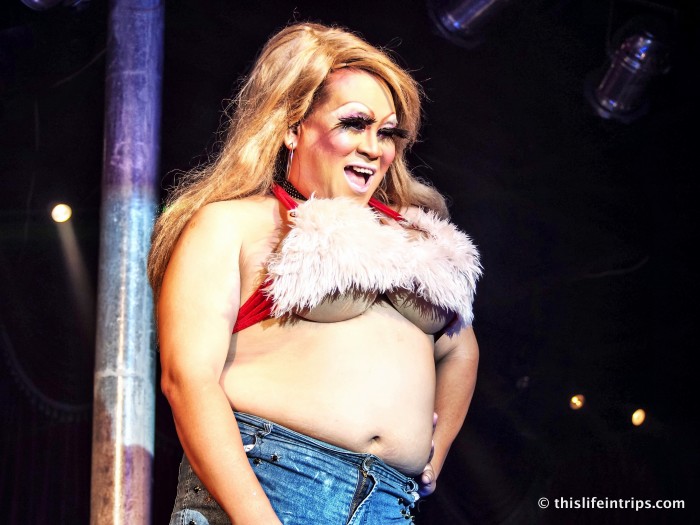 Beauty in Costume and Dance

Sitting front row I got my share of attention which was hilarious. Not since living on Davie Street, Vancouver’s Gaybourhood, have I garnered more attention. Sitting close also allowed me to get some interesting photos. The highlight of the night was without a doubt this two-faced dancer. I have seen this done on TV but never in person. It really was awe-inspiring and beautiful. It also provided me with some of my favorite pictures while in Thailand: 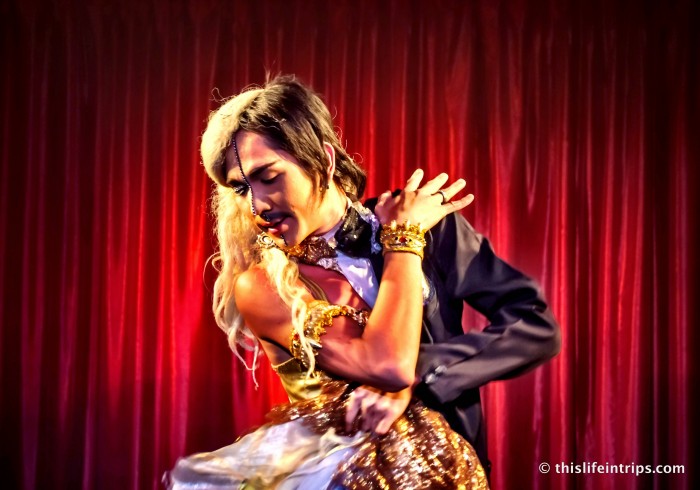 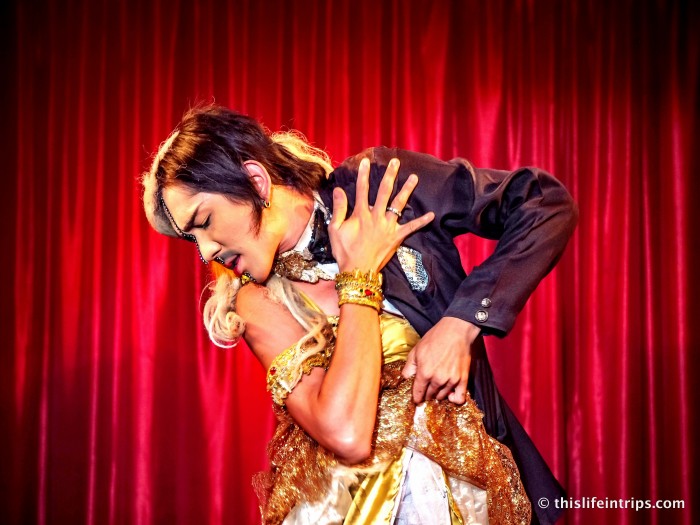 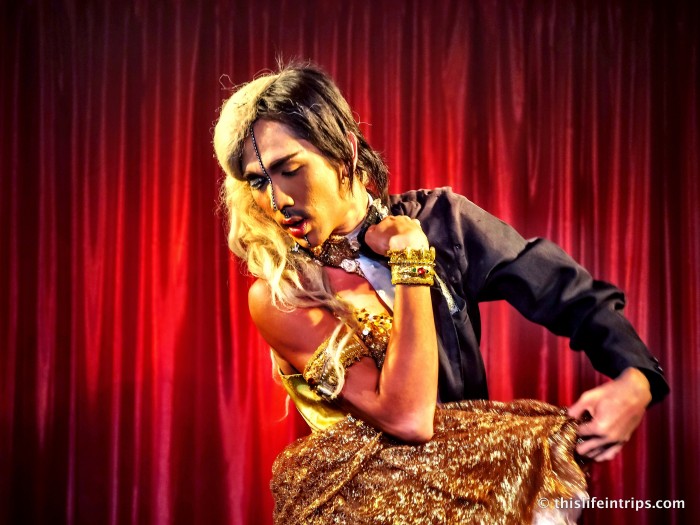 All in all a very entertaining and odd night at the Moulin Rouge and would even say it is a must do if in the area. This long-running ladyboy show is full of fun, beauty, and a certain type of amazement that can only be found in Thailand. Although it was harmless fun I have heard of people going backstage where things can get “handsy” so be warned…unless you are into that kind of thing. Robert did indeed show up, baby and all. This only proved that this show is a part of the islands culture and not just a tourist trap.