Are you searching for the best Thunder Bay restaurants and food? I ate my way from Neebing to Silver Islet and have highlighted my favourite eats and treats along the way!

At first glance, Thunder Bay does not come across as a foodie town. It’s undeniably rugged and industrial. Still, those that take the time to break through its rough exterior will be rewarded with some tasty gems.

On my three days in Thunder Bay, I did just that. Here’s my foodie guide and pick of Thunder Bay restaurants including where to eat breakfast, lunch, and dinner with plenty of sweets in between.

Compare prices on flights to Thunder Bay with Skyscanner

Thanks to the high concentration of Finnish settlers that populated Thunder Bay, these crepe-like pancakes can be found in plenty of eateries around town.

Closer to a crepe than a pancake, Finnish pancakes are simple but delicious. Really, any excuse to cover something with syrup and butter is OK with me. I tried Finnish pancakes at three spots in town, Java Hut, Niva’s, and Rooster’s Bistro. All though they all tasted pretty much the same, I will give Niva’s a nod for its homey restaurant feel and a variety of options. They also make maple tarts that are delicious and a perfect takeaway.

Fair warning, Niva’s is a popular breakfast spot and often qued up on weekends. If you are craving Finnish pancakes any time of the day or want to add it as a side to a variety of large portion meals, the Java Hut serves them sunrise to sundown.

Hoito, once run by the Finnish association, was the undisputed location for Finnish pancakes up until its closure in 2020. There is talk of it opening up again. Until then, you can get their premade Finnish Pancake mix online and at grocery shops around town. I took some away and made a batch for Christmas Day breakfast and they were a hit at home!

As the name suggests, St. Paul’s roasts its beans in house. The result is a fresh brew and a great cup of coffee. They serve up a variety of drip, pour-over, and espresso drinks in the heart of downtown Thunder Bay. I had a flat white and was easily the best coffee I had along Lake Superiors north shores. It was also a good pick me up after a mountain of Finnish pancakes.

On top of a location that has a great patio and features live music, Nomad makes an amazing sandwich. Everything from the bread to the cheese and meats are sourced locally and served up fresh. They also stock plenty of great local treats like Thunder Oak Cheese and Prime Gelato by the pint. They also claim to be Thunder Bay’s only crêperie and serve up sweet and savoury crepes and Finnish pancakes.

I had the Recharge sandwich (Smoked Turkey, Dill Gouda, Parsley Pesto, Aioli, Pickled Red Onion, Cucumber, Spinach on a hearty Powerloaf bread) and took it to go for my hike in Sleeping Giant Provincial Park. Oh so good!

I also had a breakfast sandwich which was honestly one of the best I’ve had in recent memory so a good option for breakfast on the go.

If you like deep-fried everything, and I mean everything, the Red Lion Smokehouse is for you. This barbeque spot is located right downtown and has a great patio. It also has the best beer list in the city with brews from Thunder Bay, Ontario, and beyond on tap.

The menu is largely Southern Comfort with a whack of deep-fried goodies like cheese curds, olives, and buttermilk wings available in a slew of flavours. I had ( and highly recommend) the deep-fried banana peppers. They are covered in local Heartbeat hot sauce (a favourite on Hot Ones!) and come with a great side mayo dip to cool it all down.

For my main, I had the oyster sauce marinated flank steak which was fantastic. There is a slew of side options however don’t sleep on their mac & cheese. I also had (on a separate visit) the ribs and they were fall off the bone good. Hell of a deal at half-price on Mondays!

If finger-licking ribs aren’t your thing or if you’re looking to have a nice night out in Thunder Bay, Bight Restaurant + Bar is for you. Located in the rejuvenated Prince Arthur’s Landing, Bight is modern and classy yet laid back enough to let this solo traveller in.

I enjoyed their Lake Superior trout and chips with a Dawson Trail IPA. 👌

The menu is much more sophisticated than what I was feeling that night and includes Tuna Niçoise, Beef Tartare, and a Burrata Plate that passed by my table and looked really good. The cocktail menu is also extensive and worth a sample.

Where Thunder Bay food really shines is in its sweets and treats. Over my three days exploring the city I sampled plenty of great snacks and took plenty away for my long drive home.

Food-wise, next to Finnish pancakes Thunder Bay is probably best known for the Persian. This cinnamon roll-like pastry is slathered with pink frosting and is a local favourite.

The story of the Persian dates back to the 1940s when an American general named Jack Pershing met local baker Art Bennett. Art had just created the sweet treat and decided to name it after his new American friend.

Since then, the Persian has become a locally loved treat. It can be found at the Persian Man Bakery (two locations in town) and at local grocery stores.

Speaking of pastries that somewhat resemble a cinnamon roll, the Silver Islet General Store cinnamon buns are not to be missed.

Really, the story of the 150+-year-old General Store and its owners are more than enough to draw you in. The cinnamon buns are just the icing on the cake… or cinnamon bun…or lack thereof. Let me explain.

What makes these cinnamon buns so good and unique is that they have no icing and are not sticky. Instead, they are dry and cinnamony sweet. They taste more like a sweet biscuit and are extremely popular, often selling out shortly after opening the doors. Be sure to pair with a coffee and take in the views of the lake.

When an owner goes to Italy to learn how to make gelato, you know you’re in for a treat. That is exactly what Prime Gelato owner Anne-Marie Calonego did. The result is authentic gelato to the delight of Thunder Bayers. It truly is a beautiful mix of Italy` and Canada in a cup or cone. Try the Salted Maple Caramel and tell me I’m wrong.

Although Thunder Oak Cheese is known around town for its Gouda, it’s the cheese curds that caught my attention. More specifically, the garlic cheese curds.

I made the 24 km drive to Neebing only to find that these flavoured curds were sold out. The cashier was kind enough to tip me off to a local grocery store that got a recent shipment. Sure enough, after a five-minute drive around the corner, I was able to get my garlic cheese curd on. Worth the effort, 100%

Thunder bay is actually home to five craft breweries; Lakehead Beer Company, One Time Brew Co, Sleeping Giant Brewing Co, and Dawson Trail Craft Brewery. On my three days in Thunder Bay, I checked out the latter two. Sleeping Giant won me over with its great outdoor patio and pop-up food truck space. They also have a free EV charger which I took advantage of while having a pint.

Dawson Trail, in my opinion, had better beer. I personally like their Bae’s Haze IPA and their Plinth Pilsner. The outdoor space is limited to a parking lot patio although I had heard they are moving to the new Eaton Market so I will have to return to check that out.

Conclusion – Thunder Bay is a Fun Foodie Town to Discover

One thing is for certain, I left Thunder Bay wanting more. Thanks to all the Persians and Finnish pancakes, I left a little heavier too. At least there are plenty of outdoor activities to work off all the great eats and treats!

From Lake Superior Trout to local cheese curds, the Thunder Bay restaurants and food scene took me by surprise. So much so that I only found out after my visit there’s actually a food tour in town now! Guess I will have to return and check out what I missed!

What say you?
Thoughts on this Guide to Thunder Bay Restaurants, Food, & Drink?
Let’s hear it in the comments below! 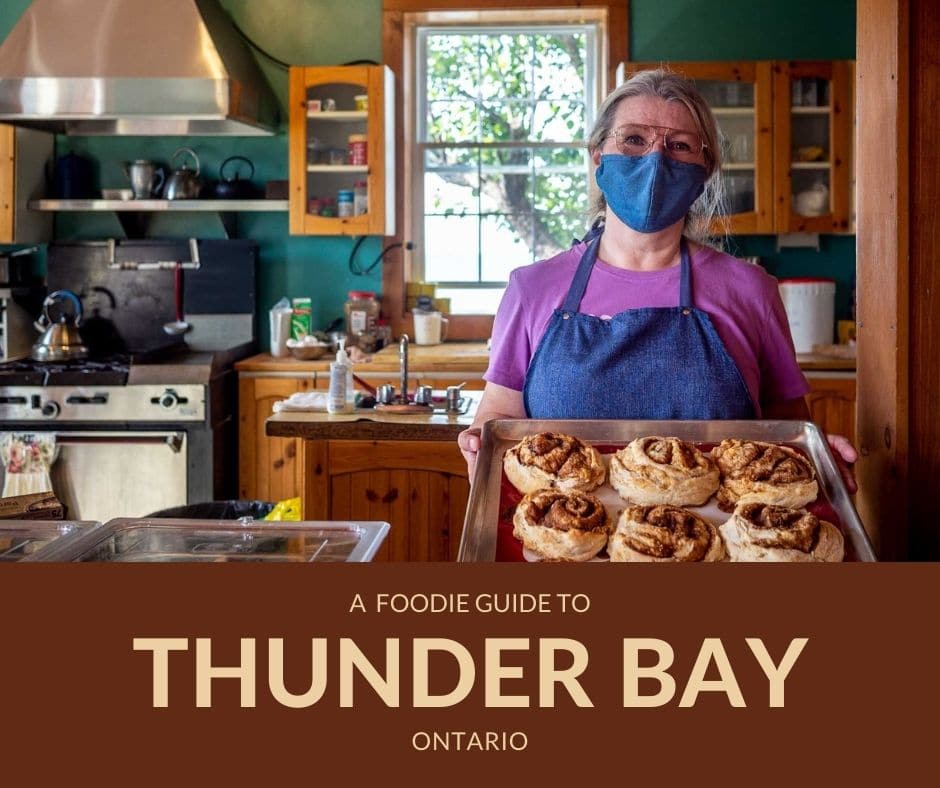 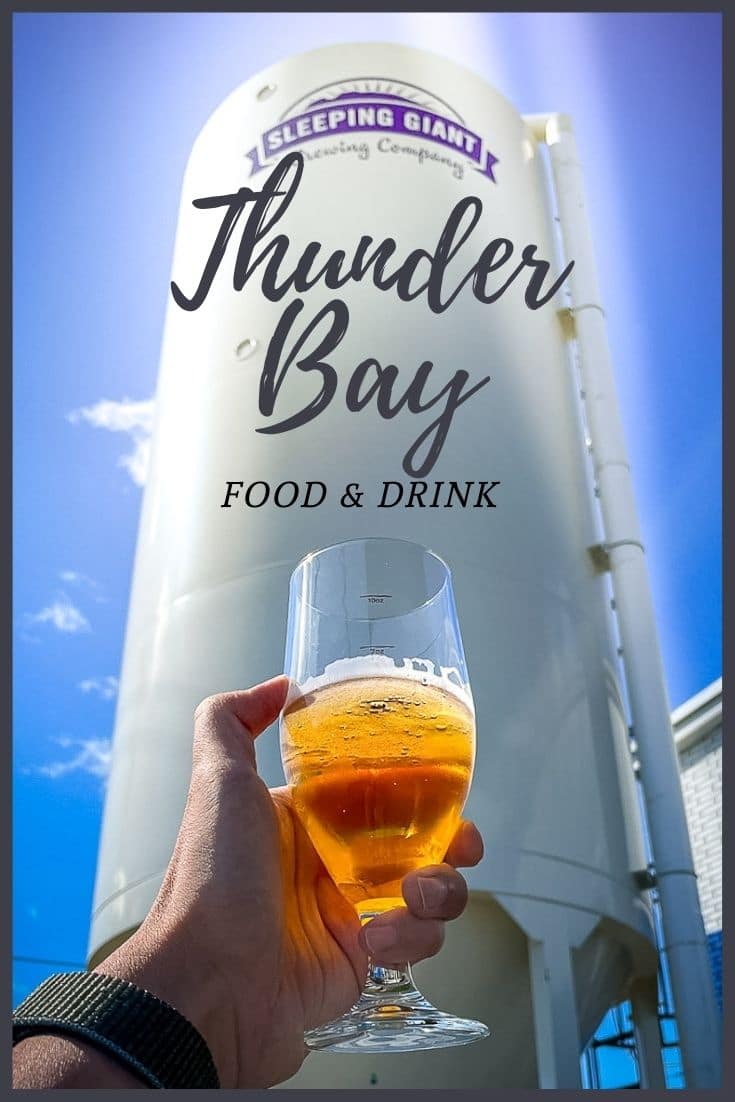 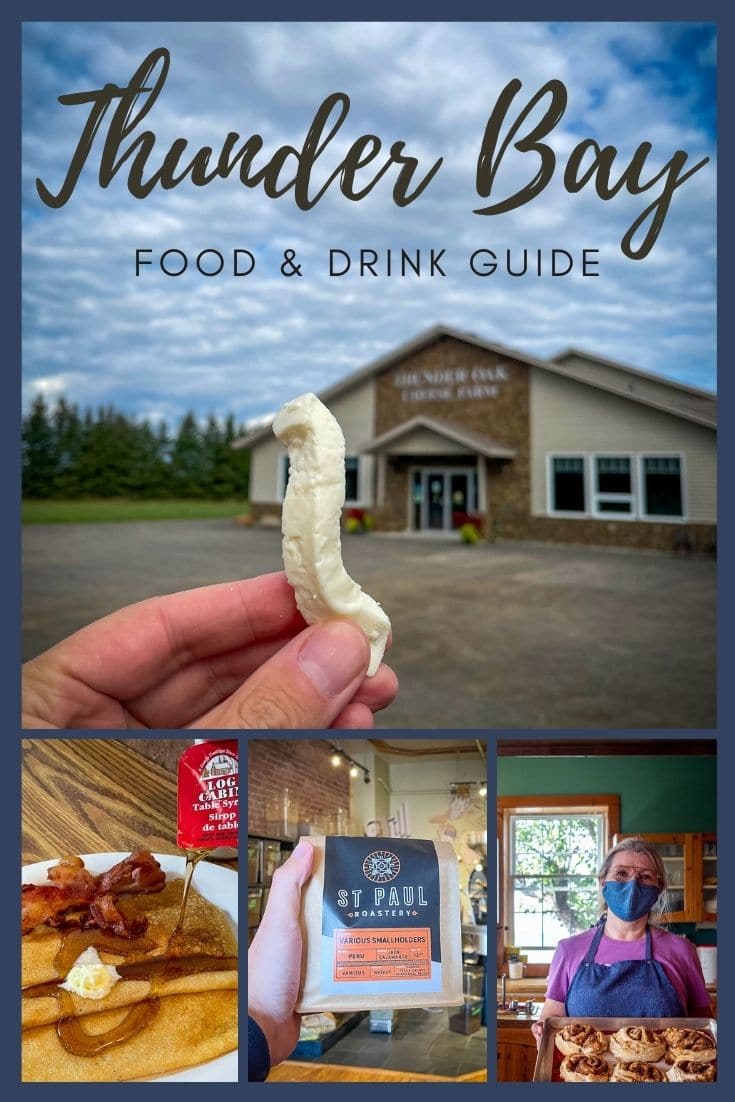 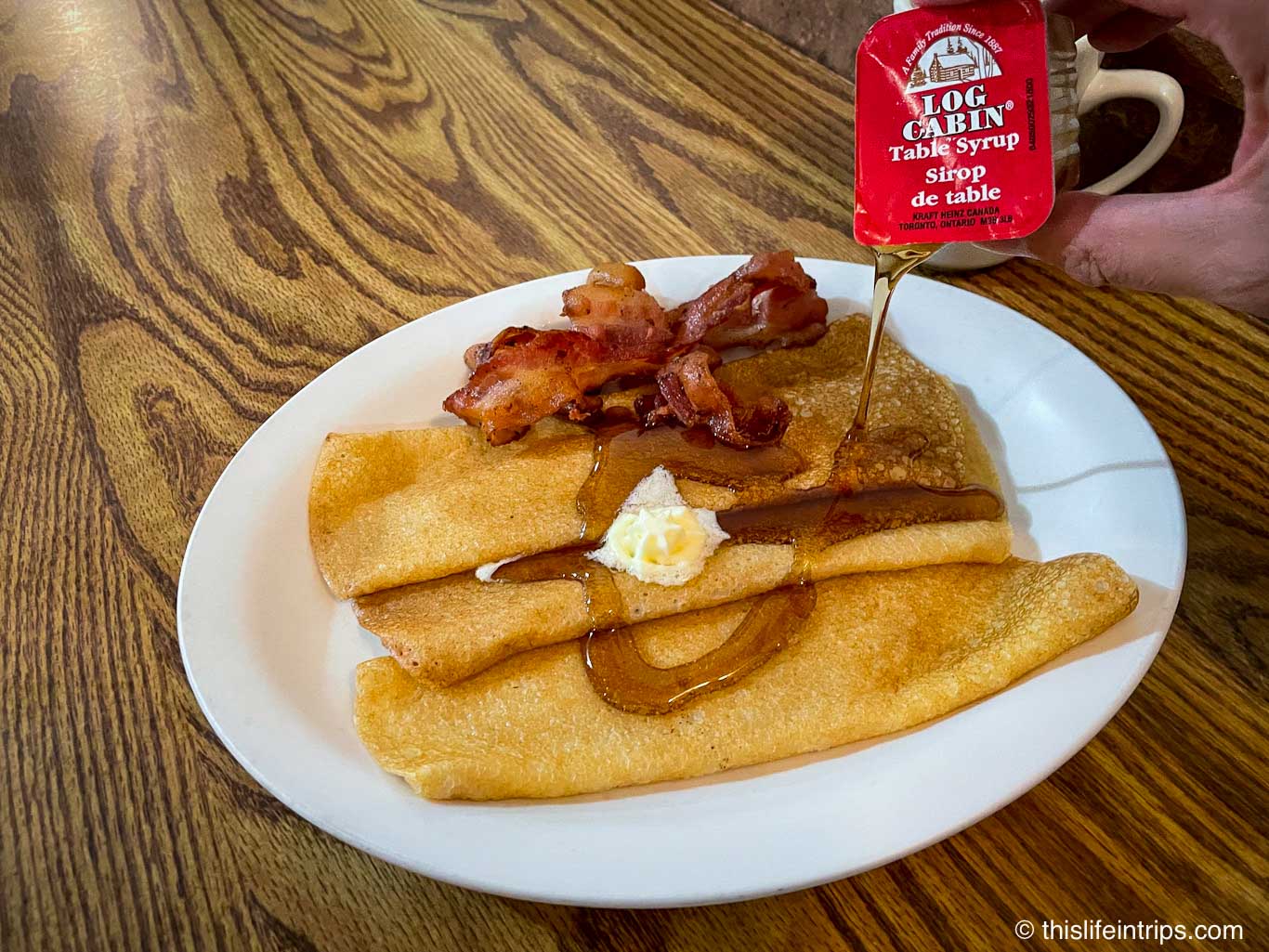 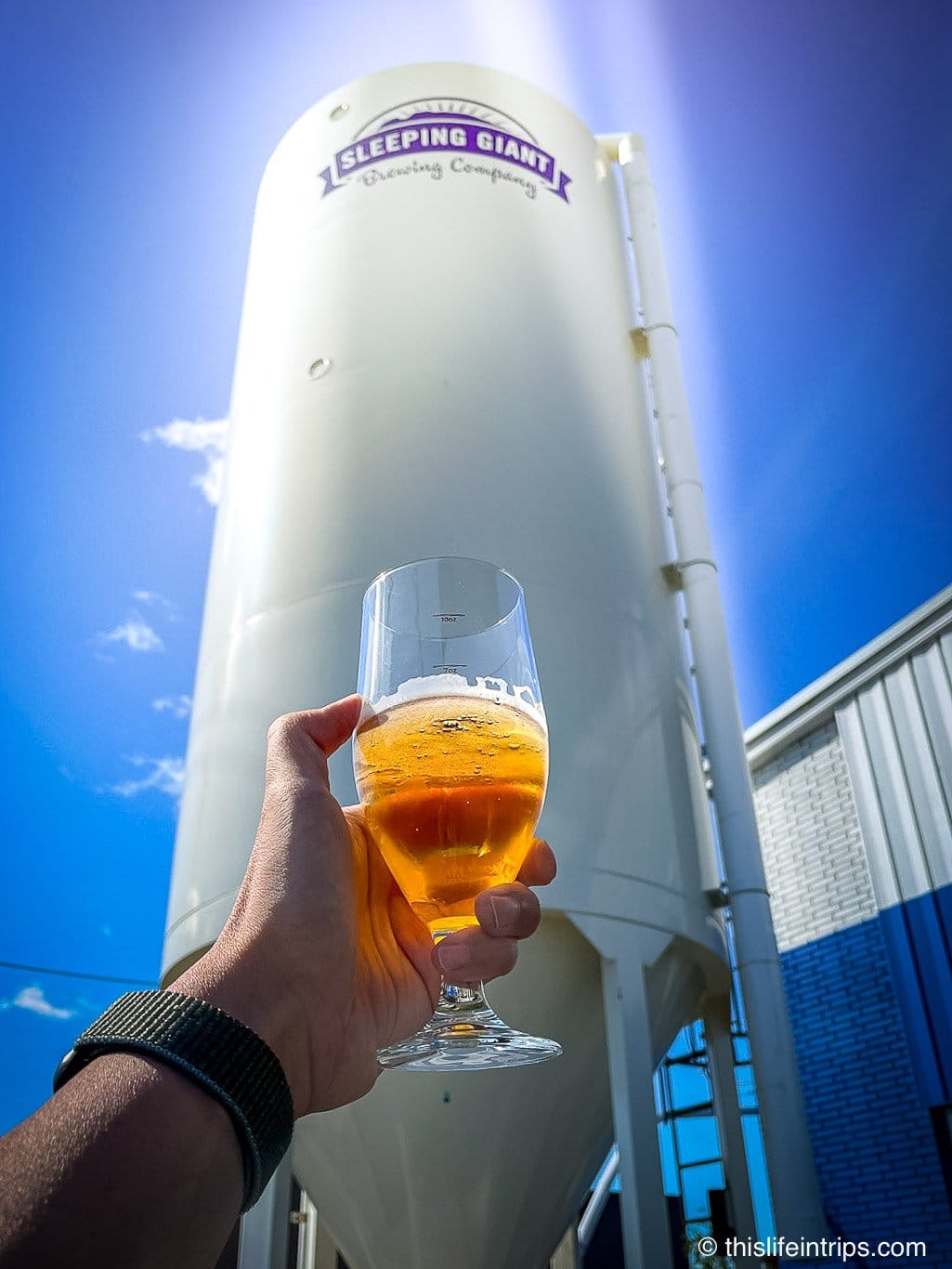 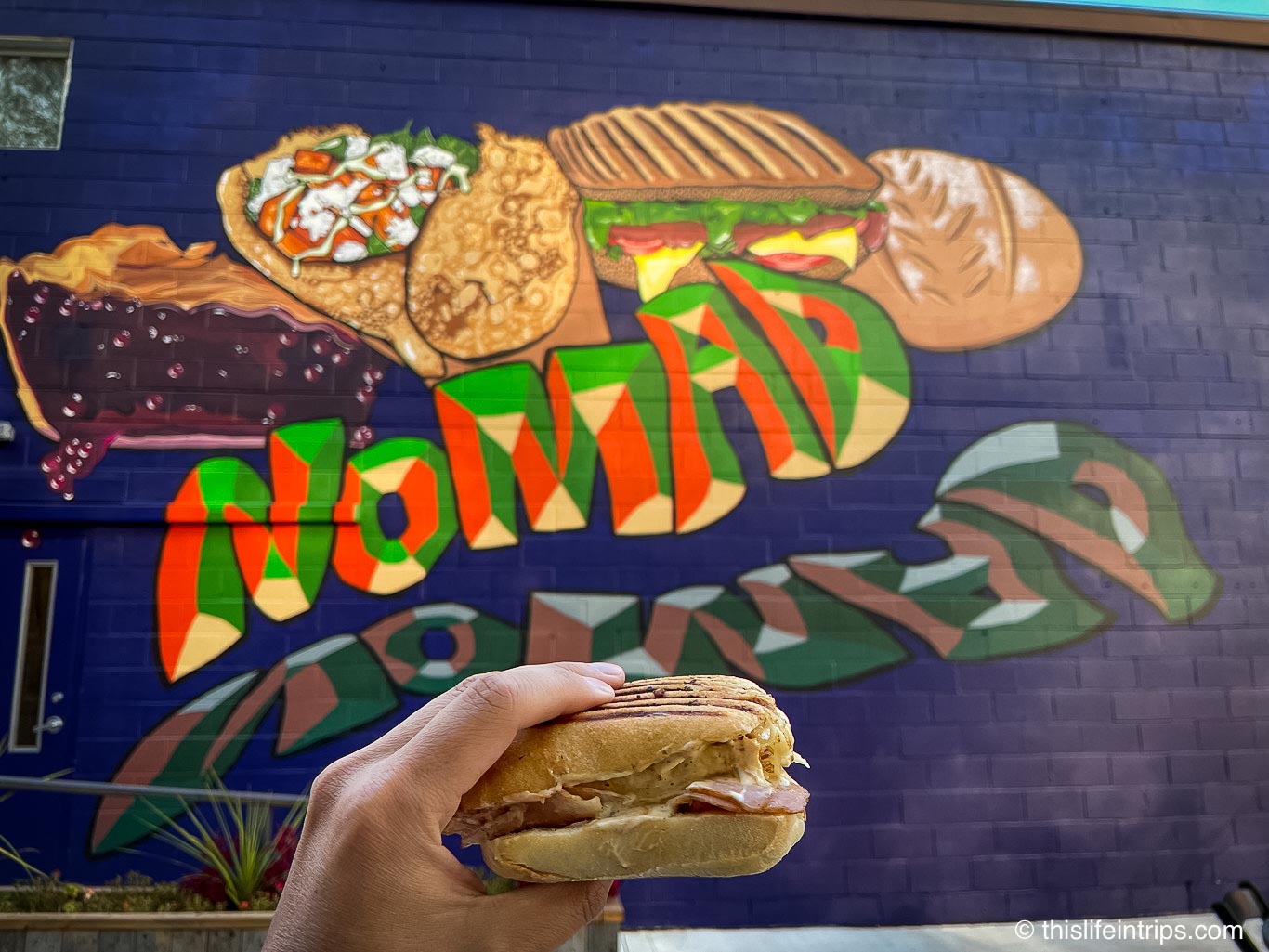 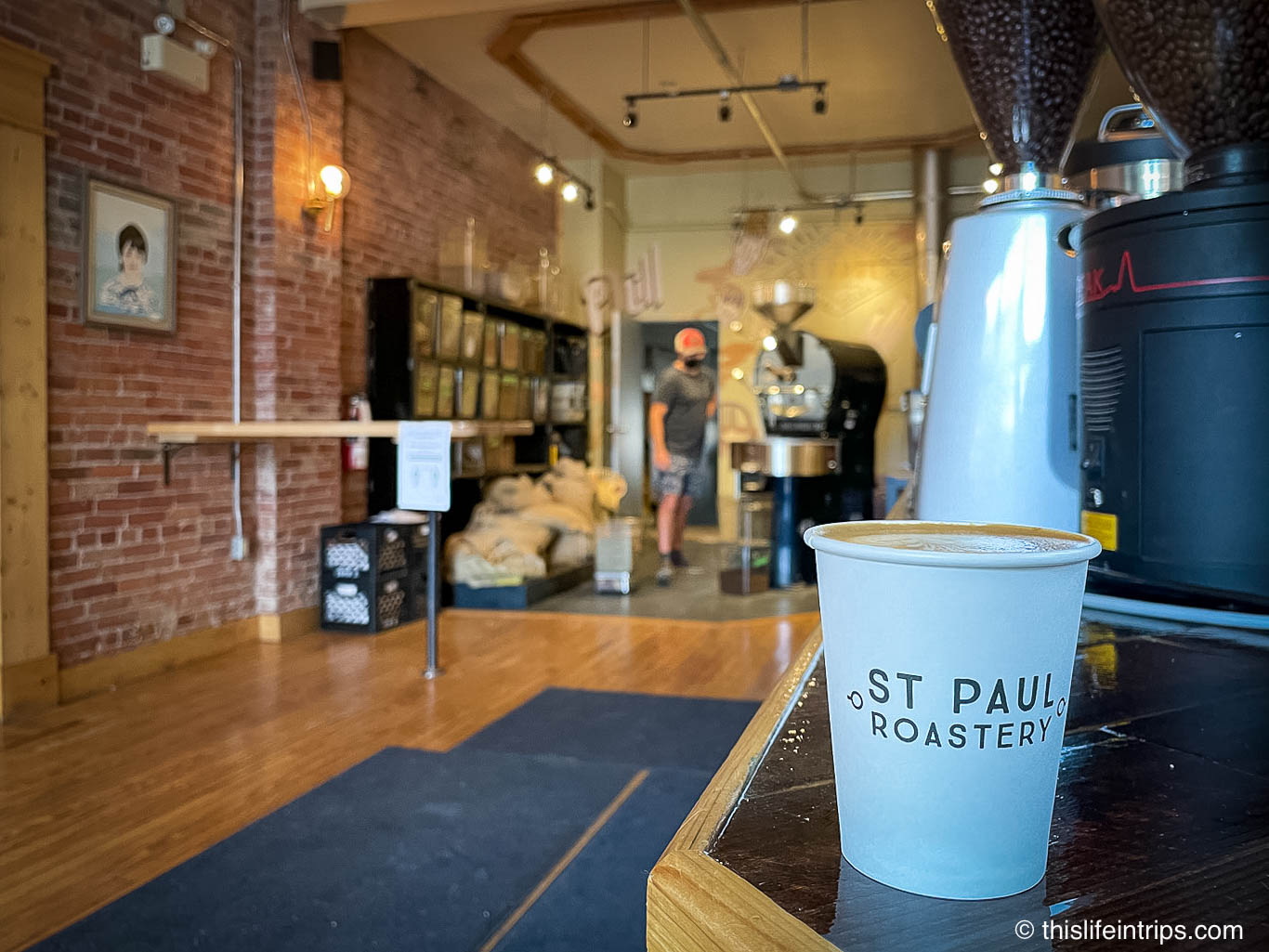