What’s it like inside a Tim Hortons in Oman? I head to Muscat to find out.

I am one to try out local food and flavours when I travel. Aside from being one of the best ways to appreciate different cultures, eating fresh and local is always better than packaged and premade. Because of this, I’m also one who turns up thier nose at those that go to McDonald’s or other chain restaurants while visiting a new country.

So why would a food snob like me visit a Tim Hortons in Oman? In short, loneliness.

A Touch of Home

I’d been travelling solo for a couple of weeks and, although having an incredible time, was feeling a bit lonely and a touch homesick. I’m not sure if it was the fact that I am older now or if being stuck at home during the pandemic made me a homebody. Either way, it was a new feeling for me while travelling alone. It didn’t help that I was visiting Oman during Ramadan when much of the country was eerily quiet.

It was also ridiculously hot outside which oddly made me feel trapped in my hotel. I spent the better part of two days poolside, something I also never do.

While looking for somewhere to eat I came across Tim Hortons in a mall close to my hotel. This made me smile and, given my recent mood, I decided to harness that feeling.

Tim Hortons in the Middle East

Now, this Tim Hortons in Oman isn’t an anomaly. At the time of writing this, there are over 5,900 locations worldwide. 216 of them are in the Middle East.

It’s also not the first one I have come across in the region. Back in 2014 while trying to make sense of Dubai’s mall culture, I spotted one in the Dubai Mall. The difference this time is I’m actually going into the Tim Hortons in Oman.

So why so many in the Middle East? If I had to guess I would say the region’s obsession with western shops and culture paired with the fact that not a lot of people drink alcohol in Islamic nations. As such, you will find less bars and more cafés serving coffee, tea, and shisha. This was very evident to me while visiting Baku, Azerbaijan. I stayed at the incredible Merchant Hotel which backed onto a very popular pedestrian street full of shops and restaurants. Every second store seemingly was a café or coffee shop.

So, with a goal of curing my homesickness with sugar and caffeine, I left my hotel for the 15-minute walk. This Tim Hortons in Oman is located in the City Centre Mall. It was +35° out at 7:30 PM and, somehow, the temperature was 36° by the time I got to the mall. The blasting AC was a welcome relief and actually gave me a chill within minutes of stepping inside. I didn’t think I would be ordering a hot drink but there you go.

The first thing I noticed when stepping inside was the interesting drinks and eats on promotion. Pretty much pistachio and baklava flavoured everything. The other thing I noticed was just how clean the place was. Everything in the mall is pristine though so I really think this level of cleanliness is due to the high standards in Middle Eastern countries overall.

I am a sucker for all things pistachio so decided on a pistachio latte and pistachio doughnut. The latte was scalding hot and took several minutes to cool down. It was also very, very sweet. It was good though but, again, I like pistachio anything. I would later try the pictacio Iced Capp and, although also very sweet, a little more expected.

The pistachio doughnut, not so much. It was essentially a Boston cream with a green pistachio frosting on top. Also overally sweet.

Even though there is a Middle East touch to the place, it is, still, a Tim Hortons. The uniforms, Iced Capp machines, and displays are all very much the same as those found back home. There’s also staple menu items like Tim Bits and maple doughnuts. Oh, and a maple leaf on the cups which made me smile.

It’s funny how something small like a maple leaf on a mug can give you a sense of home but that’s exactly what this Tim Hortons in Oman did for me. Even though going to a chain restaurant is not something I normally do while travelling, I get why some people do. The familiarity and sense of home brought a little bit of comfort in a time when I needed it the most. And again, sugar and caffeine certainly helps!

What say you?
Thoughts on Visiting a Tim Hortons in Oman?
Let’s hear it! 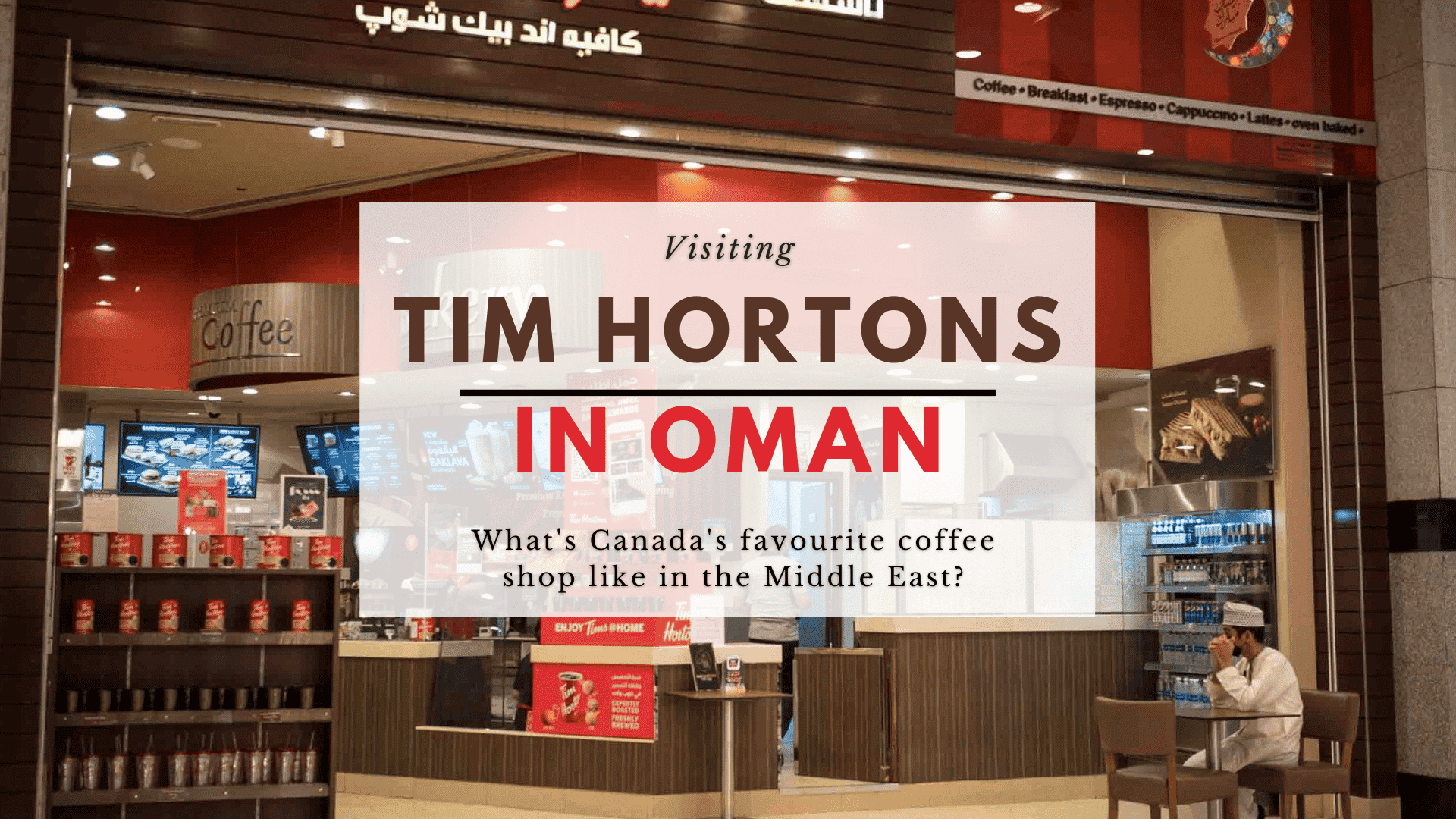 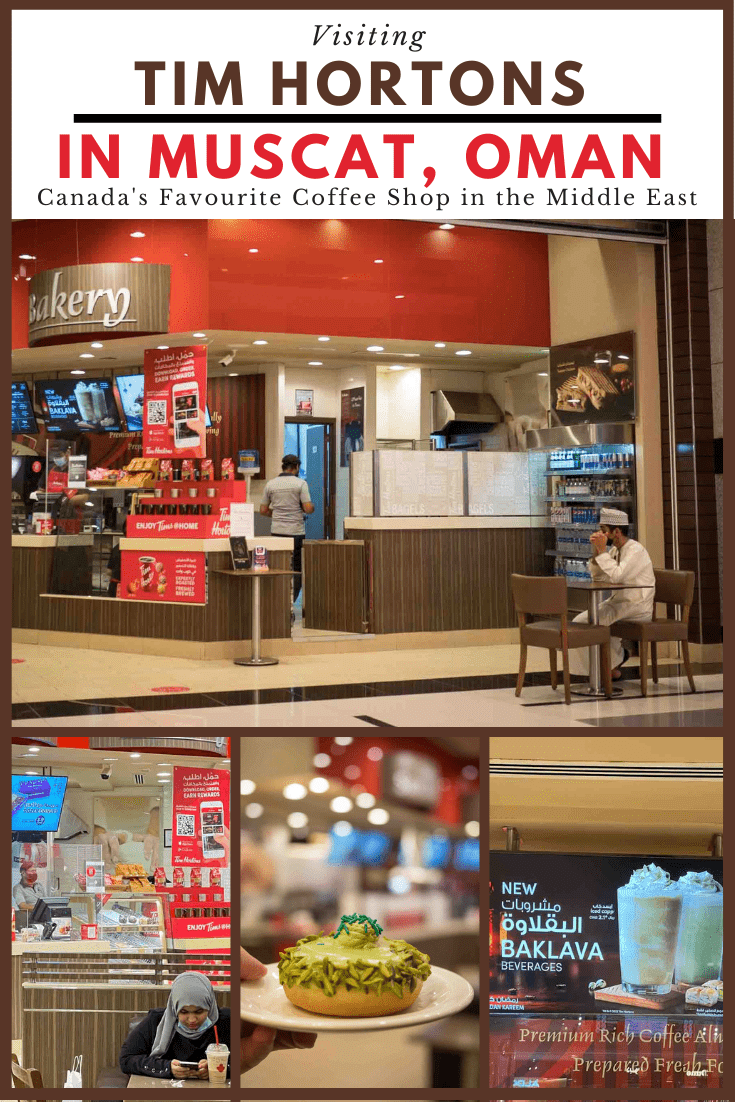 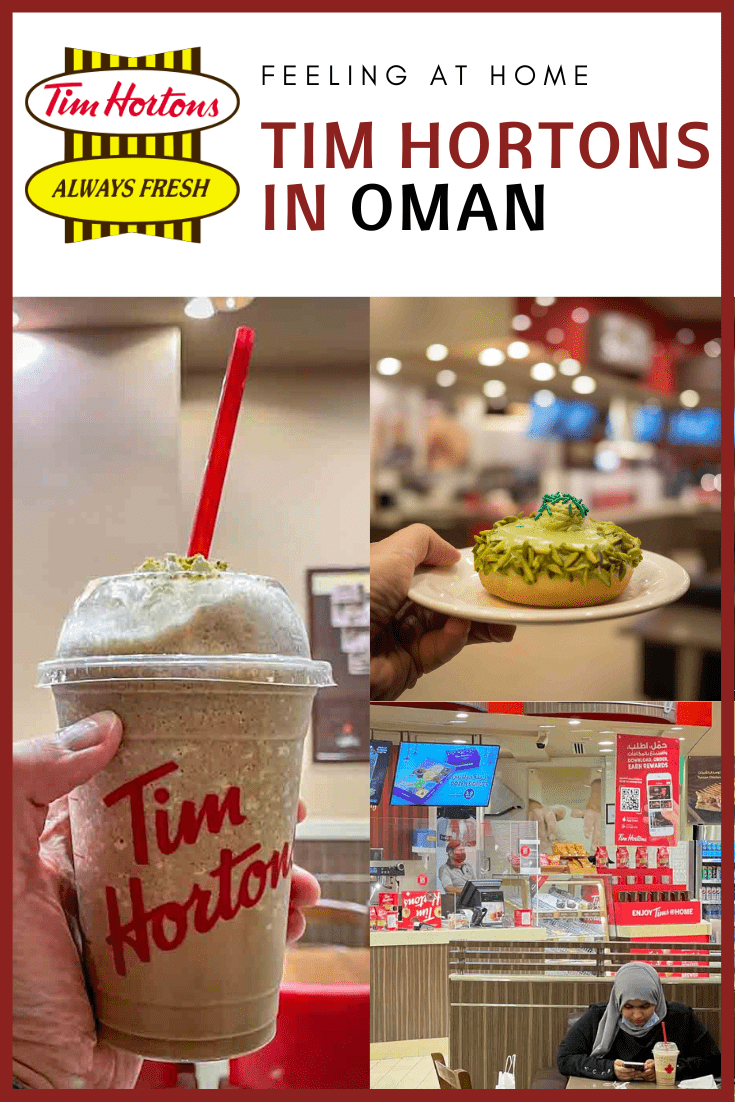 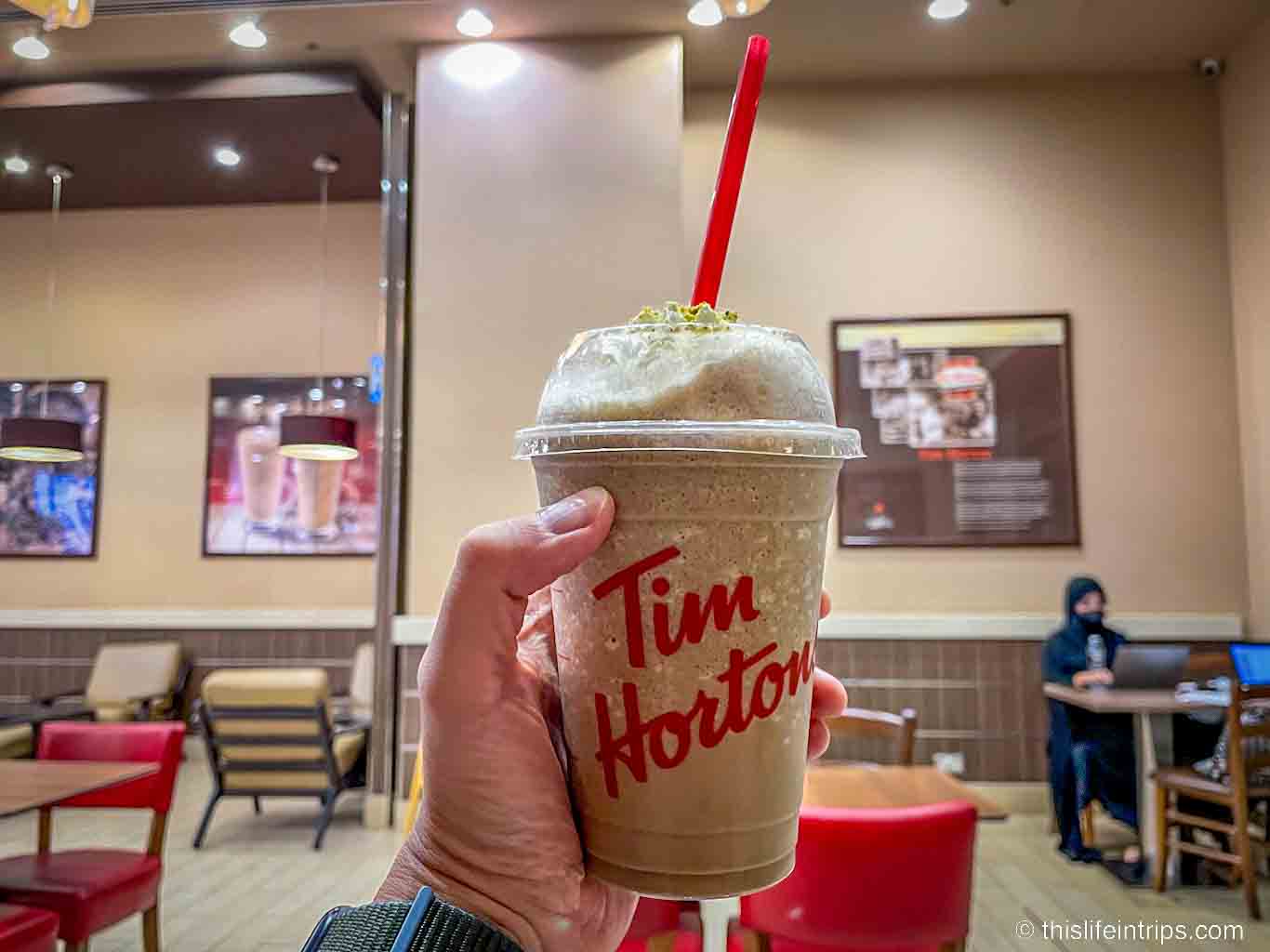 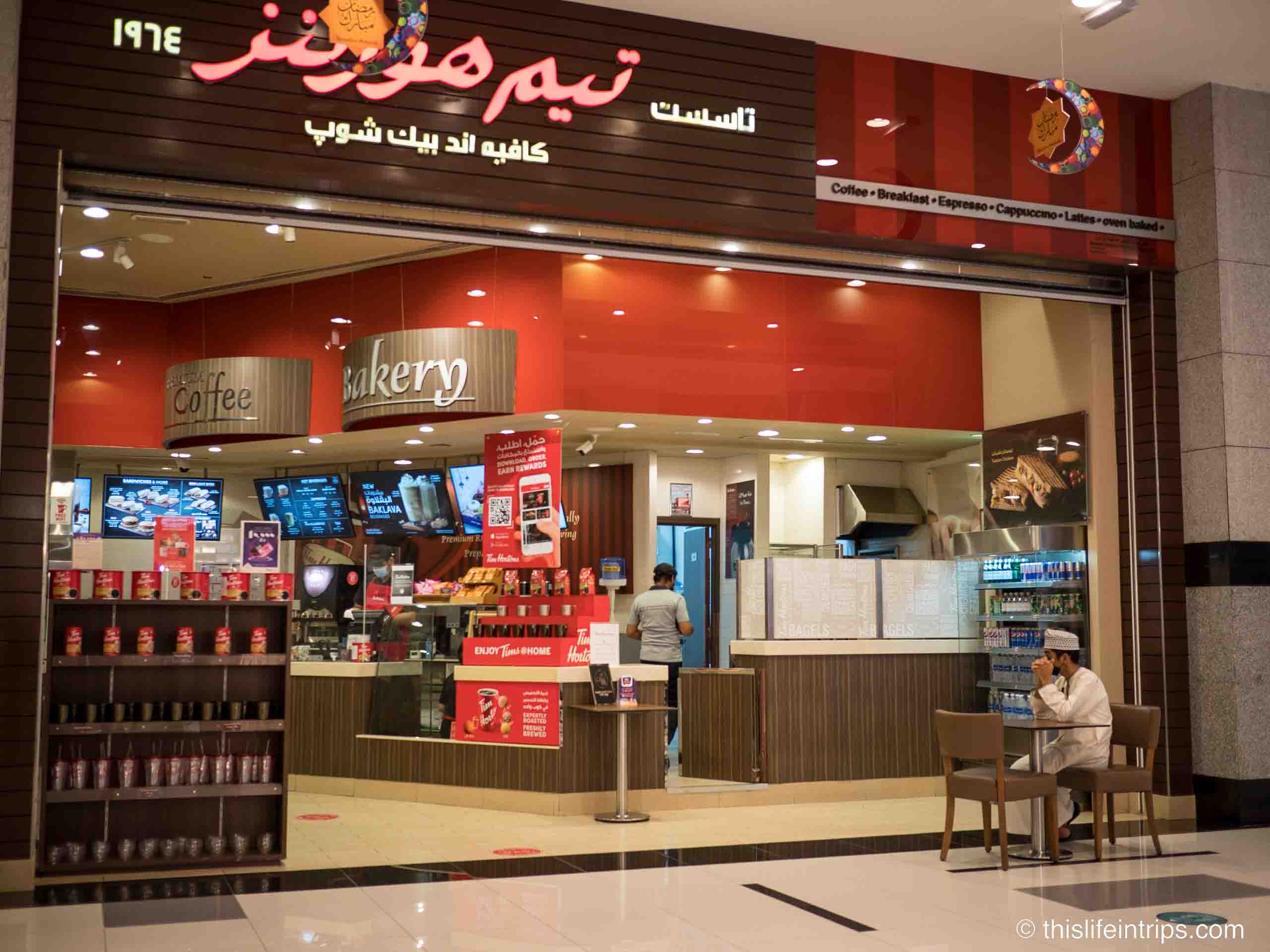