Going to Saskatchewan Roughriders game at Mosaic Stadium has long been on my Canadian bucket list. This past fall I happily ticked it off. With far and away the most passionate fans in the league and a stadium experience that can rival those south of the border, it was an absolute blast. With that in mind, here are my tips and takeaway from going to a Saskatchewan Roughriders game in Regina.

Why Should You Go to a Roughriders Game in Regina?

Regina, and the whole province of Saskatchewan for that matter, bleeds Roughrider green. I arrived in town three days before kick-off and pretty much everyone I met was wearing a jersey, jacket, or some other fan gear. As a game day grew near, things only got greener.

Compare prices on flights to Regina with Skyscanner

To say Roughrider fans are the most dedicated in the Canadian Football League is a gross understatement. If you have been to a CFL game in any other city, you probably know what I mean by this. Rider fans come out in droves and with a league of just eight teams, I wouldn’t be surprised Saskatchewan fans accounted for half the leagues profits.

This passion and energy alone is reason to go to a Roughriders game in Regina, football fan or not.

Where Do the Roughriders Play?

The Saskatchewan Roughriders play in the province’s capital of Regina. Their home field is the 2017 completed Mosaic Stadium. It is located just west of downtown and is a 20-minute walk from the Cornwall Centre Mall.

Parking is only available to those that have purchased season parking passes so it’s best to walk or take a free shuttle on game day. Several city and game day buses are available with pick up locations around town. For full details on bus schedules, check out Regina’s official website.

Where Can I Buy Roughriders Tickets?

Saskatchewan Roughrider tickets are available online through Riderville and Ticketmaster . Tickets typically range from $50 to $120 per however you can often find better value through second seller sites like StubHub.

For my visit, since I was more interested in the fan experience than the game itself, I settled in Pill Country. This fan favorite zone is general admission and the cheapest seats in the house. It is for those looking to enjoy a drink or two and take in the full experience of Riders Nation. We paid just over $30 per ticket and used that to get in and explore the stadium.

Before getting to the game itself, let’s talk about pregaming in Regina. I had heard that the Roughriders stadium was one of the only places in the league where tailgating is allowed. This wasn’t the case on my visit due to Covid.

No matter, there are plenty of great pregaming options in and around town. We started our afternoon with Regina Style Pizza at Houston Pizza before heading to Rebellion Brewing for a couple of pints. From there it is a short walk across the street to Baller’s Rec Room. There you will find plenty of video games, drink specials, and activities to try out. There’s a batting cage and a full on Mario Kart game that I have only seen in Japan. There’s also a Riders shuttle bus stop out front which makes it a great spot to pre and post game.

We opted to walk however I can appreciate the number of shuttles available as they are likely well used as the temperatures drop.

From Baller’s we made our way to Pile of Bones Brewing which is just a couple blocks from the stadium. It has a great patio and, as we found, is earshot of the fireworks and cheers of the stadium.

You could feel the energy of Mosaic stadium blocks away. Once inside and with a cold Pilsner in hand, We took in the experience from various seats around the stadium. I’m assuming due to Covid that seats were not full however I was told that seating was not restricted. None-the-lees, this allowed us to take in many angles of the game all with the cheapest ticket in town. I suggest you try this if you are visiting to check out the stadium and experience more than the actual game itself.

Of course, there is no shortage of Old style Pilsner available on tap at Mosaic Stadium. That said, there are plenty of other great options including a Wiser’s Whiskey stand and a spiked coffee stall, perfect I’m sure for those cold Saskatchewan nights…or afternoons.

The food offering at Roughriders games is plentiful. Walking around the stadium I found the usual stadium grub like hotdogs, hamburgers, and popcorn. On top of that, there are plenty of unique options. Everything from sushi and souvlaki to pirogies can be found and enjoyed at Mosaic Stadium.

As tempting as raw fish in the middle of the Prairies sounds, I wisely opted for a dirty dog which is a hotdog smothered in cheese, bacon, and fried onions. The pirogies were definitely a fan favourite as I saw many green jerseys tucking into them.

Would I Go to Another Roughriders Game?

Although the football game itself was just OK (Riders won easily 30 to 16), I had a blast. This experience truly is as close as you will find to an NFL game. I would 100% return in a heartbeat. I really wish other CFL teams could put a product on the field like the Roughriders do. With just four championships in over 110 years, clearly, ownership is doing something right to draw fans in…that or because it’s the only ticket in town. Either way, go Riders!

What say you?
Thoughts on Going to a Saskatchewan Roughriders Game?
Let’s hear it! 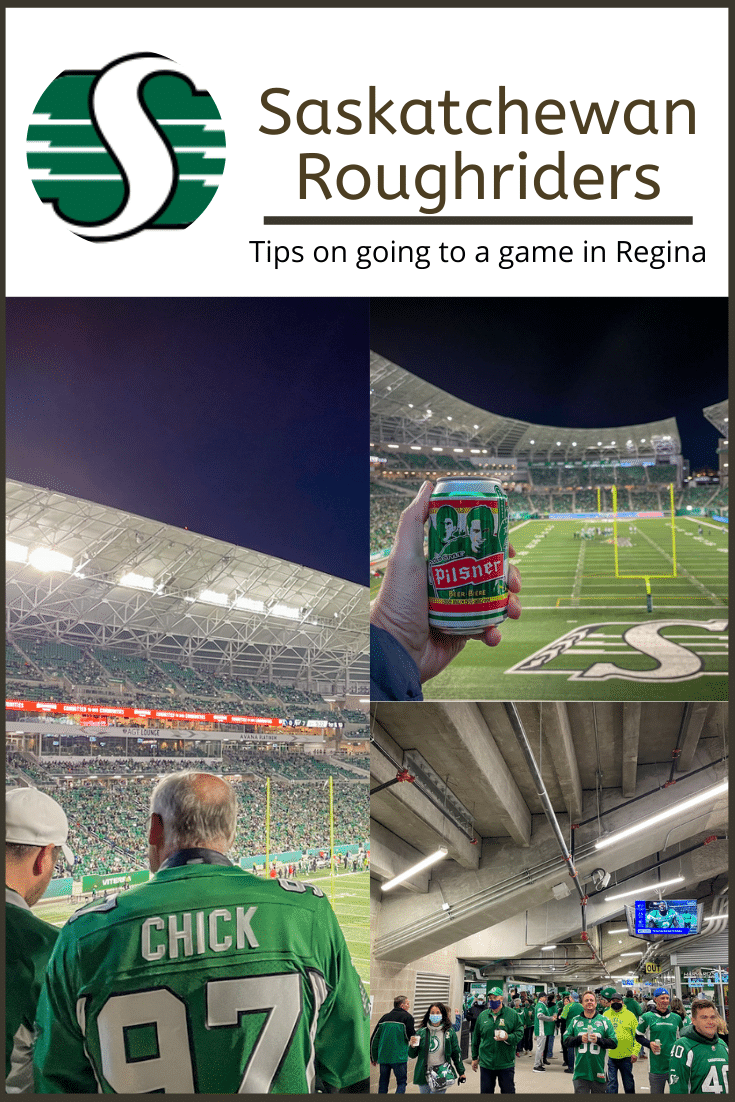 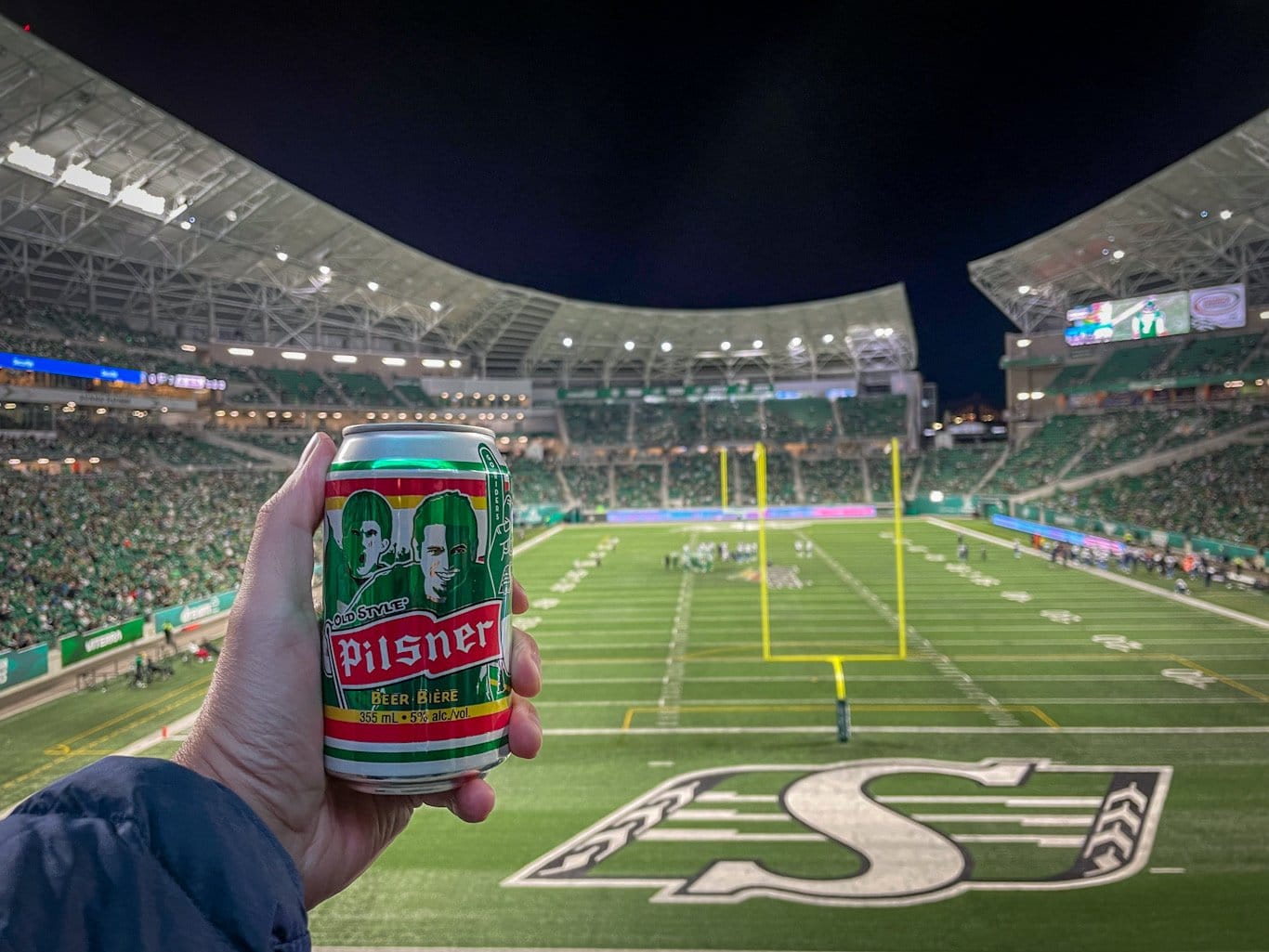 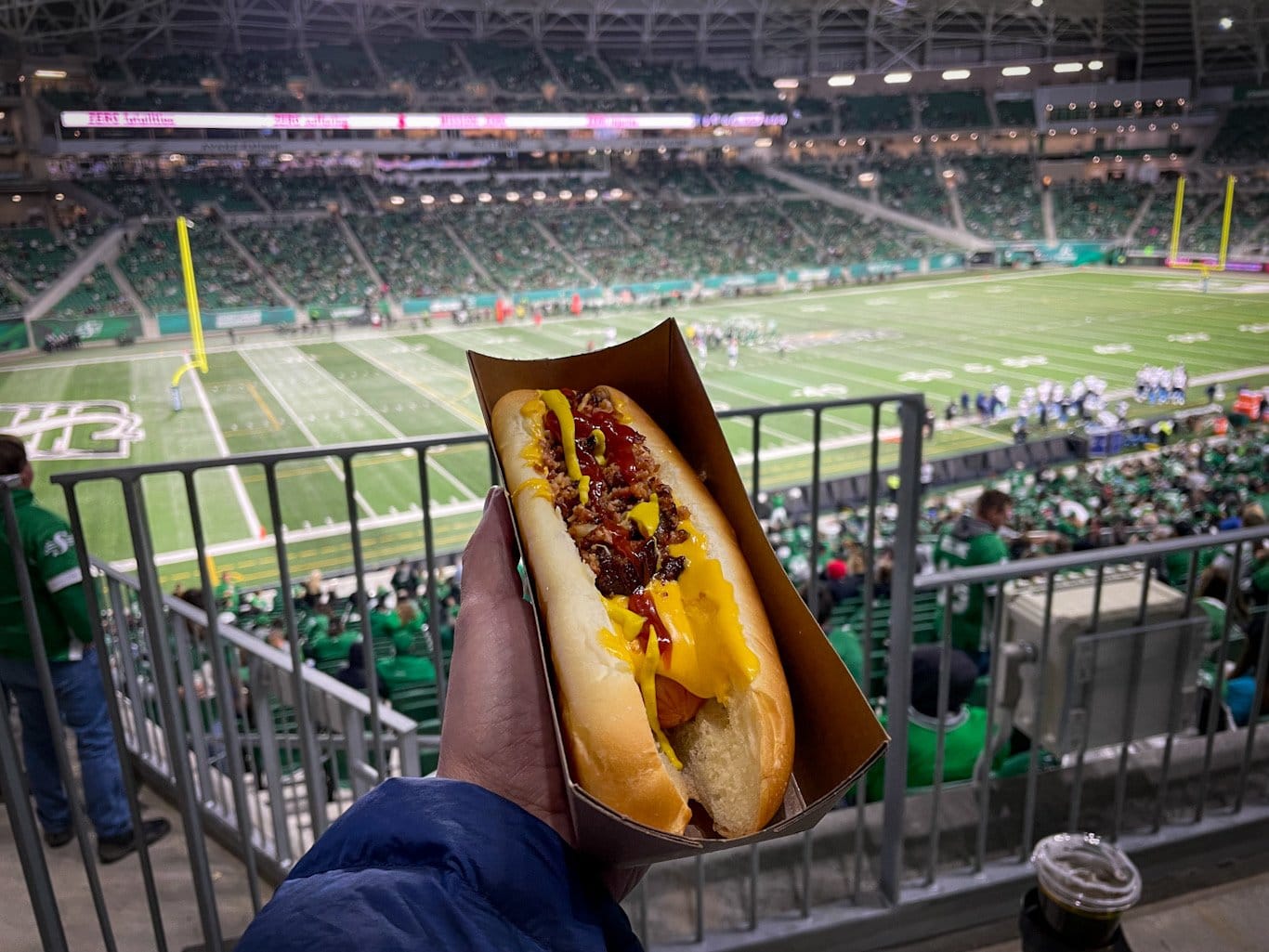