Failing to Launch at the Kennedy Space Center

Rockets are awesome. Space travel is amazing. The very fact that man walked on the moon is mind blowing. So why in the world did I feel like I was walking into a theme park at the Kennedy space Center instead of the historical facility that it is? I have a few theories:

Cape Canaveral’s location as a rocket launch site wasn’t by chance. This spot was chosen for its isolation and proximity to the empty Atlantic for obvious reasons. It was also chosen long before the likes of Disney, Universal Studios, and Legoland set up shop. Strolling around the historic grounds on Cape Canaveral I couldn’t help but feel that The Kennedy space Center was trying too hard to provide that theme park experience found elsewhere in the State instead of focusing on the facts and artifacts of man’s greatest feat. In a way, I understand that they have to cater to the crowds, but it was not what this space nerd was expecting. 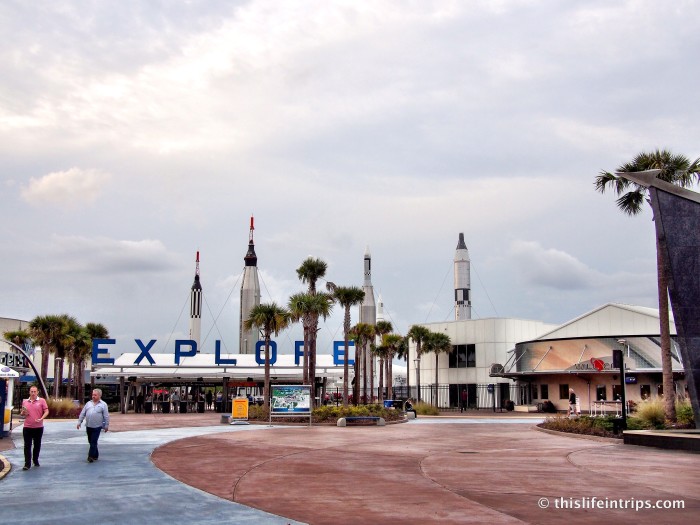 Walking through the gates of the Kennedy Space Center you are immediately met with food courts and gift shop selling anything and everything space related. Astronaut ice cream? Sure. Space dots? Why not. Lego spaceman? Absolutely. This, of course, was not surprising after spending a month south of the border. Any attraction or tourist site you will find much of the same. I guess I thought the science of it all would outweigh the Americana. Seeing one of the Apollo lunar landers hanging from the ceiling then looking down and watching a guy enjoying his chili-cheese fries in the food court directly below it solidified this oddity for me. Seriously. This incredible piece of machinery landed on the freaking moon and you stick a cafeteria under it? Neil Armstrong is truly rolling in his grave. 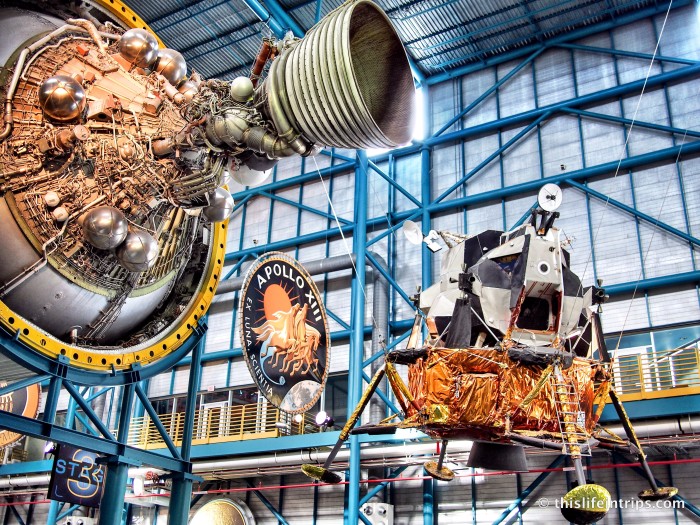 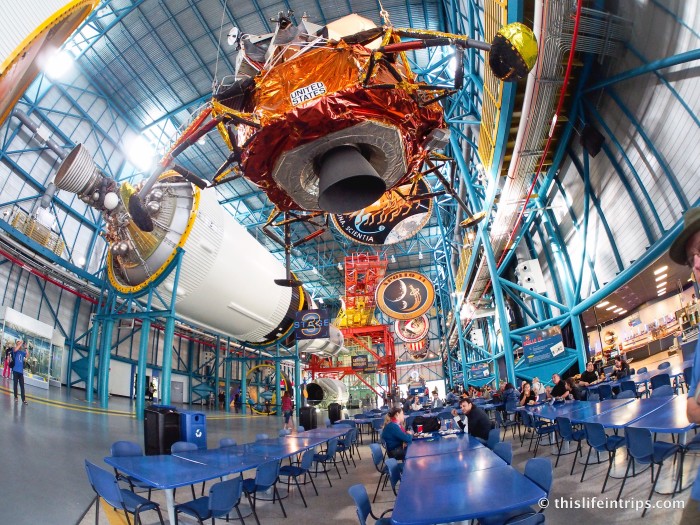 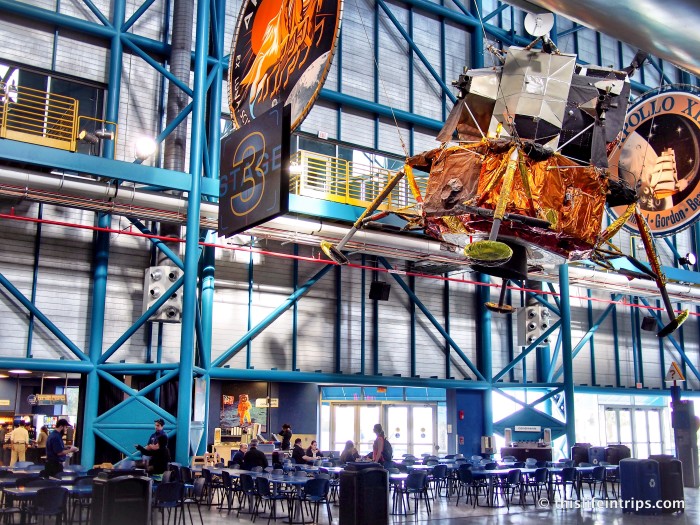 On the flip side of evidently caring too little, the Kennedy Space Center goes way over-board with its presentation of the Saturn V rocket. Ditto with the Atlantis shuttle. Prior to unveiling both, viewers are treated (forced) to sit through the most dramatic introduction possible. Guests watch a dramatic reenactment of the Saturn V rocket’s first launch in the actual command center that was used decades ago. Again, super cool on its own no? The Kennedy Space Center decided to add effects of vibrating windows and display monitors of counting it all down. The Atlantis unveiling includes a short film on the making of the space shuttle which reminded me of a made-for-TV movie with no shortage of cheese. After the film completes the curtain is raised behind intense music – revealing the Atlantis strung from the ceiling. 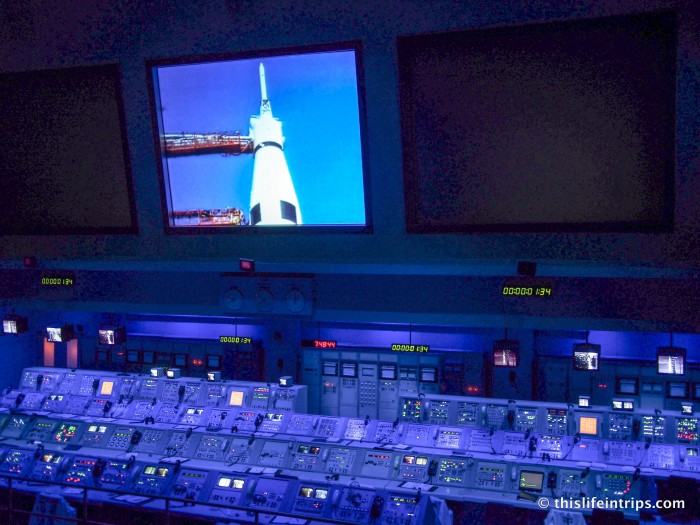 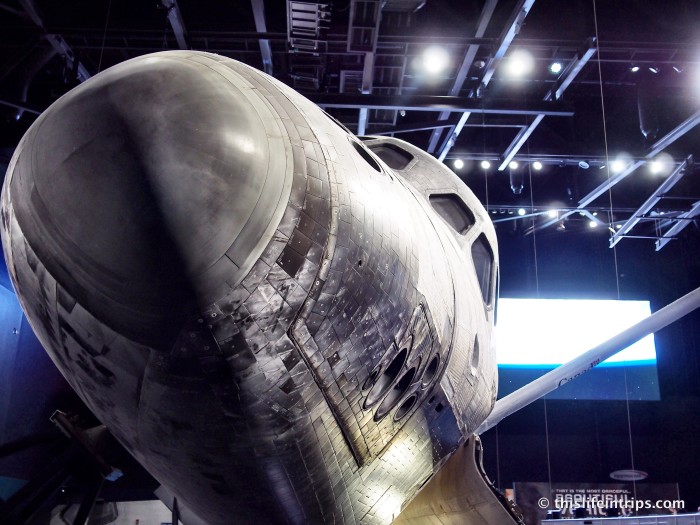 We are long past the race for space and America’s love affair that came with it. NASA’s funding has been severely cut and today the facilities launch pads are rented out to a slew of private companies funding their own space missions. The Kennedy Space Center is self-supporting and gets no love from taxpayers or the government. I can only guess that the Disney feel is an effort to bring in much-needed tourist dollars and attention and, if that is the case, I can understand. Sadly tax dollars can be better spent on things other than firing people into space.

Behind the Hollywood touches and corndogs of the Kennedy Space Center does lie amazing and cool memorabilia and the true science of space travel. The Rocket Gardens is a collection of vintage crafts and is worth a stroll. There is a bus ride that takes visitors around the property and passes the historic launch pads and massive hangers we have all seen on TV and the Saturn V exhibit is super cool. After the cheesy launch simulation guests enter a massive room with the Saturn V rocket strung out in segments. The worlds largest and most sophisticated rocket is awesome and super sized in real life. Worth the ticket price alone, even if it does hang above a cafeteria. 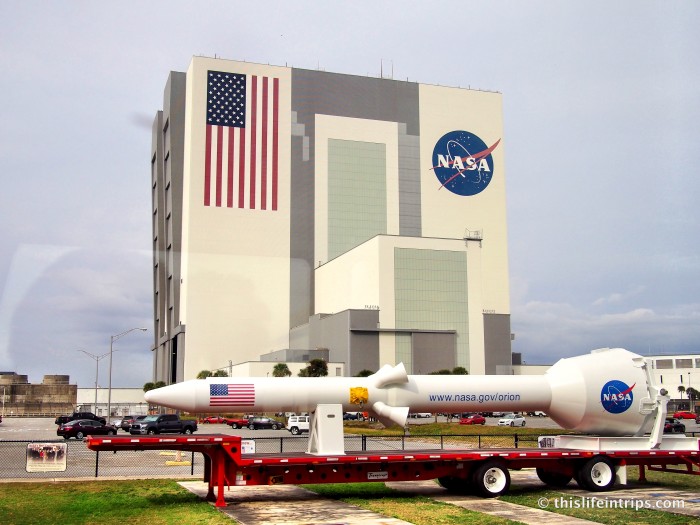 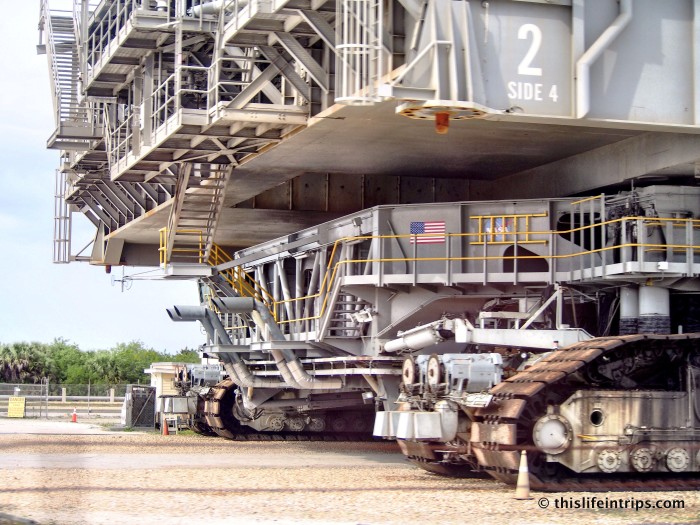 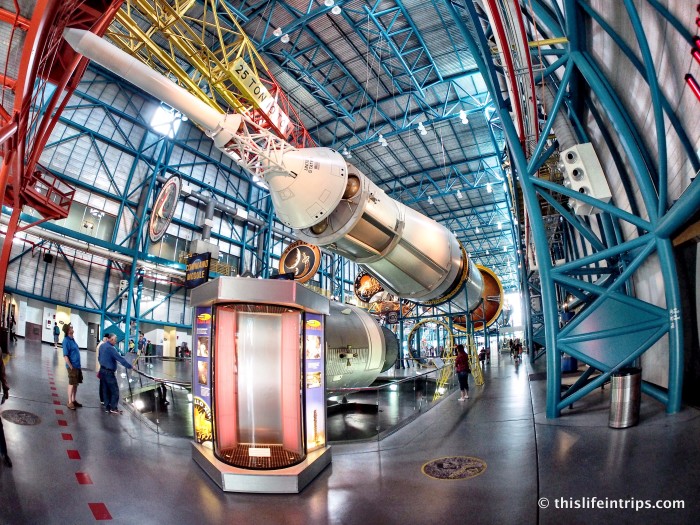 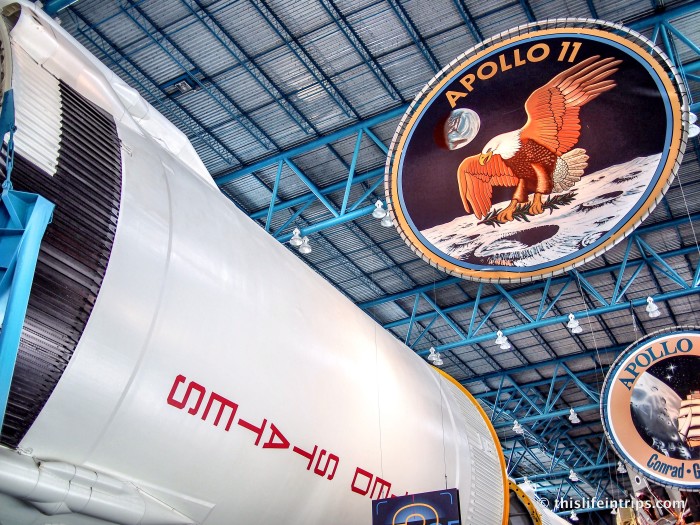 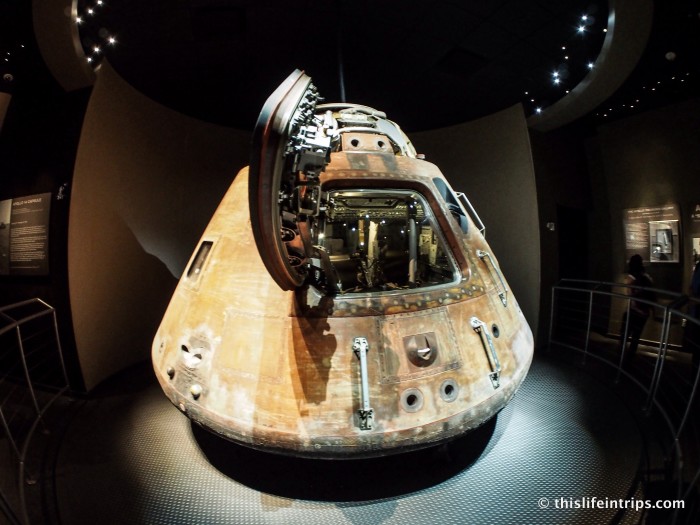 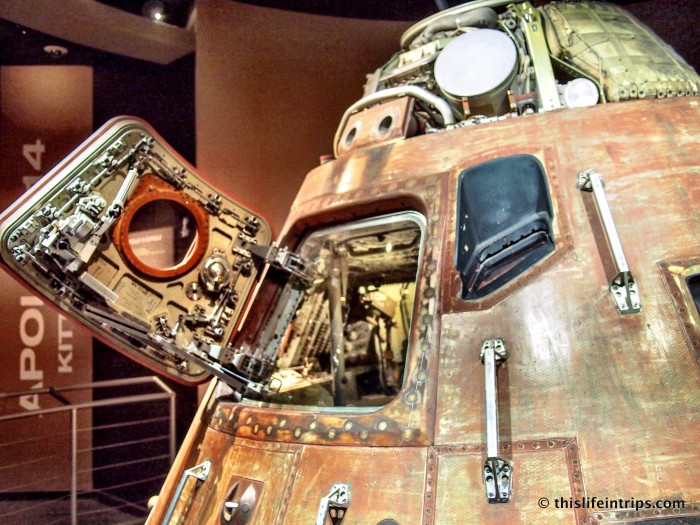 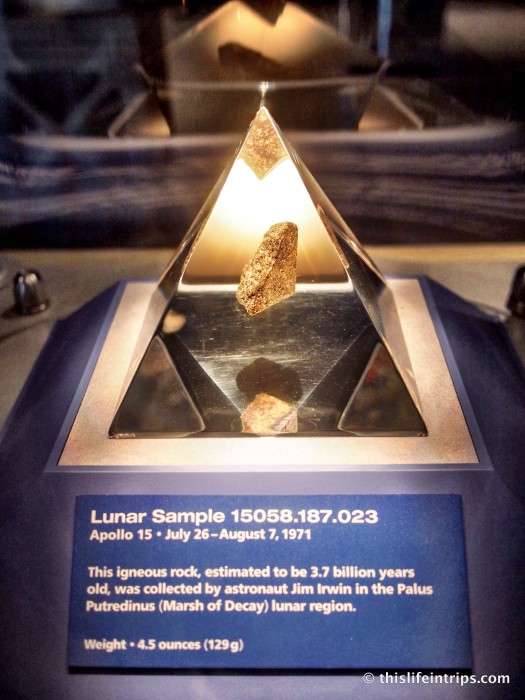 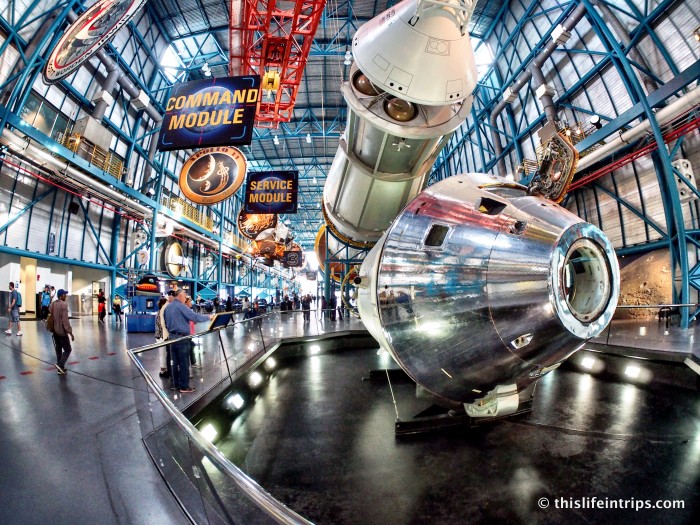 The Atlantis exhibit is pretty cool as well and pays homage to the game-changing spaceship that it is and was. This area of the Kennedy Space Center includes plenty of interactive stations used to educate guests – including a slide that is some how supposed to simulate landing? Also, the Canada Arm is given its moment and acknowledged as a crucial piece of technology  in the construction of the International Space Station (although referred to as the “robotic” arm in the IMAX film on the station!) 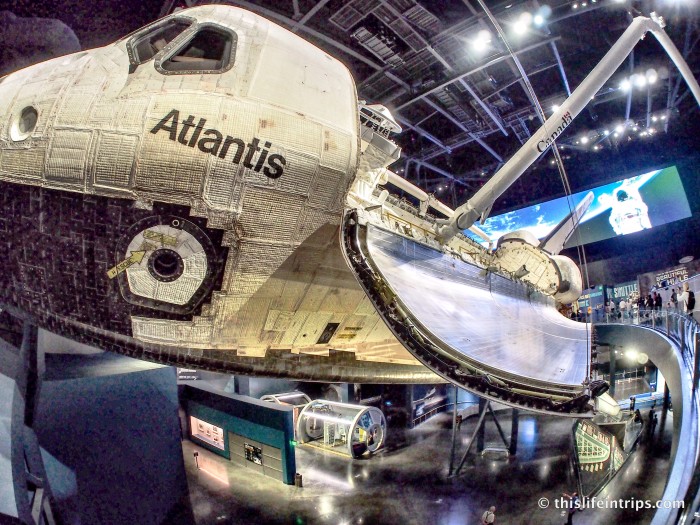 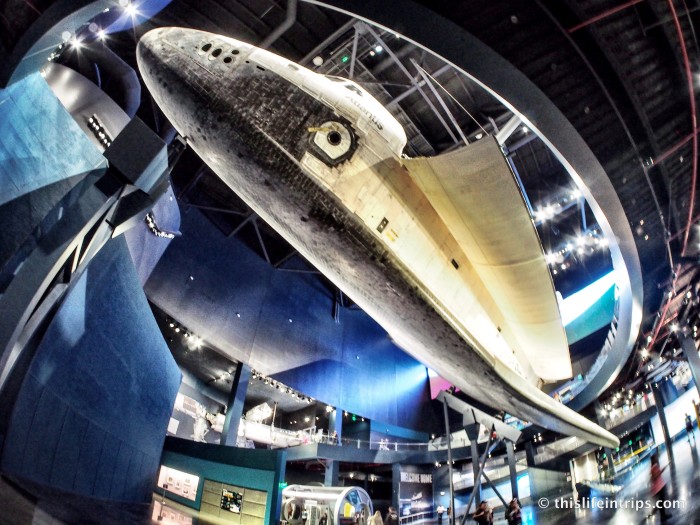 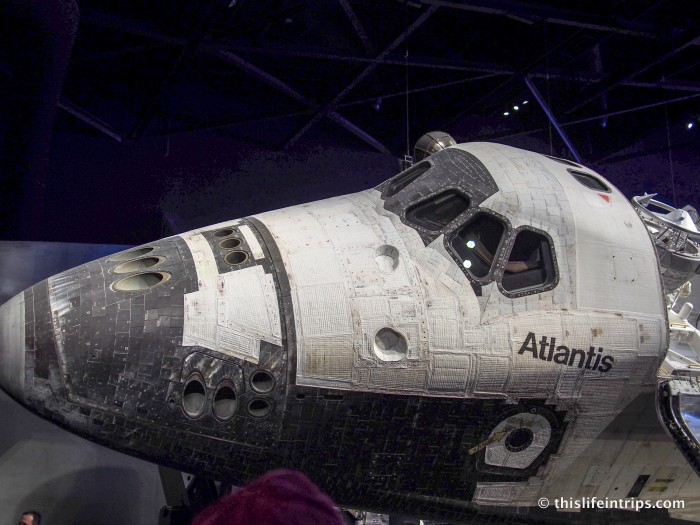 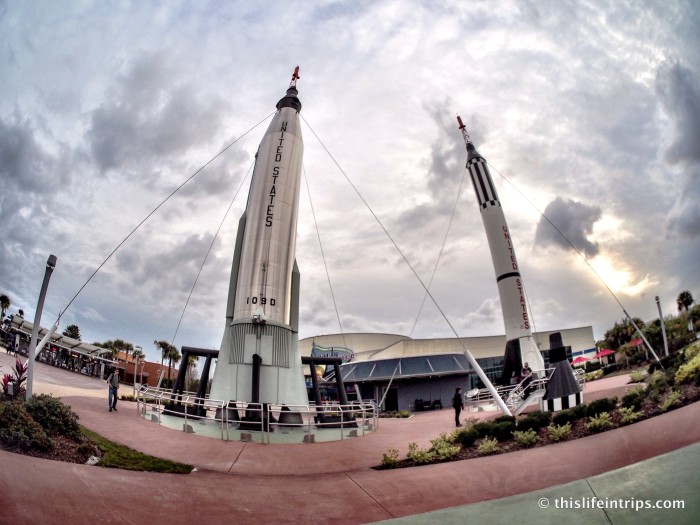 And really, I can’t fault the Kennedy Space Center for trying to appeal to the masses. Sadly, that’s on us.

Although I was provided complimentary access to the Kennedy Space Center,
the experience, opinions, and space walks are my own.