In the historic Railhouse Park and in the shadow of the CN Tower you will find the home of Toronto’s favourite premium Pilsner – Steam Whistle Brewing. Recognized from coast-to-coast for its green bottle and whistleblowing logo, Steam Whistle is a refreshing beer that I have come to enjoy and was eager to try it straight from the source. On my last visit to Toronto, I was lucky enough to do just that. Here is my Steam Whistle Brewery tour review. 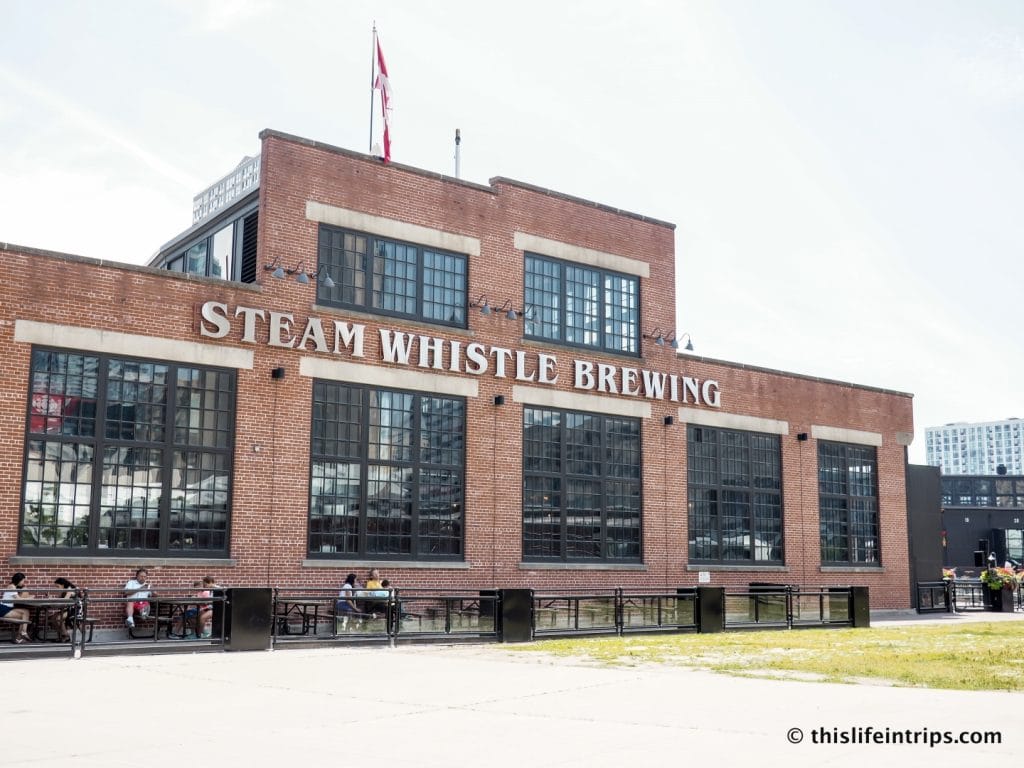 Tours of the Steam Whistle Brewery run every half hour between 11:30 AM and 5:00 PM, seven days a week. Tours cost just $10 and are best booked online and in advance. I found this out the hard way when I showed up to find all tours were booked up on the day of my visit. This is the one and only time I name dropped and pulled my business card. I’m not proud of it but am thankful it worked. 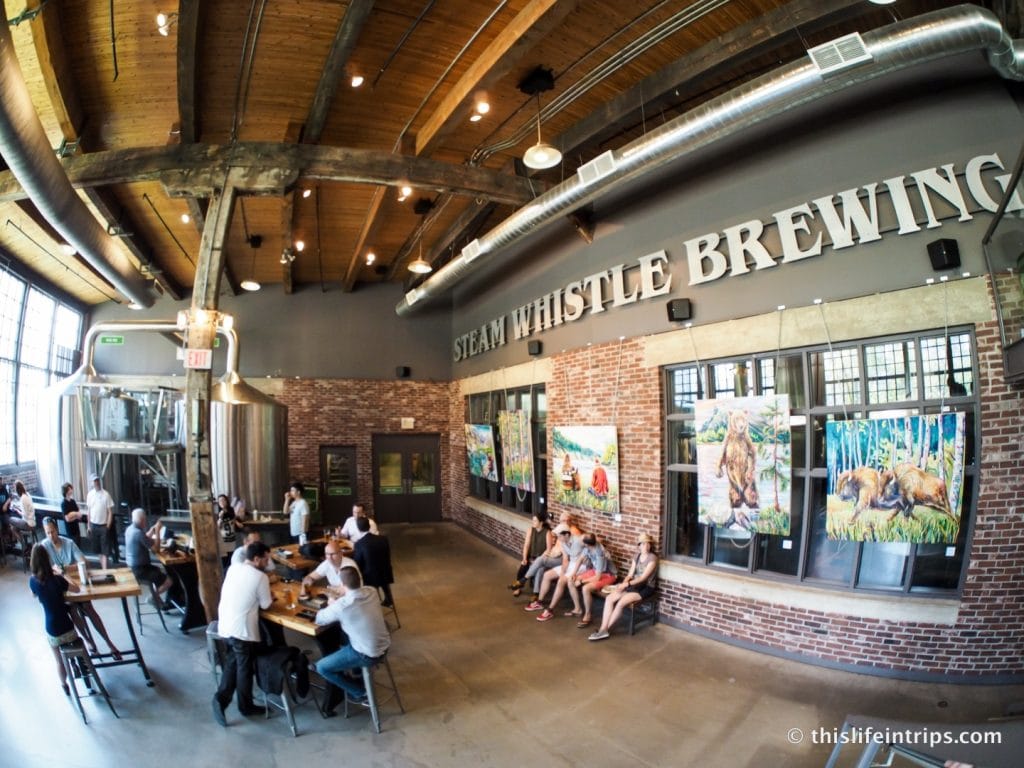 Tours begin with introductions in the grand Roundhouse Hall. There, tour guides hand out headsets and an ice cold Steam Whistle. The latter was a great touch. There’s nothing more refreshing than drinking a beer while learning about its origins and seeing where it is brewed. 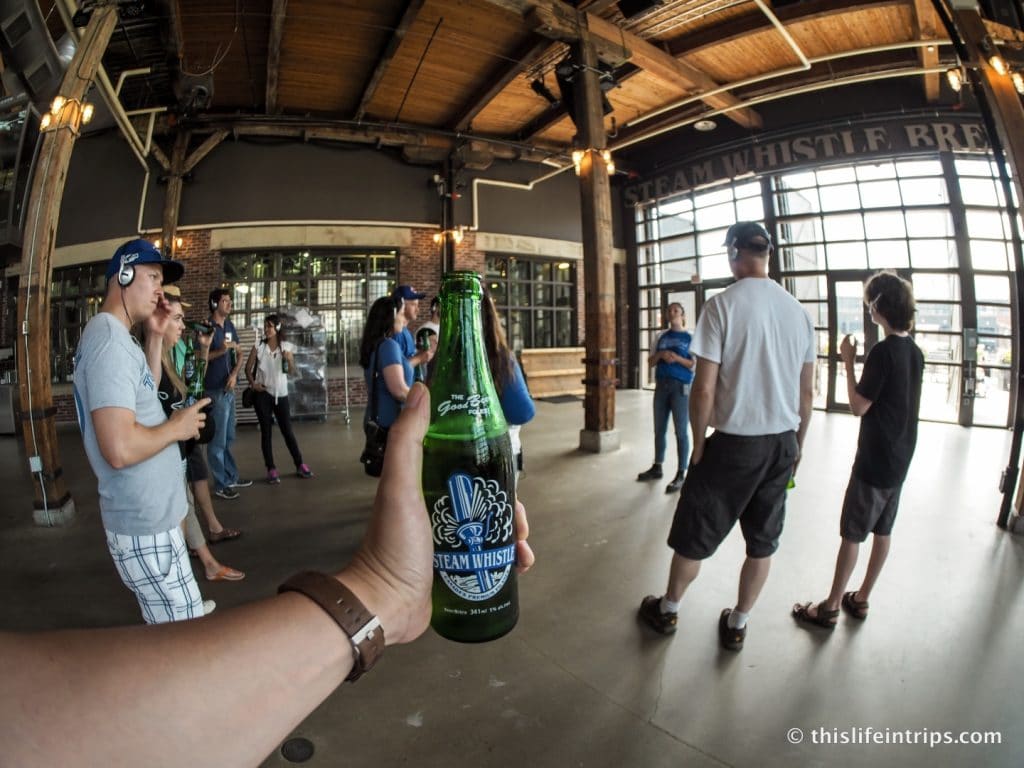 Beer in hand and headset on, you are led through Steam Whistle’s brewing process. This takes you past the brewery floor, through the surprisingly small bottling area, and past the small head office. For such a seemingly large brand, Steam Whistle’s operation is this impressively small. This is because Steam Whistle Brewing only makes one beer. With a motto of “do one thing, really, really, well” I should have clued into this. 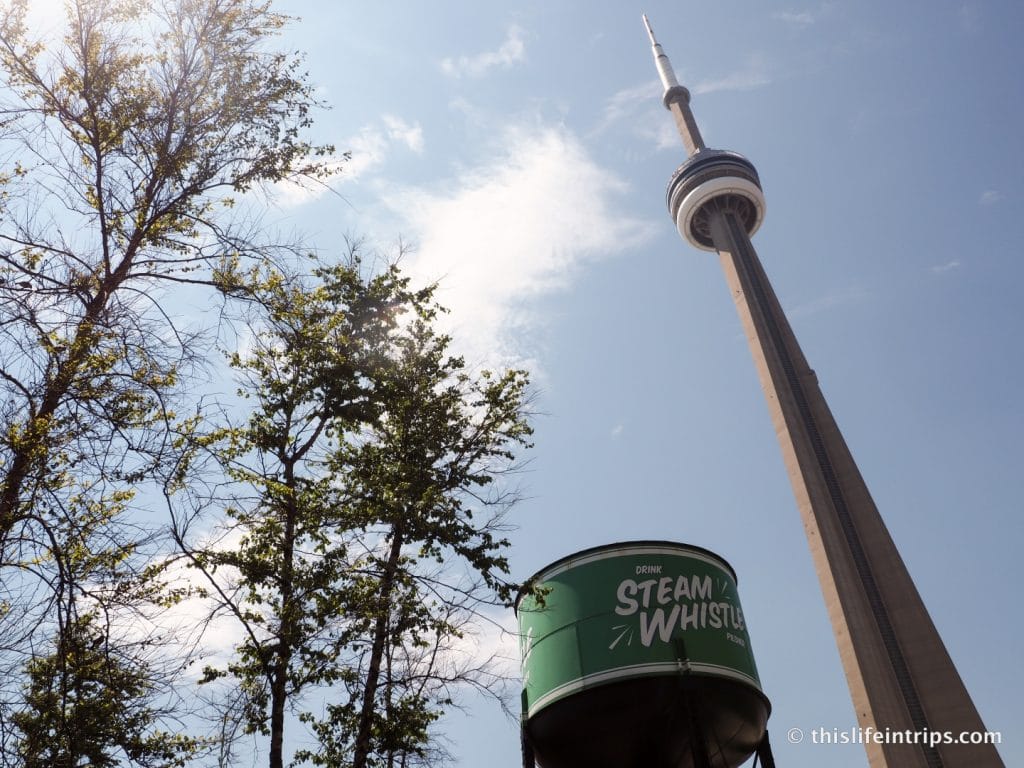 Like many success stories, Steam Whistle’s vision of making one really great Pilsner was born out of defeat. The three founders worked together at a popular brewery that was bought out by a big beer company and subsequently shut down. During a canoe trip in Ontario, the “three fired guys” hatched a plan to run a brewery of their very own.

How Canadian is that?

Since the spring of 2000 Steam Whistle has been doing just that – proudly becoming Canada’s premium Pilsner brand in the process.

What’s in a Name? 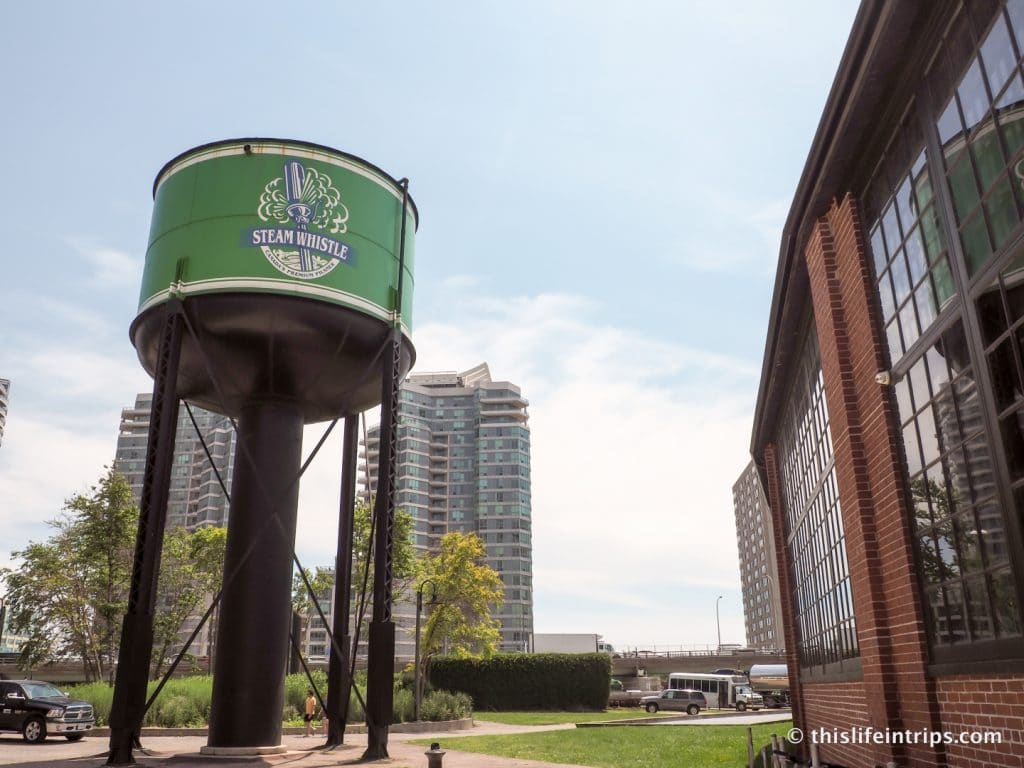 Given the businesses fitting location in the historic John Street Roundhouse you would assume it’s name was derived from that. Not so. During the tour, our guide advised us that the name Steam Whistle came before the location. In reality, it pays homage to a simpler time where hard-working folks ended their hard day at the sound of a steam whistle blowing. The reward? Canada’s finest beer.

If that isn’t a story of most fitting location for a brand, I don’t know what is. 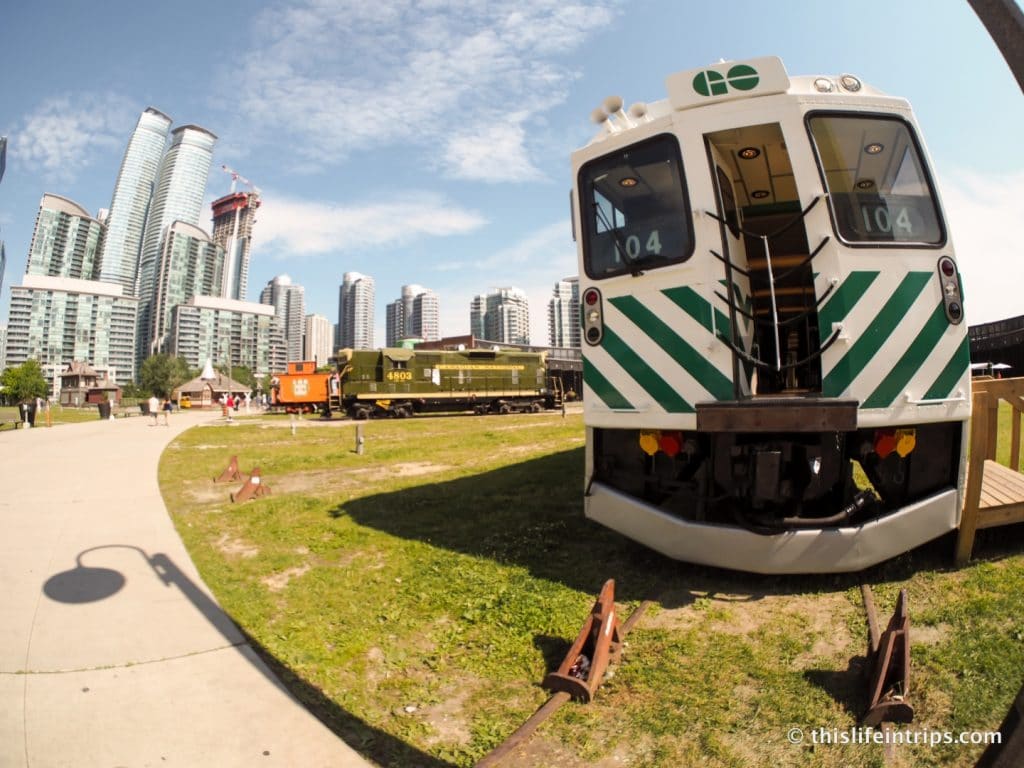 Although the location is fitting and incredibly convenient for tourists and for foot traffic, their hours are not. On my day visiting Steam Whistle I was going to a Blue Jays game at the SkyDome which is conveniently located next door. This makes it the perfect place for pregame beers right? No, or at least not on at an evening game. Steam Whistle closes its doors at 6:00 pm, which contradicts its end-of-the-day homage of a name.

Is this due to an outdated law or a sign that stranglehold the big beer companies have in Ontario? Maybe. A shame? Absolutely. 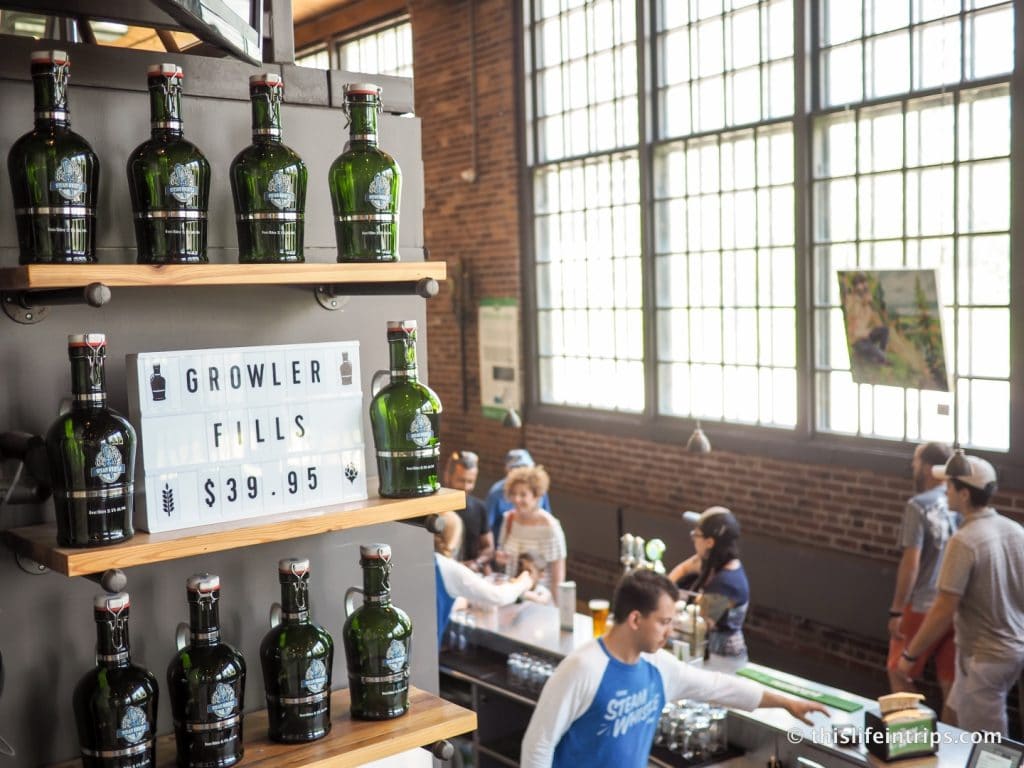 Touring Steam Whistle ends at its bar with a sampling of unfiltered and unpasteurized beer straight from the tap. This is a great touch and shadows what you will find at the famous Pilsner Urquell brewery in the Czech Republic (check out my review of that brewery here!), home to the very first Pilsner. The similarity may not be a coincidence as Steam Whistle brewmaster just happens to be a Pilsner Urquell former employee.

This is just another example of how Steam Whistle is committed to doing it’s one thing, really, really well. 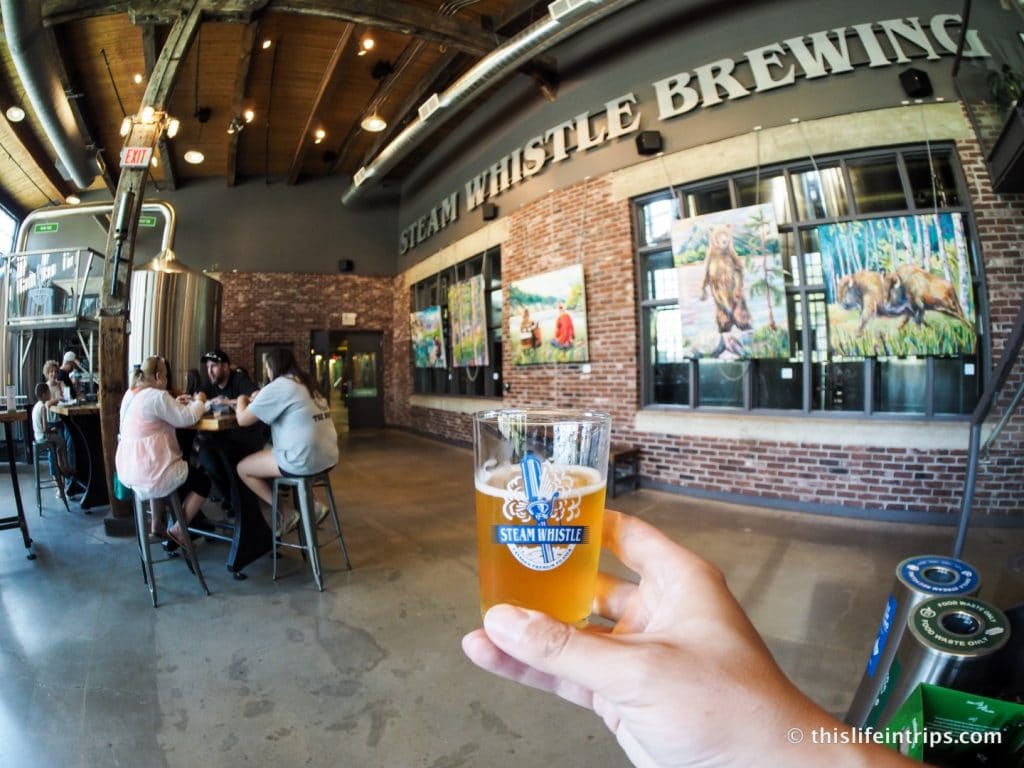 Whether you are pre-gaming (an afternoon) Jays game or strolling the waterfront, touring Steam Whistle’s historic building and its brewery is a must do for beer lovers alike. 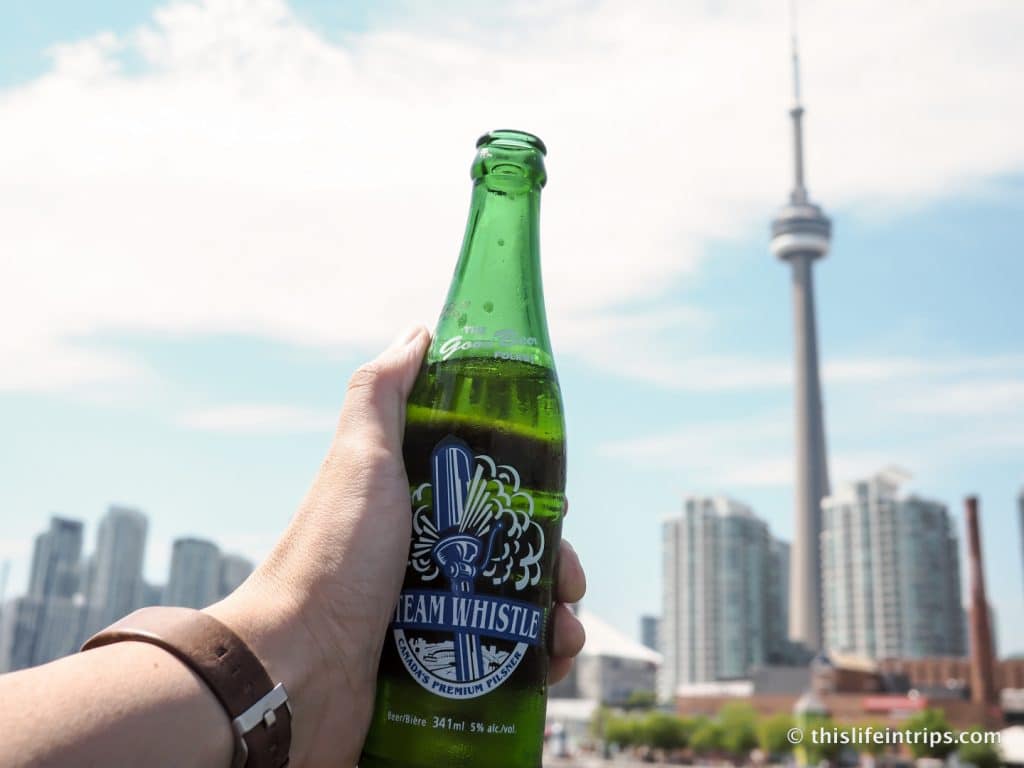 What say you?
Thoughts on this Steam Whistle Brewery Tour Review in Toronto?
Let’s hear it!