For my first Central American experience, I head to Nicaragua’s most scenic town – Granada. Unfortunately, I did so after a burn out 3-months through Europe. This left me with little desire to climb mountains or go trekking through a jungle. Still, with only 3 days in Granada to spend, I was able to cover many of its local highlights in lazy fashion including its colonial courtyards and swimming in a volcano.

Located a seemingly short 42 KM from Managua, getting to Granada can be a gruelling ride. For a couple of dollars, you can catch a colourful chicken bus but be warned, this ride is long and uncomfortable. As I only had 3 days in Granada to spend and was doing so as lazily as possible I opted to arrange private transport through my hotel. At about $60 it was not cheap but it was quick, comfortable, and safe as we arrived late in the evening. 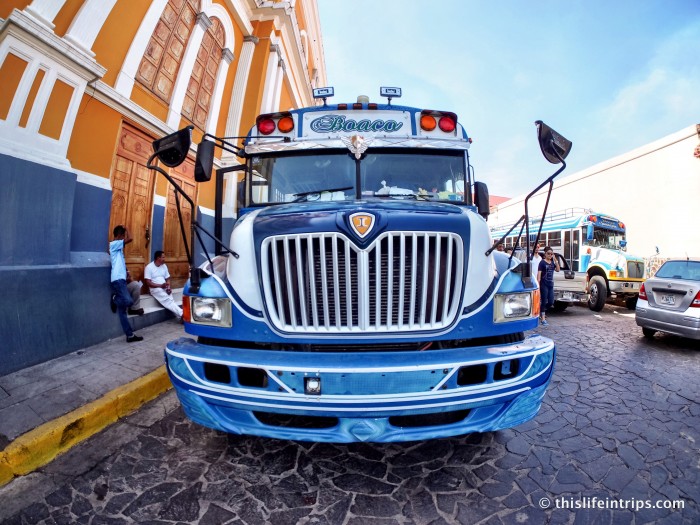 Granada’s colonial past is on display with its colourful buildings and iconic churches. After dragging myself out of my air-conditioned room I hit La Calzada street which is lined with many well-kept examples of colonial architecture. Being the tourist strip, La Calzada street is where you will find the city’s most popular (and surprisingly expensive) restaurants and bars. Still, there is no better place to relax with a drink street side. Being exhausted I was happy to pay up and enjoy the local views.

In the center of it all you will find Granada’s Central Park. This busy spot is always alive with tourists and locals alike. Take in the views from the Cathedral tower or enjoy some street eats from one of the many vendors. 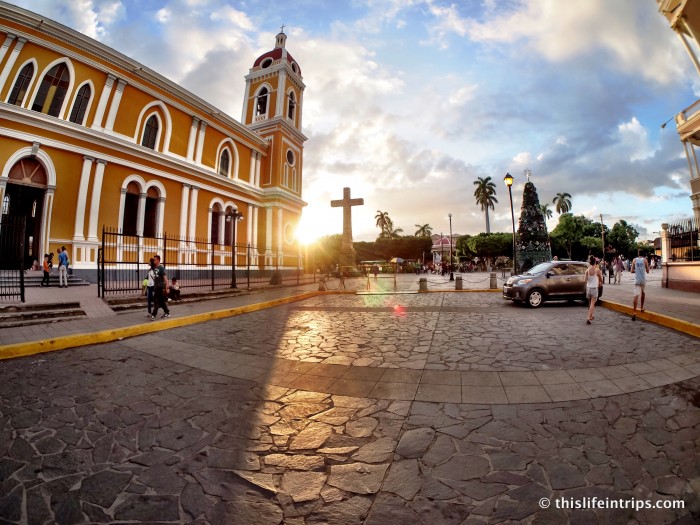 A few blocks south of the main square is Granada’s Mercado Municipal. There you can wander the streets and really get a sense of day-to-day life in this laid-back town. I lasted a total of 10 minutes wandering the stalls before returning to my favourite street side bar.

Following La Calzada street east you will end up on the shores of Lake Nicaragua – Central America’s largest lake. This important source of freshwater is vital to Granada and the country of Nicaragua. Although not the most scenic waterfront around, a stroll along the promenade will take you, past locals, cooling off in the afternoon heat. If you are spending a few lazy days in Granada as I did, take a carriage ride to see the shoreline. 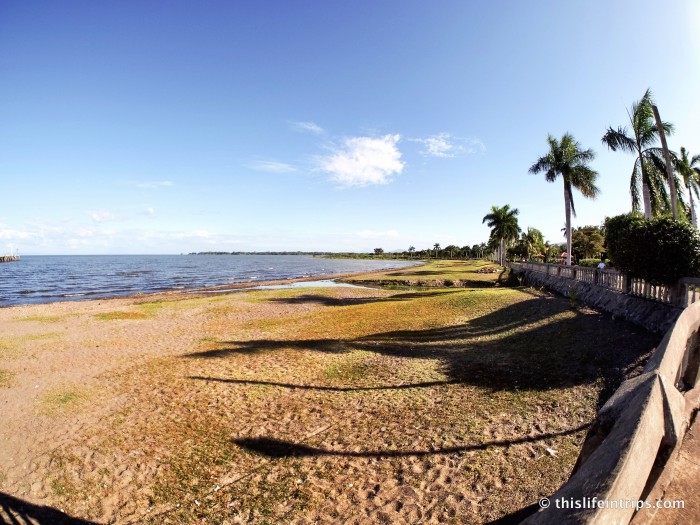 Although I felt bad at first, I couldn’t let my 3 days in Granada lapse without taking a horse carriage ride. From the main square hire a carriage to take you on a stroll around the city while the driver shares a little history of the town. Ask for a pitstop to buy some beer and enjoy the clip-clopping along the cobblestone streets.

To really appreciate Granada you must see it from above…probably. I started feeling guilty about my laziness and with only a couple days in Granada left, I decided to sweat a little. Although the Granada Cathedral offers stunning views from its bell tower, the Iglesia de la Merced church tower is better – mainly because you get to see the Cathedral in your view. Take in both and compare or save the sweat and stick to the 16th-century Iglesia de la Merced, your call.

For a couple of dollars, you can tour the volcanic islands just off the shores of Granada. You could rent a kayak but this is a lazy recap of my 3 days in Granada. Get on board.

Highlights include Monkey Island and the “mansions” that are built on some of the tiny islands. Again, don’t forget the Cerveza. If you did, don’t fret. There is a bar on one of the islets and staff is more than happy to take your order.

Climb (or swim in) a Volcano

Climbing the Masaya Volcano is a popular activity when spending 3 days in Granada…just not for me. I’m sure the views are stunning and the satisfaction is immense, but in 30+ heat being on the side of a black rock emitting farty-sulphur is not my idea of fun. Swimming in clear, cool waters inside of a volcano, however, is. Located a short drive from Granada are Laguna de Apoyo – a volcanic lake and nature reserve. For ~$20 USD you can enjoy the facilities at Laguna Beach Club and relax inside (and not on top of) a volcano. 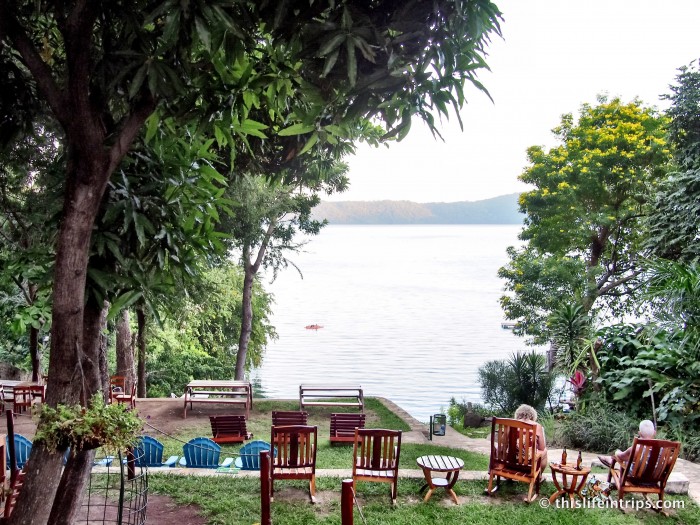 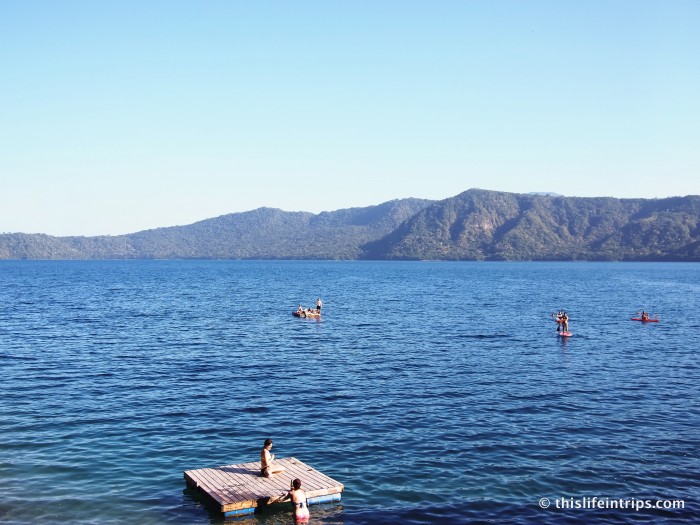 I can’t say I had heard a lot about Nicaraguan food before my visit so surprisingly, I don’t have much to share. Granada does have a couple of local treats. In the main square look for vendors serving up vigaron. The dish is a mix of yucca, cabbage, and pork rinds. It may not sound appealing but it is fillings and surprisingly tasty. For about $2 a serving, the price is right too. 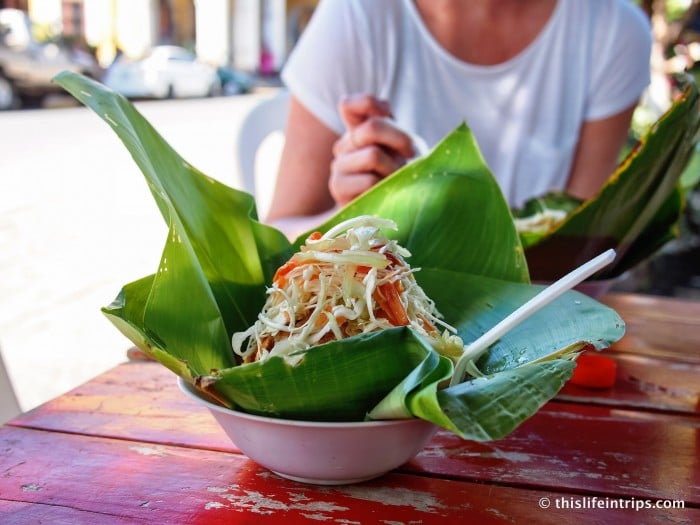 Then there is Cacao, a sweet mix of cinnamon, vanilla, and chocolate milk which is great on a hot day. Other than that, stick to the tourist strip of La Calzada for a surprisingly great selection of eats and cocktails. For those on a budget, don’t miss happy hour for great food and drink specials.

What say you?
Did I miss out spending 3 Lazy Days in Granada?
Let’s hear it! 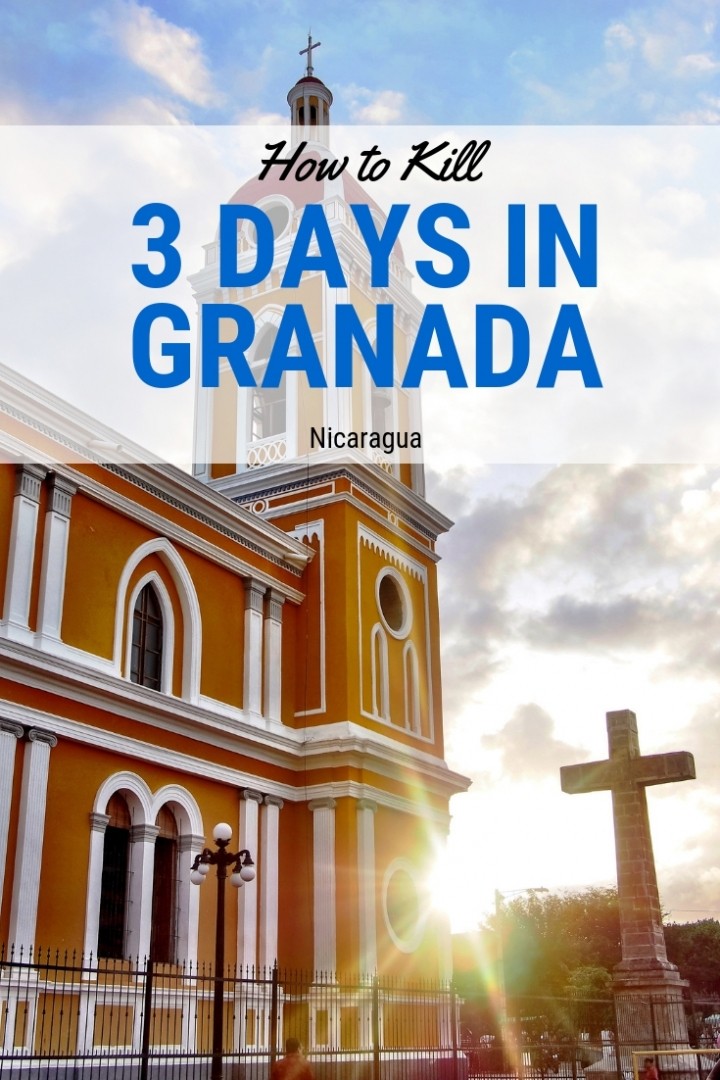