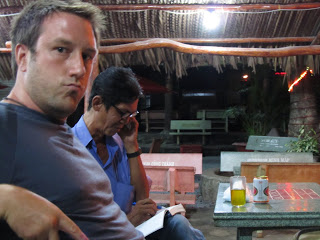 With the short amount of time we had to plan for Vietnam we only picked where we would like to go and not necessarily how to get there. Our next stop was the small resort beach town of Mui Ne which is only about 200 KM east of HCMC. Little did we know that the short distance took a 5+ hour white knuckled car ride to get there. With only 48 Hours in Mui Ne to spend we hired a private driver (for way to much Dong) to take us from Saigon airport to Mui Ne the night we got back from Siem Reap. We also did not have a place to stay so we asked our expensive chauffeur to call around to a few places we had picked out online/in our guide books. He was nice enough to do this on his smoke/beer break about half way to the beach. Like almost every other local we have or will meet on this trip, he tried to scam us into staying at a particular place for way to much. We kindly declined his suggestion and said we would try our luck once we arrived. Groggy, tired and in no mood to haggle over price, we took our first option when we pulled in around 1:30 AM. To our pleasant surprise we awoke to our own little (and very private) paradise complete with beach, pool, and “Sex Samurais” 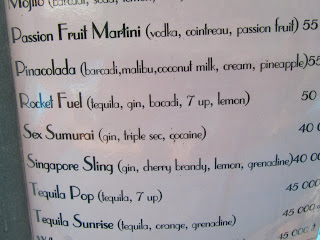 Don’t worry, its just a hilarious typo…and a terrible drink. Gin and some sort of powdered coco. Ninja’s love it though.

What to do with only 48 Hours in Mui Ne

With less than a week to make it the north to Hanoi to catch our flight to Tokyo (via HCMC) we wanted to book our travel ASAP. Justin and I set out to find a travel shop…or at least a reputable one. We got about 15 ft then decided to rent scooters instead of walking in the heat like suckers. Justin was a bit hesitant as he took a bit of a spill on a bike in Thailand. I was a bit hesitant as I have the balance of a baby deer riding a scooter on ice. With that in mind we thought it would be best to stop for a little liquid courage before continuing. Makes sense.

Confidence restored we hit the road. Mui Ne is a long crescent shaped beach that has one road that follows along side it. This makes it a relatively scooter friendly spot for tourists in Vietnam…even though obstacles include goats, cows, tour buses and oncoming traffic.

After securing the next leg of our trip (a 17 hour bus ride to Ha Noi!) we cruised the strip once more then enjoyed a relaxing day of resort living. Pool side drinks followed by playing in the surf and a sunset on the beach. Rough life.

The next morning we were once again up at 5:00 am for another sunrise tour. For those keeping track that is two stupid early tours this trip which is two more stupid early tours that I ever thought I would do in my life time. Nevertheless we were up to enjoy some of Mui ne’s unique sites. Our first stop was the white sand dunes. Walking on the sand during the day would be unbearable thus the early visit. Its a beautiful and totally random site in a country that is covered by jungle. As pretty of a spot that it is it doesn’t warrant getting up at 5:00 am. No, the real reason for the early rise was to go sledding…in Vietnam. Who knew?

Next up were the Red Dunes and some various red sand gorges. After that we stopped and watched a small fishing village come to life with the morning catches. Most amazing are the small tea cup like boats that are used. I wanted to try one out but figured I would end up spinning in one spot. 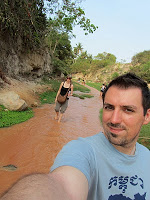 Last up was a very enjoyable walk up Fairy stream. Although it goes against everything our travel doctor said about Vietnam (1. Don’t walk bare foot in Vietnam. 2. Don’t go in any fresh water in Vietnam) we pushed on as it looked to nice to pass up. Parasites shmarasites. The colors are amazing. Bright reds and oranges contrasted by lush green vegetation. For all we knew we were splish-splashing our way through a sewer drain but we didn’t care. It was just that nice…minus the unwanted 9 year old “tour guides” extorting us for our dong.

We arrived back at the resort with enough time to eat and hit the beach for a few hours. The down time was welcomed as we had a very long and rough bus ride ahead of us. The ride proved to be particularly hard on Justin. Hilarity ensues…for everyone other than Justin.