A Cynical Review of the Country Music Hall of Fame

Evidently, I’m not the only one:

Pretty ridiculous right? Record companies have figured out the formula for churning out radio friendly hits, and it’s killing country music. Of course this opinion is subjective and of course there are plenty of great country artists out there, they just get buried under those radio friendly hits and rarely get heard by a country music outsider like myself. So with such as cynical view on country music, why the hell would I want to visit the Country Music Hall of Fame?

Because, I love music.

It’s always been a part of my life, and subsequently part of my travels. I’ve played in several bands and traveled the world just to see a show. I took a detour to Cleveland Ohio to see the Rock’n Roll Hall of Fame, visited Kurt Cobain’s hometown, and now, now I’m in Nashville – home of the Country Music Fame, a great reminder of what country music used to be.

Stepping through the doors you enter a gorgeous lobby highlighted by a water feature and a guitarist plucking country hits. The Country Music Hall of Fame is big. Like really big. The building is separated into three floors with the top dedicated to the early years as well as a rotating exhibition – currently featuring Kenny Rogers. We grabbed our self-guided audio tours and made our way to the third-floor while the guitarist in the grand lobby played The Gambler. I was already starting to warm up to the place.

Know When to Hold em

We toured the exhibit and took in all that is Kenny Rogers. Ironically earlier in the month while staying at a friends place in Toronto I asked them to put on the Kenny Rogers and Dolly Parton Christmas album that was in their record collection. I joked that I was huge fan but really just loved the tackiness of it. After touring The Kenny Rogers exhibit I can actually say I am a Kenny Rogers fan. It was extremely well put on and made it pretty hard to ignore the career he has had. From Grammys to wood fired chicken, Kenny has done it all. It’s also hard to deny the awesome pairing he has with Dolly. Seriously, Islands in the Stream? Solid gold. 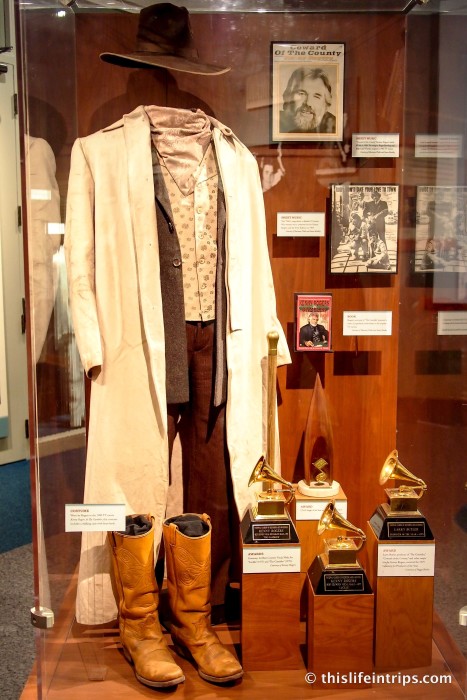 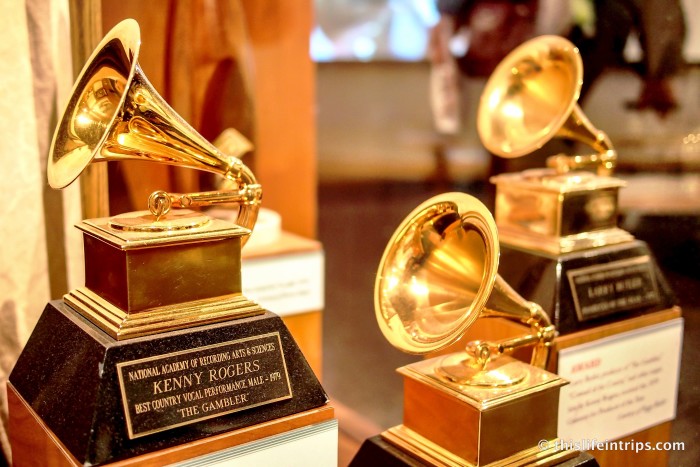 Past the exhibit and the Taylor Swift Education Center (that exists) the museum starts off with the history of Country Music. Fascinating glass cases with old instruments and photographs of country music’s roots are on display. We have come along ways from the fiddle playing, foot stomping western music from Atlanta in the 1920’s! 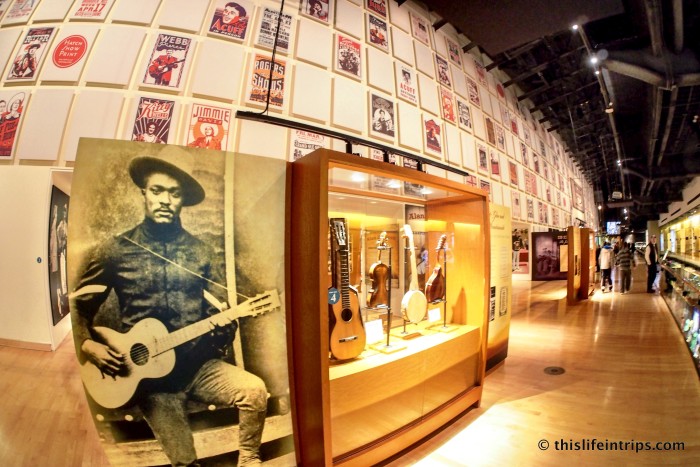 Continuing on, the Country Music Hall of Fame takes you through the progression of not just country music but pop music as well. Mainly focusing on those artists that got their rise in Tennessee, the HOF recognizes Rockibilly and the rise of less traditional instruments being used in Country Music.  From Johnny Cash and the Tennessee Two to Carl Perkins Blue Suede Shoes, this part of the Country Music Hall of Fame really is a music lovers treasure trove of hits. For me personally this section is highlighted by Elvis Presley’s pimped out (for the time) 1960 Series 75 Fleetwood Limousine sitting alongside his gold plated piano. Clearly The King had a King’s taste for excessive necessities. 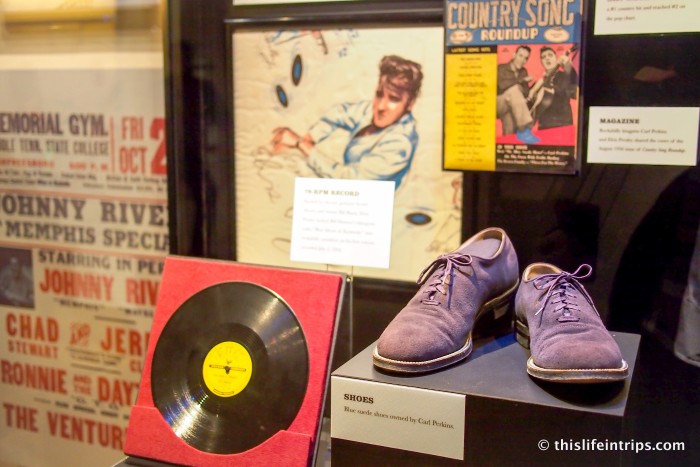 Working past these awesome collectibles you get into the television age of Country Music. During the 70’s and 80’s shows like Hee Haw and Nashville Palace flourished. There was also the birth of CMT, a station dedicated to all that is Country Music. It was odd from this outsiders view. All I knew of this period is what I have seen referenced through pop-culture. Still, many artists found their way through this medium and it played a big part in Country Music History and how all music is shared on TV. Also, it was interesting to find Canadian roots in Hee Haw, a show dominated by Canadian writers and actors.

The second floor is where the Country Music Hall of Fame fell apart for me. This area takes you through to modern-day country music. Somewhere between Reba McEntire’s pantsuits and Big and Rich’s top hats, I lost interest. Again I’m a bit biased but these acts do play a big part in shaping country music today, good and bad. I mostly skimmed through this section but did stop to enjoy the Trans Am from Burt Reynolds Smoking and the Bandit II! 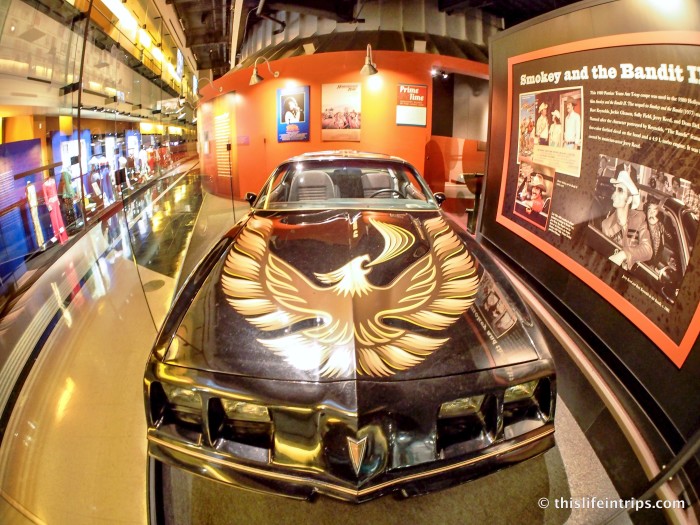 After exiting the modern era of the Country Music Hall of Fame we made our way to the hall itself, and what a hall it is! 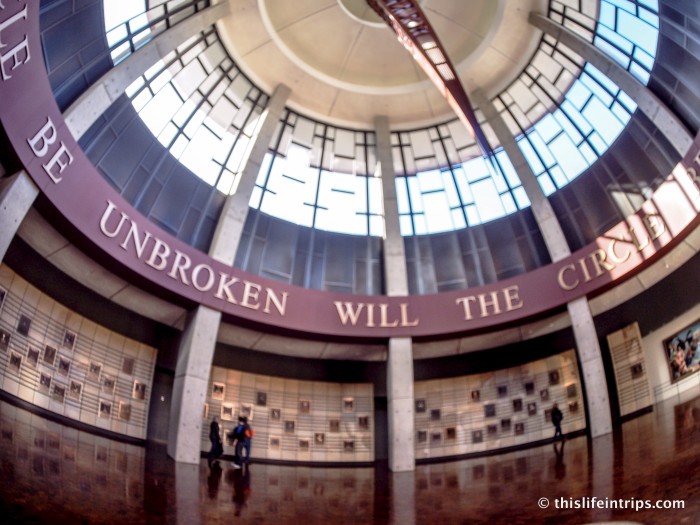 Inside there are over a hundred placards honouring the inductees to Country Music Hall of Fame. The room is as impressive as the names hanging on its walls and would definitely be an honor to be recognized there. 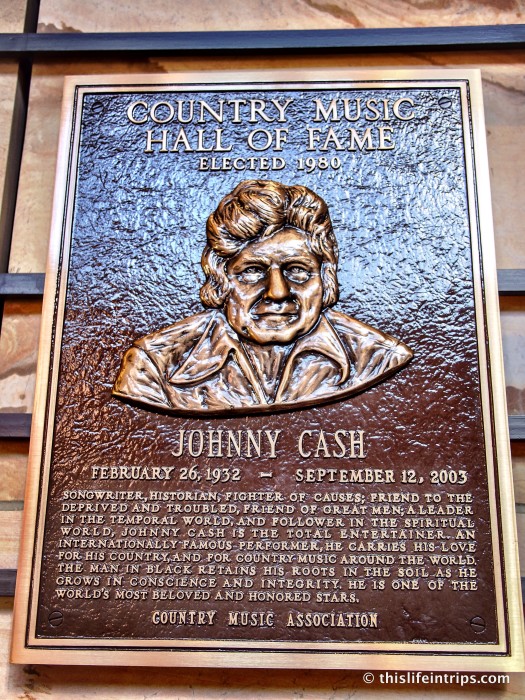 Although I  visited the Country Music Hall of Fame as a guest,
the experience, opinions, and foot-stomping are my own.

Written By
Shaun Robertson
More from Shaun Robertson
After spending an amazing morning with Voyager Balloons experiencing Cappadocia from above...
Read More