With 2017 being a big year for Canada, I felt the need to see as much of it as possible. Over the year I was able to visit two out of three territories and all ten provinces. This included a visit to New Brunswick, home to one of the countries oldest breweries. During my short time in New Brunswick, I was lucky enough to be able to stop in and take a Moosehead brewery tour, revealing an interesting story about Canadian beer as old as Canada itself… sort of.

This is my Moosehead brewery tour experience.

From Here to There – Moosehead’s Uniquely Canadian Story. 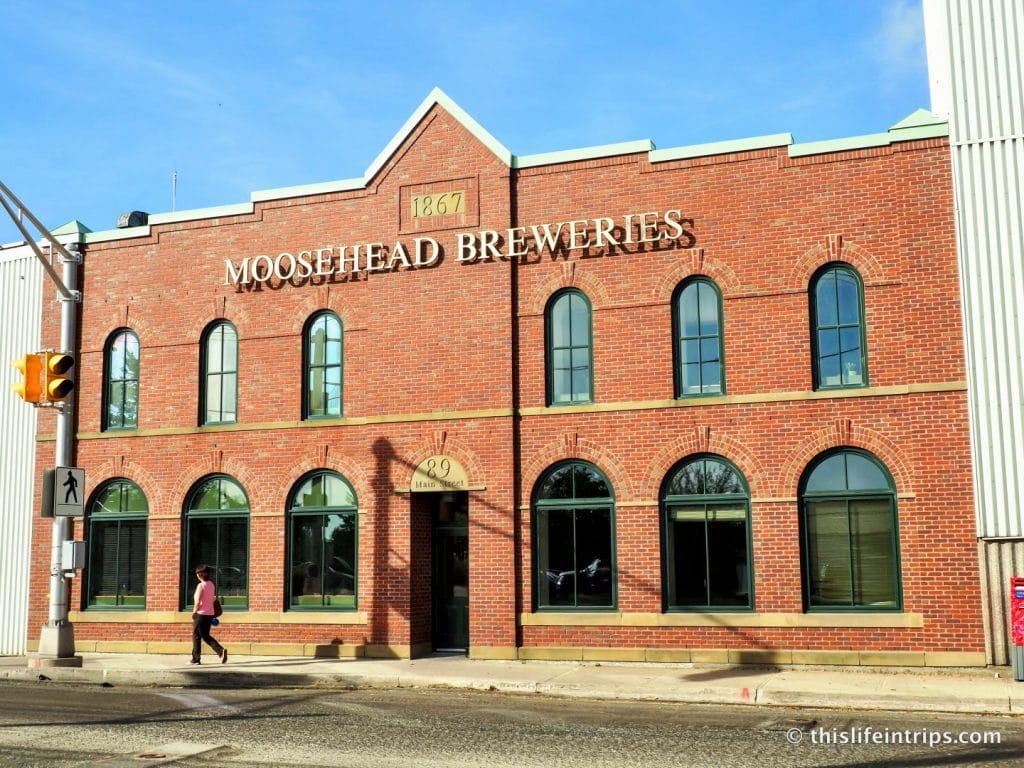 The Moosehead brewery is located on the south side of Saint John, New Brunswick. As I found on my tour, this is not the companies original location, nor its original name. Moosehead proudly claims it was founded in 1867, the same year Canada became a country, and therefore is Canada’s oldest independent brewery. Although technically true, Moosehead did not become “Moosehead” until the 1930s. Before that Moosehead’s home was actually in Nova Scotia, not New Brunswick.

It all started with Susannah Oland who opened the aptly named Army and Navy Brewery on the shores of Dartmouth. Serving up her October Brown Ale to customers coming directly off the ships, Susannah built a family business that has lasted to present day. During this time, the Oland family has seen a lot of struggles to get to where they are today. This includes two fires, a murder in the family, and the Halifax explosion in 1917. The later tragedy levelled much of the city including the Oland family brewery, killing six employees as well as Conrad Oland, Susannah’s son.

With public funds settled from the explosion, the Oland’s were able to continue brewing with the purchase of a brewery in Halifax as well as Saint John, New Brunswick. Fast forward to 1947 when the Saint John location changed their name to Moosehead after the success their Moosehead pale ale.

As interesting and uniquely Canadian as Moosehead’s story is, the company did not become the beer giant it is today until the late 70’s when they began exporting beyond the Canadian border. As I found on my Moosehead brewery tour, what won the beer over wasn’t necessarily it’s taste but its iconic green bottle and Moosehead logo. Taking a page out of Heineken’s book, Moosehead obtained an image of a premium beer brand and sold by the truckloads in the States, allowing the company to dramatically expand and become the beer giant it is today. 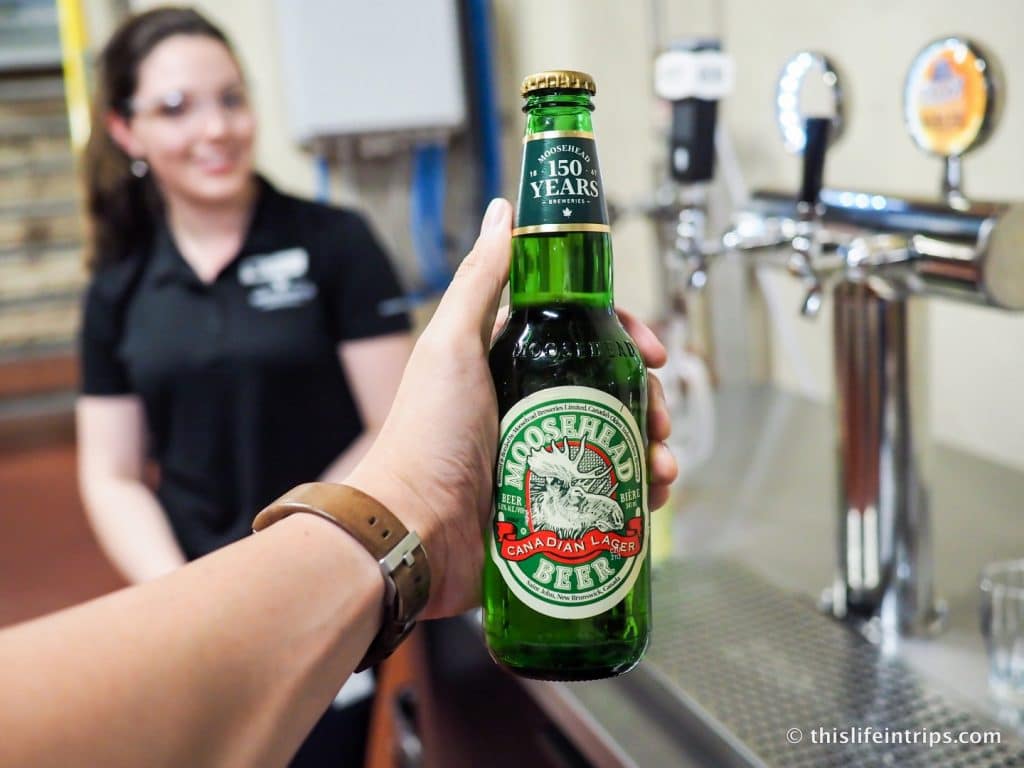 Although the Canadian Lager is available in 16 countries, it was not available across Canada until the 90’s. This made sense to me as Moosehead was never really on my radar until the last 10 years or so. This is because Moosehead Canadian Lager was exclusively sold to the states during the 70s, 80s, and 90s. Why? Canada’s bizarre alcohol laws between provinces. Thankfully laws have relaxed and now you can find this famous moose coast-to-coast-to-coast. 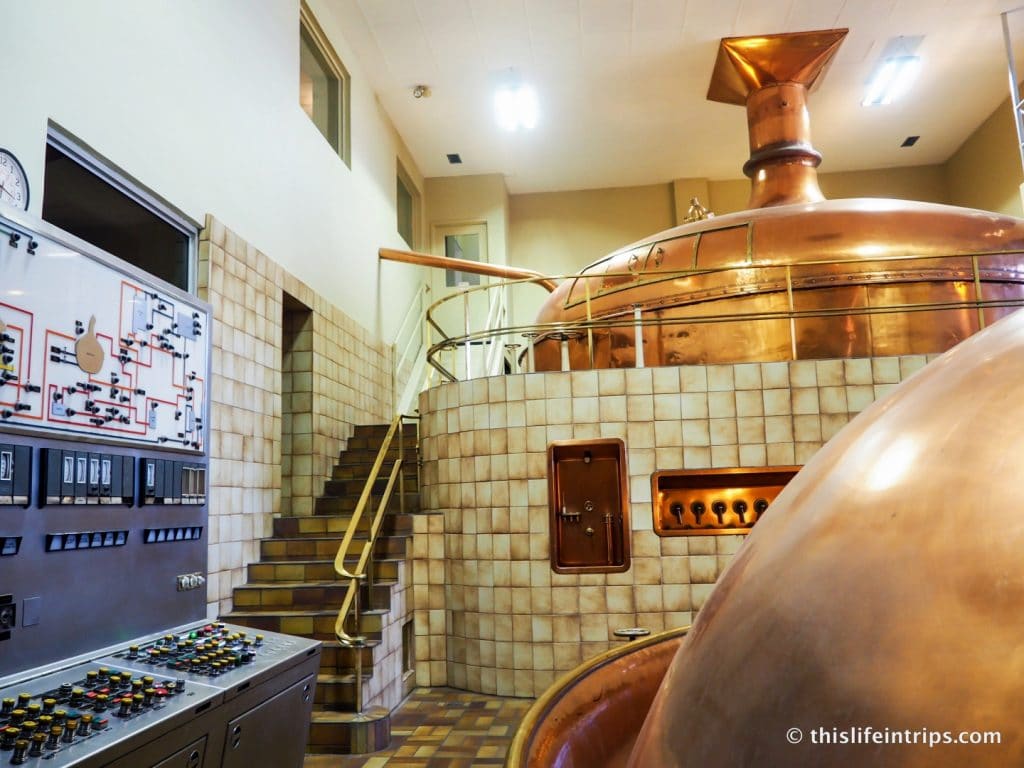 Standing next to the original giant copper kettles, our Moosehead brewery tour continued on to the operation side. Cold pilsner in hand, one of several speciality beers brewed for Canada’s (and Moosehead’s) birthday, our tour guide took us through the changes in the company’s brewing process over the years. Although the copper kettles are no longer in production, two of the 100 or so buttons on the 60’s built and once high-tech computer system, is.

There our guide went on to share how Moosehead is said to have helped the world of brewing with the invention of a whirlpool system that is used in 98% of breweries on the planet. Sadly, Mr Hudson, the Moosehead employee and inventor, never filed a patent for this in-house invention and as a result, has little to show for his success.

At least he is recognized on this Moosehead brewery tour… 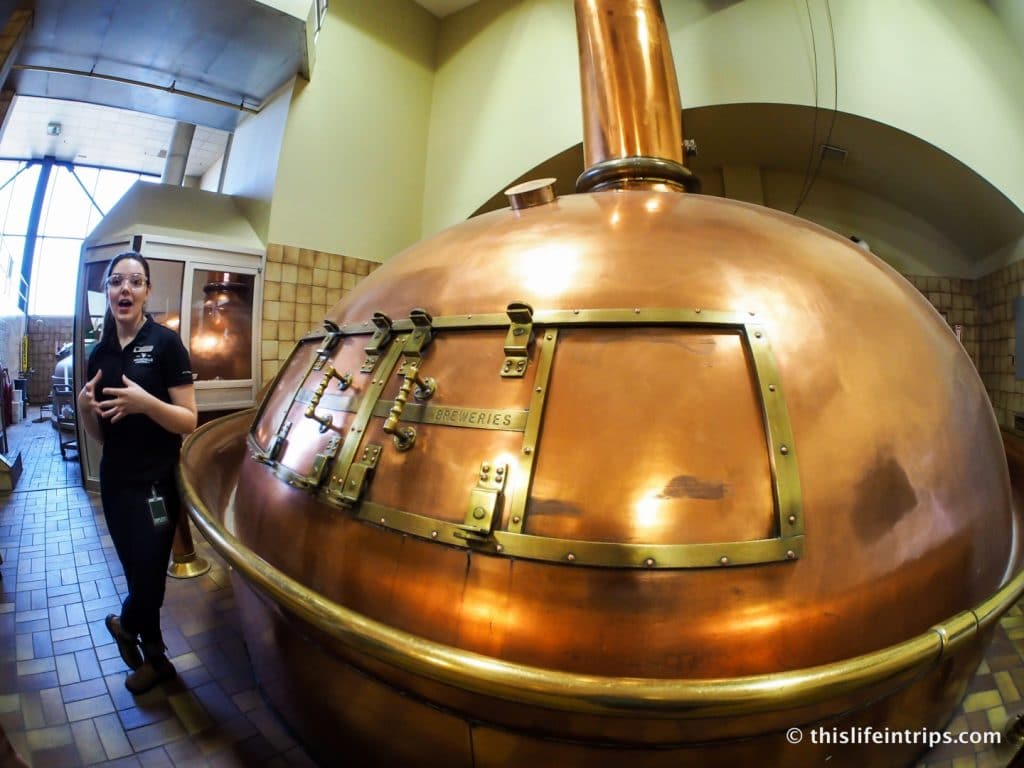 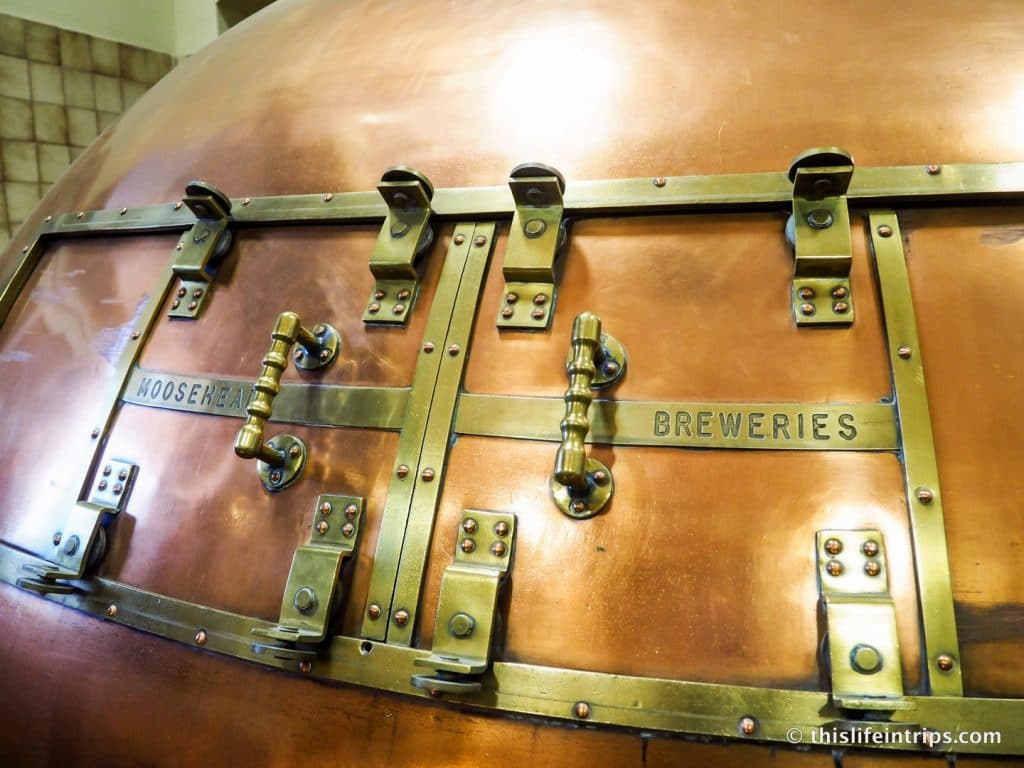 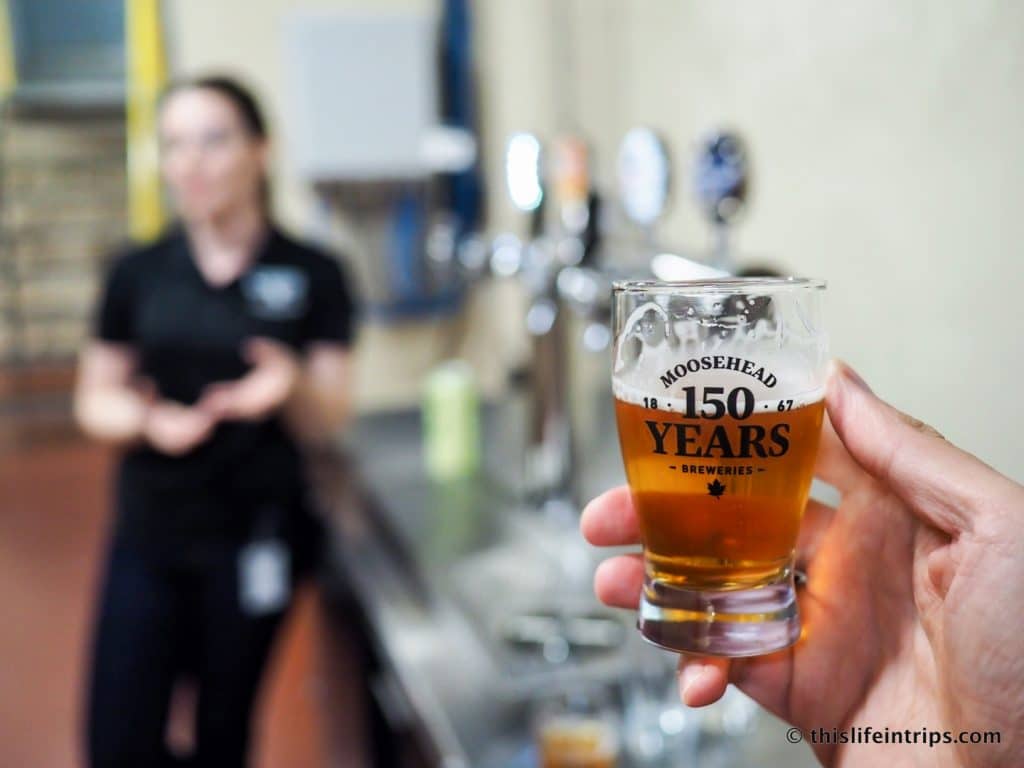 As our Moosehead brewery tour moved from the chill room where we talked and tasted unfiltered beer from the source to the massive brewery floor, I realized just how big this company is. It’s $28 million bottling facility is capable of pushing out 1000 and 12,000 bottles and cans a minute respectively. Clearly, this company is no joke.

Still, with the rise in popularity of craft beer across the country and beyond, Moosehead is not immune to the consumer’s ever-changing pallet. Thankfully, Moosehead knows this. In an effort to enter the space of craft beer, Moosehead purchased a small Brampton brewery. This turned into Hop City.  Also, to celebrate its shared Canadian birthday, Moosehead released several special batches showing they are much more than a famous green bottle.

On top of that, Moosehead is working on producing limited release small batches at its Saint John facility. There is also a new tasting room in the works. Yes, these are exciting times ahead for Moosehead and its customers.

At the end of our Moosehead brewery tour, our guide noted that they have only been operating for ~14 months. With such a unique and interesting story this was surprising to me. Not to mention the production and behind the scenes access the tour gets you.

All in, this is a great brewery tour..and I have done a few! Moosehead offers a peek into Canada’s beer-making past as well as its bright future. Highly recommend for beer lovers and anyone lucky enough to be visiting this great part of Canada’s east coast.

What say you?
Thoughts on this Moosehead Brewery Tour review?
Let’s hear it! 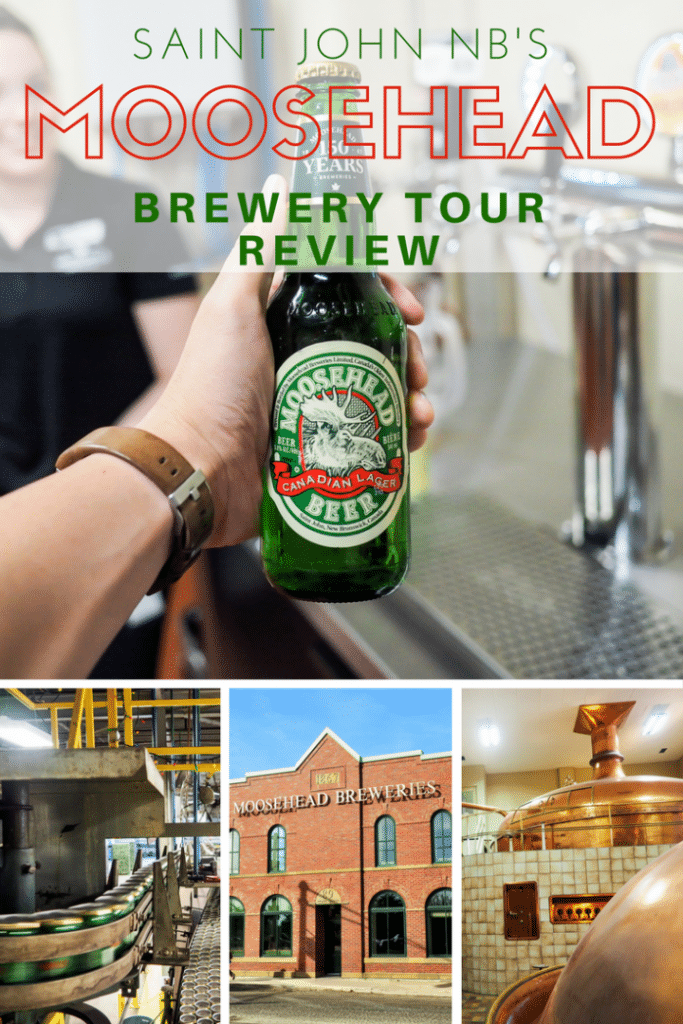 Although this Moosehead brewery tour review was made possible by Tourism New Brunswick / Nouveau-Brunswick,
the experience, opinions, and Canadian insight were my own.