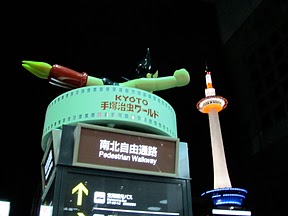 Within minutes of arriving in Kyoto, I was already impressed with the place. We exited the Kyoto train station and were greeted by my favorite childhood robot, Astroboy. Yay Kyoto!

Our hostel was great and added to Kyoto’s charm. Like our place in Hiroshima, it was a traditional ryokan however this time we opted to share a family room. The room and building was definitely traditional. Small hallways, narrow stairs, and sliding paper doors made this stop that much better.Sharing the room made it feel like we were 10 years old and having a sleepover with some friends.Gone were the sleeping bags, replaced with thin mats on the floor. It was cozy to say the least. We spent a good half hour trying to figure out what was the best sleeping arrangement…head to head, toe to toe, foot to face etc… Once that was sorted we enjoyed some green tea and then some great plum wine that we brought from Hiroshima. Yes just like a 10 year old’s slumber party except with stronger booze. 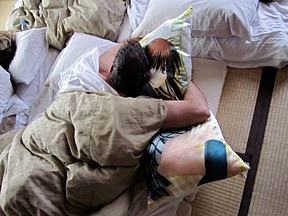 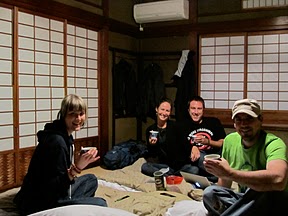 If only these pillows existed when I was 10 years old…

We were told Kyoto is a beautiful city. We were told Kyoto has amazing temples and sights. We were told that 2 days would not be enough. For some reason all of that never sunk in. Being known as “the city with a thousand temples” should have clued us off. We set off on our first day not really knowing what to expect. After weaving up the very busy Matsuba street, stopping in dozens of shops along the way, we arrived at the gates of Kiyomizudera temple. This is one of Japan’s most popular Buddhist temples and with good reason. From there you are presented with amazing views of the area and Kyoto. There are endless things to see on the grounds but what the temple is most famous for is the large expanding decks and a waterfall that is said to bring health, wisdom and longevity. Very cool. 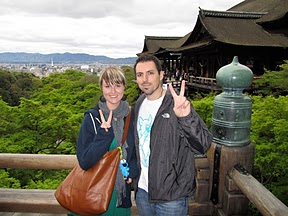 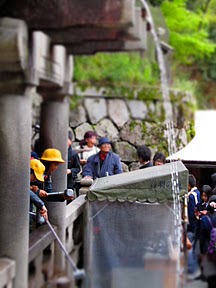 One other very cool thing we did was Mother Buddha’s womb in the Zuigudo hall. This self-meditating/reflecting exercise sees you walking down into the basement of the hall in pitch black and being guided by a rope on the wall to a large, dimly lit stone. Once at the stone you spin it and make a wish. This would have been an incredibly relaxing a self-fulfilling experience if it wasn’t for Hollywood. The entire trek through the dark filled my head of cobwebs, strange bugs, and booby traps.I was too busy being scared to really enjoy the experience. Thanks a lot One Eyed Willey.When we emerged Justin and I found out that Erin and Allison were too freaked out to even turn the stone. As soon as they saw light they were gone. We collected our nerves and carried on through the rest of the grounds then made our way back down the hill, stopping in a dozen more shops on the way. 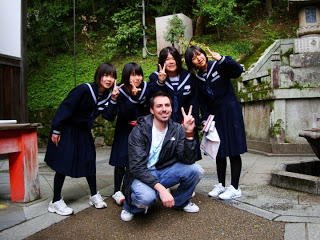 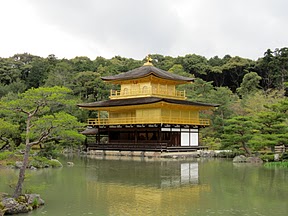 After passing by a few other temples we made our way to Kinkaku-ji, known as the Golden Pavillion. This very pretty, very shinny temple was originally built as a retirement home. It was rumored that MC-Hammer was going to purchase the property prior to going flat ass broke. 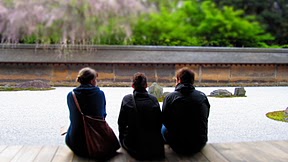 While enjoying the views we were mobbed by school children on a field trip.Their assignment was to interview tourists to practice there English…or report to the government.They were very nice so we participated. When asked to write something in there journal Justin wrote “My name is Justin and I like to party.” Naturally I followed suit. 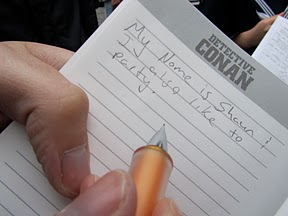 Children on field trips seemed to be a big thing that day as at the Kiyomizudera temple 90% of the visitors were school kids. At one of the bamboo pools I was swarmed by a group of schoolgirls wanting my picture. I think they mistaken me for Godzilla. 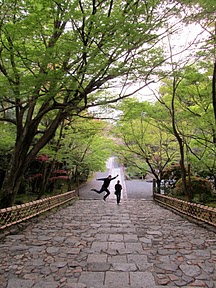 Next up was Ryoan-ji which houses the largest Zen rock garden in the city. The steps leading up to it gave me one of my favorite pictures of the trip. See right. The temple and garden is amazing and one of my favorite sights. The calmness of it all absolutely reeked. It burned the nostril…but in a good way. We sat and reflected in it for as long as the cool late spring,late afternoon, would let us bear. 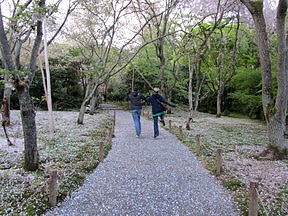 We continued on around the grounds. More peaceful and relaxing green space followed. At this point the beauty of it all was really starting to piss me off. Where do you get off Kyoto? We get it. You’re pretty. Now you’re just bragging.

After frolicking in a field of cherry tree petals we headed out for some eats.For a late lunch we ate roman noodles that was ordered and paid for through a vending machine. What a country! 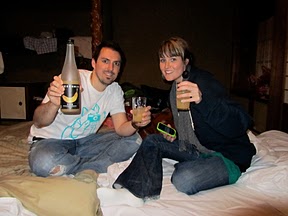 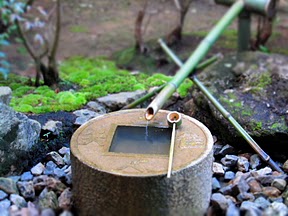 That night we polished of the plum wine and headed out in search of real Geisha’s. I was not (and still not) completely sure what a Geisha is. Traditional prostitute keeps coming to mind however Erin kept saying otherwise. I’m still not convinced. We walked through the Geisha district for a good fifteen minutes with out a “sighting” About the time I started to loose hope (and interest) Erin shouted “I see’s one!” and proceeded to point.Sure enough across the road a white-faced lady in full on traditional clothing shuffled her way down an alley and out of sight. It was as if we had seen a ghost. As we walked further we began seeing them in greater numbers. Some scurrying to appointments, some from. We even saw one with a group of drunken businessmen. It was strangely fascinating. I was unsure of protocol so I didn’t take any pictures. Part of me wondered if they would even show up in a photo. 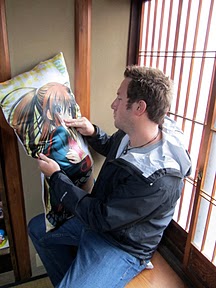 As we headed back to the hostel we passed by another traditional Japanese sight, the love hotel. These hourly rental rooms are exactly what they sound like they are. They are scattered throughout Japanese cities so we had surely passed by them already. This one just happened to be called “Love Hotel” and we actually saw a couple walk into it. I was taking a slow shutter speed picture of the building as the couple was walking in. It would have been a cool picture as it would have shown a blurred trail going into the hotel however Erin was freaked out that I was taking their picture so she stepped in front of me. Best picture ever…in my mind. 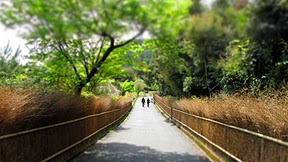 The next morning we said our goodbyes Rin. She had become somewhat annoying to carry around and therefore was not the ideal travel companion. Truthfully I think Justin was feeling better so her job was done. That and she fell for the front desk clerk. When Justin said he was leaving her in the common area as a gift for the hostel the front desk clerk grabbed her and put her behind his desk. Hmmmm… 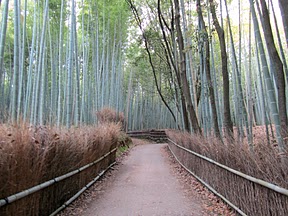 Before our afternoon train we made our way out to the bamboo forest, which is a series of trails through the woods. Again Kyoto, we get it.

After seeing the Togetsukyo Bridge we said our good byes to the city and headed for the train station. From there we were sped away from one of the most beautiful cities we will ever visit. Move aside Elk Point Alberta, you have been dethroned.