With summer winding down Shaun and I decided it was time to squeeze in one last random weekend escape getaway. Originally hoping to stay local, the weather wasn’t looking promising so we started to check out options south of the boarder and discovered that an Everett weekend escape, about 40kms North of Seattle, was looking good as they were hosting their Annual Craft Beer Festival. Sold! After inquiring the organizers offered us free admission which equaled a lot of free beer. Double sold!!

On top of the craft beer feast there were several other events during that Everett weekend which included  Luftwaffen Days at the Flying Heritage Collection Museum, a Vancouver Canadians game, a fun run, and a food cart festival. No shortage of things to do on this Everette weekend escape. Of course, this also meant that every decent hotel was booked – EconoLodge it is!

We headed straight into town to find a place to watch the Seahawks game. We drove around downtown and quickly realized Everett wasn’t exactly a ‘happening’ place. Seriously though – where is everybody? We finally settle on this charming little dive called “Lucky Dog Sports Bar”. This place has everything I love about small town bars – dartboards, old drunk locals, a friendly bartender, and PULL TABS. Best. Oh, and the Seahawks won. Go sports!

The rest of our night involved a gas station snack run and unknowingly breaking into a closed Wendy’s only to be rewarded with Junior Bacon Cheeseburgers and delicious frosties. Not part of our Everett weekend plan but a perfect date night none-the-less.

As if the Craft Beer Festival wasn’t exciting enough, the Flying Heritage Collection museum (a privately owned collection of historical airplanes) was having a free fly day on that Everett weekend – featuring planes used by the Luftwaffe during WWII. It was pretty amazing to see (and hear!) this piece of history take to the sky. 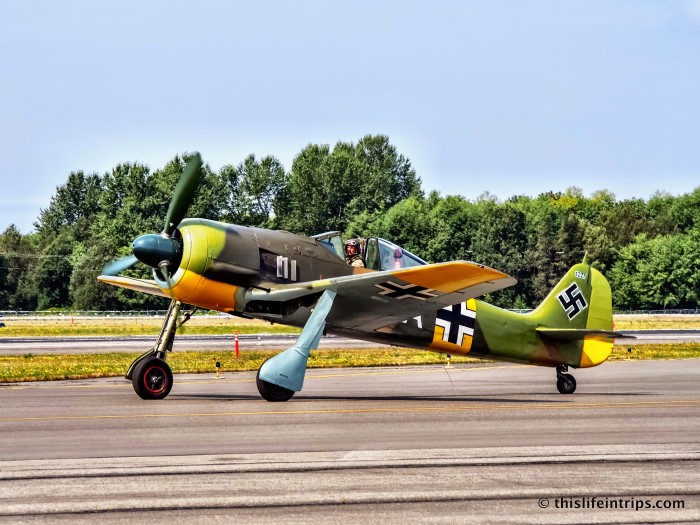 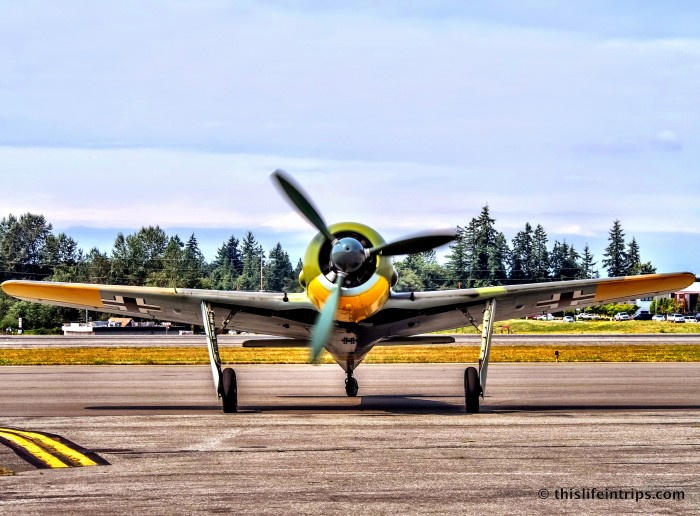 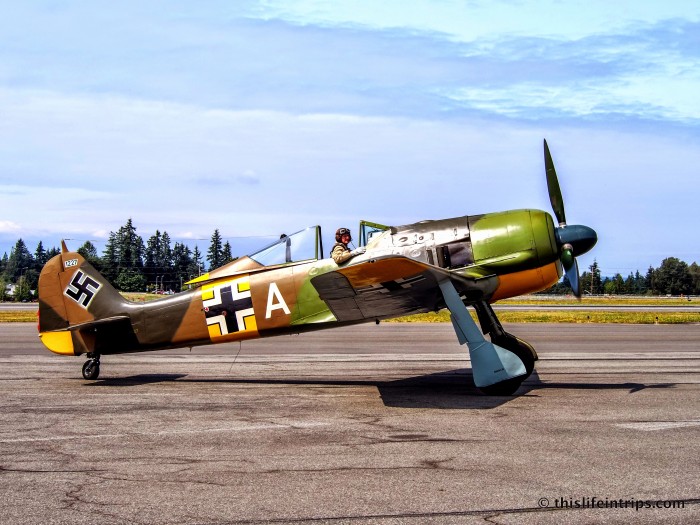 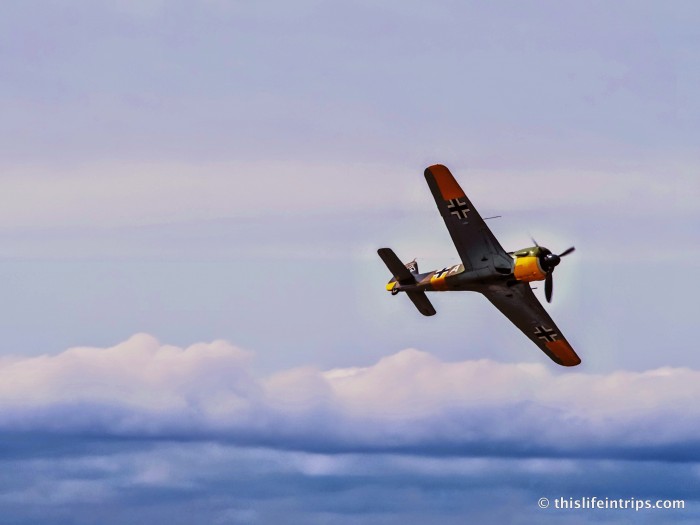 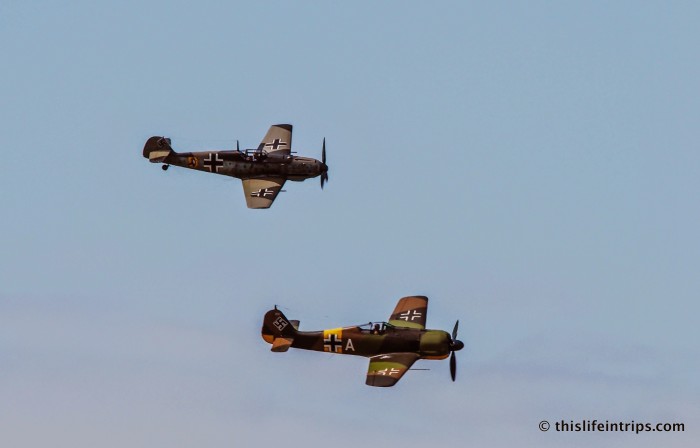 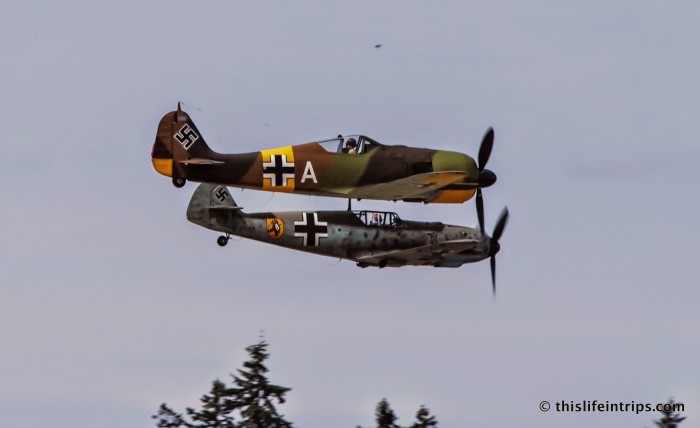 Afterword’s, we toured the rest of the incredible collection – featuring everything from Japanese Zeros to British Spitfires. Almost all of the planes there have been restored to their original flying condition and some of them are the only of their kind in the world (but they don’t fly these any more because of their rarity). Definitely recommend checking this place out if you ever find yourself visiting on an Everett weekend (or weekday!) 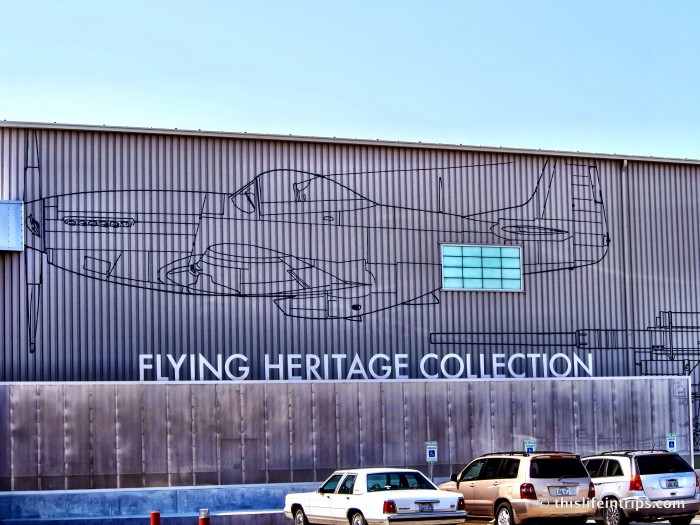 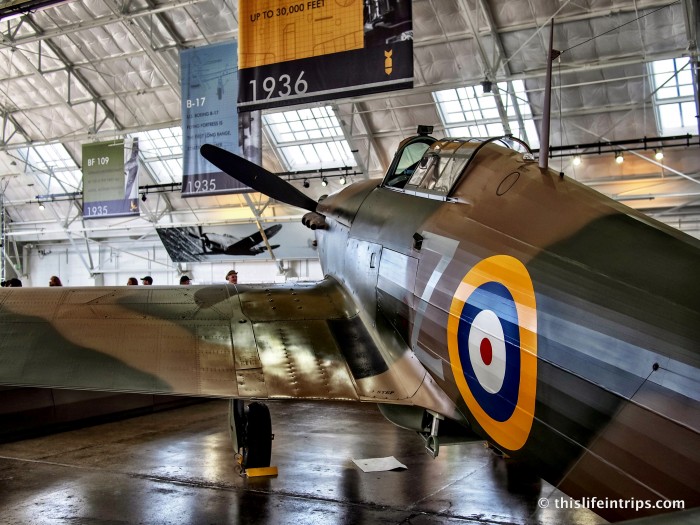 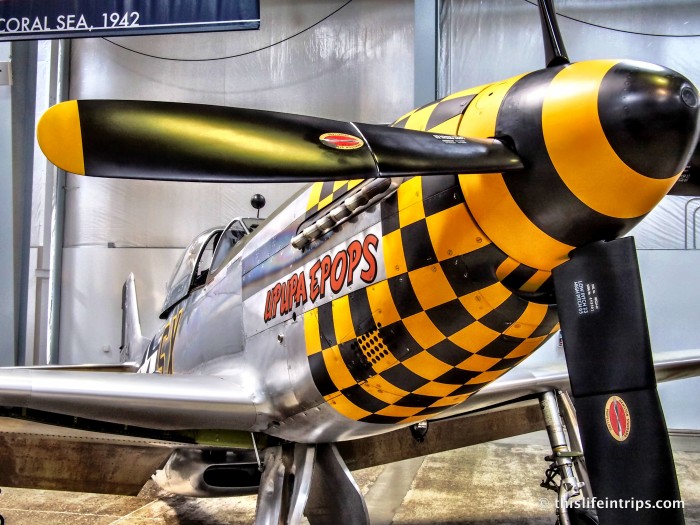 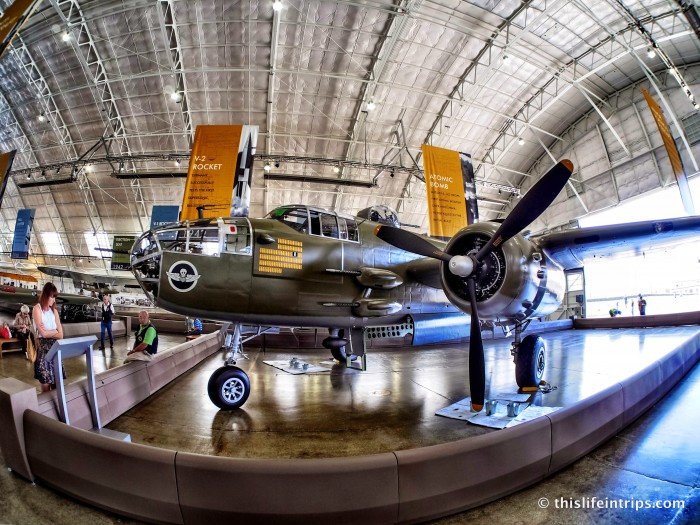 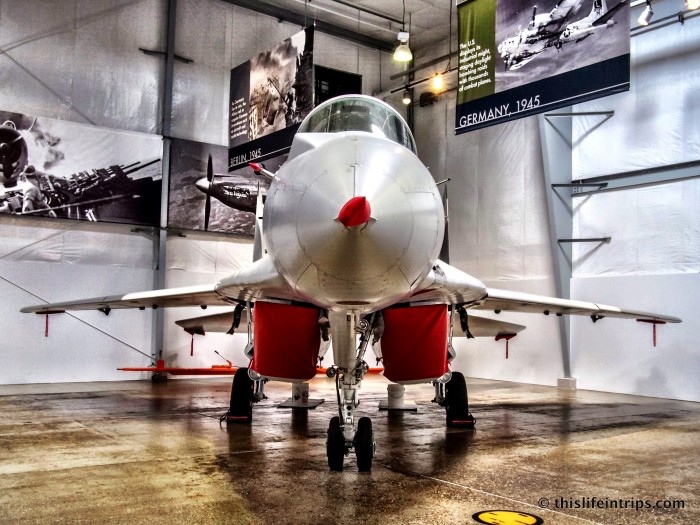 Before heading into the Craft Beer Festival, we made a quick stop at Café Zippy for a coffee and a snack – a cute little local place that focuses on organic and local fare. Coffee with a side of adorable Dalmation? Yes please.

Just outside there was a couple interesting public art installations. One was a typewriter, the other a piano. You can find these pieces throughout Everett and are a nice touch. The idea behind the typewriter is to answer daily questions which are then shared on social media. The pianos are just for playing which is great. Walking around the quiet downtown core throughout our weekend escape we could hear people, young and old, plunking away. 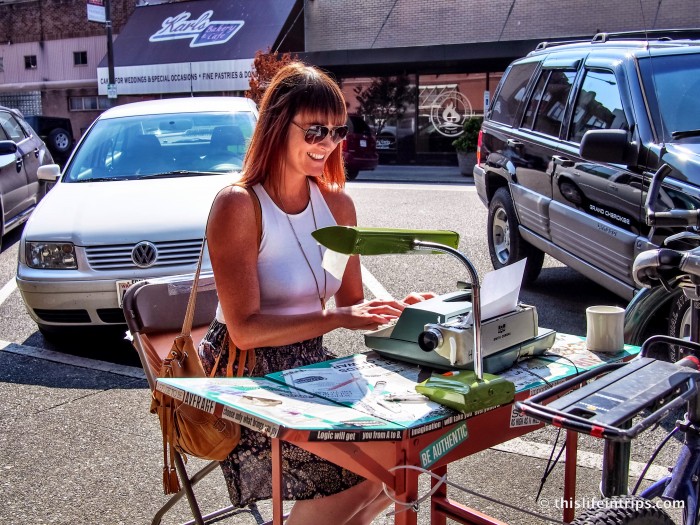 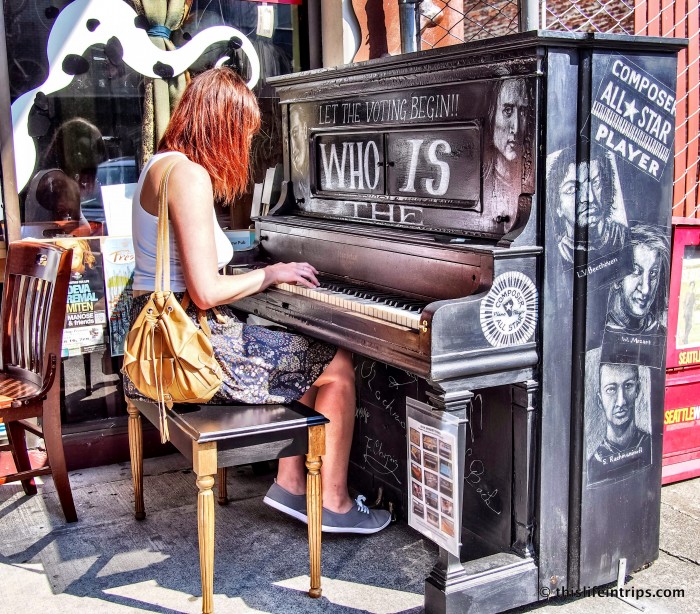 The main attraction to our Everette weekend escape. It was a warm day and we arrived at the festival excited to try to some local brews. The festival features 30 Breweries pouring 100+ beers – and this years theme was “Fruit Beers” (other beer options also available). It was well organized and we were provided with a brochure that included a description of each of the beers along with our tasting glass and 6 tokens. Additional tokens were 4 for $5. There was live music featuring 3 different bands throughout the day. While we didn’t get to try them all (although we tried a lot) there were definitely some good beers to be found. Overall we did feel there was a reoccurring theme of “trying too hard”…but perhaps we are just spoiled by the incredible craft beer scene here in Vancouver 🙂 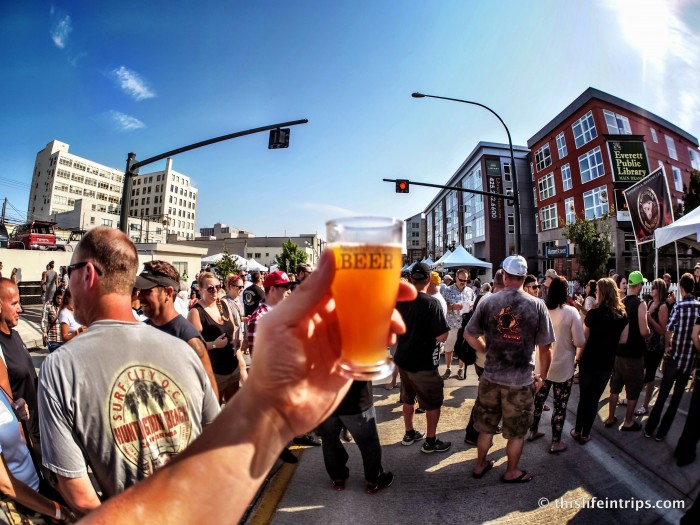 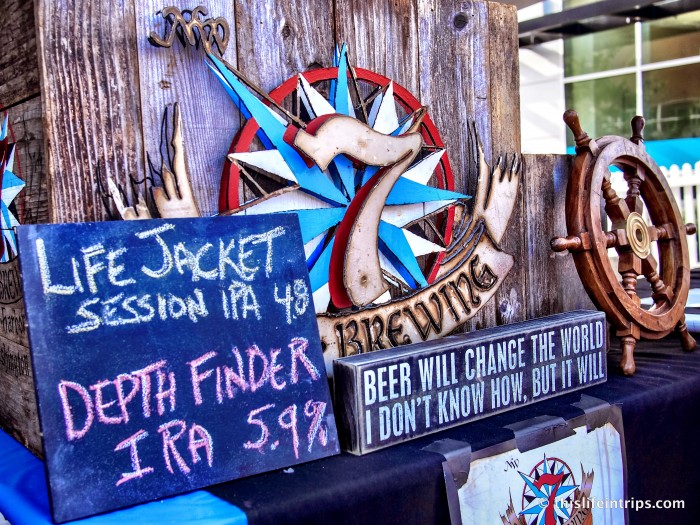 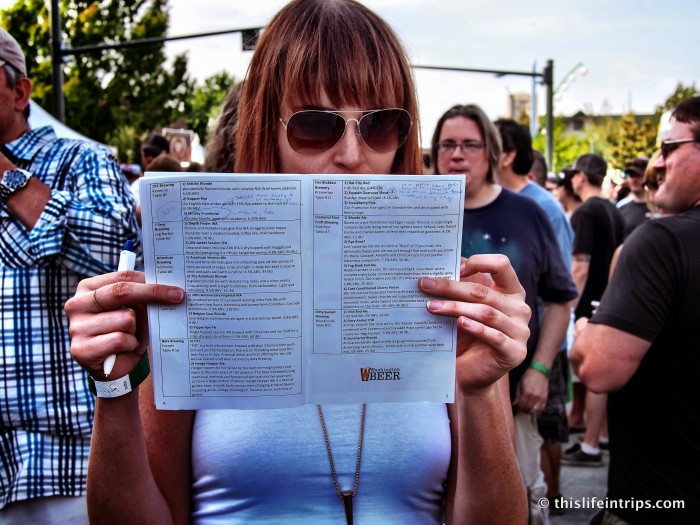 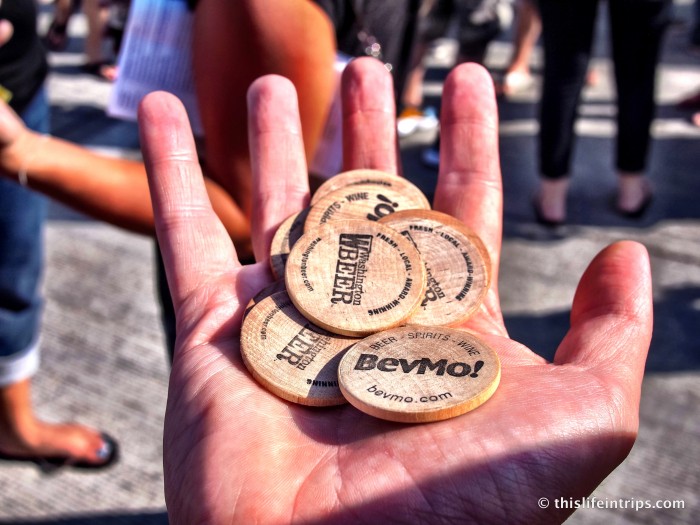 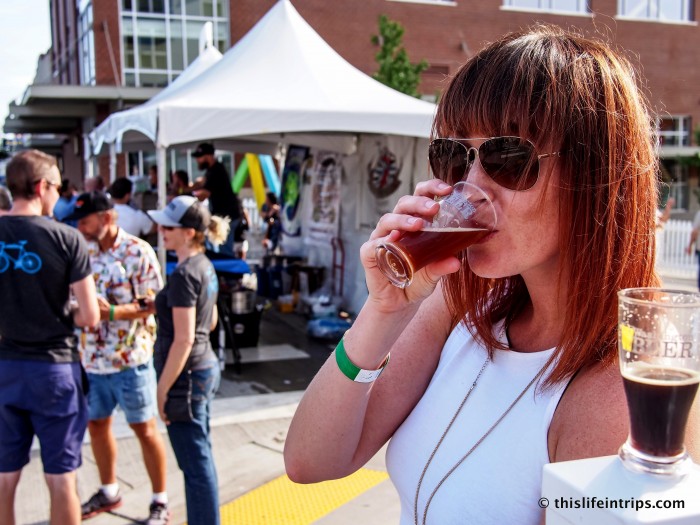 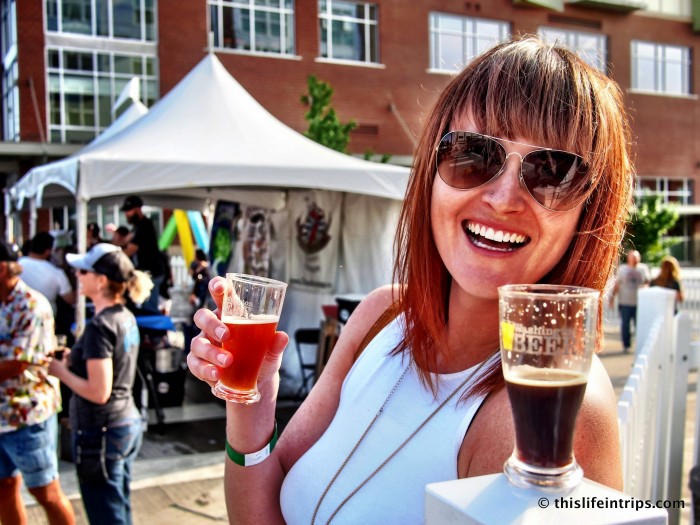 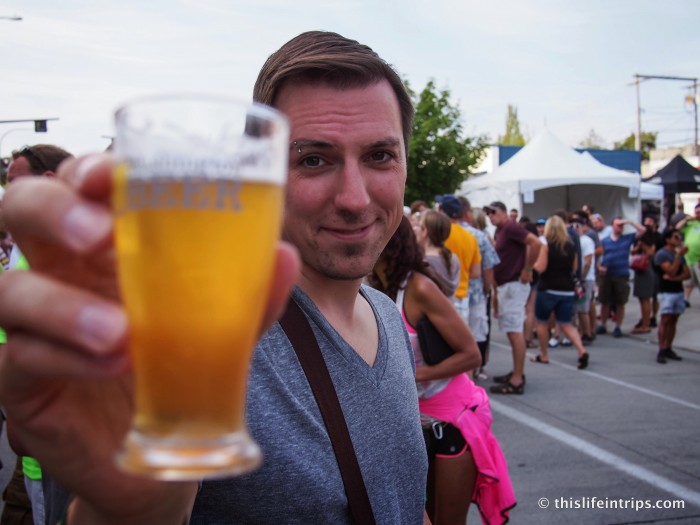 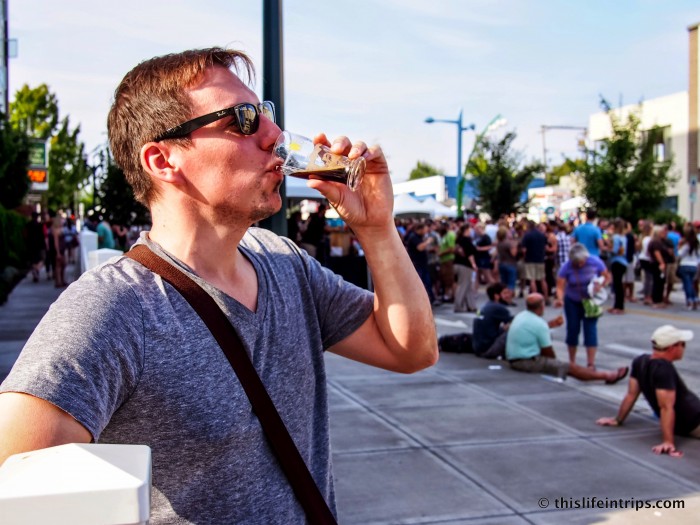 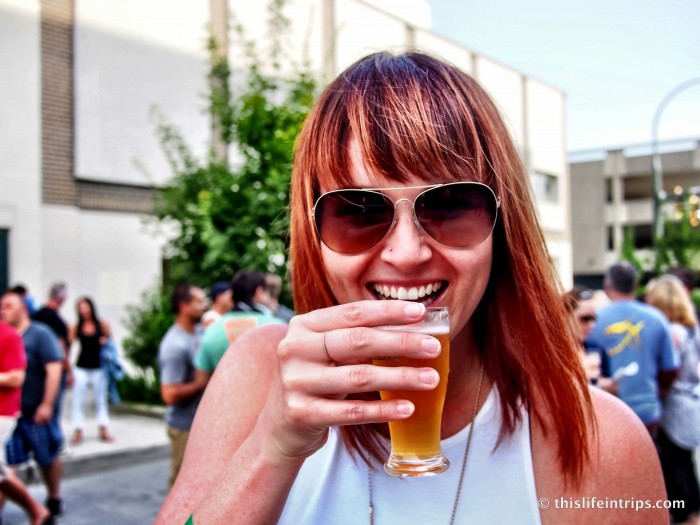 This once was a big NO from both of us. It honestly tasted more like medicine then beer. Hopefully their other brews are better.

AWARD: Most likely to be mistaken for Dimetapp.

Pucker up! I’m into sour beers, but this one was WAY too sour. Best part was when I convinced Shaun it wasn’t the sour beer and watched him take a sip. I win.

Not sure if Shaun liked this one…I’m trying to read his notes, but he’d had a lot of beers at this point and I can’t read his handwriting.

This was one was a refreshing change from the powerful flavours of some of the other beers. It was definitely a traditional stout.

Night Owl Pumpkin Ale – Brewed with over 7lbs or pumpkin per barrel. Bitter with Magnum hops and spiced with nutmeg, clove, cinnamon, ginger, and allspice.

This beer drank more like a cider and had similar flavours to a pumpkin-spiced latte. Good…if you are into that type of thing.

Good – but an unpleasant raspberry after-taste.

Big no on this one. Tasted like a Hawaiian tropic poured into a Guinness.

This one had lots of potential, but wasn’t executed very well. Another sad case of trying too hard.

Good. A decent amount of hop.

This one was also good – just the right amount of tart. Refreshing.

Good….but no idea what the fruit was.

Same with this one – with a lot of other breweries trying too hard, this was a case of maybe not trying hard enough.

Ooo! This one was surprisingly spicy. Definitely more of a novelty beer, but I enjoyed it.

Evo IPA – This IPA is infused with pineapple and jalapeño via a Randall.

I loved this beer! Definitely not for session drinking, but just the right amount of spice and sweet.

Tasted more like a boozy chai tea then beer, but definitely tasty.

This had just the right amount of sour. Love a good saison. Easily one of my favorite beers.

Coincidentally, our beloved Vancouver Canadians were in town that Everett weekend to play the Everett Aquasocks so we obviously weren’t going to miss that. After a delayed start (the Canadians were delayed crossing the boarder) we got to enjoy a good game where the right team came out on top. We also ate our weight in the deliciousness known as Kettle Corn. Best. 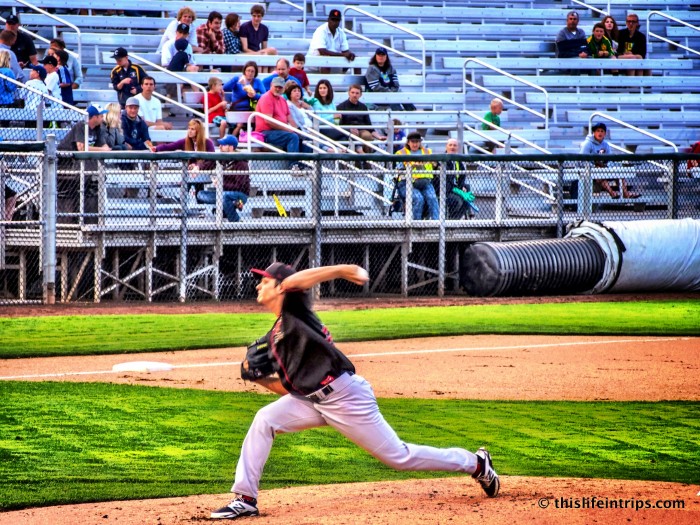 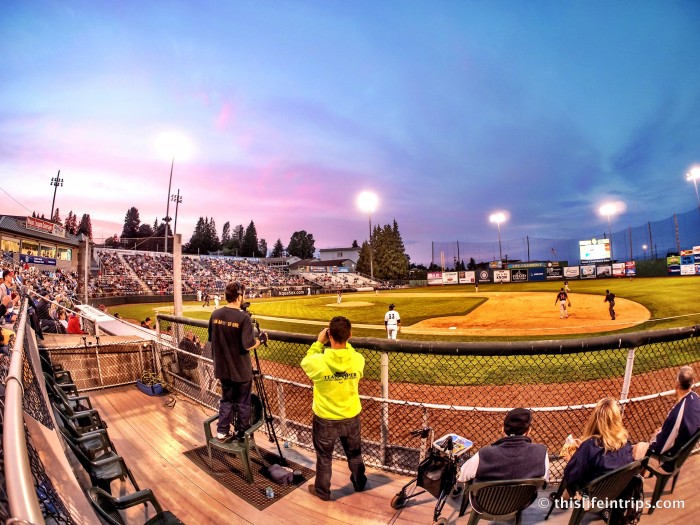 
Not interested in hanging out at the luxurious EconoLodge, we got an early start with breakfast at the Everett weekend food truck festival. This event featured a collection of street food vendors in downtown Everett and made for a good way to say bye.  We decided to take our time getting home and stopped at Sudden Valley Golf Course just outside Bellingham for a quick round. Definitely one of the most beautiful courses I’ve ever gotten to play. Almost made up for one of the worst rounds of my life. Good thing my favourite part of golf is the beer and driving a cart around so I can’t complain. 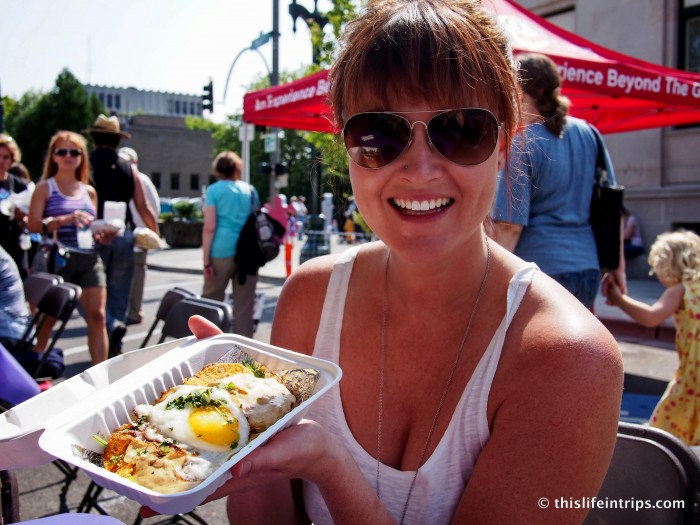 For a last minute plan, it was a really fun (and random) Everett weekend escape…but we won’t be rushing back to again any time soon.


A little bit of Japan right to your front door!